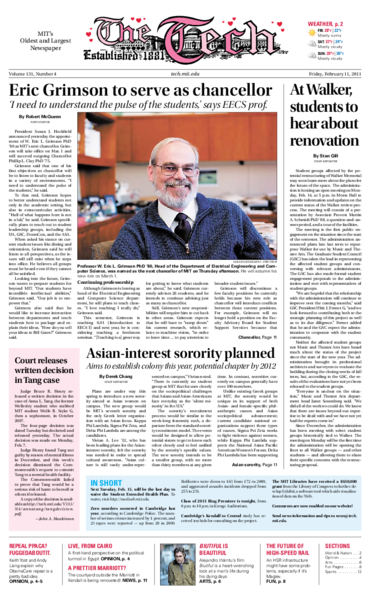 Plans are under way this spring to introduce a new sorority aimed at Asian women on campus. The new group would be MIT’s seventh sorority and the only Greek letter organization with an Asian focus. Kappa Phi Lambda, Sigma Psi Zeta, and Delta Phi Lambda are among the candidates. 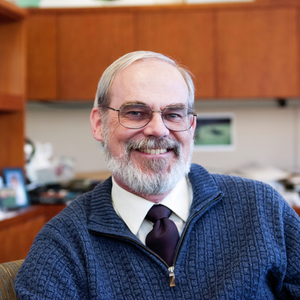 Eric Grimson to serve as chancellor

Five current and former UA presidents joined forces to write a letter addressing the administrative shortcomings in efforts to engage students on campus issues. The letter argued that the Task Force on Student Engagement (TSE) has failed in its mission of involving students in three important decisions from the past two years — cutting varsity sports, increasing enrollment, and restructuring dining.

Judge Bruce R. Henry released a written decision in the case of Anna L. Tang, the former Wellesley student who stabbed MIT student Wolfe B. Styke G, then a sophomore, in October 2007.

At Walker, students to hear about renovation

Student groups affected by the potential restructuring of Walker Memorial may soon learn more about the plans for the future of the space. The administration is hosting an open meeting on Monday, Feb. 14, at 5 p.m. in Morss Hall to provide information and updates on the current status of the Walker review process. The meeting will consist of a presentation by Associate Provost Martin A. Schmidt PhD ’88, a question-and-answer period, and a tour of the facilities.

Construction in plaza outside Marriott to continue until June

Construction in the Cambridge Center Plaza, in front of the Marriott Hotel and next to the MIT Coop in Kendall, has been happening every day from 7 a.m. to 4 p.m. since Jan. 6.

US faces stark choice as Mubarak clings to office

WASHINGTON — President Hosni Mubarak’s refusal to step down Thursday, after a day of rumors galvanized the crowds in Cairo, confronts the Obama administration with a stark choice: Break decisively with Mubarak or stick to its call for an “orderly transition” that may no longer be tenable.

Iraq offers to bring its refugees home from Egypt and Yemen

BAGHDAD — As unrest shakes Egypt, Iraq is seizing the moment to make an audacious pitch to thousands of its citizens living abroad: Come back — we’re stable by comparison.

The federal Department of Agriculture unveiled a new plan Thursday to manage the national forest system that government officials said would give them more flexibility in responding to modern stresses like climate change while also heading off lawsuits.

WASHINGTON — Kevin M. Warsh, who was the Fed’s chief liaison to Wall Street, will resign from the central bank’s board at the end of March, giving President Barack Obama yet another chance to leave his stamp on the Fed.

With airlines imposing fees for checked bags, priority seating and access to airport lounges, finding a good fare is just the starting point. Ticket buyers then need to check multiple websites to figure out the best deal.

BRUSSELS — The sexual abuse crisis in the Roman Catholic Church in the Netherlands deepened Thursday when news reports said one of its senior figures had shielded a pedophile priest. 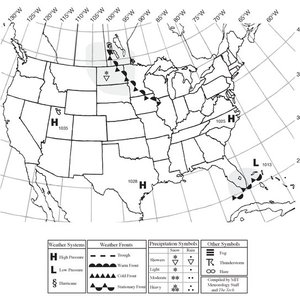 After a seemingly endless string of strong winter storms during January and the first week of February, the quiet weather this past week has been a welcome reprieve. January was a snowier- and wetter-than-average month for Boston, with 38.3 inches of snow and 4.57 inches of total precipitation (liquid equivalent), compared with normal values of 13.5 inches and 3.92 inches, respectively. The 38.3 inches of snow fell just short of the January record, which was 43.3 inches in 2005. Thankfully for those who are weary of shoveling, the quiet weather of the past week should continue through the middle of next week. There are a couple of clipper systems lined up to move rapidly through New England over the weekend, but their relatively weak strength and lack of moisture will keep any precipitation limited to a few scattered snow showers.

WASHINGTON — House Republican leaders said Thursday that they would accede to demands from conservatives and dig deeper into the federal budget for billions of dollars in additional savings this year, exhibiting the power of the Tea Party movement and increasing chances of a major fiscal clash with Democrats.

During the many hours I spent in Cairo following the recent protests, the appearance and the opinions of the protestors surprised me more than anything else. Citizens of Cairo are generally very down-to-earth, easygoing people with a great sense of humor, and this mood was evident during the protests, despite the harsh conditions. I was also surprised at the lack of animosity the protestors displayed towards the United States in light of the support and aid the U.S. has given to Hosni Mubarak’s regime in the past. Every time I got into a taxi, the driver could not wait to give me his opinion of American politics — which generally boiled down to “Bush: Bad, Carter: Good” — and assure me that he still liked America and wanted to travel to or live here someday.

Last week, I woke up with the right side of my face paralyzed. When I used some mouthwash, the right corner of my lip quivered, dripping liquid. Then I wiggled my ears (because I can): only the left ear wiggled. I looked into the mirror, and laughed at seeing my face with unmatched expressions. Then it wasn’t so funny anymore.

Last week, in a 47-51 vote, the U.S. Senate rejected an amendment to the Patient Protection and Affordable Health Care Act. Sadly, this vote will not end the Republican push to repeal ObamaCare. Going forward, Republicans are mounting a two-pronged assault on the health care reform’s individual insurance mandate before it comes into force in 2014. The first line of attack is to challenge the law in court, arguing that compelling all citizens to purchase health insurance is an unconstitutional overstep of the federal government’s powers. The second is to de-fund the agencies tasked with policing the mandate, which amounts to a de facto repeal. 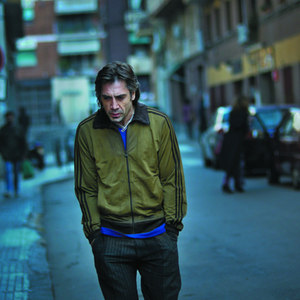 Watch the trailer. I almost cried.

The MIT Men’s and Women’s Fencing teams both won two matches at Sunday’s Eric Sollee Invitational Fencing Tournament, held at MIT. The women’s team scored a 25-2 thrashing of Yeshiva University and a 22-5 victory over Hunter College, while the men’s team took care of Yeshiva by the same score and Hunter by a 17-10 tally.

The MIT Men’s Volleyball team emerged with a 25-23, 25-18, 25-17 victory over division rivals Endicott College on Tuesday night. The nationally-ranked No. 7 Engineers raised their record to 11-2 for the year and 7-0 in conference play. MIT scored the first three points of the match and later held an 8-4 lead. Endicott countered with a 6-1 spurt which put it in front for a majority of the frame. Five ties ensued until a strike by Kenneth M. Siebert ’14 ended a long rally to give the Engineers a 21-20 edge. A kill from William B. Evans ’14 increased the margin, which prompted a timeout from the Gulls. After the break, both sides traded points, and another Siebert blast closed the set. Endicott jumped out to a 6-3 advantage in the second game, but MIT responded with a 9-3 run to pull ahead. The Gulls capitalized on several miscues by the Engineers, tying the set at 13. An Endicott service error followed by an ace from Siebert gave MIT some breathing room. However, both squads exchanged serves as a kill from Endicott’s Jeremy Siden brought the Gulls within one point. MIT countered by registering an 8-2 run to wrap up the set. 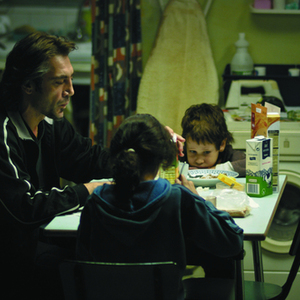 Uxbal’s center of being lies with his children.
courtesy of getty images 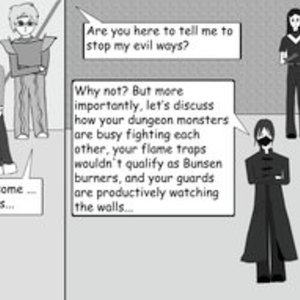 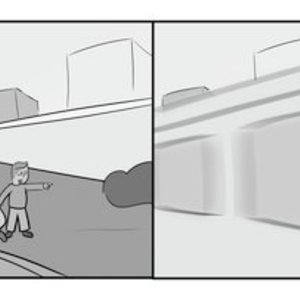 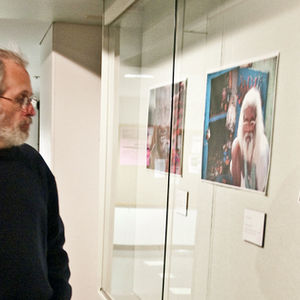 Dhaval D. Adjodah ’11’s photography is on display in the Jerome B. Wiesner Gallery in the Student Center. Adjodah’s work focuses on scenes from India and will be up until Feb. 28.
Sarang Kulkarni—The Tech

Professor W. Eric L. Grimson PhD ’80, Head of the Department of Electrical Engineering and Computer Science, was named as the next chancellor of MIT on Thursday afternoon. He will assume his new role on March 1.
Sarang Kulkarni—The Tech
All Photos From Issue