Wyatt L. Ubellacker ’13 was named to the third team of COSIDA’s Academic All-America program. As a swimmer, Wyatt earned a spot on the at-large team — the most competitive team that includes student athletes who compete in a variety of sports, including swimming and diving, men’s volleyball, tennis, lacrosse, field hockey, and fencing. He was named to the First Team All-District, which includes all New England states, New York, and several Canadian provinces.

Battling injuries, missing teammates and youth, the MIT Men’s and Women’s Fencing teams placed third overall in the combined results at this weekend’s New England Intercollegiate Fencing Championships (NEIFC) at Mount Holyoke College. The men’s three weapons combined for a fourth place finish in the 12-team field, while the Tech women were third in the final rankings of 15 women’s schools. 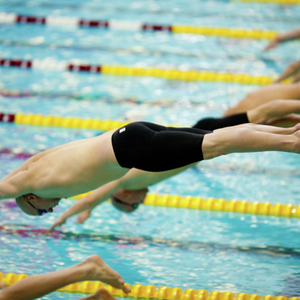 On the strength of seven first-place finishes, MIT increased its lead during Saturday’s finals session in the New England Women’s and Men’s Athletic Conference (NEWMAC) Men’s Swimming and Diving Championship. The Engineers raised their total to 769 points while the U.S. Coast Guard Academy maintained its position in second place with a tally of 517. Springfield College continued to rank third with 346 points.

For the first time in school history, MIT took first place at the NEWMAC Women’s Swimming and Diving Championships. With this win, the Engineers put an end to Springfield College’s 10-year reign as league champions. Over the course of the weekend, nine NEWMAC Championship records fell at the Mount Holyoke College Natatorium.

The MIT Men’s and Women’s Fencing teams both won two matches at Sunday’s Eric Sollee Invitational Fencing Tournament, held at MIT. The women’s team scored a 25-2 thrashing of Yeshiva University and a 22-5 victory over Hunter College, while the men’s team took care of Yeshiva by the same score and Hunter by a 17-10 tally.

Swim and Dive fall to Amherst

The MIT Swimming and Diving teams took to the pool against Amherst College on Saturday. Despite strong efforts, neither the men’s nor women’s team were able to come away with a victory. The losses were the first of the season for both teams.

The MIT men’s and women’s fencing teams competed at the Brandeis Invitational last weekend. The women went 4-1, and now have nine match wins on the season, while the men went 1-4 to get their fourth match win.