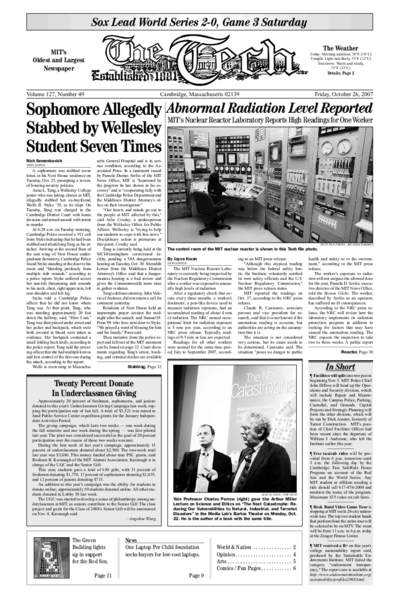 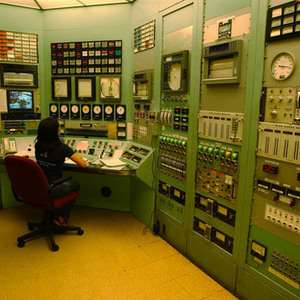 The MIT Nuclear Reactor Laboratory is currently being inspected by the Nuclear Regulatory Commission after a worker was exposed to unusually high levels of radiation.

We are deeply troubled by this violent act upon one of our students. We are supporting him, his family and friends, and others in our community. We are heartened by the progress he has shown in his recovery.

On the above date and time I was assigned to Car #3 along with Officer Caulfield. We were dispatched to #500 Memorial Drive #246 on a report of a stabbing. This is an MIT dorm building with multiple dorm rooms on several floors. While in route we were up dated by ECC that the suspect was a female who is the ex-girlfriend of the victim. ECC provided us with her name, Anna Tang an Asian female and that she was wearing a black coat. We were also informed that Ms. Tang may be on foot as she does not have a vehicle.

In a major strategy shift, the Cambridge, Mass. foundation that plans to provide laptop computers to poor children around the globe is asking wealthy individuals and corporations to help pick up the tab by purchasing hundreds or thousands of the machines.

A sophomore was stabbed seven times in his Next House residence on Tuesday, Oct. 23, prompting a review of housing security policies.

Sensing a political advantage, Democrats rushed Wednesday to move a health care bill for children back to the House floor after making minor changes to win over more Republicans.

U.S. Ambassador Ryan C. Crocker said Thursday that Iraq should disrupt supply lines and develop a “lookout list” of senior leaders for the Kurdish guerrillas who use the northern Iraqi mountains as a haven for attacks inside Turkey.

The rapid growth of the wildfires in Southern California early this week was primarily facilitated by the prevailing weather conditions. In particular, there was an intense northeasterly wind and the relative humidity was extremely low, both characteristics of the Santa Ana flow regime. The Santa Ana wind is a regional example of the more general phenomenon of downslope flow. As the name implies, downslope flow occurs when wind is directed down a gradient of surface elevation. In the case of the Santa Ana, the wind blows from the plateau of the Mojave desert (elevation of roughly 1,000 meters) towards the Pacific coast. As the air travels along such a path, it descends and is consequentially compressed, as it adjusts to the higher environmental pressure at lower elevation. The compression results in heating of the air, 18 degrees (10°C) for every 1000 meters of descent. While the temperature of the descending air increases, its water vapor content remains unchanged, such that the relative (to temperature) humidity decreases. Hence, the downslope Santa Ana winds are necessarily accompanied by low relative humidity, setting the stage for explosive wildfire growth.

Europe, which once hoped to avoid major fallout from the summer’s credit crisis, is now feeling an autumn chill of slackening economies and warnings of further market upheaval.

President Bush toured Southern California on Thursday as investigators got down to the work of determining how one sunny fall day last weekend erupted into a 16-fire storm now in its fifth day.

Bush Says U.S. Will Not Invade Iran Despite Recent Sanctions

In announcing new sanctions against an elite unit of Iran’s Revolutionary Guard Corps, Bush administration officials took pains Thursday to offer assurances on that at least for now, the United States is not going to war with Iran.

New commercial satellite photos show that a Syrian site Israel bombed in September no longer bears any obvious traces of what analysts said appeared to have been a partly built nuclear reactor.

<i>The Tech</i>’s Oct. 16 (“Postol Speaks Against U.S. Characterization of Missile Defense Site”) article correctly described the Department of Defense report as finding that “there was no record of research fraud.” The article also correctly stated that I complained to MIT’s administration that “Lincoln Laboratory … [was] …conducting fraudulent research and exaggerating the capabilities of a missile sensor.” I believe that in spite of the accuracy of these statements, there are other facts that are also important for the MIT community to know.

The Oct. 23, 2007 news article, “MIT’s First Student Life Dean to Retire at End of School Year,” inaccurately stated that residential dining at Next House and Baker House restarted during Dean for Student Life Larry G. Benedict’s time at MIT. Neither dining hall closed during that time, and thus could not have restarted.

CD REVIEW ‘What the Hell Do I Know?’

Though Illinois frontman Chris Archibald is primarily a banjoist, his small-town Pennsylvanian quartet shares little musically with the typical genres associated with said instrument. They’ve got less in common with Sufjan Stevens and much more to do with amply rocking contemporaries Menomena. This is surely a positive likening, since Illinois is touring with Menomena through mid November.

Ira and Abby” is the classic love story — boy meets girl, girl meets boy’s parents, boy marries girl, and several montages later, they live happily ever after! The twist in this latest rendition is that Ira (played by Chris Messina) and Abby (Jennifer Westfeldt, who also wrote the film) are engaged six hours after they meet, and they are married within the first half hour. Every aspect of the film is accelerated and exaggerated, and the end result is a light-hearted movie that will appeal to some, but certainly not everyone.

Well, surely you’re all quaking in your Keds now that music file-sharing site OiNK is shut down, and maybe you’re wondering how you’ll possibly acquire and share albums with the same level of ease. Stream from MySpace? Perish the thought! Post on your public? Time-costly! Newbury comics? A fun voyage, for sure, but you might as well blow a kiss goodbye to any petty cash in your wallet as soon as you step in the door. Next best solution? Cheap concerts coming to you in the Boston area this November. They may not be as permanent as, say, torrent-quality mp3s, but at least you can always take flash photos of you and your friends in front of the stage to put on Facebook. 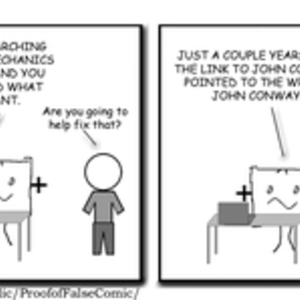 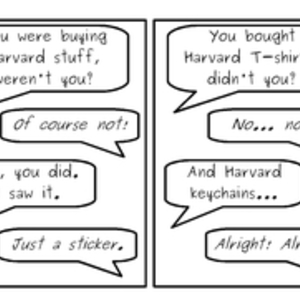 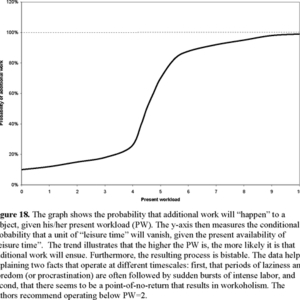 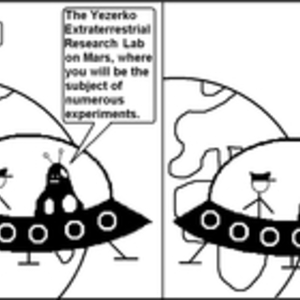 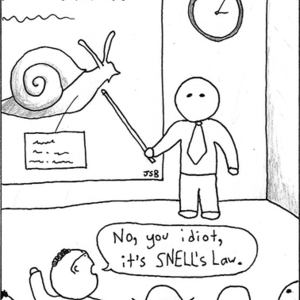 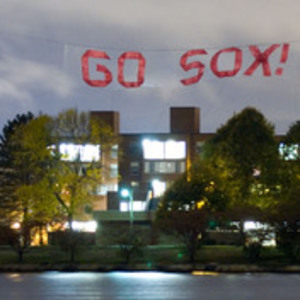 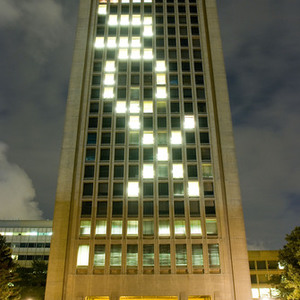 The Department of Earth, Atmospheric, and Planetary Sciences set the lights in the Green Building to display the word “SOX” on the Boston-facing side of the building in support of the Red Sox in the World Series. The ...
Ricardo Ramirez—The Tech 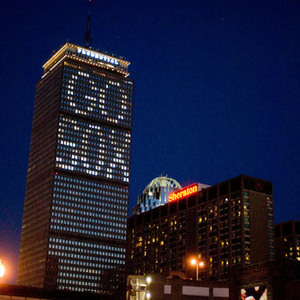 The Prudential Building is lit with the words “GO SOX” before both home games of the 2007 World Series on Wednesday night and Thursday night this week.
David Templeton—The Tech 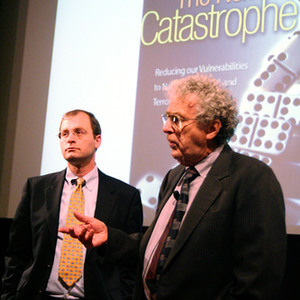 Yale Professor Charles Perrow (right) gave the Arthur Miller Lecture on Science and Ethics on “The Next Catastrophe: Reducing Our Vulnerabilities to Natural, Industrial, and Terrorist Disasters” in the Media Lab’s Bar...
Alex H. Chan—The Tech
All Photos From Issue