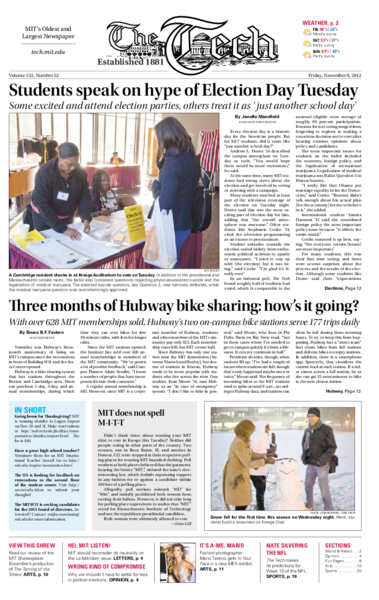 Yesterday was Hubway’s three-month anniversary of being on MIT’s campus since the two stations in front of Building W11 and the Stata Center opened.

Every election day is a historic day for the American people. But for MIT students, did it seem like “just another school day?”

Going home for Thanksgiving? MIT is running shuttles to Logan Airport on Nov. 20 and 21. Make reservations at http://web.mit.edu/facilities/transportation/shuttles/airport.html. The fee is $10.

MIT does not spell M-I-T-T

Didn’t think twice about wearing your MIT shirt to vote in Kresge this Tuesday? Neither did people voting in other parts of the country. Two women, one in Boca Raton, FL and another in Denver, CO, were stopped at their respective polling places for wearing MIT-branded clothing. Poll workers at both places believed that the garments, bearing the letters “MIT”, violated the state’s electioneering law, which forbids expressing support in any fashion for or against a candidate within 100 feet of a polling place.

Syrian opposition meets to seek unity in Doha on Thursday

DOHA, Qatar — The quarrelsome Syrian opposition was locked in extended bartering here in Doha on Thursday over the creation of a more diverse yet unified umbrella organization that its foreign backers hope will become a credible alternative to the Damascus government.

Two more presidential elections, in 2016 and 2020, will be contested under the current Electoral College configuration, which gave President Barack Obama a second term on Tuesday. This year’s results suggest that this could put Republicans at a structural disadvantage.

Iran fired on military drone in first such attack, US says

WASHINGTON — Iranian warplanes shot at a U.S. military surveillance drone flying over the Persian Gulf near Iran last week, Pentagon officials disclosed Thursday. They said that the aircraft, a Predator drone, was flying in international airspace and was not hit and that the episode had prompted a strong protest to the Iranian government.

After the first measurable snowfall this autumn, the Boston area will have better weather over the next few days. A nor’easter, moving off into the Atlantic and toward Newfoundland, was responsible for 6”+ snowfall totals across portions of interior New England. Winds also gusted over 50 mph across the Cape, whipping up mostly rain and some snow. Here in Cambridge, about 1-2” of snow was visible on grassy areas Wednesday night. The Weather Channel, which has decided to name winter storms, named this past storm after a familiar Greek goddess — Athena.

Just months after going public, Kayak Software has been snapped up by a rival.

FRANKFURT, Germany — The president of the European Central Bank expressed satisfaction Thursday with efforts to resolve the eurozone crisis, saying that members of the currency area had made “amazing” progress toward reducing government spending.

Eliot Orton traces the origins of the Vermont Country Stores’ interest in philanthropy to neighbors sitting around the potbellied stove at his grandfather’s small store in the Green Mountains and jawboning about things that needed to be done in the community.

WASHINGTON — Come January, the United States will not only face immense tax increases and spending cuts, should Congress fail to act. It will also run out of room to finance its large running deficits.

If you surf the web, watch television, or are of the rare breed that reads newspapers, you are painfully aware that we recently held a presidential election. And if you have heard any chatter on the candidates and their campaigns, I’m sure you can agree that 2012 was very different from 2008.

Speaking up for Le Méridien workers

Tuesday’s Tech ran a photo on p. 8 of the MIT Gangnam Style video’s three creators. The caption incorrectly stated that Ingwon Chae ’14, Richard C. Yoon ’13, and Eddie Ha ’13 were standing right to left. They were actually standing left to right. 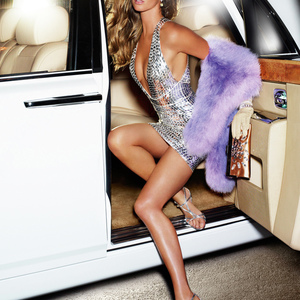 A glimpse into the world of fashion

“These images are probably the most acute examples of everything I cherish” is how Mario Testino describes his debut museum exhibition in the United States. On display at the MFA, Mario Testino: In Your Face is a collection of 122 photographs drawn from the last 30 years of Testino’s work.

How many MIT students does it take to tame the shrew?

The MIT Shakespeare Ensemble prides itself on keeping a textual interpretation of the classic works while adding a modern twist to keep the plays fresh — and this is certainly true of their latest production, The Taming of the Shrew. The play follows the story of Katherina and Bianca, daughters of the wealthy lord Baptista. Because of Katherina’s shrewish disposition and Bianca’s desirability, Baptista decides that he will only marry off Bianca if Katherina gets a husband first. So begins a crazy journey of deception and false identities: Lucentio, Tranio, and Hortensio compete for Bianca’s hand in marriage, while Petruchio of Verona is the only suitor brave enough to deal with Katherina’s sass.

It has been a highly successful fall campaign for MIT’s varsity athletics program as the Engineers won six of the seven fall New England Women’s and Men’s Athletic Conference (NEWMAC) championships over the past two weeks, a record level of success for MIT Athletics. Below are highlights of MIT’s fall season varsity athletics teams.

The MIT Men’s Basketball team, the no. 1 ranked team in the nation in DIII, will take on Harvard tonight at 7 p.m. at Harvard’s Lavieties Pavilion. The Engineers, coming off a historic Final Four season, will look to prepare for the 2012-2013 campaign with this highly anticipated preseason tune up. Only a few tickets remain for the nearly sold out 2,000+ seat Pavilion. 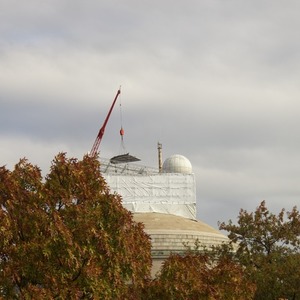 A crane lifted a piece of the skylight onto the Great Dome on Monday. The skylight is expected to be installed by January.
John A. Hawkinson—The Tech 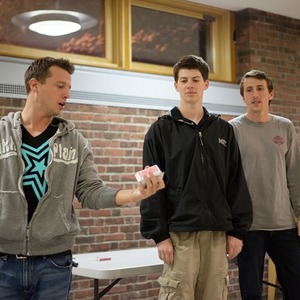 Mario Testino’s 2007 photograph of Gisele Bündchen in New York is one of many striking images on view at the MFA.
Mario Testino 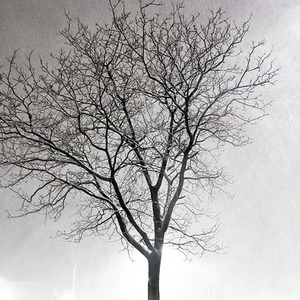 By Elijah Mena Staff Photographer On Wednesday night, the snow in the air was softly illuminated by the track lights. The snow provided a stark contrast to the dark, leafless tree adjacent to Steinbrenner Track. Thi... 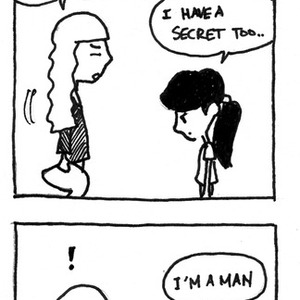 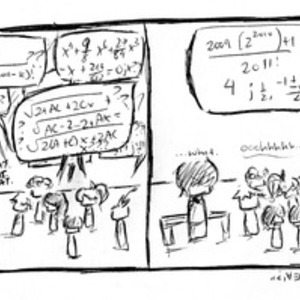 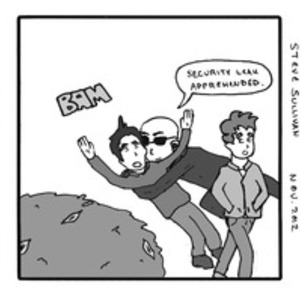 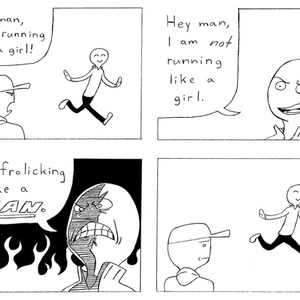 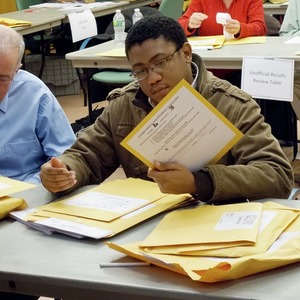 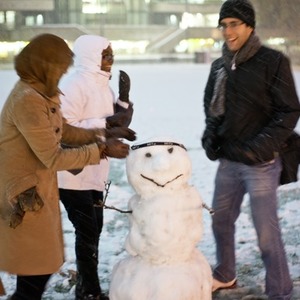 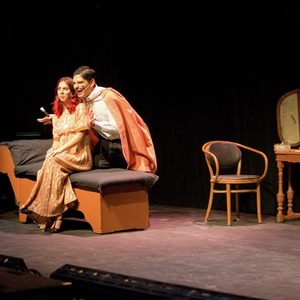 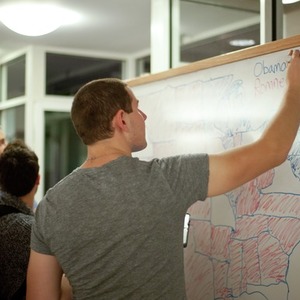 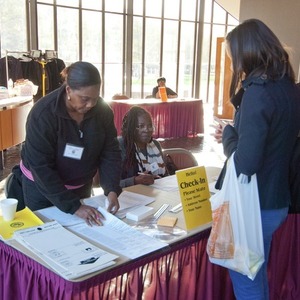 A Cambridge resident checks in at Kresge Auditorium to vote on Tuesday. In addition to the presidential and Massachusetts senate races, the ballot also contained questions regarding physician-assisted suicide and the ...
Ho Yin Au
All Photos From Issue