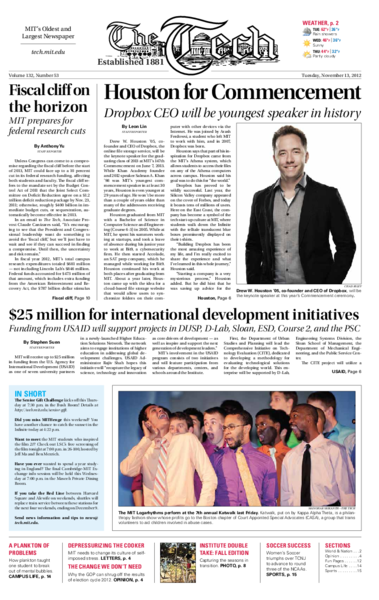 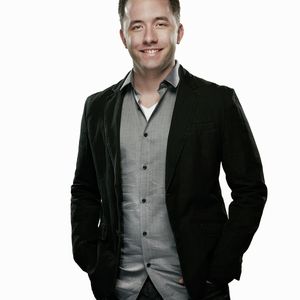 Drew W. Houston ’05, co-founder and CEO of Dropbox, the online file storage service, will be the keynote speaker for the graduating class of 2013 at MIT’s 147th Commencement on June 7, 2013. While Khan Academy founder and 2012 speaker Salman A. Khan ’98 was MIT’s youngest commencement speaker in at least 30 years, Houston is even younger at 29 years of age. He won’t be more than a couple of years older than many of the addressees receiving graduate degrees.

MIT will receive up to $25 million in funding from the U.S. Agency for International Development (USAID) as one of seven university partners in a newly-launched Higher Education Solutions Network. The network aims to engage institutions of higher education in addressing global development challenges. USAID Administrator Rajiv Shah hopes this initiative will “recapture the legacy of science, technology and innovation as core drivers of development — as well as inspire and support the next generation of development leaders.”

Fiscal cliff on the horizon

Unless Congress can come to a compromise regarding the fiscal cliff before the start of 2013, MIT could face up to a 10 percent cut in its federal research funding, affecting both students and faculty. The fiscal cliff refers to the mandate set by the Budget Control Act of 2011 that the Joint Select Committee on Deficit Reduction agree on a $1.2 trillion deficit reduction package by Nov. 23, 2011; otherwise, roughly $400 billion in immediate budget cuts, or sequestration, automatically become effective in 2013.

The Senior Gift Challenge kicks off this Thursday at 7:30 p.m. in the Bush Room! Details at http://web.mit.edu/senior-gift.

US may surpass Saudi Arabia as world’s top oil producer

In a turnaround that would have seemed far-fetched a few years ago, the United States is projected to surpass Saudi Arabia as the world’s top oil producer by 2020 while cutting its own energy use faster than any other nation, the International Energy Agency reports.

After a lovely weekend more reminiscent of September than late fall, temperatures in Cambridge will cool down after a cold front passes through this morning. For the rest of the week, high pressure will dominate, bringing mostly clear skies and temperatures in the 35-45°F range.

Afghanistan deployment is under review

HICKAM AIR FORCE BASE, Hawaii — White House and Pentagon officials hope to determine within weeks the number of U.S. troops that will remain for the long term in Afghanistan after the bulk of U.S. forces come home in 2014, Defense Secretary Leon E. Panetta said Monday.

Regulators failed Monday to win a clear victory over the father-and-son team whose mutual fund failed in one of the signal events of the 2008 financial crisis. It was the latest setback in efforts by regulators to hold individuals responsible for the risk-taking that nearly brought down the U.S. economy.

Labor leaders have Obama’s back and are ready to push

Having helped President Barack Obama win re-election, labor leaders will meet with him Tuesday and intend to offer their robust support for what they view as his mandate: Stand tough against cuts in Medicare, Medicaid

WASHINGTON — With both parties positioning for difficult negotiations to avert a fiscal crisis as Congress returns for its lame-duck session, Democrats are latching on to an idea floated by Mitt Romney to raise taxes on the rich through a hard cap on income tax deductions.

WASHINGTON — Are a string of angry emails really enough, in an age of boisterous online exchanges, to persuade the FBI to open a cyberstalking investigation?

NDJAMENA, Chad — More than 10 Kenyan police officers, and possibly as many as 31, have been killed by cattle rustlers in an ambush in a remote part of northern Kenya known as death valley, Kenyan officials said Monday, in of one the more brazen cases in recent years in the war against livestock thieves.

Last Friday’s Tech incorrectly misspelled the name of the meteorologist who wrote the weather. He is Roman Kowch, not Rowan Koch.

I’m usually skeptical of claims made by party faithfuls who, in the aftermath of losing an election, claim that no ideological adjustments are necessary to win the next election. When Kerry was defeated by Bush, I rolled my eyes as the surviving liberal rump of the Democratic Party blamed their loss on a lack of partisan purity. Similarly, I rolled my eyes when 2009 Republicans said the path forward was a return to conservative principles. To me, in both instances, the remedy for electoral losses was a simple application of median voter politics: moving toward the middle yields more victories than retreating to extremes. A bitter medicine for those who belong to those extremes, perhaps, but Hippocrates would recommend no other.

On Friday, MIT’s Men’s Basketball team played at cross-town academic rival Harvard’s court in a close 69-54 game. Fortunately, this loss will not taint the Engineers’ Division III record, as Division III season has not yet started.

Women’s Soccer heads to third round of NCAAs

MIT Women’s Soccer, ranked seventh in New England, topped the College of New Jersey 1-0 in double overtime in a high-paced NCAA Championship second round match on Sunday afternoon at Haverford College. Senior Emily Kuo scored the game-winning goal in the first minute of the second overtime period, heading the ball in after a cross from freshman Priyanka Gaur. The Engineers advanced to the third round of the tournament that will take place next weekend.

In the viscous, tiny world of plankton, there is endless, beautiful variation. 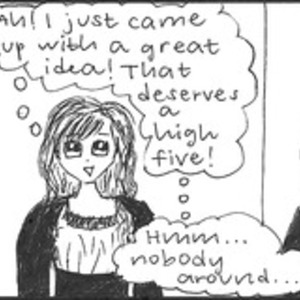 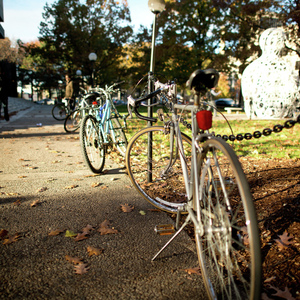 By Jessica L. Wass Photo Editor Bicycles chained up outside the student center combined with a shallow depth of field provided for an interesting sight last Sunday. The fall colors in the background lend a colorful ... 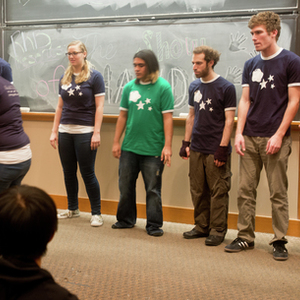 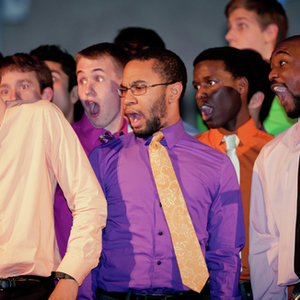 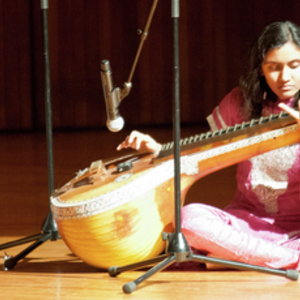 Members of MIT Swara perform at the Diwali Night celebrations held in Kresge on Sunday. The instrument pictured is the Veena, a plucked string instrument that is an essential component of India’s classical Carnatic mu...
Jaswanth Madhavan—The Tech

Drew W. Houston ’05, co-founder and CEO of Dropbox, will be the keynote speaker at this year’s Commencement ceremony.
Chad Riley 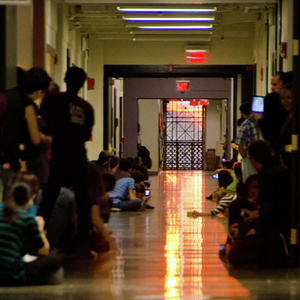