Twenty years ago, MIT’s campus looked vastly different. Maseeh Hall was a graduate dorm called Ashdown House, planning for Simmons Hall had yet to begin, Kendall Square was a quiet area recently abandoned by manufacturing companies, and the Edgerton Center had just opened.

REPORTER’S NOTEBOOK: An inside tour of the MassDOT

MIT students frequently use the T and other MassDOT transit systems; since 2010, our IDs even come with a built-in Charlie Card chip. But most students are unfamiliar with the inner workings of the transit system. I was excited to take advantage of one of the opportunities offered this IAP and take a tour of several MassDOT (Massachusetts Department of Transportation) facilities, including an underground ventilation tunnel system, bus operator training school, and the organizational headquarters for the T.

For many students, IAP brings coding challenges, externships, intense UROP-ing, and loafing around Boston. For puzzle-lovers and code-crackers, however, IAP means the return of the annual MIT Mystery Hunt, an epic weekend of puzzle-solving that draws hundreds of participants from around the world and begins this Friday at noon.

Every election day is a historic day for the American people. But for MIT students, did it seem like “just another school day?”

On Tuesday, the Dalai Lama spoke about Buddhism in the modern world. In his talk titled “Stages of Meditation: Buddhism for the 21st Century,” His Holiness explained the basic principles of Buddhism and called for respect for all beliefs.

Last spring, news of the discovery of proof of the Higgs Boson particle swept MIT’s campus, prompting discussion in classrooms, on social networks and email lists, and in casual conversations among students. During this news blitz, the recurring question on my mind was, what exactly is the Higgs Boson? Since I have no theoretical physics knowledge, I didn’t understand the significance of it at all.

Peer2Peer hopes to start next semester

Two years ago, MIT’s long-running Nightline phone service shut down, leaving the campus without an organized peer-to-peer support system. However, an anonymous email-based program, Peer2Peer, is tentatively expected to start operating next semester. 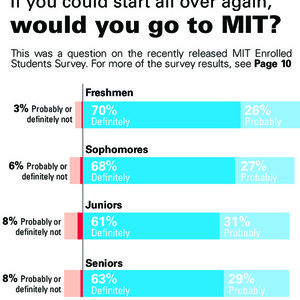 Are students more stressed these days?

The 2011 Enrolled Student Survey, which was conducted this past spring, polled undergraduates about extracurricular and academic activities, and underscored an apparent increase in student stress. About 65 percent of the undergraduate body responded to the online questionnaire, which is delivered every four years. 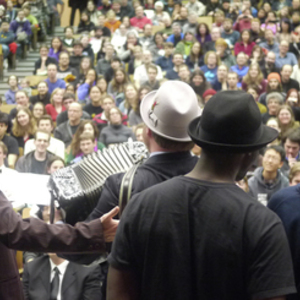 On Friday the 13th, hundreds of students, alumni, and puzzle enthusiasts gathered anxiously in Lobby 7. At noon, the members of the 33 teams that came to compete in the 2012 Mystery Hunt were greeted by two familiar characters: the infamous Max and Leo from 1968 Mel Brooks film The Producers. The two introduced the premise of the hunt, which is an MIT annual puzzling event that dates back to 1980. 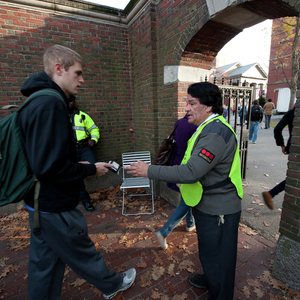 Harvard walks out of Econ 10

On Nov. 2, 70 Harvard students walked out of class in the middle of their introductory Economics 10 lecture to show solidarity with the Occupy Boston movement and protest the conservative bias they felt was present in their course.

Ambitious goals at State of the Institute

In her Monday morning State of the Institute address, President Susan J. Hockfield spoke about MIT’s preparation for the future in four main areas: attracting and retaining high-quality students, faculty, and staff; digital learning technology; encouraging the growth of this region’s “innovation cluster”; and making strides in the area of advanced manufacturing. 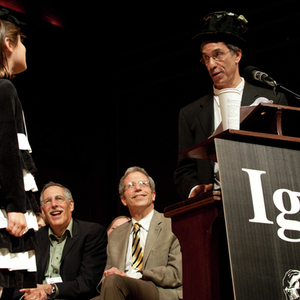 ‘Sigh-cology’ and wasabi at Ig Nobels

It’s not everyday you get to see a Nobel laureate and a Harvard professor sing “The Elements” while one of them plays the accordion. Yet that’s exactly what happened last night when Richard J. Roberts, winner of the 1993 Nobel Prize in Medicine, and Harvard medical professor Thomas Michel performed during the opening ceremonies of the Ig Nobel Prize Ceremony. Held annually in the Sanders Theatre at Harvard University, the Ig Nobels celebrate unconventional achievements in all fields of science and include performances from professors, Nobel Laureates, and professional opera singers. Chemistry was the theme of this year’s ceremony, and in that spirit each winner received a model table inscribed with the elemental symbols on the surface — a literal table of the elements.

Hungry in EC? Head to Pinkie’s

It’s 1 a.m. You’ve just finished a p-set and you’re starving. What do you do? Most students hit up LaVerde’s or Chicago Pizza, but now East Campus residents have another choice for cheap, late-night snacking thanks to Vincent P. Le ’13, also known as Pinkie. Le and a small group of volunteers have recently started Pinkie’s Diner, open Sunday through Thursday from 10 p.m. to 2 a.m. in the Talbot lounge in EC.

The biannual whirlwind of Undergraduate Association elections has passed, leaving a Senate-elect consisting of dedicated students, a Pokémon, a risqué historical figure, a feline, and several seats still to be determined by run-off elections.