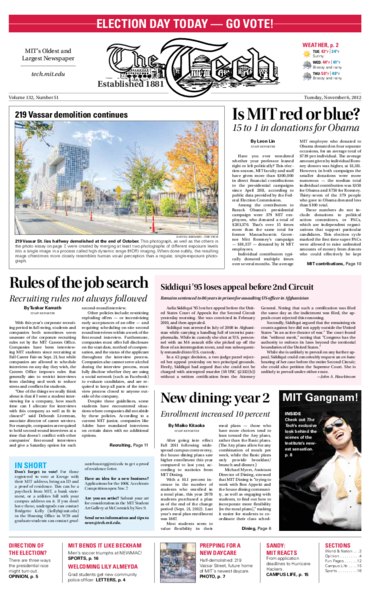 Rules of the job search

With this year’s corporate recruiting period in full swing, students and companies both sometimes seem unaware of the corporate recruiting rules set by the MIT Careers Office. Companies have been interviewing MIT students since recruiting at Fall Career Fair on Sept. 21, but while companies are allowed to schedule interviews on any day they wish, the Careers Office imposes rules that generally aim to restrict interviews from clashing and work to reduce stress and conflicts for students.

Don’t forget to vote! For those registered to vote at Kresge with their MIT address, bring an ID and a proof of residence. This can be a paycheck from MIT, a bank statement, or a utilities bill with your campus address on it. If you don’t have these, undergrads can contact Bridgette Kelly (kellyb@mit.edu) in the Housing Office in W59 and graduate students can contact graduatehousing@mit.edu to get a proof of residence letter. 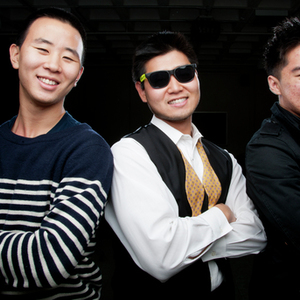 After a couple tantalizing teasers, MIT students woke up on the morning of Oct. 27 to the full-fledged “MIT Gangnam Style” video taking the Internet by storm. Since then, the MIT parody of Korean popstar Psy’s sensational “Gangnam Style” — which has skyrocketed to worldwide popularity — has garnered over 4 million views.

A number of film references are included in the video. Did you catch them all?

Aafia Siddiqui ’95 lost her appeal before the United States Court of Appeals for the Second Circuit yesterday morning. She was convicted in February 2010, and then appealed. 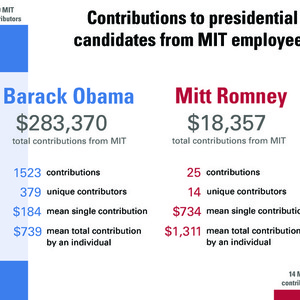 Is MIT red or blue?

Have you ever wondered whether your professor leaned right or left politically? This election season, MIT faculty and staff have given more than $300,000 in direct financial contributions to the presidential campaigns since April 2011, according to public data provided by the Federal Election Commission.

CAIRO — Five bombs exploded in the capital of Bahrain on Monday, killing two foreign workers and critically injuring a third, in a sharp intensification of the violence that has simmered in the island nation since the beginning of a pro-democracy uprising 21 months ago.

Dozens are killed in fierce outburst of Syrian violence

BEIRUT — Some of the worst violence in months racked Syria on Monday with residents of southern Damascus fleeing heavy shelling, several smaller towns shattered by air attacks, and at least two car bombs.

NAIROBI, Kenya — Wendy Sherman, the under secretary of state for political affairs, visited Somalia on Sunday, becoming the highest-ranking U.S. official to set foot in the country in more than 20 years, the State Department announced Monday.

Egyptian vigilantes crack down on abuse of women

CAIRO — The young activists lingered on the streets around Tahrir Square, scrutinizing the crowds of holiday revelers. Suddenly, they charged, pushing people aside and chasing down a young man. As the captive thrashed to get away, the activists pounded his shoulders, flipped him around and spray-painted a message on his back: “I’m a harasser.”

BERLIN — Leaders from Chancellor Angela Merkel’s coalition agreed Monday on a raft of changes to social welfare programs aimed at easing costs for average Germans to bolster the government’s sagging popularity less than a year before parliamentary elections.

HONG KONG — The Chinese government announced Monday that it had filed a case with the World Trade Organization accusing some European Union member countries of violating free trade rules with policies that favor the purchase of solar energy equipment produced in Europe.

Over a week later, the Northeast is still recovering from the impacts of Hurricane Sandy. With many people not regaining electricity until the last few days (and many still without), the recent cold temperatures have been especially unpleasant. Today will be another chilly day, with temperatures in Cambridge only reaching the mid 40°F’s.

Who will win tonight’s election?

A wise man once said, “It’s difficult to make predictions, especially about the future.” But judging by the enormous volume of guesses made in the national print, merely making a prediction seems to take no effort at all. Bewilderingly, this election cycle has predictions that run the gamut from an imminent Romney victory, to a completely tied race, to a foregone conclusion for Obama, all made with straight faces by normally reasonable people.

At the New England Women’s and Men’s Athletic Conference (NEWMAC) Semifinals, MIT Men’s Soccer defeated No. 1 seeded Babson to proceed to the championship match. MIT clinched the win against Babson after a penalty kick by junior Andrew C. Fijan in double overtime. Just 16 minutes into the game, sophomore John L. Kramer and Sean D. Bingham ’16 scored the first two goals three minutes apart. Babson tied up the game by the 29th minute, so the first half ended with a score of 2-2. While the Engineers outshot Babson 12-7 in the first half, both teams took far fewer shots in the second half with Babson outshooting MIT 5-4. Like the first half, goalie Jake L. Amereno ’16 made one save while Babson’s goalie made two, forcing the game into overtime. Even during overtime, both goalies made tremendous saves, so neither team was able to make a goal. With the game resting on penalty kicks after neither team had scored during overtime, Fijan sent the ball flying to the lower left corner, allowing MIT to advance to the finals after a 5-4 victory.

Behind the strength of efficient hitting and solid defense, the MIT women’s volleyball team defeated host and top seed Wellesley College, 25-17, 26-24, 25-15, in the 2012 New England Women’s and Men’s Athletic Conference (NEWMAC) Championship on Sunday afternoon. The No. 3 Engineers (30-5) collected their first title since 1990 and fourth overall to earn a spot in the upcoming NCAA Championship Tournament. Kristine A. Bunker ’14 was named the tournament’s Most Outstanding Player after compiling 28 kills, a .313 hitting percentage, and 15 blocks.

Studying the motion in the ocean

The ship’s engine roared to life at 2:30 a.m. and jolted me out of semi-consciousness. My head throbbed — in my dreams I hadn’t stopped cycling through the next day’s research plan, albeit in a strange, nightmarish way. I opened the curtain of my berth and took in my surroundings: the sounds of snoring shipmates — at least someone was getting extra sleep — the sight of my field notebook perched on top of the laptop with which I had spent my weekend synchronizing instruments, and the smell of coffee, coffee, coffee. Nightmare forgotten, reality filled me with eager anticipation.

The aftermath of Hurricane Sandy

Despite the 96 U.S. deaths during Sandy’s destructive course along the East Coast and the 69 killed as it swept across the Caribbean, Hurricane Sandy did very little to affect Boston in comparison to New York and Atlantic City. Since the storm avoided us and swung inland through New York and north into Canada, it is easy to forget the implications it had on our community. Nevertheless, MIT was both affected by the hurricane and is helping the recovery from the aftermath. 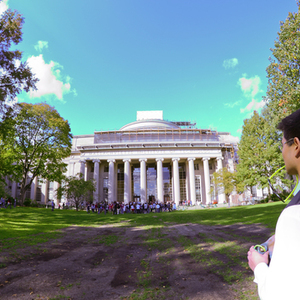 Richard Yoon stands in Killian Court before the flashmob on Oct. 21.
Eddie Ha 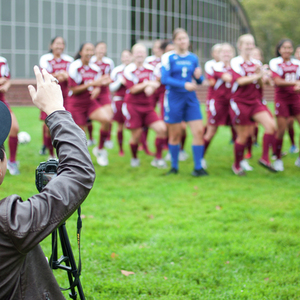 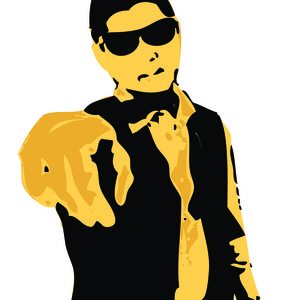 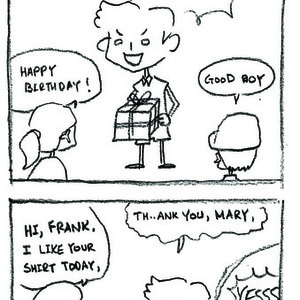 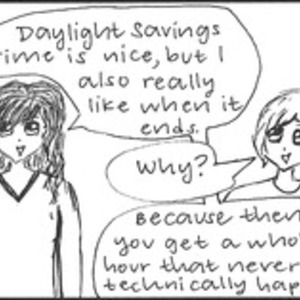 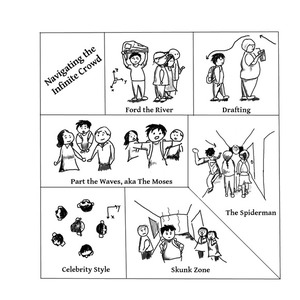 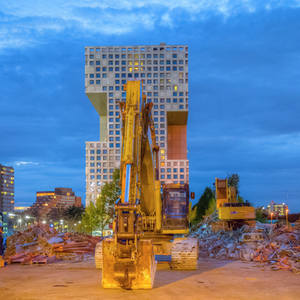 Day 9, Oct. 24. By the eighth day, most of the building had been demolished.
David J. Bermejo—The Tech 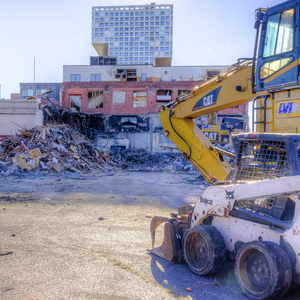 Day 1, Oct. 16. Photographs of 219 Vassar St. were taken over a week and a half period to showcase the gradual changes that took place during its demolition.
David J. Bermejo—The Tech 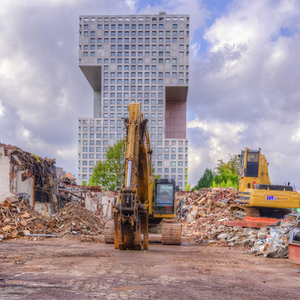 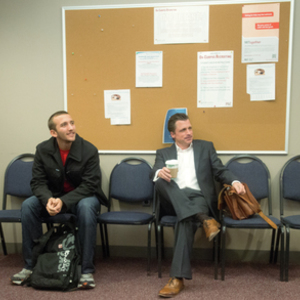 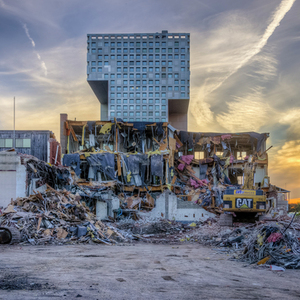 Day 2, Oct. 17. This photo highlights the range of an HDR image. By combining three different exposures into a single image, all levels of detail, from the brightness of the setting sun and to the shadows inside the d...
David J. Bermejo—The Tech 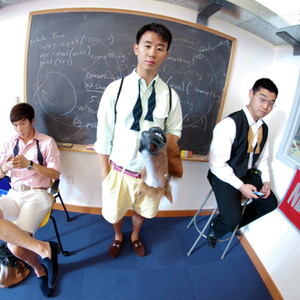 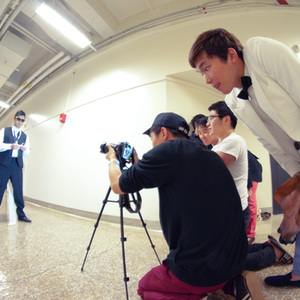 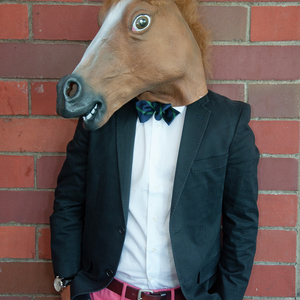 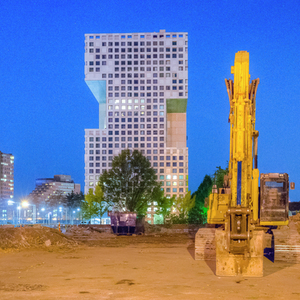 Day 11, Oct. 26. Previously a place of much noise and destruction, the demolition site was cleared and quiet on the evening of the last day.
David J. Bermejo—The Tech 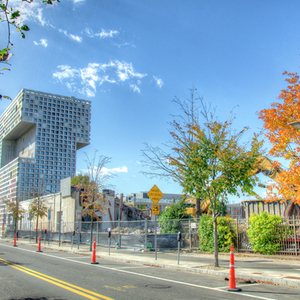 219 Vassar St. lies halfway demolished at the end of October. This photograph, as well as the others in the photo essay on page 7, were created by merging at least two photographs of different exposure levels into a s...
David J. Bermejo—The Tech
All Photos From Issue