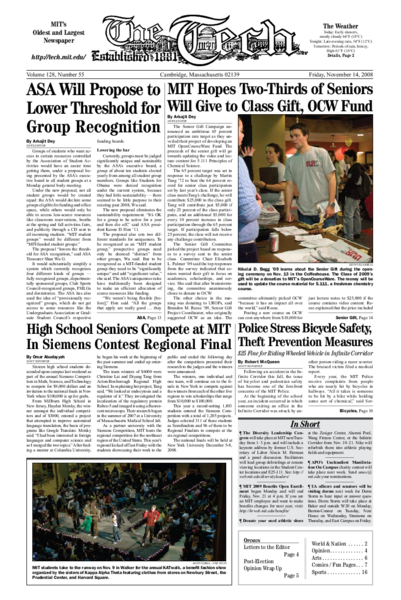 For years, as the stock market roared, educational endowments swelled, helping private secondary schools and colleges provide more financial aid, expand, and attract better faculty. But with the financial markets in crisis, those days are over. 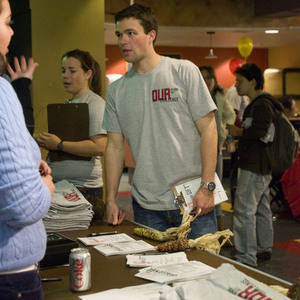 MIT Hopes Two-Thirds of Seniors Will Give to Class Gift, OCW Fund

The Senior Gift Campaign announced an ambitious 65 percent participation rate target as they unveiled their project of developing an MIT OpenCourseWare Fund. The proceeds of the senior gift will go towards updating the video and lecture content for 5.111 Principles of Chemical Science.

Following an accident in the Infinite Corridor this fall, the issue of bicyclist and pedestrian safety has become one of the forefront concerns of the MIT Police.

ASA Will Propose to Lower Threshold for Group Recognition

Groups of students who want access to certain resources controlled by the Association of Student Activities would have an easier time getting them, under a proposal being presented by the ASA’s executive board to all student groups at a Monday general body meeting.

People whose bodies make an unusually active form of a certain protein tend to have dangerously high levels of cholesterol. Those with an inactive form of the protein have low cholesterol and a low risk of heart attacks.

The Diversity Leadership Congress will take place at MIT next Tuesday from 1–3 p.m. and will include a keynote address by former U.S. Secretary of Labor Alexis M. Herman and a panel discussion. Facilitators will lead group debriefings at remote viewing locations in the Student Center locations and E25-111. See: http://web.mit.edu/diversityleaders/

Sixteen high school students descended upon campus last weekend as part of the annual Siemens Competition in Math, Science, and Technology to compete for $9,000 dollars and an invitation to the national finals in New York where $100,000 is up for grabs.

The Russians want him to hold off installation of a missile defense shield in Poland. The Europeans want him to renounce the idea of “regime change” for Iran, while the Israelis want to be sure he does not give Iran a pass when it comes to nuclear weapons.

Wang Denggui, father of three, arrived more than a year ago in the palm-lined streets of this southern town with a single goal: toil in a factory to save for his children’s school tuition.

Candy, snacks, bakery products, pet food and other Chinese products that contain milk will be detained at the border until tests prove that they are not contaminated, the federal government announced Thursday.

A noxious cocktail of soot, smog and toxic chemicals is blotting out the sun, fouling the lungs of millions of people and altering weather patterns in large parts of Asia, according to a report released Thursday by the United Nations.

The prospects of a government rescue for the nation’s foundering automakers dwindled Thursday as Democratic congressional leaders conceded that they would face potentially insurmountable Republican opposition during a lame-duck legislative session next week.

They are usually no bigger than a man’s fist and attached to a magnet or a strip of gummy adhesive — thus the name “obwah lasica” in Arabic, or “sticky bomb.”

One doesn’t have to be in New England very long to realize that the weather gets crazier as we approach the winter solstice. While the polar regions cool off quickly, the tropics remain relatively constant producing a large equator to pole temperature difference and a strong jet stream. The consequence of this is increased storminess that throws the area in to a weather roller coaster yielding huge swings in temperature and a whole gamut of precipitation. It’s Mother Nature’s way of trying to restore equilibrium, but at the cost of a wet pair of pants and shoes from time to time.

On Tuesday, November 4th, history occurred. The United States of America elected its first ever African American President, Barack H. Obama. The election, driven by a record turnout, is an event of landmark symbolism and will herald the beginning of a series of changes in American politics that will have a significant impact on the United States and the world at large.

At the sight of citizens voting for state and federal officeholders, Dan Yelin laments that MIT’s officers, from President Hockfield on down, are not accountable to their constituents (<i>The Tech</i>, Volume 128, Issue 54).

A Vibrant (but Entrenched) Political System

Stella Schieffer made a strong case in the November 4th issue of <i>The</i> <i>Tech</i> (“Party-Based Elections”) for reforming the American electoral system. She described the advantages of Germany’s parliamentary electoral system, where voters separately elect both geographical delegates and party representatives proportional to their support. Schieffer argues that the German system more accurately reflects the sentiments of the electorate and that parties maintain their positions more reliably than individual politicians do.

Last Tuesday saw the conclusion of the longest, costliest, and most reported political contest in the history of United States democracy. Pundits raved over how this election broke all the rules and would be an irrevocable turning point for the course of this nation. However, despite the rhetoric of change that emanated from both candidates McCain and Obama, this campaign was strikingly conventional in many respects.

ALBUM REVIEW East from the Midwest

Chicago-based trio Pillars & Tongues don’t just play together: they talk to each other, critique each other, and advise each other—with their instruments, of course. Their frank, uninhibited musical conversations have been compiled onto a disc entitled <i>Protection</i>, released just last month on the Contraphonic imprint. 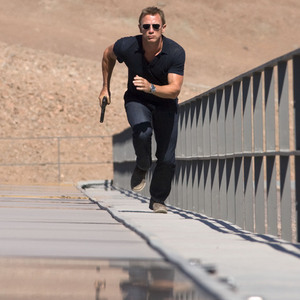 If “The Notebook” humped a car chase, the unholy spawn that was produced would be “Quantum of Solace.” Much like a Miss USA contestant named Mildred, the latest Bond film is visually impressive, has a stupid name, and is pretty much devoid of substance. While it features top-shelf action and is extremely exciting throughout, the latest incarnation of James Bond simply lacks the cool confidence that sets the franchise apart from every other secret agent thriller.

At MIT, horseback riding is a sport that has vacillated between being active and successful one year, and being completely nonexistent the next. This year, Anna S. Jaffe ’09, President and Show Captain, and her team members, have undertaken the task of restarting the team. The group has again started getting together, training and competing at horse shows with the Intercollegiate Horse Show Association (IHSA).

The Tech’s Athlete of the Week: Zachary E. Kabelac ’12 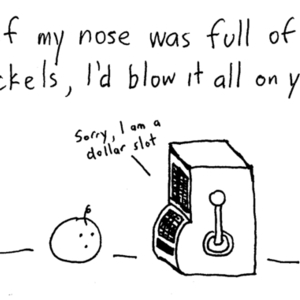 Nikolai D. Begg ’09 learns about the Senior Gift during the opening ceremony on Nov. 13 in the Coffeehouse. The Class of 2009’s gift will be a donation to MIT’s OpenCourseWare. The money will be used to update the cou...
Seth Villarreal 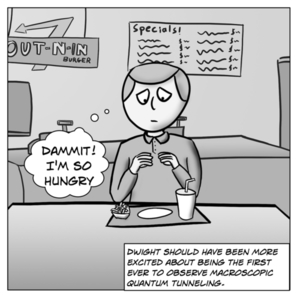 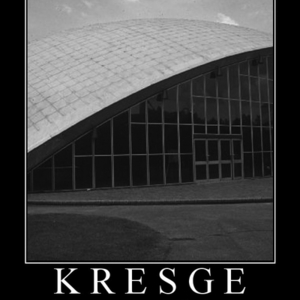 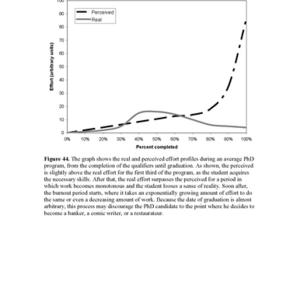 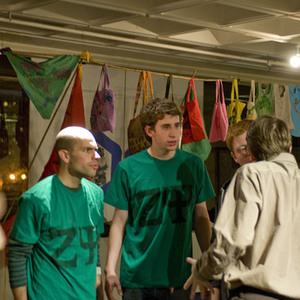 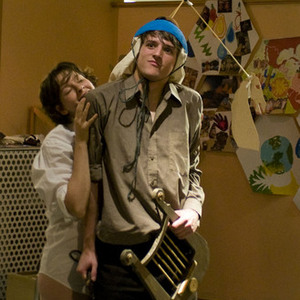 Mia A. Shandell ’10 as the Woman seduces the Phantom of Ideal (Jonas Kubilius ’08) during “Menfolks and the Woman,” a Hungarian satire by Milan Fust translated and directed by Istvan Cziegler. This theater arts worksh...
Meng Heng Touch 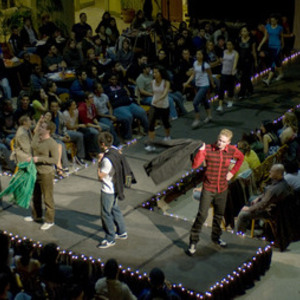 MIT students take to the runway on Nov. 9 in Walker for the annual KATwalk, a benefit fashion show organized by the sisters of Kappa Alpha Theta featuring clothes from stores on Newbury Street, the Prudential Center, ...
Aditi Verma—The Tech 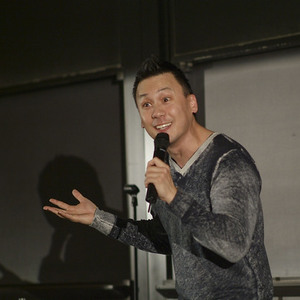 A stand up comedian Elliot Chang, one of the few who have received a standing ovation on Comedy Central’s Premium Blend, performs during his show hosted by the Korean Students Association on Nov. 8 in 54-100.
Jongu Shin—The Tech 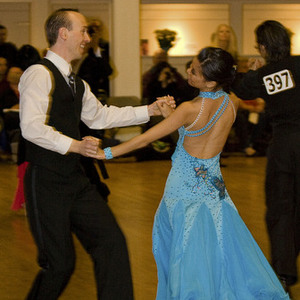 YaaLirng Tu G and Jeff McCollum dance to the gold in the American Smooth as part of the MIT Ballroom Dance Team on Nov. 9 at the Brown Ballroom Dance Competition.
Andriy Didovyk 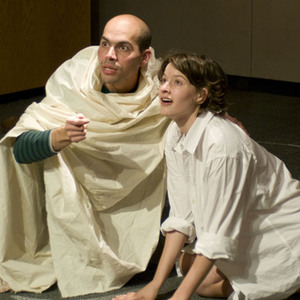 The Phantom of the Football Player, played by Ari Daniel Shapiro G, advises the woman played by Mia A. Shandell ’10 in “Menfolks and the Woman” running from Nov. 13-15 at 8 p.m. in the Wiesner Student Gallery. This th...
Meng Heng Touch
All Photos From Issue