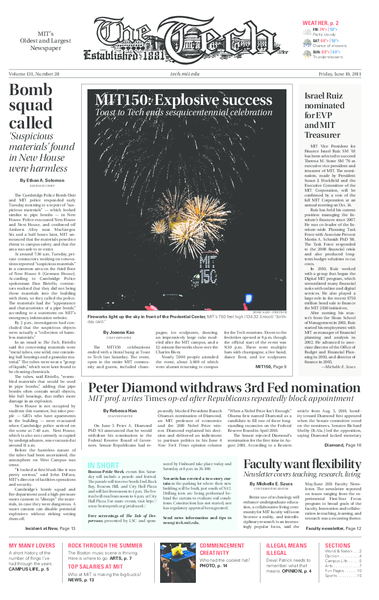 Boston Pride Week events this Saturday will include a parade and festival. The parade will traverse South End, Back Bay, Beacon Hill, and City Hall Plaza and will last from noon to 4 p.m. The festival will run from noon to 6 p.m. at City Hall Plaza. For more events, visit http://www.bostonpride.org/prideweek/.

Stanford lost its patent dispute with Roche on Tuesday.

Better use of technology will enhance undergraduate education, a collaborative living community for MIT faculty will soon become a reality, and interdisciplinary research is an increasingly popular focus, said the May/June 2011 Faculty Newsletter. The newsletter reported on issues ranging from the experimental First-Year Focus program to broad goals of the faculty. Innovation and collaboration in teaching, learning, and research was a recurring theme.

On June 5 Peter A. Diamond PhD ’63 announced that he would withdraw his nomination to the Federal Reserve Board of Governors. Senate Republicans had repeatedly blocked President Barack Obama’s nomination of Diamond, an MIT professor of economics and the 2010 Nobel Prize winner. Diamond explained his decision and delivered an indictment to partisan politics in his June 6 New York Times opinion column “When a Nobel Prize Isn’t Enough.” Obama first named Diamond as a candidate to fill one of three long-standing vacancies on the Federal Reserve Board in April 2010.

The MIT150 celebrations ended with a literal bang at Toast to Tech last Saturday. The event, open to the entire MIT community and guests, included champagne, ice sculptures, dancing, an impressively large cake modeled after the MIT campus, and a 12-minute fireworks show over the Charles River. 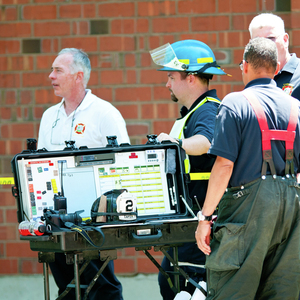 The Cambridge Police Bomb Unit and MIT police responded early Tuesday morning to a report of “suspicious materials” — which looked similar to pipe bombs — in New House. Police evacuated New House and Next House, and cordoned off Amherst Alley near MacGregor. Six and a half hours later, MIT announced that the materials posed no threat to campus safety, and that the area was safe to re-enter.

Last Saturday night, much of the MIT Campus was without running water due to a water main break which occurred near Harvard Square between Broadway and Trowbridge Street. The break caused a reduction in water pressure all across Cambridge, enough to leave most MIT buildings without water.

MIT Vice President for Finance Israel Ruiz SM ’01 has been selected to succeed Theresa M. Stone SM ’76 as executive vice president and treasurer of MIT. The nomination, made by President Susan J. Hockfield and the Executive Committee of the MIT Corporation, will be confirmed by a vote of the full MIT Corporation at an annual meeting on Oct. 14.

Citigroup’s revelation that hackers stole personal information from more than 200,000 credit card holders makes it one of the largest direct attacks on a major bank.

WASHINGTON — Leon E. Panetta, President Barack Obama’s nominee to be secretary of defense, deflected persistent questions Thursday about one of the most pressing issues at the Pentagon, the scope of the American troop withdrawals from Afghanistan next month.

KARBEYAZ, Turkey — Security forces loyal to President Bashar Assad of Syria converged in the country’s restive northwest Thursday as hundreds of residents fled across the border into Turkey, heightening fears of a budding refugee crisis and a widening crackdown on dissent.

ABU DHABI, United Arab Emirates — The nations intervening in Libya pledged as much as $1 billion in support for the opposition there on Thursday as senior officials continued to predict that the collapse of Moammar Gadhafi’s government could be imminent.

PINETOP, Ariz. — The gusty winds that have been fueling a vast wildfire in eastern Arizona slowed somewhat Thursday, allowing firefighters to make some headway against the blaze, which has turned much of the lush green pine forest here to black soot and sent thousands of residents fleeing for their lives.

WASHINGTON — Newt Gingrich’s presidential campaign imploded Thursday as his top advisers banded together and resigned, setting off a further exodus of aides and supporters and battering his hopes of a political comeback.

WASHINGTON — Michael E. Leiter, head of the nation’s main counterterrorism center, is resigning after nearly four years in a job that has increasingly focused on detecting and thwarting smaller and more diverse terrorist plots.

The National Weather Service has confirmed the intensities of the three tornados that struck western Massachusetts last Wednesday, June 1. The strongest left a path of devastation 39 miles long, from Westfield to Charlton, and was half a mile wide at some points. That tornado was classified as an EF-3, the third-highest rating on the scale with estimated maximum winds of 160 mph — a rarity for this part of the country. Two shorter-lived EF-1 tornadoes were confirmed in Wilbraham and North Brimfield.

Massachusetts Governor Deval Patrick has a long history of pandering to illegal immigrants. During his first term, Patrick reversed a decision by the previous Massachusetts governor, Mitt Romney, which gave state troopers the power to arrest illegal immigrants. Let me point out that Romney’s policy makes sense because, as the title may imply, illegal immigrants are here illegally. They are breaking the law. As such, they should be arrested. Shocking, I know. Deval Patrick’s rationale for promptly reversing Gov. Romney’s decision was that state troopers “have a very big job as it is, without having to add enforcing federal immigration laws on top of it.” Ah, well there we are. Those poor state troopers are just too busy enforcing other laws. So if they pull over someone for speeding and it turns out that the individual is also an illegal immigrant, too bad! After all, according to Patrick, they have more important things to do—like enforcing laws that don’t alienate one of Patrick’s key special interests (the immigrant community). 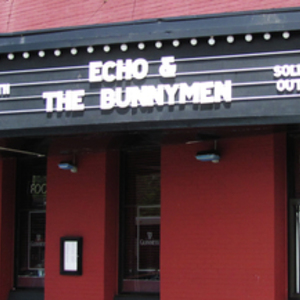 Students staying on campus this summer should be happy that MIT is next to the lively city of Boston, Mass. and not Ithaca, N.Y. Here are some moderate-size, lower-cost venues that you should visit while you are still immune to p-sets.

The MIT men’s and women’s track teams competed at the NCAA Division III National Championships in Delaware, Ohio two weekends ago. The men’s team, which captured its 11th straight conference title and finished second in New England, had three representatives: Kenneth B. Cooper ’13, Paul D. Welle ’11, and Vladimir Sobes ’11. Cooper was the first competitor for MIT in the hammer throw. Mother nature was not cooperative, however, as a lightning delay postponed the meet during Cooper’s flight. After returning to action, Cooper fouled on two of his attempts, and his third was not enough to qualify for the final. He finished in 17th place with a throw of 176-00 feet.

Wyatt L. Ubellacker ’13 was named to the third team of COSIDA’s Academic All-America program. As a swimmer, Wyatt earned a spot on the at-large team — the most competitive team that includes student athletes who compete in a variety of sports, including swimming and diving, men’s volleyball, tennis, lacrosse, field hockey, and fencing. He was named to the First Team All-District, which includes all New England states, New York, and several Canadian provinces.

NOT RELATED TO TIGER My many lovers

As the sexy beast I am — chicks dig acne — it should be no surprise to anyone that I have had a number of lovers over the years. Here, I go through my past relationships and explain why they ended:

Wearing our school’s black graduation gown with my ceremonial decorations, I became one of our school’s 475 seniors to walk across the stage at the Daughters of the American Revolution Constitution Hall in Washington, D.C., on Tuesday. With my diploma in hand, I felt a satisfying sense of finality coupled with optimism: I was ready to take on the world. Adding some amusement to the situation was the fact that I immediately had to return to the symphonic band to provide the ceremony’s live music — I played at my own graduation.

An empty hallway inside MIT Medical provides a study in texture and shape. The walls, ceiling, and floor are all different materials. One wall is brick, and the other consists of windows, though the texture from this perspective is dominated by the windows’ wooden borders. The floor is smooth tile, while the ceiling appears to be concrete. The image is thus split into four nearly triangle-shaped regions. The borders between these regions seem to converge to a single vanishing point, and would do so were the hallway infinite instead of abruptly truncated by a glass double door. 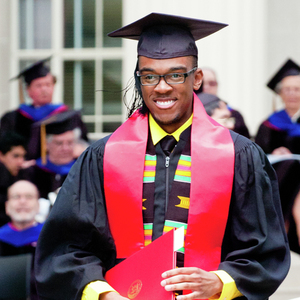 MIT and Cambridge police and firefighters coordinated the response to potential pipe bombs in New House early Tuesday morning. There was never any threat to campus safety, but the Cambridge bomb squad carried out a se...
Ethan A. Solomon—The Tech 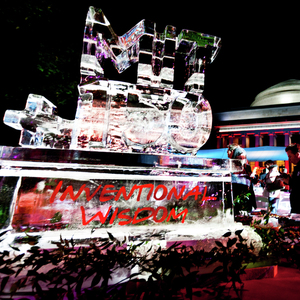 Ice sculptures of objects with significance to MIT’s history and the Toast to Tech event adorned tables around Killian.
Manohar Srikanth—The Tech 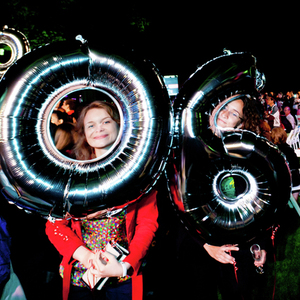 Balloons representing the class years of alumni present for their class reunions were scattered throughout Killian.
Manohar Srikanth—The Tech 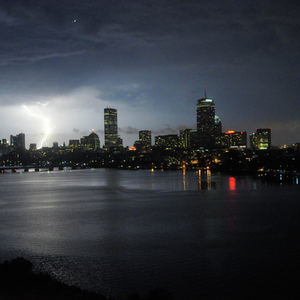 Lightning appeared in the sky over Boston during the tornado and thunderstorm last week.
Grgur Tokic 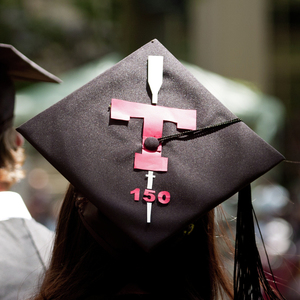 The class of 2011 was MIT’s 145th graduating class, which coincides with MIT’s 150th year. The discrepancy was caused because the Civil War delayed the start of classes.
Greg Steinbrecher—The Tech 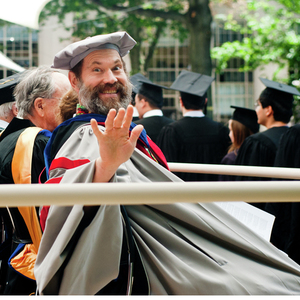 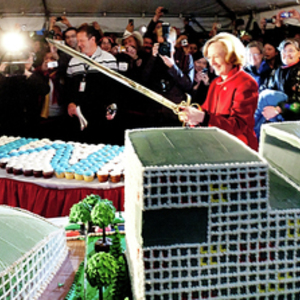 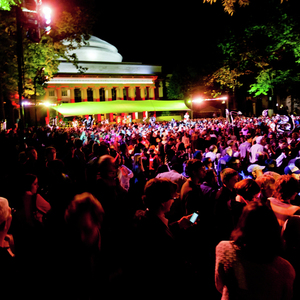 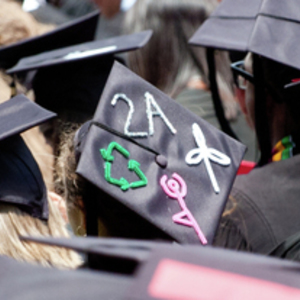 Some students displayed symbols representing their major on their mortarboards.
Greg Steinbrecher—The Tech 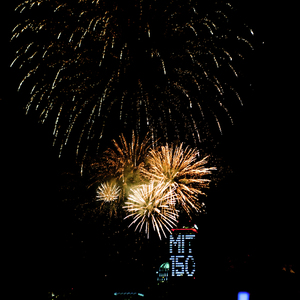 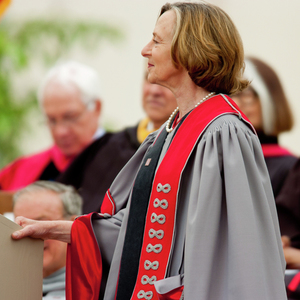 President Susan J. Hockfield prepares to give her charge to the graduates.
Greg Steinbrecher—The Tech 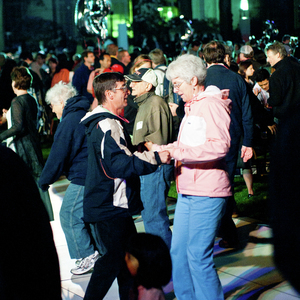 Alumni and friends dance to music by Boston City Rhythm during the Toast to Tech event on Saturday.
Jessica Liu—The Tech 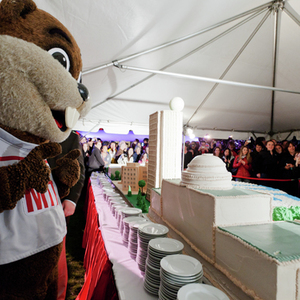 Tim the Beaver made an appearance to admire the cake.
Manohar Srikanth—The Tech

The Paradise Rock Club is at 967 Commonwealth Avenue, Boston.
Courtesy of John Phelan 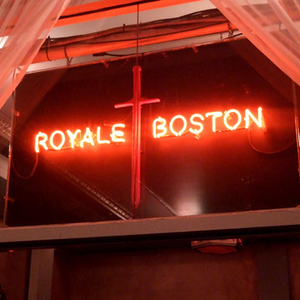 Courtesy of Bradsearles The Royale Boston is located at 279 Tremont Street, Boston. 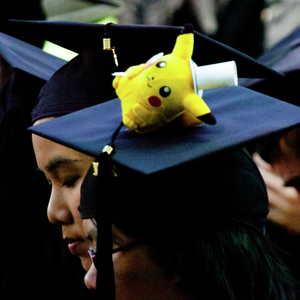 A stuffed Pikachu is visible on one graduate’s mortarboard. Other creative designs included a graduated cylinder and flags of different nations.
Greg Steinbrecher—The Tech 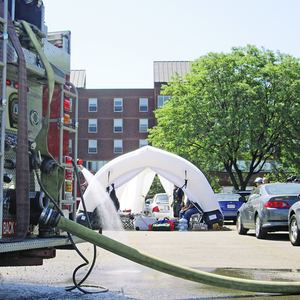 A hazardous materials decontamination tent was set up in the Westgate parking lot early Tuesday morning in response to a New House bomb scare. Cambridge and MIT police eventually determined that there was never any th...
Ethan A. Solomon—The Tech
All Photos From Issue