An empty hallway inside MIT Medical provides a study in texture and shape. The walls, ceiling, and floor are all different materials. One wall is brick, and the other consists of windows, though the texture from this perspective is dominated by the windows’ wooden borders. The floor is smooth tile, while the ceiling appears to be concrete. The image is thus split into four nearly triangle-shaped regions. The borders between these regions seem to converge to a single vanishing point, and would do so were the hallway infinite instead of abruptly truncated by a glass double door. 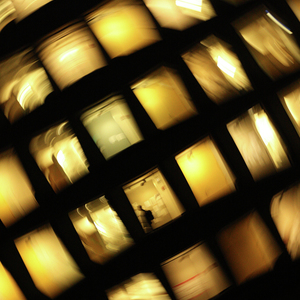 An abstract perspective of MIT’s Chemistry building, Building 18, viewed from the west. At night, the windows light up in a grid pattern; the yellow glow strongly contrasts the black outer walls. 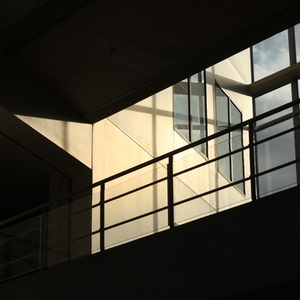 The limited dynamic range of a camera can often pose difficulties for the photographer, but in certain situations, it can also create artistic possibilities.