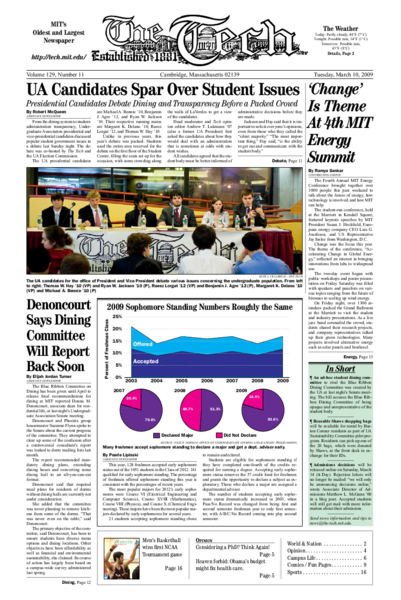 The Blue Ribbon Committee on Dining has been given until April to release final recommendations for dining at MIT reported Donna M. Denoncourt, associate dean for residential life, at last night’s Undergraduate Association Senate meeting.

The Fourth Annual MIT Energy Conference brought together over 1000 people this past weekend to talk about the future of energy, how technology is involved, and how MIT can help. 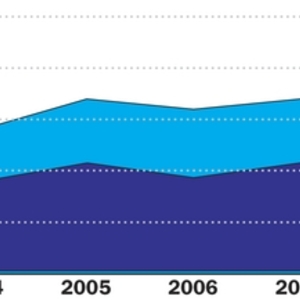 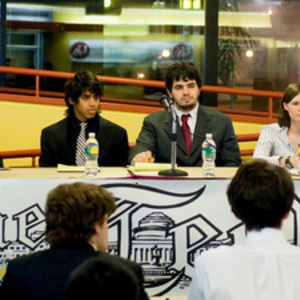 From the dining system to student-administration transparency, Undergraduate Association presidential and vice-presidential candidates discussed popular student government issues in a debate last Sunday night. The debate was co-hosted by <i>The Tech</i> and the UA Election Commission.

A mutiny within the military has intensified the political crisis in Madagascar, an impoverished island nation off the southeastern coast of Africa that has suffered turmoil most of this year.

What could be worse than graduating from an American business school this year with an interest in banking?

Calling into question the legitimacy of all the signing statements that former President George W. Bush used to challenge new laws, President Barack Obama on Monday ordered executive officials to consult Attorney General Eric H. Holder Jr. before relying on any of them to bypass a statute.

The Factory’s Closed, But the Workers Keep Showing Up

What do you do when your employer announces that your company has shut down and that you no longer have a job, effective immediately?

The commander of a secretive branch of America’s Special Operations forces in February ordered a halt to most commando missions in Afghanistan, reflecting a growing concern that civilian deaths caused by U.S. firepower are jeopardizing broader goals there.

The United States has lodged a formal protest with the government in Beijing, saying five Chinese ships harassed a U.S. surveillance vessel in international waters, in actions the Pentagon described as illegal, unprofessional and dangerous.

Obama Puts His Own Spin on The Mix of Science, Politics

It appears as if this year’s cold and snowy season is not yet over! In the wee hours of Monday (around 3 a.m. when I was up pondering today’s forecast), I noticed sleet. When I woke up a few hours later, I witnessed another attack from the snow gods. And what was there yesterday afternoon? More snow. This weekend’s glorious 60 degree temperatures are gone. We move from spring to winter in 24 hours, such is the will of the weather of Cambridge, Mass. But never fear, spring is nearly here! The temperatures this week aren’t returning anywhere near the January abyss, with highs in the mid 40s, and lows no lower than the low 30s. And after tonight, all the potential precipitation this week is more likely to be of the liquid variety.

I can tell when someone is about to quit their PhD program.

Three Myths About the President’s Budget

The President’s budget has elicited a vicious backlash from conservative pundits, one that I think is worth addressing head-on. Here are three key myths about the budget that have gained traction among Republicans in recent days.

A caption on page 1 on Friday’s issue incorrectly stated that the label on Tim the Beaver’s shirt read “MIT” in Hebrew. It actually read “TIM.”

By chance I stumbled onto an article that was written by a Dr. Jonathan Farley that appears in your February 13, 2009 publication, <i>The Tech</i>.

Engineers Come Back to Beat Rhode Island College in OT, 73-68

MIT freshman William E. “Billy” Bender’s legacy as a clutch performer continues to grow. The rookie knocked down four free throws in the final minute to send Friday’s NCAA Tournament First Round game to overtime before coming up with a steal, a key offensive rebound, and two more free throws in the extra session as MIT stunned nationally-ranked No. 17 Rhode Island College, 73-68, in RIC’s Murray Center.

Farmingdale State advanced to the NCAA Division III Men’s Basketball Tournament Sectional Round for the first time in the program’s history on Saturday, defeating MIT, 67-61, at The Murray Center on the campus of Rhode Island College. Senior guard Damien Santana scored 20 of his team-high 23 points in the first half to lead the Rams’ attack.

It seems to me that most of our generation agrees that child and pre-teen television programming these days just isn’t as good as it used to be. If that strikes you as a random topic to be writing about, it probably is, but ask around and I suspect you’ll find awareness of it to be more widespread than one might suspect. The quality has simply gone down.

On Thursday afternoon, I ran into my freshman year roommate. She was the second person I met at MIT, right after I arrived in my room and my temporary roommate and I went down to the lobby to mingle. We have been good friends ever since. Ours is one of those friendships that is based on mutual respect and trust, and not on common values and opinions (she is a conservative Republican and I am a liberal Democrat). I mention her because she is one of those people I like to have around when I want to vent. We will be 1,038 miles apart next year.

<b>Scene I: Alexandra and I are having dinner at a swanky bar. I am returning from outside.</b> 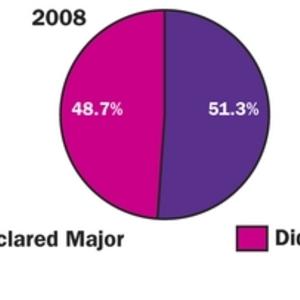 Many freshmen accept sophomore standing to declare a major and get a dept. advisor early.
SOURCE: Julie B. Norman, Office of Undergraduate Advising and Academic Programming 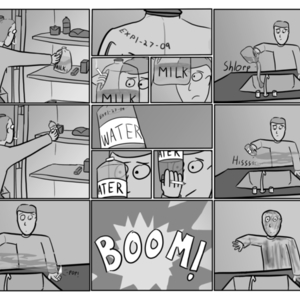 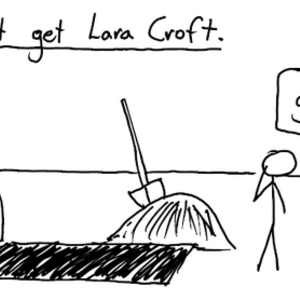 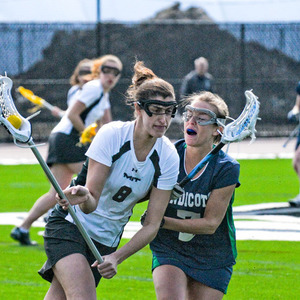 Senior Bradley H. Gampel carries the basketball down the court under pressure in the game against Rhode Island College on Friday, Mar. 6.
William Yee—The Tech 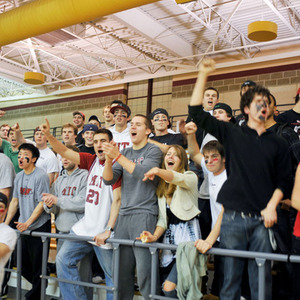 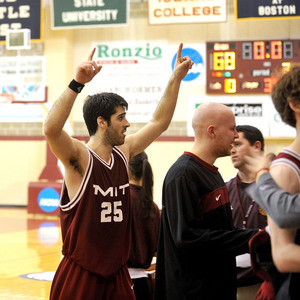 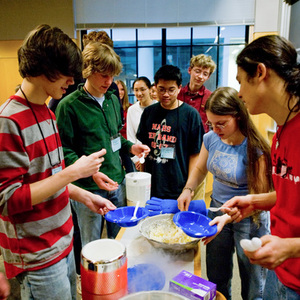 Students gather for liquid nitrogen ice cream after learning about the thermodynamic properties of liquid nitrogen and its effects on roses, tennis balls, and bananas. The class, entitled Applied Cryomania and taught ...
Chelsea Grimm—The Tech 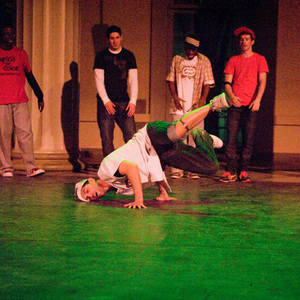