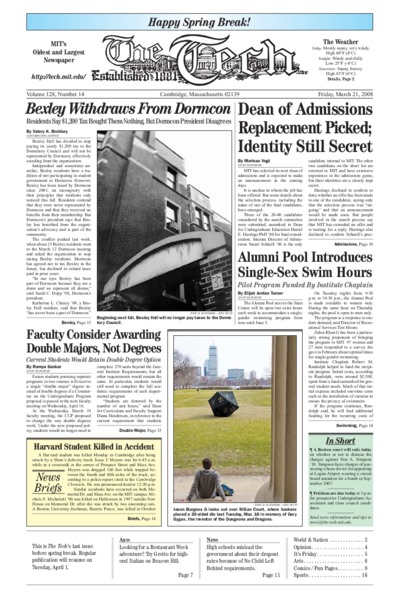 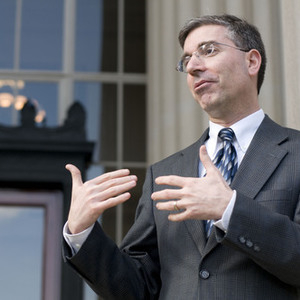 The next dean of admissions will be Stuart Schmill '86. Schmill has served as the interim director of admissions since Marilee Jones's abrupt resignation last April.

Future students pursuing separate programs in two courses will receive a single “double major” degree instead of double degrees if a Committee on the Undergraduate Program proposal is passed at the next faculty meeting on Wednesday, April 16.

MIT has selected its next dean of admissions and is expected to make an announcement in the coming days.

The Alumni Pool next to the Stata Center will be open two extra hours each week to accommodate a single-gender swimming program from now until June 5.

A Harvard student was killed Monday in Cambridge after being struck by a Shaw’s delivery truck. Isaac J. Meyers was hit 6:45 a.m. while in a crosswalk at the corner of Prospect Street and Mass Ave. Meyers was dragged 160 feet while trapped between the fourth and fifth axles of the truck, according to a police report cited in the <i>Cambridge Chronicle</i>. He was pronounced dead at 12:20 p.m. 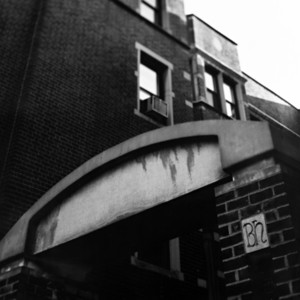 Bexley Hall has decided to stop paying its yearly $1,200 tax to the Dormitory Council and will not be represented by Dormcon, effectively seceding from the organization.

Ever since Sen. Hillary Rodham Clinton, D-N.Y., started running for president, her team has argued that she is more electable than Sen. Barack Obama, D-Ill.: more experience, as first lady and senator; more spine, after years fighting Republicans; and more popular with key voter blocs, like women, Hispanics and the elderly.

Chinese Crackdown in Tibet Echoes in Taiwan Before Vote

Violent unrest in Tibet has created shock waves in another volatile region on China’s periphery, shaking up the presidential election in Taiwan and sapping support for the candidate Beijing hoped would win handily.

There will be no new primary in Michigan.

Kofi Annan, the former secretary general, said Thursday that the United Nations was “overstretched” in conflict areas and should resist taking on new responsibilities as long as major powers proved unwilling to supply needed support.

U.S. Defends Use of Intrusive Tactics in Spitzer Investigation

The Justice Department used some of its most intrusive tactics against Eliot Spitzer, examining his financial records, eavesdropping on his phone calls and tailing him during its criminal investigation of the Emperor’s Club prostitution ring.

Even as financial shares led a stock market rally on Thursday, the crisis in the credit markets threatened to engulf one of the nation’s largest commercial finance companies.

Oil, gold and other major commodities fell sharply on Thursday, capping their steepest weekly drop in a half-century, as investors fled what many had believed to be the last safe haven in turbulent markets.

Earlier this week, a slow-moving storm system dumped extremely heavy rain over a wide arc from northeast Texas to southern Indiana. Accumulated rainfall totals of over 6 inches (15 cm) in a 36 hour span were commonplace in this area, with scattered reports of up to 12 inches (30 cm) of rain. Some rivers with localized drainage basins in southern Missouri and northern Arkansas have experienced the highest water levels since record keeping began. Even portions of main-stem rivers like the Ohio and Mississippi are expected to see major flood conditions this weekend, as the rainwater continues to flow downhill toward the Gulf of Mexico.

The pro-independence protests that Tibetans around the world kicked off this past week should be allowed to continue in a peaceful manner. Timed to coincide with the 49th anniversary of the Dalai Lama’s escape from Lhasa, Tibet to Dharmasala, India, these protests stand for an impressively sustained defiance against the Chinese political machine. It is most disappointing that neighboring India has decided to detain protesters for no apparent reason. It demonstrates India’s willingness to bow to China’s political wishes for the sake of maintaining relations. While this may be the correct diplomatic move, no individual who cares for the well-being of other human beings should be able to genuinely accept it. It is a heinous crime. The monks have the right to non-violent protest and let them exercise it, be it in Lhasa, New Delhi, Kathmandu, or Washington, D.C. If human rights are sacrificed so easily now, what will happen in the future when the economic clout of certain countries grows? As the Olympics approach, let us all remember we are human beings and not let others be treated so trivially in the name of superficial purpose.

I decided to kick off my 2008 Boston Restaurant Week experience with lunch at Grotto with a couple friends. Grotto, one of Beacon Hill’s high-end Italian restaurants, looks unassuming enough from the outside; the restaurant is below street level and, like its name implies, is quite cave-like once you get past the heavy purple curtain at the entrance. Inside, the red brick walls are peppered with paintings done by local artists, and chandeliers and a fancy wall mirror juxtaposed against the red-piped ceiling (complete with greasy rag) give the place a funky, almost hip vibe. A glance around the small dining area made it clear that we were the youngest patrons there; perhaps Grotto entertains a younger crowd for dinner. The service, while not extraordinary, was decent, and the atmosphere relaxed, although a bit noisier than what I expected.

Few films (that I’ve seen, at least) achieve what Gus Van Sant’s latest work, “Paranoid Park,” accomplishes with such elegance and ease. If the disjointed, hand-wound montage of San Francisco traffic in the opening scene isn’t enough to foreshadow the lack of order and peace in our hero’s young teenage life, then certainly it’s the haunting soundtrack. Or, you also have the eerie shift in lighting when Alex (Gabe Nevins), America’s John Doe of troubled teens, escapes to the seashore to write an epic letter. Then you consider the fact that the majority of the scenes shift in and out of focus, sometimes barely giving the viewer any clue as to where the scene is actually taking place. This is where the success of<i> “</i>Paranoid Park” triumphs beyond other films about the difficulty being a teenager: it is as though all the elements (artistic and practical) conspire together to make the viewer <i>feel</i> like Alex. We truly <i>see</i> and <i>live</i> as Alex is seeing and living. 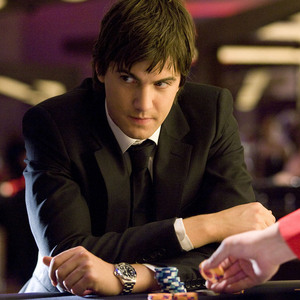 INTERVIEW How to Lose a Movie Set in Vegas

A few weeks ago, I sat down with the charming Jim Sturgess, the up and coming 26 year old British actor best know for his role as Jude in the Beatles musical, “Across the Universe.” In the upcoming film “21,” (based on the book <i>Bringing Down the House</i> by Ben Mezrich) Mr. Sturgess plays Ben Campbell, an MIT student who uses his math acumen to win millions playing blackjack in Vegas. During our conversation, Mr. Sturgess talked about what it was like playing a character who is based on a real life MIT alum, Jeffrey Ma ’94, filming in Las Vegas, and working with Kevin Spacey. Below is an excerpt:

The women’s water polo team took sole control of first place in the North Atlantic Division on March 13 with a 10-8 win over Boston College at the Zesiger Center Pool. Blair K. Brettmann G and Analiese M. DiConti ’10 had three goals each to give the Engineers an early lead. The team held off Boston College’s late attempts in the final minutes of the game.

The Engineers put the finishing touches on their third consecutive top 20 finish at the NCAA Women’s Swimming and Diving Championships on Saturday, while senior Doria M. Holbrook ’08 closed her career as the top diver in Institute history. Holbrook won her eighth All-America honor in as many tries.

The Tech’s Athlete of the Week: Sophia L. Harrison ’08

Sophia L. Harrison ’08 was named the Eastern Collegiate Athletic Conference Co-Gymnast of the Year on Saturday as MIT placed fifth at the ECAC Championships. In addition, Harrison captured the all-around crown in the competition with a personal best of 38.275. She placed first in uneven bars with a 9.625, and took third on floor with a 9.675

Senior night ended in triumph for the men’s volleyball team, as the Engineers defeated Harvard University for the first time since 1999 in front of an energized Rockwell Cage on Wednesday night. After dropping the first game, MIT came back to defeat its rivals from down the river, 22-30, 30-26, 30-28, and 30-27.

The women’s gymnastics team posted its highest team score in four years and the third-best total in the program’s history with a total of 185.025 points to place fifth at the Eastern College Athletic Conference championships hosted by Springfield College on Saturday. Ursinus College was the crowned the champion with an overall mark of 187.675, followed by State University of New York at Brockport (187.175), State University of New York at Cortland (186.75), and the host Pride (185.875).

When most people think of fashion, they don’t picture this column or the average trip to the mall. Instead, they think of the glamorous world of couture, replete with catwalks and coat hanger-thin models, wearing outrageously impractical creations and strutting among crowds of high-brow socialites. Though this world exists, it has not been the focus of this column, as it is a world none of us will likely ever inhabit. What goes on there, however, does have a direct impact on the clothes we wear. So we decided to take a peek into that world to see why people care at all about designers, fashion shows, and the trends they bring. 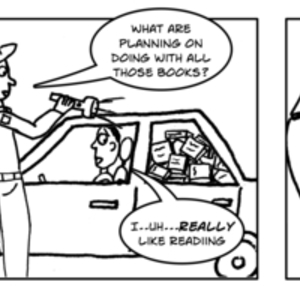 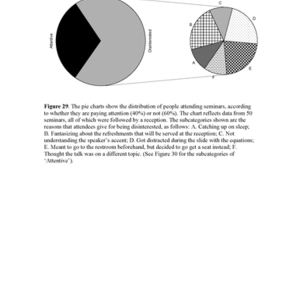 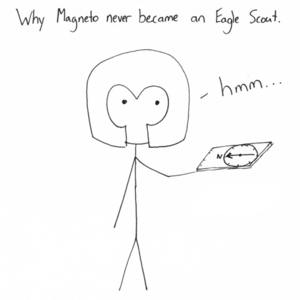 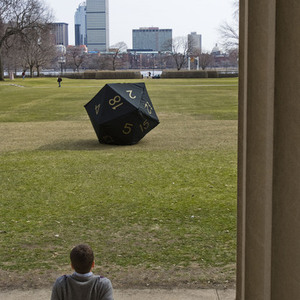 Jason Burgess G looks out over Killian Court, where hackers placed a 20-sided die last Tuesday, Mar. 18 in memory of Gary Gygax, the inventor of the Dungeons and Dragons.
Eric D. Schmiedl—The Tech 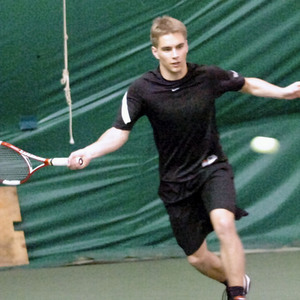 Ken Van Tilburg ’11 hits a running forehand during a doubles match against Emerson College in the J.B. Carr Tennis Bubble on March 19. Van Tilburg and partner Eric A. Beren ’08, this week’s NEWMAC Doubles Team of the ...
David Da He—The Tech 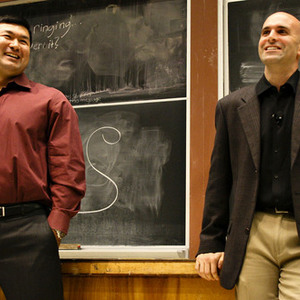 Stuart Schmill ’86 will be MIT’s next dean of admissions. Schmill is currently interim director of admissions, a position he has held since the departure of Marilee Jones in April 2007.
Ricardo Ramirez—The Tech 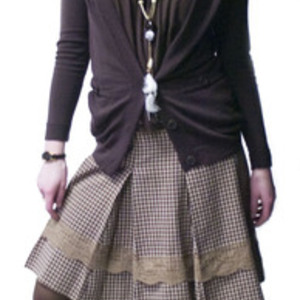