The MIT field hockey team ended it’s exciting run at the New England Women’s and Men’s Athletic Conference (NEWMAC) championship this Sunday with a 1-0 loss against Babson College. MIT defeated Springfield College last Tuesday with a score of 4-2 to advance to a semifinal game against Smith College on Saturday.

After falling to Williams College in the NCAA Regional Finals in the 2015-2016 season, MIT rebounded this season by revisiting the NEWMAC Championship games to face Wellesley and win the championship.

Women’s soccer advanced to the semifinals of the NEWMAC tournament with a 1-0 win over Wellesley. Allie Werner ’20 scored the solitary goal for the Engineers.

Here, we hear from Guo herself, from her immediate reactions on winning the award to reflections on what it took to sustain an elite level of performance for four years. UROP supervisors, swimming coach, and teammates chime in on what made Margaret Guo simply marvellous.

Field hockey (11-3, 6-1 in conference) has played lights out for the most past this season as it sits a solitary game back of conference-leading Babson College.

World Series 2016: why each team could win

After six months of regular and postseason play, the 2016 World Series will see two teams competing, neither of which have experienced a championship in a very long time. The Chicago Cubs will try to break their 108-year curse, and the Cleveland Indians will try to break a curse of their own by becoming the latest city to win two sports championships in the same year (alongside LeBron James’ Cavaliers).

The Engineers have started the 2016-17 season with an 8-0 record after sweeps of Emerson, Springfield, Mt. Holyoke, Clark, and Wheaton, and cozy defeats of Wellesley, Babson, and Smith.

Women’s soccer (12-4) came from behind to defeat Wellesley 2-1. Allie Werner ’20 scored the matchwinner, her first goal as an Engineer, with fewerthan seven minutes to play in regulation after Montana Reilly ’20 had equalized just after halftime.

Working hard on and off the field, the MIT women’s soccer team is engineering a season to remember.

Synchronization and trust are essential in competitive sailing

It may be common knowledge that sailing involves racing with yachts, but it is probably less apparent as to how exactly how competitions are conducted, how they’re scored, and what kinds of preparation go into training for events and regattas.

Women's soccer (10-3) won a tight contest away at Wheaton College. Jacqueline Simmons '18 scored from a penalty kick as the Engineers extended their winning streak to six while completing their fifth straight shutout.

Sports player of the month

Ullmann spoke about the incredible support system that the women’s soccer team has always provided, how the team tries to play its best on the field when the firehose is at its fiercest off the field, and her evolution as a leader, teammate, and friend both on and off the pitch.

Not only was Lara Rakocevic the Engineer’s top performer in singles, she was also the only player from the New England Women’s and Men’s Athletic Conference (NEWMAC) to reach the final eight.

The MIT men’s and women’s cross country (XC) teams got off to good starts last weekend in the Purple Valley Classic at Williams College. Competing against many of the top teams in the country, the women finished in second place overall while the men finished in third. 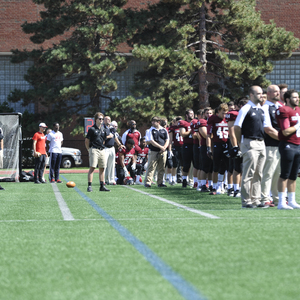 Five turnovers by MIT proved too big an obstacle to overcome as MIT suffered a 31-10 defeat to begin the season 0-3.