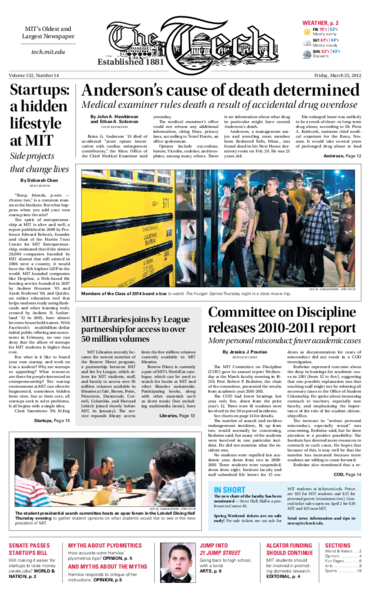 Startups: a hidden lifestyle at MIT

“Sleep, friends, p-sets — choose two,” is a common mantra at the Institute. But what happens when you add your own startup into the mix?

Anderson’s cause of death determined

The new chair of the faculty has been nominated — Steve Hall. Hall is a professor in Course 16.

MIT Libraries recently became the newest member of the Borrow Direct program, a partnership between MIT and the Ivy League, which allows for MIT students, staff, and faculty to access over 50 million volumes available in libraries at Yale, Brown, Penn, Princeton, Dartmouth, Cornell, Columbia, and Harvard (which joined shortly before MIT, in January). The service expands library access from the five million volumes currently available in MIT libraries.

Four months before a best-selling Alzheimer’s drug was set to lose its patent protection, its makers received approval for a higher dosage that extended their exclusive right to sell the drug. But the higher dosage caused potentially dangerous side effects and worked only slightly better than the existing drugs, according to an article published Thursday in the British Medical Journal. 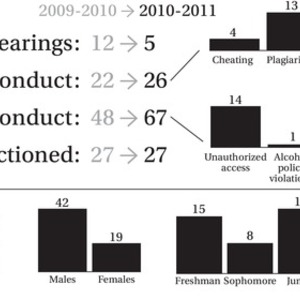 The MIT Committee on Discipline (COD) gave its annual report Wednesday at the March faculty meeting in 10-250. Prof. Robert P. Redwine, the chair of the committee, presented the results from academic year 2010-2011.

US relaxes some restrictions for counterterrorism analysis

WASHINGTON — The Obama administration is moving to relax restrictions on how counterterrorism analysts may retrieve, store and search information about Americans gathered by government agencies for purposes other than national security threats.

Record-breaking warmth ending over the weekend

New England has experienced warm, tranquil weather over the past week. High temperatures have been able to climb into the 70s°F (21-25°C) for most days this week, breaking records on Sunday and Monday. Yesterday’s high of 83°F (28°C) also broke a record of 72°F (22°C) for that day. These highs are actually Boston’s typical temperatures for late June! Today, the Boston area has yet another chance of seeing highs reach near 75°F (24°C).

The Affordable Care Act doesn’t poll particularly well. On the campaign trail, saying “I’m going to end Obamacare” is an easy applause line for Republican presidential candidates. It ignites social conservatives like the Catholic bishop of Oakland, who will be protesting its contraception coverage provisions Friday in San Francisco.

The Suffolk jury charged with deciding the case against two men accused in the 2010 Mattapan killings twice told a Superior Court Judge that it was deadlocked, but then voted unanimously to continue deliberating, a highly unusual decision, according to legal specialists.

WASHINGTON — Depending on who is speaking, a bill approved by the Senate on Thursday to make it easier for small companies to raise money will either improve the economy by creating jobs or cause unwitting investors to get swindled.

WASHINGTON — In a rebuff to President Barack Obama, the Republican-controlled House passed a bill Thursday to abolish a Medicare cost control board created by the new health care law.

BEIJING — China’s Justice Ministry has issued a requirement that new lawyers and those reapplying for licenses swear an oath of loyalty to the Communist Party, another step in a campaign to rein in lawyers who continue to challenge the political and legal systems by which the party maintains power.

The Alcator C-Mod fusion reactor is one of the largest experiments at MIT. It plays a vital role in the scientific community at the Institute, and in the broader nuclear science community. But its future is in jeopardy — the White House’s 2013 federal budget proposes cutting all of the $18 million devoted to Alcator, shuttering the project. The Tech believes that C-Mod’s funding should not be cut and urges Congress to rethink the Department of Energy’s recommendation.

First off, a big thanks to Wuqiong for joining the discussion on athletic training! One of Fresh Start’s goals is to get people on campus sharing ideas about fitness and finding ways to make time for healthy endeavors. He has excellent points for athletes looking to improve vertical leap, and it’s a very nice supplement to what we posted on Tuesday. I strongly encourage others to share their experiences and tips either to The Tech opinion section, online comments, and/or by emailing freshstart@tech.mit.edu so that your ideas will show up in print!

The myths about plyometrics

Allison Hamilos posted an arti cle about plyometrics on March 20, 2012. Although she gave the right reasons for doing plyometrics, what she considered plyometrics is quite inaccurate and would not improve your goals of explosive strength. What she described can be usable in its own right as a fat-loss and general conditioning workout, but it is not true that it would help you jump higher or run faster (assuming that you are already a decent athlete). Her safety advice is sound, other than the use of “athletic shoes.” 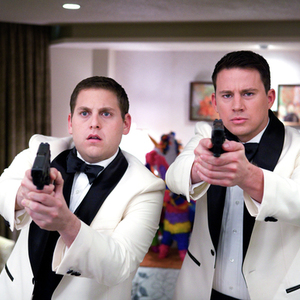 In this loose adaptation of the 1980s TV show 21 Jump Street, high school enemies turned best buds, Morton Schmidt (Jonah Hill) and Greg Jenko (Channing Tatum) are a motley pair of rookie cops who find themselves transferred to the Jump Street unit, a revived undercover police program from the ’80s. In an attempt to find a drug supplier at Sagan High, Jenko and Schmidt pose as students and find themselves awkwardly navigating the social waters of high school once again. Fortified by his glory days as ruthless bully and super-star jock, Jenko confidently approaches the high-school scene while Schmidt anxiously anticipates a repeat of his teenage misery. This time around, however, Schmidt fits in with the new-age popular crowd, while Jenko’s antiquated notion of “cool” quickly undercuts his chances of moving up Sagan High’s social ladder. 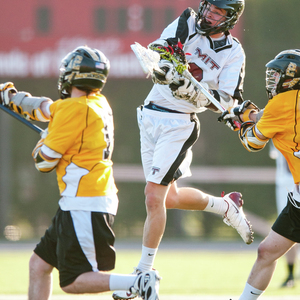 On Tuesday afternoon, MIT’s Women’s Lacrosse scored a huge victory over Framingham State, beating the Rams 20-12 and bringing MIT’s record to 1-4. MIT’s confidence brought on an early 7-2 run, which the Rams fought to bring down to 7-6 just short of the end of the first half. The first half included remarkable scoring by Laura M. Wacker ’13 who amassed three goals, and Katie M. Kauffman ’12, who had two. With the help of Molly E. McShane ’13’s two free position goals, the Engineers ended the half at 9-7. 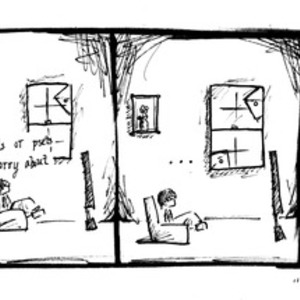 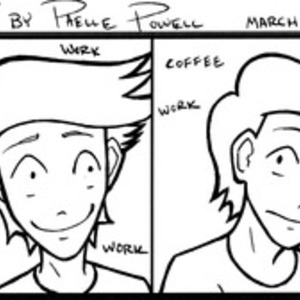 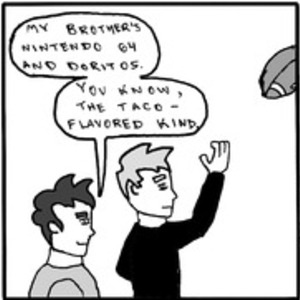 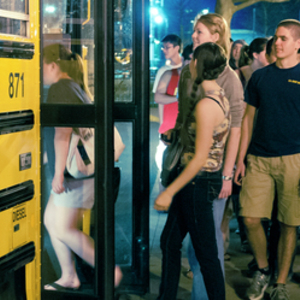 Members of the Class of 2014 board a bus to watch The Hunger Games Thursday night in a class movie trip.
Ian M. Gorodisher—The Tech

Benjamin D. Hessels ‘14 leaps over a defender in Tuesday’s lacrosse game at Steinbrenner Stadium against the Wentworth Institute of Technology. The Engineers won 9-6 over the Leopards, their second win in the three ga...
Christopher A. Maynor—The Tech 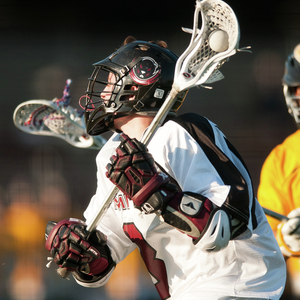 James C. Slonaker ’15 strides past a defender in the second half of the game. Slonaker scored four goals against Wentworth in Tuesday’s game.
Christopher A. Maynor—The Tech 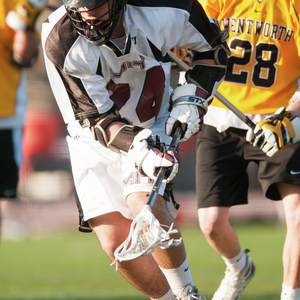 William M. Kelleher ’15 drives to the goal late in the game Thursday evening. Kelleher made an assist early in the first half.
Christopher A. Maynor—The Tech 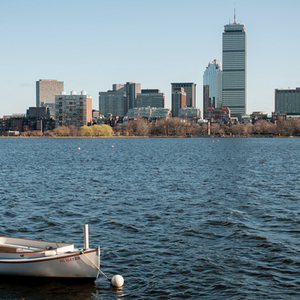 A boat rocks gently on the Charles on a warm Wednesday afternoon while sailboats run downwind beneath the John Hancock Tower.
Christopher A. Maynor—The Tech 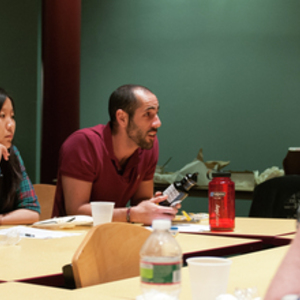 The student presidential search committee hosts an open forum in the Lobdell Dining Hall Thursday evening to gather student opinions on what students would like to see in the new president of MIT.
Ian M. Gorodisher—The Tech
All Photos From Issue