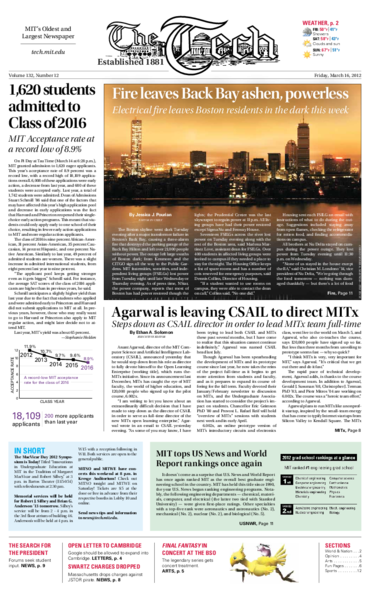 Anant Agarwal, director of the MIT Computer Science and Artificial Intelligence Laboratory (CSAIL), announced yesterday that he would step down from his role as director to fully devote himself to the Open Learning Enterprise (working title), which runs theMITx initiative. Since its announcement last December, MITx has caught the eye of MIT faculty, the world of higher education, and 120,000 people who signed up for the pilot course, 6.002x.

The Graduate Student Council/Undergraduate Association student advisory group to the Presidential Search Committee have initiated a series of public forums with the intent of getting student input on the search for MIT’s next president. The first of these forums was held on Tuesday evening in Ashdown House’s Hulsizer Room.

The MacVicar Day 2012 Symposium is Today! Titled “Innovations in Undergraduate Education at MIT in the Tradition of Margaret MacVicar and Robert Silbey,” at 3 p.m. in Bartos Theater (E15-054) with refreshments at 2:30 p.m. 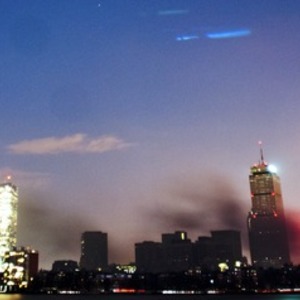 The Boston skyline went dark Tuesday evening after a major transformer failure in Boston’s Back Bay, causing a three-alarm fire that destroyed the parking garage of the Back Bay Hilton and left over 21,000 people without power. The outage left large swaths of Boston dark; from Kenmore and the CITGO sign all the way to the Public Gardens. MIT fraternities, sororities, and independent living groups (FSILGs) lost power from Tuesday night until late Wednesday or Thursday evening. As of press time, NStar, the power company, reports that most of Boston has had power restored though the lights; the Prudential Center was the last skyscraper to regain power at 11 p.m. All living groups have had their power restored except Sigma Nu and Fenway House. 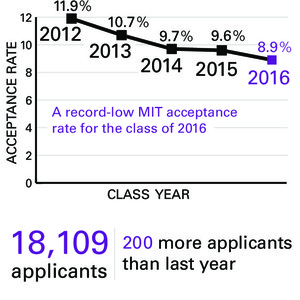 On Pi Day at Tau Time (March 14 at 6:28 p.m.), MIT granted admission to 1,620 eager applicants. This year’s acceptance rate of 8.9 percent was a record low, with a record high of 18,109 applications overall. 6,008 of these applications were early action, a decrease from last year, and 680 of these students were accepted early. Last year, a total of 1,742 students were admitted. Dean of Admissions Stuart Schmill ’86 said that one of the factors that may have affected this year’s high application pool and decrease in early applications was the fact that Harvard and Princeton reopened their single-choice early action programs. This meant that students could only apply early to one school of their choice, resulting in fewer early action applications to MIT and more regular action applicants. 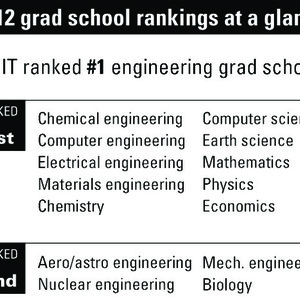 MIT tops US News and World Report rankings once again

It doesn’t come as a surprise that U.S. News and World Report has once again ranked MIT as the overall best graduate engineering school in the country. MIT has held this title since 1990, the year U.S. News began ranking engineering programs. Notably, the following engineering departments — chemical, materials, computer, and electrical (the latter two tied with Stanford University) — were given first-place ratings. Other specialties with a top-five rank were aeronautics and astronautics (No. 2), mechanical (No. 2), nuclear (No. 2), and biological (No. 5).

The Commonwealth of Massachusetts has dropped all six charges against Aaron H. Swartz, the computer activist who allegedly downloaded millions of academic journal archives from JSTOR via a laptop housed in network closet in MIT’s Building 16 running “keepgrabbing.py.”

BEIJING — A deep vein of intrigue has always pulsed through the messy process of sorting out power in China’s Communist Party.

European officials see progress, but urge Greece to do more

ATHENS — Greece has made progress in raising much needed revenue, impressively overshooting its tax collection targets, but more needs to be done to ensure that money gets to the country’s languishing economy, the head of the European Commission’s task force on Greece said Thursday.

Backlash aside, charities see lessons in a web video

It has galvanized young Americans, inspired a flood of donations and stirred a backlash from critics. But for some in the nonprofit world, the reaction to the unprecedented success of an advocacy video about the murderous African warlord Joseph Kony can be summed up in a word: envy.

LARGO, Md. — In what has become a weekly ritual, President Barack Obama on Thursday defended his administration’s energy policy, in the face of relentlessly rising gasoline prices, to an American public that believes he can do more to ease the pain at the pump.

Senators issue warning about use of the Patriot Act

WASHINGTON — For more than two years, a handful of Democrats on the Senate intelligence committee have warned that the government is secretly interpreting its surveillance powers under the Patriot Act in a way that would be alarming if the public — or even others in Congress — knew about it.

After two days of clouds and chilly temperatures, sunshine and unusually warm weather are expected to make a comeback this weekend in association with a broad high pressure system. Earlier this week, temperatures repeatedly exceeded their climatological normals by upwards of 20°F. In fact, Monday’s high temperature of 71°F at Logan Airport broke the 110-year-old record high of 69°F.

WASHINGTON — At least two federal prosecutors involved in the botched ethics trial of the late Sen. Ted Stevens “intentionally withheld and concealed” significant evidence from the defense team that could have resulted in his acquittal, a court-appointed investigator has concluded.

An open letter to Cambridge about the Google expansion

The sounds behind Final Fantasy

The Tech had the chance to speak with Grammy award-winning conductor, composer, and music director Arnold Roth about his performance of Final Fantasy soundtracks at Boston’s Symphony Hall last Saturday as part of his Distant Worlds concert series. He reveals his connection to video game and film music, talks about the relationship to his close friend Nobuo Uematsu, the original composer of the Final Fantasy soundtracks, and explains what makes video game fans a great audience for classical music in our exclusive interview!

Symphony Hall resonates with the sounds of Final Fantasy

The Boston Symphony Hall hosted a very special event last Saturday. It featured not Dvorak, nor Bach, nor Mendelssohn, but instead video game pieces from almost 25 years of Final Fantasy scores. Even though this event did not attract Symphony Hall’s regular audience, the place was sold out. Symphony Hall was overflowing with Final Fantasy fans, many of them dressed as original characters from the game. A number of fans brought their copies of Final Fantasy soundtracks or games so they could get an autograph after the show.

Behind the strength of a six-run second inning and a four-run burst in the eighth, the MIT Baseball team defeated Wentworth Institute of Technology, 13-4, on Wednesday afternoon. With the win, the Engineers improved to 4-2 on the year while the Leopards’ ledger lowered to 7-6.

On Tuesday afternoon, MIT Softball lost to Simmons College, 5-1, in their season opener. MIT took an early 1-0 lead over Simmons College before the Sharks struck for two runs in the fourth inning and tacked on three more in the fifth to down the Engineers, 5-1. The game was the season opener for Tech while Simmons improves to 4-7 with the win.

Sections of Boston were engulfed in smoke on Tuesday evening, resulting from an electrical fire. A transformer burst into flames at 40 Dalton Street, across from a parking garage at the Back Bay Hilton. About 21,000 c...
Arthur Petron—The Tech 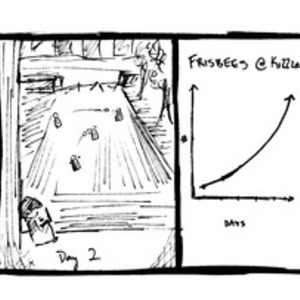 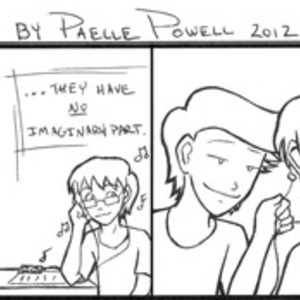 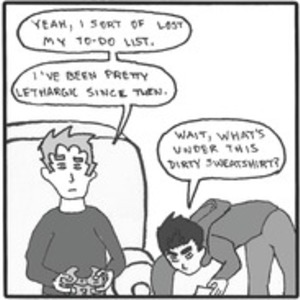 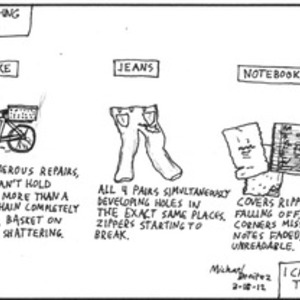 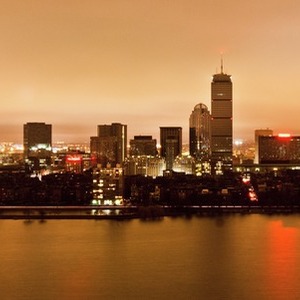 Pockets of the Back Bay were still without power Wednesday evening, resulting from a transformer fire on Tuesday. Many venues in the Prudential Center used generators for electricity, but others were shut down. About ...
Christopher A. Maynor—The Tech 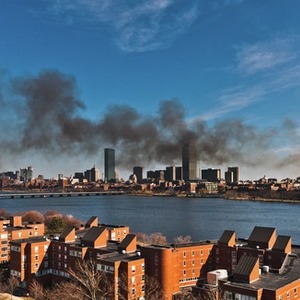 In addition to the electrical fire on Tuesday, an unrelated brush fire also erupted on Sunday afternoon. This fire was along the sides of the Muddy River near Fenway and was promptly put out by firefighters. Smoke cov...
Manohar Srikanth—The Tech
All Photos From Issue