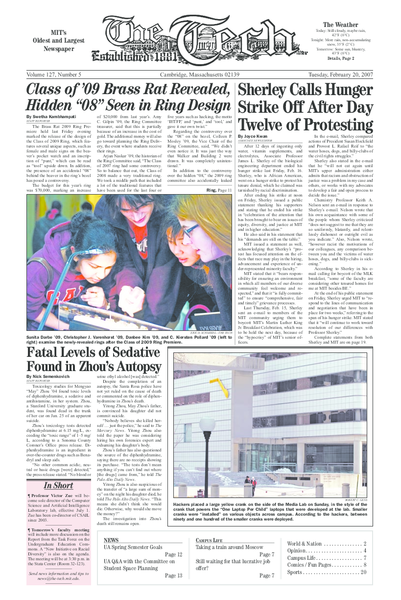 Statements from James L. Sherley and MIT Administration Regarding the End of Sherley’s Hunger Strike

<i>On Friday, Feb. 16, James L. Sherley and MIT issued the following statements regarding the conclusion of Sherley’s 12-day hunger strike that same day. Sherley was protesting racial discrimination in his tenure case. For more information, see the article on page 1.</i>

As media companies struggle to reclaim control over their movies, television shows and music in a world of online file-sharing software, they have found an ally in software of another kind.

Will the car of the future be foldable? 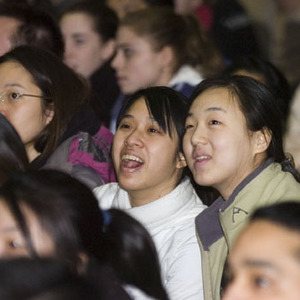 The Brass Rat 2009 Ring Premiere held last Friday evening marked the release of the design of the Class of 2009 Ring, which features several unique aspects, such as female and male signs on the beaver’s pocket watch and an inscription of “punt,” which can be read as “tool” upside down. In addition, the presence of an accidental “08” behind the beaver in the ring’s bezel has posed a controversy.

<i>This is the seventh of a series of weekly interviews with members of different Undergraduate Association committees. These interviews will be conducted by </i>The Tech<i>’s news editors and members of the editorial board. A UA representative will be present during these interviews as well. Questions for the UA committee members should be sent to </i>uaqa@the-tech.mit.edu<i> the same week they are featured. Responses to these questions will be printed alongside the following week’s interview.</i>

Sherley Calls Hunger Strike Off After Day Twelve of Protesting

After 12 days of ingesting only water, vitamin supplements, and electrolytes, Associate Professor James L. Sherley of the biological engineering department ended his hunger strike last Friday, Feb. 16. Sherley, who is African American, went on a hunger strike to protest his tenure denial, which he claimed was tarnished by racial discrimination.

Undergraduate Association Goals Checklist For Spring 2007 SemesterThis list outlines the goals and objectives set by the UA for the current semester. The tasks are divided and listed by committee.

In a coordinated assault on an American combat outpost north of Baghdad on Monday, suicide bombers drove three cars laden with explosives into the base, killing two American soldiers and wounding at least 17 more, according to witnesses and the American military.

For most Guineans, the last straw came two months ago.

India, Pakistan Vow That Train Blast Will Not Affect Relations

A day after two homemade bombs killed at least 66 people on a train traveling to Pakistan from India, the governments of both countries on Monday condemned the attack and pledged that it would not deter their aim of reducing longstanding hostilities on the subcontinent.

An American-sponsored meeting between Israeli and Palestinian leaders meant to start a new peace initiative after six years ended Monday with little more concrete than a promise to meet again.

Taliban insurgents seized control of a district in southwestern Afghanistan on Monday as the Afghan police abandoned their post and fled, officials said. The district is the second to fall into Taliban hands this month, and its capture underlines the precarious hold of the government and NATO troops in the remote districts of southern Afghanistan.

Sen. Hillary Rodham Clinton told an audience of black voters on Monday that they would be “breaking barriers” if they supported her for president in 2008 — deliberately signaling that they could still take pride in making history if they chose a woman over one of their own, Sen. Barack Obama of Illinois.

In the midst of several cold spells that have brought temperatures around 10°F cooler than climatology, as well as the first major snowstorm of the year, we are looking at some incoming precipitation that presents a bit of a challenge.

The plan, hatched for months in the arid mountains of North Africa, was to attack the U.S. and British embassies here. It ended in a series of gunbattles in January that killed a dozen militants and left two Tunisian security officers dead.

The power of eminent domain permits government to seize your house, land or business for “public use,” the term used in the constitutional clause which limits this authority. Local governments are increasingly abusing this prerogative, transferring seized land to other private parties rather than putting it to a truly public use like roads and other infrastructure. The recipients are usually corporations represented by powerful lobbies. In 2005, the Supreme Court ruled in Kelo v. New London that a confiscatory transfer to another private party is a legitimate “public use” if the resulting economic activity under the new owners benefits the community. However, <i>every</i> piece of land would generate more employment, more goods and more tax revenue for the confiscators as a commercial establishment than as a private residence. <i>Every</i> home in America is now vulnerable to seizure under eminent domain under this expansive new interpretation of “public use,” not just those along roads which need to be widened.

I read your editorial concerning the apparent lack of evidence for Prof. Sherley’s claims of racism. While your argument seems logical and deliberate, your conclusions are obvious and you have added no value to the debate. Despite my own inquiry into the case, I remain ignorant of the deep facts. As my colleague remarked, “When are they going to tell us what really happened?” Of course there is a lack of evidence, and of course the burden of proof falls upon the accuser. These two points are not in question, as you have clarified in print.

Men’s basketball fought valiantly but faded down the stretch under unrelenting pressure from the Clark University Cougars, falling by a final score of 81-73.

The MIT women’s indoor track and field team scored one of their highest finishes ever at the New England Division III regional meet on Saturday, accumulating 59 points to finish fifth out of 21 scoring teams, behind Williams (151 points), Tufts (109), Amherst (93), and Bowdoin (72.5). 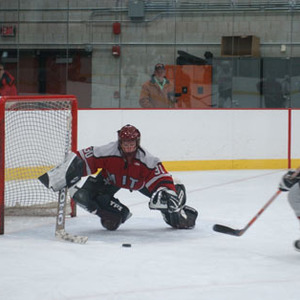 MIT women’s ice hockey finished their most successful season yet with a bittersweet loss against Rochester Institute of Technology on Friday night, 3-2 in overtime. 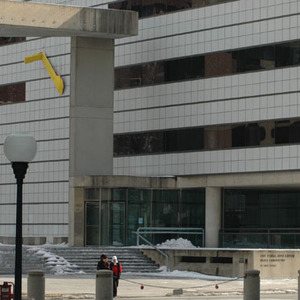 Hackers placed a large yellow crank on the side of the Media Lab on Sunday, in the style of the crank that powers the "One Laptop Per Child" laptops that were developed at the lab. Smaller cranks were "installed" on v...
Robert C. Gens 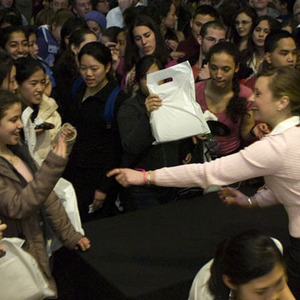 Mariel G. Kozberg ’09 (left, in brown) hands her ticket to Emily Jean Onufer ’10 (in pink) in order to claim her Class of 2009 shot glass and T-shirt.
Eric Schmiedl—The TEch 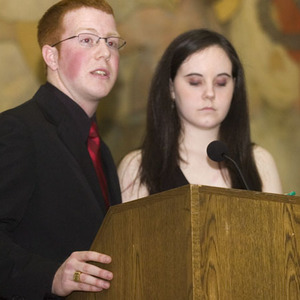 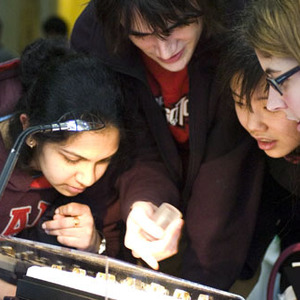 Julia N. Roberts ’10 goes for the save during the women’s ice hockey game on Friday against the Rochester Institute of Technology.
Kristina M. Holton 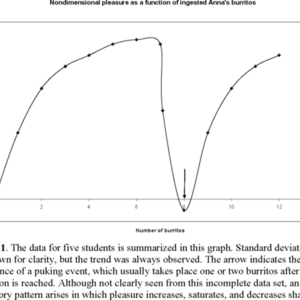 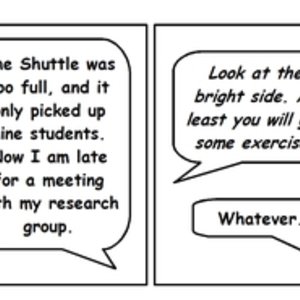 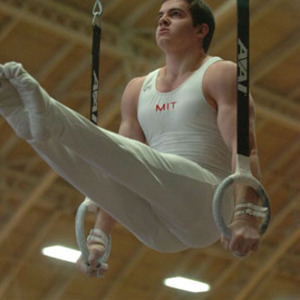 Matthew N. Faulkner '08 plays with one of the many yellow cranks that appeared around campus as part of Sunday's hack.
Martin A. Segado 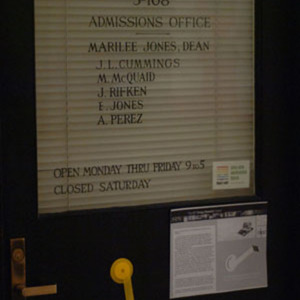 MIT hackers installed cranks on Athena machines, office doors, and numerous other objects on campus "in recognition of MIT's Energy Initiative and the $100 Laptop Project," according to a statement released by the hac...
Michael McGraw-Herdeg—The Tech 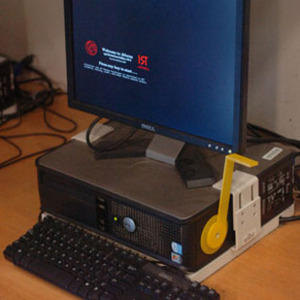 In a statement released to The Tech, the hackers said that the crank hack was "in recognition of MIT's Energy Initiative and the $100 Laptop Project." Some of the cranks installed around campus were accompanied by an ...
Michael McGraw-Herdeg­­—The Tech
All Photos From Issue