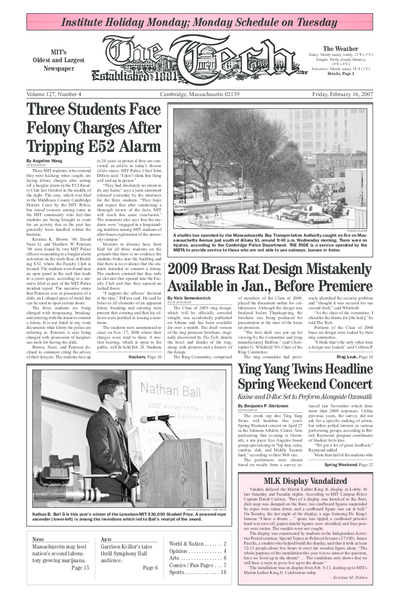 Vandals defaced the Martin Luther King Jr. display in Lobby 10 last Saturday and Tuesday nights. According to MIT Campus Police Captain David Carlson, "Part of a display was knocked to the floor, dish soap was dumped on the floor, two cardboard figures suspended by ropes were taken down, and a cardboard figure was cut in half." On Tuesday, the last night of the display, a sign featuring Dr. King's famous "I have a dream …" quote was ripped, a cardboard person's head was torn off, papier-mâché figures were shredded, and four posters were stolen. The vandals were not caught.

An administrative law judge recommended Monday that a professor at the University of Massachusetts at Amherst be allowed to grow marijuana for research purposes, possibly making the state host to the nation's second laboratory authorized to grow the drug. 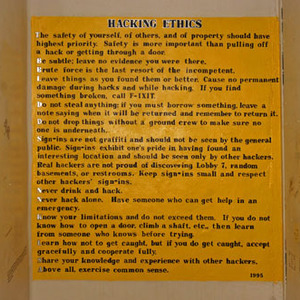 Three MIT students, who contend they were hacking when caught, are facing felony charges after setting off a burglar alarm in the E52 Faculty Club last October in the middle of the night. The case, which was filed in the Middlesex County Cambridge District Court by the MIT Police, has raised concern among some in the MIT community who feel that students are being brought to court for an activity that in the past has generally been handled within the Institute.

The crunk rap duo Ying Yang Twins will headline this year's Spring Weekend concert on April 27 in the Johnson Athletic Center. Also performing that evening is Ozomatli, a ten piece Los Angeles based group specializing in "hip hop, salsa, cumbia, dub, and Middle Eastern funk," according to their Web site.

Federal authorities are investigating gifts and payments that Gov. Jim Gibbons of Nevada received as a congressman from an executive of a software company that got millions of dollars in federal contracts, government officials said Thursday.

A Thousand Dogs and Cats Killed After Disease Outbreak at Shelter

An outbreak of disease that national experts say was of an unprecedented magnitude prompted a weeklong closing of the region's main animal shelter and the killing of about 1,000 dogs and cats.

President Vladimir V. Putin on Thursday added intrigue to the unsettled but widely debated question of who might succeed him as Russia's leader in 2008 when he promoted his minister of defense in an unexpected Cabinet tinkering.

Iraqi Cleric al-Sadr's Location Questioned, Said to be in Iran

Questions and accusations continued to swirl about the whereabouts of the militant Shiite cleric Muqtada al-Sadr on Thursday, and American and Iraqi forces deepened their security push in Baghdad.

Democrats Gamble They Can Finish Senate's Squabbling on Iraq Debate

As the House prepared to pass a symbolic resolution denouncing President Bush's war policy, Senate Democratic leaders on Thursday abruptly scheduled a weekend debate on Iraq in an effort to break a stalemate and avoid impressions that partisan bickering was weighing down deliberations over the war.

A federal bankruptcy judge on Thursday ordered Bear Stearns to pay nearly $160 million to investors in a hedge fund for failing to properly monitor the activities of the fund before it collapsed in early 2000.

President Bush warned on Thursday that he expected "fierce fighting" to flare in Afghanistan this spring, and he pressed NATO allies to provide a bigger and more aggressive force to guard against a resurgence by the Taliban and al-Qaida that could threaten the fragile Afghan nation.

No Warm-up in Sight

Even though Wednesday's Valentine's Day Storm is long gone, the low-pressure is leaving behind windy conditions. The system continued to strengthen over Nova Scotia yesterday causing the pressure gradient to increase and consequently the blustery conditions that will stay with us for another 24 hours. For any curious readers, the 2.5 inches of snowfall in Boston brings the total to 4.3 inches this season. (According to one TV meteorologist, the record lowest snowfall total for the entire season is 9 inches.)

James Sherley wants us to believe that MIT is racist, and that it is because of this institutional racism that he was denied tenure. Unfortunately, his numerous lengthy public statements have supplied no evidence to support his claims. Mr. Sherley's supporters (including at least two whose letters appeared in Tuesday's <i>Tech</i>) support his claims of racism, but to date, none of them have come forward with any corroborating evidence either.

As we reflect on last week's tribute to Martin Luther King Jr., we should recall the words of Gunnar Jahn, who presented him with the Nobel Prize in 1964: "It was not because he led a racial minority in [its] struggle for equality that Martin Luther King achieved fame. Many others have done the same, and their names have been forgotten." Chief among these other catalysts for change was the Student Nonviolent Coordinating Committee (SNCC), a group that offers us great insight into our own capacity as agents of change. Were it not for the SNCC's sustained efforts, "I Have a Dream" would have been little more than poetry on paper.

In early September, nearly a year after universities such as Harvard and Stanford divested from Sudan in response to the ongoing genocide in Darfur, President Hockfield convened the Advisory Committee on Shareholder Responsibility to begin discussing MIT's potential divestment. In response, student movements began both supporting and opposing divestment. Petitions were drafted for each side, with 499 supporting divestment and 94 against it. The divestment issue was hotly debated at both the UA and GSC meetings, resulting in the passage of a resolution by both groups supporting institute wide targeted-divestment by December 31, 2006. A coalition of student groups collaborated to organize a lecture by internationally renowned Sudan expert, Professor Eric Reeves, to help raise awareness in prelude to a divestment decision by the ACSR. Letters both in support and against divestment appeared in <i>The Tech</i>, as well as several front page articles discussing the divestment movement and the overwhelming response by the MIT community.

This past Saturday, the men’s track and field team completed their first undefeated indoor season in four years. The Engineers, despite having only 5 seniors, excelled this season because of multi-event athletes, depth in distance and field events, and a strong freshman class.

Julia C. Zimmerman '09 broke the eight-year-old Institute record for all-around competition by amassing an astonishing 38.175 in a quad-meet at Southern Connecticut State University on Sunday afternoon. She also notched a school-record 9.600 on the vault by performing the first front-handspring-front-layout in the history of Div. III women's gymnastics.

MIT (13-11) shrugged off a sluggish first half by scoring 51 in the second as the Engineers rallied to defeat Lasell College (13-10) 76-68 in Rockwell Cage on Tuesday night. James M. Bartolotta '09 had a great night even by his standards, scoring a game-high 27 points and recording a career-high 21 boards.

In a stunning finish to its most prolific season in over a decade, the MIT varsity wrestling team won its last two regular season matches in last Friday's tri-meet. The Cardinal Gray rallied from a 17-5 deficit to upend U.S. Coast Guard Academy, 25-20, followed by a dominant victory over host Western New England College, 45-3. The Engineers (5-16) capped the campaign with five wins for the first time in 11 years. 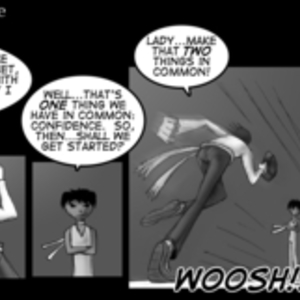 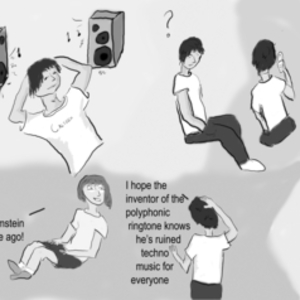 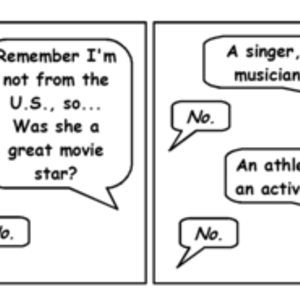 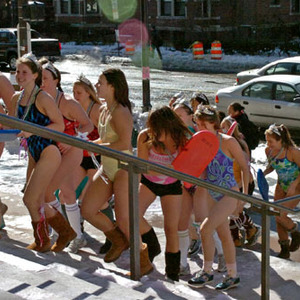 The MIT women's swimming team braves the 20°F weather as they start their annual run down the Infinite Corridor. The run is a traditon before the swimming NEWMAC Championships which will start today at Wellesley College.
David He—The Tech 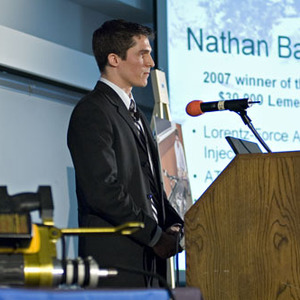 Nathan B. Ball G is this year's winner of the Lemelson-MIT $30,000 Student Prize. A powered rope ascender (lower-left) is among the inventions which led to Ball's receipt of the award.
Omari Stephens—The Tech

MIT hackers abide by a written code of ethics that is painted on the wall of an MIT basement.
Eric D. Schmiedl—The Tech 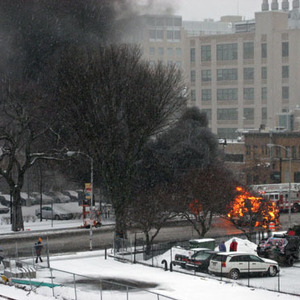 A shuttle bus operated by the Massachusetts Bay Transportation Authority caught on fire on Massassuchetts Avenue just south of Albany St. around 9:40 a.m. Wednesday morning. There were no injuries, according to the Ca...
Teresa Baker
All Photos From Issue