Each year, hundreds of MIT students graduate lacking a fundamental understanding of the effects that anti-Black racism and other systems of oppression have on our present-day technologies, even our own decision-making.

The clear conspiracy on all levels of the Institute to knowingly accept money from a child sex trafficker has been justified and downplayed in a variety of ways.

Breaking self-quarantine to gather in person both puts MIT community members in danger and shows a concerning disregard for publicly available health guidelines.

Recently, MIT Human Resources announced that it will be instituting across-the-board 3% raises for all staff making under $75,000 in 2021. This is a welcome reversal of a policy that MIT announced last April, suspending all merit-based raises for the year due to financial concerns related to COVID. According to MIT’s 2020 Quality of Life Survey (conducted before the pandemic), 65% of staff reported increased cost of living as a source of stress, and 61% said the same about the cost of housing alone. With the additional financial pressure of the pandemic, the wage freeze threatened to push staff even deeper into economic precarity.

In 2020, the MIT Investment Management Company (MITIMCo) joined Climate Action 100+ (CA100+), a global investor-led engagement initiative to ensure that the world’s largest corporate emitters take necessary climate action. Among our peer institutions, only Harvard and Brown are part of CA100+. We commend MIT for joining the ranks of more than 545 investors committed to admirable efforts on climate.

If you are a female MIT student with the last name Wu, Huang, or Chen, you may have received an email in the past two weeks with the subject line “亞州精英 Outstanding Asian.” The email offered $50,000 in compensation for an Asian egg donor, ideally a “21-year-old Chinese MIT student, top in her class,” with “several awards in high school and university.” This concerning request is actually a permutation of an advertisement that The Tech has run twice in the past decade, once in 2012 and once in 2017. The ad, paid for and submitted by the same individual, has not changed much over the years, though the most recent email iteration has swapped out “genius” for “outstanding” and more than doubled the compensation from $20,000 to $50,000. Both the 2012 and 2017 appearances of the ad disturbed MIT community members for its racial stereotyping, tactless wording, and lack of acknowledgment of the medical risks involved with egg donation.

“There are so many fallouts that are going to hit the people who are always hit hardest, even harder,” says Cauble-Johnson. “The chickens have come home to roost here.”

Donald Trump is who he said he was

The 2020 Olympics may have been postponed, but that hasn’t stopped the mental gymnastics of many former Trump-backers as they bend backwards to save their reputations from sinking along with the now-disgraced administration.

We believe there needs to be fundamental change to address ethics and the social implications of science and technology in everything we do at MIT. Leadership statements are a start, but not nearly enough. 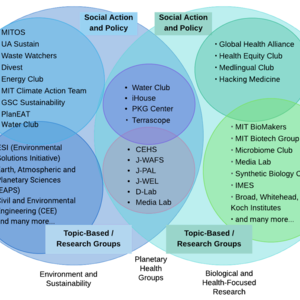 It’s time to connect ourselves with our planet

Planetary health focuses on understanding the human health implications of the rapid transformation of our earth's ecosystems due to anthropogenic changes in our environment. This emerging, transdisciplinary field illustrates the reliance of human well-being on that of the planet.

Autism research from an Autistic perspective

The “Soro Soke” generation of Nigerians

Even in our sorrow, there is an undeniable truth that many of the youth that have taken to the streets during these protests — whether it be the Nigerian streets or the Twitter streets incessantly tweeting with the hashtag #EndSARS — have woken up.

Trump’s refusal to concede could spark a crisis

At this point, it’s an open secret that Donald Trump is probably planning to claim victory in the 2020 election, whether or not he wins. What’s worse, a large swath of the population will likely have his back either way.

Speak up to save Armenian lives

Our dearest wish right now is for the fighting to stop, but that won’t happen until the corrupt, authoritarian Azerbaijani regime calling for violence is stopped.

URM students are suffering today. We shouldn’t bank all of our hopes for a just MIT on a multi-year process when there are many simple changes that can be implemented immediately.

On Sept. 24, 2020, an article was published in the opinion section of The Tech titled “Regaining a culture of sustainability amid a pandemic,” written by Jen Fox, detailing steps MIT Dining could take to reduce the waste produced during COVID operations. To many readers living on campus, where plastic and single-use items seem inescapable, this article hit home. For many of us off campus, this article brought to our attention the feasibility of reusables and the seeming absence of them on MIT’s campus.

Regaining a culture of sustainability amid a pandemic

On college campuses, operational dining facilities now encase everything from hot meals to unpeeled bananas in disposable plastic, transferred in plastic bags to students, who eat with plastic cutlery: all as safeguards against the virus’s spread.

Climate change is not a crisis that will wait several years. Long-term investments into mitigation and adaptation are valuable, but not at the expense of immediate action.

You have the ability to ensure that your values align with a company’s sustainability practices this fall career fair. In a collaboration headed by the Environmental Solutions Initiative (ESI), the new Career Fair Sustainability Initiative is sharing information with students about registered companies’ greenhouse gas emissions and their environmental commitments. By emphasizing the importance of climate-oriented corporate responsibility, ESI hopes employers’ sustainability commitments will appeal to more students, whether they're passionate about climate change or not.