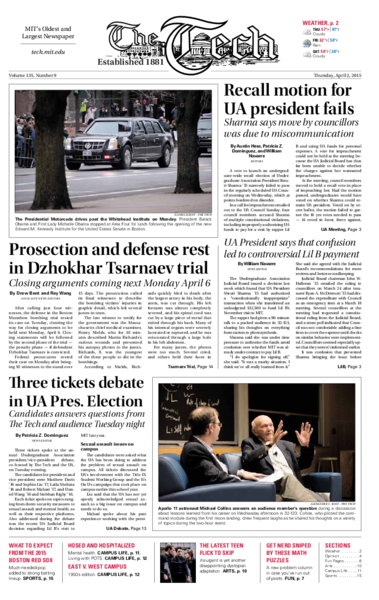 The Undergraduate Association Judicial Board issued a decision last week which found that UA President Shruti Sharma ’15 had authorized a “constitutionally inappropriate” transaction when she transferred an unbudgeted $12,500 to fund Lil B’s November visit to MIT.

The Spring Career Fair will take place today from 11 a.m. to 4 p.m. in the Johnson Athletic Center Rink.

A headline in last Thursday’s issue read: “UA rejects proposals for campus-wide events.” In fact, the proposal was supported by the UA executive board but was ultimately rejected by a vote of the UA council. 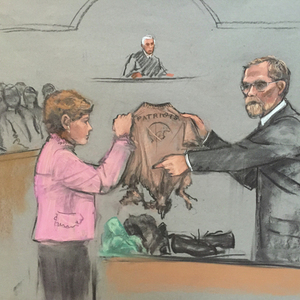 After calling just four witnesses, the defense in the Boston Marathon bombing trial rested its case on Tuesday, clearing the way for closing arguments to be held next Monday, April 6. Closing statements will be followed by the second phase of the trial — the penalty phase — if defendant Dzhokhar Tsarnaev is convicted.

Grad student opens up about testifying in marathon trial

While Dzhokhar Tsarnaev, the surviving suspect in the Boston Marathon bombings and the murder of MIT Police officer Sean Collier, was leaning into Collier’s police cruiser at around 10:30 p.m. on April 18, 2013, MIT graduate student Nathan Harman rode his bicycle past. 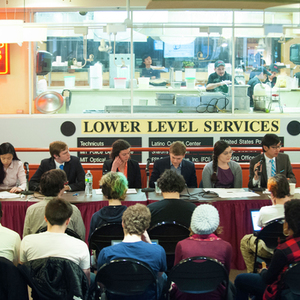 Three tickets spoke at the annual Undergraduate Association president/vice-president debate, co-hosted by The Tech and the UA, on Tuesday evening.

Chance of rain and a warm Friday likely

There will be a chance of rain to end the week as a low-pressure system passing through Ontario might reach out far enough to bring us some rain in Cambridge as it moves eastward to the north. On Friday, the warm air that it brings could bring us the first high above 60°F since Dec. 1, though the possibility of rain could stop us from enjoying it. The temperatures throughout the weekend should stay above freezing with the exception of an hour or two late at night.

A vote to launch an undergraduate-wide recall election of Undergraduate Association President Shruti Sharma ’15 narrowly failed to pass in the regularly scheduled UA Council meeting on Wednesday, which at points bordered on disorder.

While the phrase “gender-inclusive housing” is tossed around somewhat regularly, many people are still unsure about what it exactly means or why, frankly, we care about it at all.

It seems that every week we hear a new story that demonstrates a lack of scientific literacy in right-wing politics. Recently we learned that employees of Florida’s Department of Environmental Protection under the tenure of Gov. Rick Scott (R-Fla.) were instructed not to use the terms “climate change” and “global warming” in official correspondences. Sen. James Inhofe (R-Okla.) recently brandished a snowball on the Senate floor as evidence that global warming is a hoax. Last month Gov. Scott Walker (R-Wis.) refused to state whether or not he believed in the theory of evolution, and who can forget former Rep. Todd Akin’s (R-Mo.) famous gaffe about “legitimate rape”? 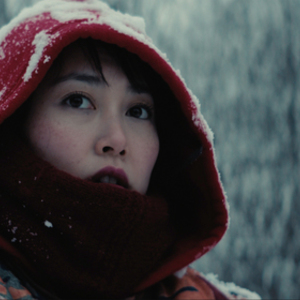 Kumiko, the Treasure Hunter: An unexpected spin on the adventure movie

I felt an overwhelming amount of empathy while watching Kumiko, the Treasure Hunter — both for Kumiko and the characters who interact with her. Kumiko is more than a little crazy, but she is brave enough to depart on a journey that most of us would only dream of. She is extremely depressed in Japan, so she leaves her job and her family behind in search of a hidden treasure she believes she will find in Fargo, Minnesota.

As part of the Celebrity Series of Boston, an initiative that brings famous performing artists to the Boston area, Arturo O’Farrill and Donald Harrison set the Berklee Performance stage aflame with flying fingers on the piano and alto sax, respectively. The pair and the Grammy winning Afro-Latin Jazz orchestra (founded by O’Farrill himself) had audiences shimmying in their seats during a performance that earned three standing ovations. 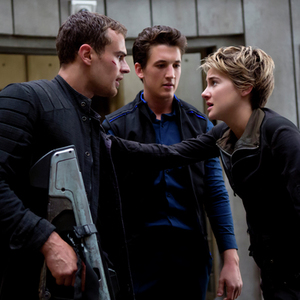 A cast full of teenage heartthrobs? Check. Based on a popular Young Adult dystopian book series? Check. Was the book better? Probably. 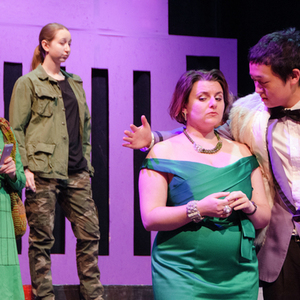 The MIT Shakespeare Ensemble put on their production of Love’s Labour’s Lost on March 19–22 in La Sala de Puerto Rico, directed by Liz Adams. Despite the challenges of performing one of Shakespeare’s more esoteric plays, the Ensemble executed it with both talent and enthusiasm.

After a forgettable first-to-worst season in 2014, the Red Sox are looking to bounce back for the second time in three years. After finishing with the highest slugging percentage in 2013, the Red Sox finished 14th in the 15-team American League in that same category. Quite simply, the bats that came alive the year before were largely quiet either due to injury (Pedroia, Napoli, Victorino) or were downright unproductive for large parts of the season (Boagerts, Nava, Gomes).

Carrying a 5.0 GPA, Benjamin Lin ’17 was presented with the NCAA Elite 89 Award at the NCAA Fencing National Championship held this weekend at Ohio State. He is the second consecutive fencer to receive this accolade after Joey Rafidi ’14 was tabbed for this honor last year. Since the Elite 89 program was established during the 2009-10 academic year, the Engineers have collected eight awards.

In a game played in steady snow throughout, MIT and the U.S. Coast Guard Academy opened the New England Women’s and Men’s Athletic Conference (NEWMAC) men’s lacrosse season on Saturday afternoon (March 28). The Engineers scored five goals in the first period and never looked back as they took a 14-6 victory over the Bears.

Following a tight first half, Springfield College outscored MIT, 11-6, in the second frame to secure a 16-9 victory in a NEWMAC women’s lacrosse game on Saturday afternoon. Senior Michelle Dorsey paced the Pride (8-2, 2-0 NEWMAC) with five goals and two assists while Emily Young ’18 led the way for the Engineers (7-1, 1-1 NEWMAC) with fours goals and five draw controls.

I am an MIT alum, and I suffer from POTS (postural orthostatic tachycardia syndrome). Before reading about the tragic news of MIT student Christina E. Tournant’s death, most of you had probably never heard of POTS. Most of the doctors that I have seen have also never heard of POTS. However, more people have POTS than multiple sclerosis (MS) or amyotrophic lateral sclerosis (ALS). Experts estimate that POTS impacts one to three million Americans, 85 percent of whom are female.

Technical Problems is a new weekly column consisting of puzzles and math problems intended to be accessible to undergraduates of all majors. The column will feature new problems each week as well as solutions to problems posed in previous weeks. If you are interested in having one or more of your solutions published in the column, please send them to general@tech.mit.edu.

Reminiscences of MIT in the mid-1950s

Heading off to the world-renowned Massachusetts Institute of Technology in late August, 1954, I believed that I was doing a public service to the nation. America was in the early stages of the Space Race with the Soviet Union, and my guidance counselor at Dayton, Ohio’s Fairmont High School had convinced many of us graduating seniors that it was a civic duty to become engineers and help advance the nation’s chances of winning that historic race. Little did I know then that beating the Commies in space, and to the moon, would have little to do with my activity at MIT. 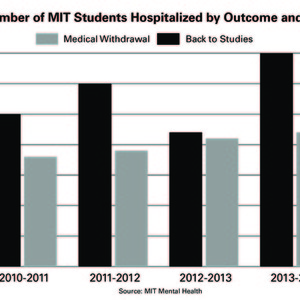 The hilly road back to MIT

My friend Emily was one of the many MIT students admitted to McLean, a psychiatric hospital, last semester after the death of Phoebe Wang. 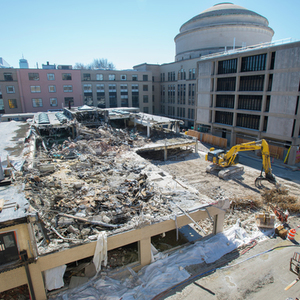 Building 12 as seen from Building 24 on Sunday, March 29. The building, about one quarter of the way through demolition, will make way for the new MIT.nano facility, which is expected to be complete by 2018.
Alexander c. bost—The Tech 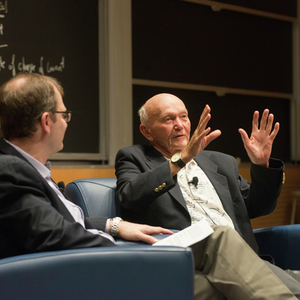 Apollo 11 astronaut Michael Collins answers an audience member’s question during a discussion about lessons learned from his career on Wednesday afternoon in 32-123. Collins, who piloted the command module during the ...
Alexander c. bost—The Tech 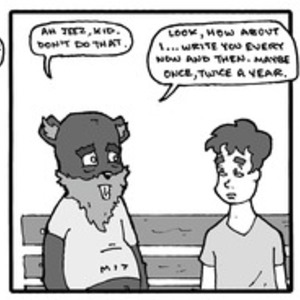 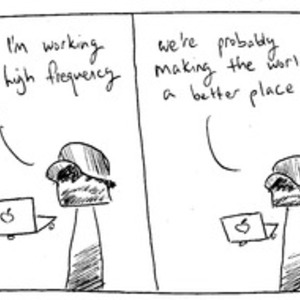 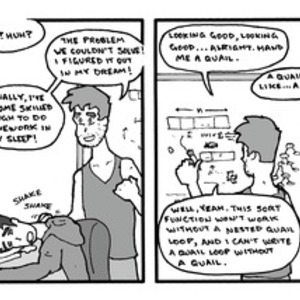 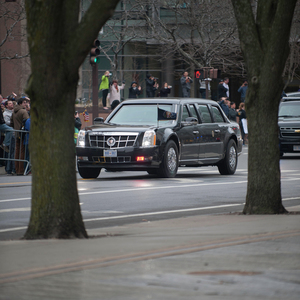