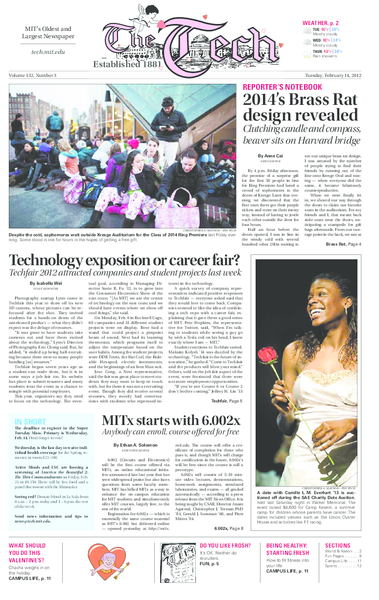 Susan J. Hockfield, MIT's 16th president, announced this morning her decision to step down from the presidency after 7 years.

Photography startup Lytro came to Techfair this year to show off its new 3D camera, whose pictures can be refocused after the shot. They invited students for a hands-on demo of the unreleased product — what they didn’t expect was the deluge of resumes.

6.002 (Circuits and Electronics) will be the first course offered via MITx, announced late last year that has seen widespread praise but also faces questions from some faculty members. MIT has billed MITx as a way to enhance the on-campus education for MIT students and simultaneously offer MIT courses, largely free, to the rest of the world. 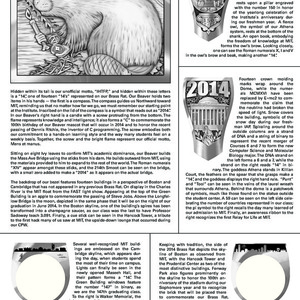 By 4 p.m. Friday afternoon, the promise of a surprise gift for the first 50 people in line for Ring Premiere had lured a crowd of sophomores to the doors of Kresge. Later that evening, we discovered that the first ones there got their purple tickets and went on their merry way, instead of having to jostle each other outside the door for four hours.

The deadline to register in the Super Tuesday Mass. Primary is Wednesday, Feb. 14. Don’t forget to vote!

By enrolling in an MITx course, I agree that I will:

U.S. and European antitrust regulators on Monday approved Google’s acquisition of the cellphone maker Motorola Mobility without formal conditions, paving the way for the search giant to compete directly with its new archrival, Apple.

Athens shaken by riots after vote for austerity

ATHENS, Greece — The acrid stench of tear gas permeated central Athens on Monday and the husks of burnt-out buildings still smoldered after a night of rioting following the Greek Parliament’s vote to approve austerity measures in exchange for more rescue financing.

Warde J. Manuel, who raised expectations on the playing field and in the classroom in six years as the athletic director at Buffalo, was introduced Monday as Connecticut’s new AD at a time when the Huskies’ Men’s Basketball team is dealing with the fallout from academic issues and the health concerns of its Hall of Fame coach, Jim Calhoun.

Warmth and lack of snow will continue this week

With the exception of a few cold spurts (like this past Sunday), this winter has been marked by a general trend of above average temperatures. This weather will continue this week, with high temperatures in the mid to upper 40s (8°C); 10°F (-12°C) above normal. It has also been a dry winter, with only 2.74&amp;quot; of precipitation occurring since Jan. 1, compared to a climatological value of 4.67&amp;quot;. The first two weeks of February have also been unusually dry, with only 0.07&amp;quot; of precipitation compared to a usual month-to-date value of 1.31&amp;quot;. Not only has this winter featured a lack of precipitation — Boston has had a lack of snowfall in particular. Since Dec. 1, Boston has recorded 6.8&amp;quot; of snow, far less than the climatological value of 26.5&amp;quot; (and miniscule, compared with last season’s 71.2&amp;quot;). Unfortunately for those hoping for snow, it doesn’t appear to be in the cards this week. There is a system coming through on Thursday and Friday that should bring measurable precipitation, but it looks to be only in the form of rain.

WASHINGTON — Congressional Republicans on Monday backed down from a demand that a payroll tax holiday be paid for with reductions in other programs, clearing the way for an extension of the tax cut for 160 million Americans through 2012.

The Chinese Communist Party has long felt threatened by overseas websites and social media outlets, but the recent detention of a California physicist who says he was beaten by Chinese security agents seeking the password for his Twitter account suggests how far the government will go in its battle against a freewheeling Internet.

Apple, in shift, pushes an audit of sites in China

Responding to a growing outcry over conditions at its overseas factories, Apple said Monday that an outside organization had begun to audit working conditions at the plants where the bulk of iPhones, iPads and other Apple products are built, and that the group would make its finding public.

On Saturday, the MIT Women’s Basketball team made a remarkable comeback against Springfield College, winning 51-50. MIT has not beaten Springfield since 2003, and with this win they bring their record for the season to 10-12 (the highest since 2008). Springfield dominated the first half, with MIT trailing 27-17 at halftime. However, the Engineers were able to capitalize on Springfield’s turnovers in the second half and outscored the Pride 34-23. This win was not sealed until the end — actually, until after the clock had stopped. Alexxis R. Isaac ’15 made two free throws at the very end of the game to complete this comeback victory. Other notable players from the game include freshman Mari R. Kordell, who made 19 points to become the high scorer for the game, and Anna L. Merrifield ’13 who had seven assists. The Engineers will play Wheaton on Wednesday to hopefully continue their NEWMAC winning streak.

This weekend, the No. 14 ranked MIT Men’s Track and Field team competed in a pair of nonscoring invitational meets, one at home and another across the river at Boston University. The Engineers were focused on posting strong individual performances just a week ahead of the New England Division III championship.

No. 5 MIT withstood a late rally by Clark University to win, 63-60, in overtime in the NEWMACs conference game. With the win, the Engineers improve to 10-1 in the conference and secure their second NEWMAC regular season title in three years. MIT’s 22nd victory in 23 games this season ensures that it will host the conference semifinals and championship in two weeks. 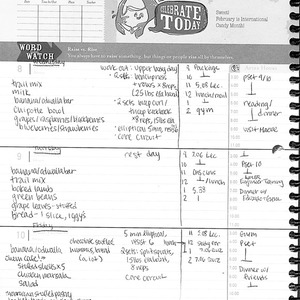 Fall in love with fitness at MIT

Everyone at MIT has a unique fitness story. Some of us are varsity athletes or gym rats, who somehow manage to pack 12 to 20 hours a week of sports into our already bursting schedules. Others gave up on exercise long ago due to the demands of classes and research. Some of us lie somewhere in between: former athletes who’ve fallen out of condition, those who want to work out, but don’t know how or don’t seem to be very good at it. Some of us love running; some of us hate it. Some of us are too self-conscious to try. One thing each of us has in common is a desire to be healthier. Even top athletes aspire to greater heights. Unfortunately, whether you’re a novice or a pro, at a place like MIT, sometimes these goals can seem impossible to achieve.

Valentine’s Day isn’t the only day for love

Ciao Amore! Today is Valentine’s Day, the most [enter your adoring or snide comment here] day of the year. Maybe you’ve already heard those public serenades isolating someone’s sweetheart in an awkward, yet adorable, way. Or perhaps you’ve avoided such encounters like the plague? Either way, it is Valentine’s Day and here are some things one can do. But first, humor me and read about my “beef” with this holiday. 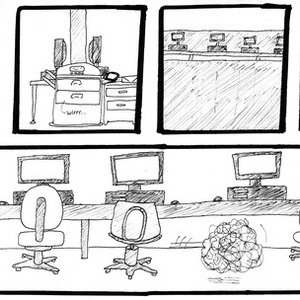 Text and graphics courtesy of the 2014 Ring Committee, http://classof2014.mit.edu/ring/design.html. 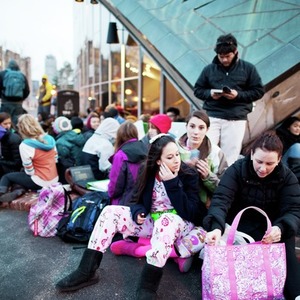 Despite the cold, sophomores wait outside Kresge Auditorium for the Class of 2014 Ring Premiere last Friday evening. Some stood in line for hours in the hopes of getting a free gift.
Christopher A. Maynor—The Tech 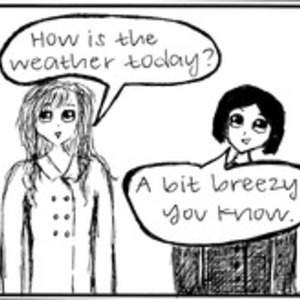 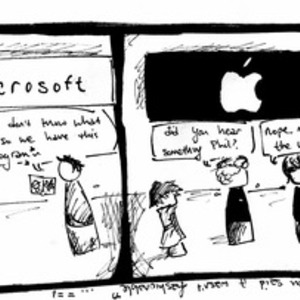 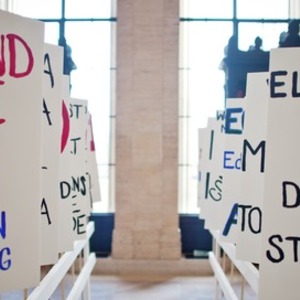 The final project of the Martin Luther King, Jr. Design Seminar (17.922) was on display in Lobby 10 on Friday. The exhibit, which highlights issues including racial discrimination and economic disparity, will be up th...
Christopher A. Maynor—The Tech

Your workout book doesn’t have to be pretty, or even on an agenda from 2012. It’s the thought that counts!
Allison Hamilos 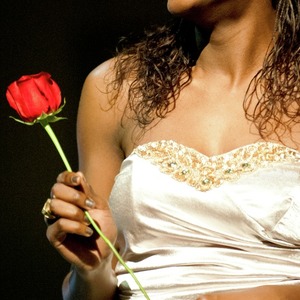 A date with Camille L. M. Everhart ’13 is auctioned off during the SAE Charity Date Auction, held last Saturday night in Walker Memorial. The event raised $6,600 for Camp Kesem, a summer camp for children whose parent...
Christopher A. Maynor—The Tech
All Photos From Issue