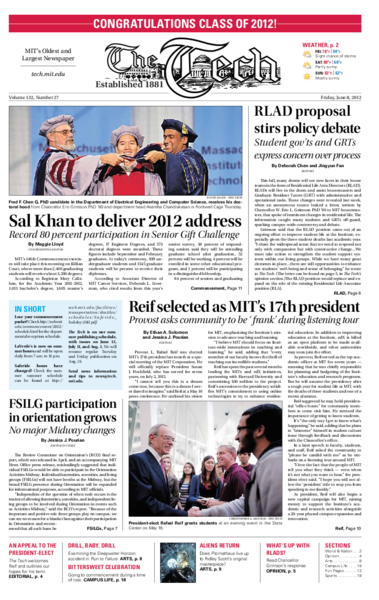 Faculty push back against MIT 2030 in latest FNL

Faculty resistance to MIT 2030 is increasing.

The Review Committee on Orientation’s (RCO) final report, which was released in April, and an accompanying MIT News Office press release, misleadingly suggested that individual FSILGs would be able to participate in the Orientation Activities Midway. Individual fraternities, sororities, and living groups (FSILGs) will not have booths at the Midway, but the broad FSILG presence during Orientation will be expanded for informational purposes, according to MIT officials. 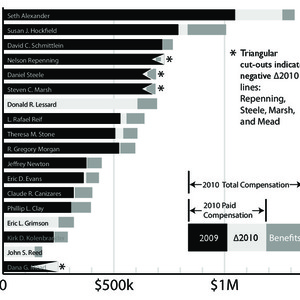 Provost L. Rafael Reif was elected MIT’s 17th president last month at a special meeting of the MIT Corporation. He will officially replace President Susan J. Hockfield, who has served for seven years, on July 2, 2012. 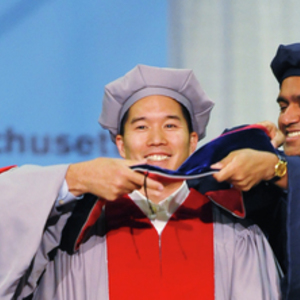 MIT’s 146th Commencement exercises will take place this morning on Killian Court, where more than 2,400 graduating students will receive about 3,200 degrees.

This fall, many dorms will see new faces in their house teams in the form of Residential Life Area Directors (RLAD). RLADs will live in the dorm and assist housemasters and Graduate Resident Tutors (GRT) with administrative and operational tasks. These changes were revealed last week, when an anonymous source leaked a letter, written by Chancellor W. Eric L. Grimson PhD ’80 to MIT housemasters, that spoke of imminent changes in residential life. The information caught many students and GRTs off-guard, sparking campus-wide controversy and debate.

Outside compensation of MIT officers serving as directors of public companies

Outside compensation of MIT officers serving as directors of public companies

The Tech has filed public records requests seeking additional information about the accident investigation into the death of Phyo Kyaw ’10. Kyaw was killed on Dec. 27 when his bicycle was run over by an 18-wheeler at the intersection of Massachusetts Avenue and Vassar Street.

Iran threatens delays in talks on its nuclear program

Iran raised the possibility Wednesday of delaying or canceling the resumption of nuclear talks with the big powers, scheduled in less than two weeks, because of what it called dithering by the other side in holding preliminary meetings aimed at ensuring some success.

KABUL, Afghanistan — Violence took the lives of at least two dozen Afghan civilians and possibly many more Wednesday, making it the deadliest day for Afghan civilians so far this year. The day included a complex suicide attack in Kandahar City and a NATO airstrike that Afghan officials and residents said had killed women and children in eastern Afghanistan, according to Afghan officials and residents. 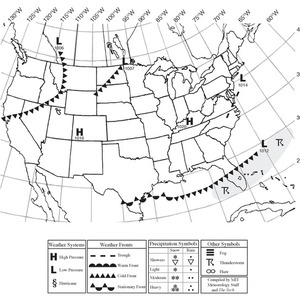 A weak, yet pesky, area of low pressure lingered just off Cape Cod earlier this week. The system brought cold temperatures, cloudy skies, rain, and breezy conditions. This system appeared “stuck” in one location on the weather forecast models from this past week. But why? The answer was evident in the central Atlantic Ocean, where a much larger low pressure center was parked, preventing the weaker low from exiting our area.

BERLIN — The bargaining has begun over a deal to rescue Spain’s ailing banks, confronting Europe with urgent choices about whether to try to enforce onerous bailout terms on Madrid as the crisis spreads to the region’s largest economies.

The Tech welcomes L. Rafael Reif to his new job at president, and applauds the presidential search committee for meaningfully incorporating student and community input into the process. Reif is a good choice — his vast academic and institutional experience at MIT and solid track record as provost make us optimistic he’ll handle the president’s job well. As he prepares to take up his new mantle, we have a few things for him to think about.

Last Tuesday, I wrote to the housemasters with the announcement that I had decided that the role of the Residential Life Associate in the residence halls should be enhanced, so that the residential system could better support undergraduates living on campus. The plan I announced would increase the number of RLAs, so that one could be assigned to almost every dormitory, and would increase the required education and experience, so that students, housemasters, and GRTs would have access to a higher level of expertise.

Editors note: The following letter was addressed to Chancellor Eric Grimson PhD ’80 and the Division of Student Life. It was signed by over 40 GRTs (see sidebar).

An infographic published on May 15 incorrectly placed Student Support Services (S^3) under the Division of Student Life (DSL) and stated that the DSL “oversees student support services.” The S^3 office reports to the Dean for Undergraduate Education (DUE). 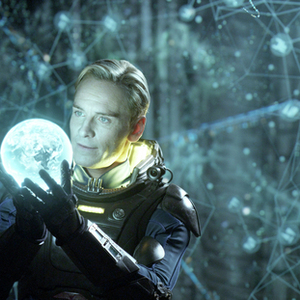 I had high expectations going into Prometheus. Ridley Scott finally took the director’s chair again to create a pseudo-prequel to Alien — one of my favorite sci-fi films — which he directed in 1979. Scott did such an amazing job with Alien, so how could Prometheus not be good? 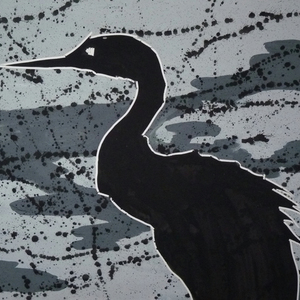 The horrifying image of a muddy column of oil rushing incessantly from the earth’s guts into the deep blue waters of the Gulf is forever branded in my memory. As I watched in disbelief the live video feed from the bottom of the sea, showing the Macondo well vomiting poison into the ocean, week after week, impervious to the incompetent attempts of BP to kill it, there was one question that kept bouncing in my head: how on earth did this happen?

I remember the exact moment when I realized some of Jesus’ utterances only made sense as poetry. The time was an evening in early January 1994. The place was the public square in Chitré, a small city in Panama’s countryside. While hundreds of youngsters rode their new Christmas bikes in the tropical summer breeze, I — at the time an 18-year-old devout Christian — sat quietly inside my father’s car, reading my Bible under a dim yellowish light. The version was Nácar-Colunga’s direct translation from the original Greek and Hebrew into my native Spanish. I remember the exact passage I was trying to assimilate: Matthew 6:25-34. “Do not worry about your life,” said the Lord. “Look at the birds of the air … Consider the lilies of the field.” And then the inspired prescription: “Therefore do not worry about tomorrow.”

Taking a swing at the French Open

The 2012 French Open is in full swing, and the men’s side is still in contention, competing for the top spot at the Roland Garros in Paris. Top-seeded Novak Djokovic of Serbia will face third-seeded Roger Federer of Switzerland in the upcoming semifinals. In the process of reaching this stage, the 30-year-old Federer has dropped five sets, one in each of his second through fourth round matches and two in his quarterfinal match against the ninth-seeded Argentinian Juan Martin Del Potro. Djokovic won his first three matches of the tournament in straight sets but had to grind out his last two, both five-setters.

Life can change in an instant — the instant you get that acceptance letter, the instant you walk across that stage, the instant someone dear to you dies. I never imagined that my life would change so drastically before graduation — that I would be graduating without my partner, the guy who loved and supported me for the bulk of my MIT undergraduate career. 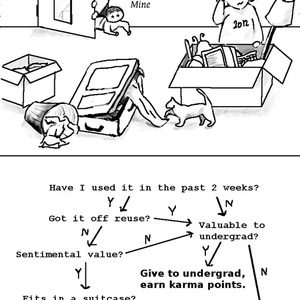 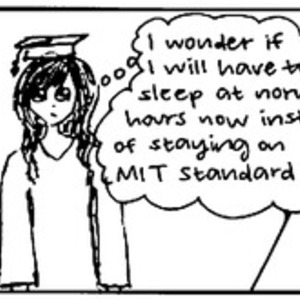 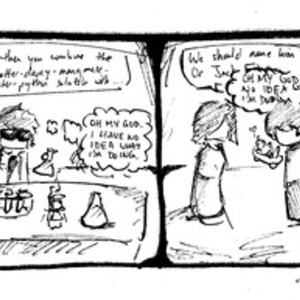 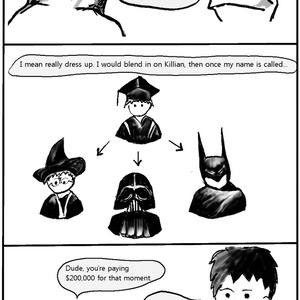 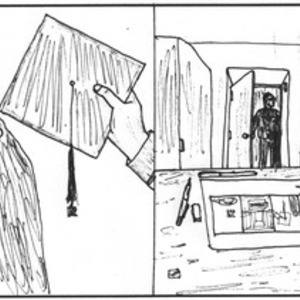 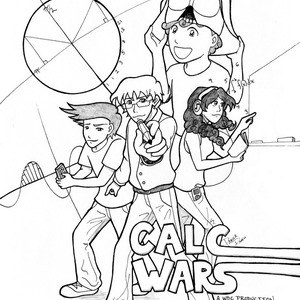 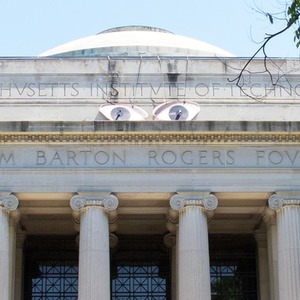 Fake eyes appeared perched atop Lobby 7 on May 17.
John A. Hawkinson—The Tech 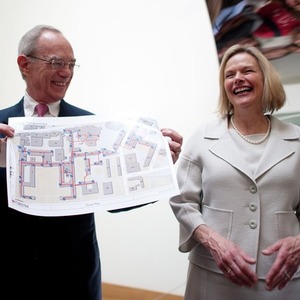 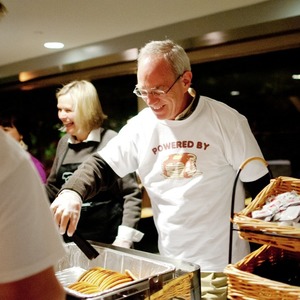 Reif with pancakes! The president-elect serves pancakes to MIT students at the Flapjacks for Finals event at Lobdell on May 20.
Tiffany Ira Huang—The Tech 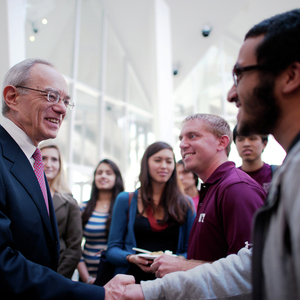 President-elect Rafael Reif greets students at an evening event in the Stata Center on May 16.
Christopher A. Maynor—The Tech 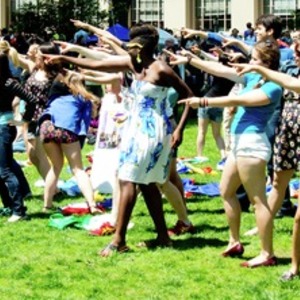 The flash mob points to President Susan Hockfield as the music is altered to include Hockfield’s name.
David Da He—The Tech 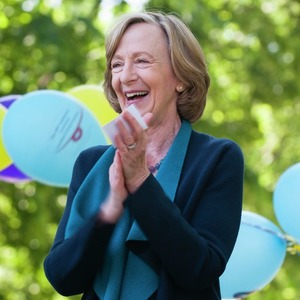 President Hockfield is taken by surprise at the appearance of a flash mob during the “Hockfield Day” picnic, held on May 17 in Killian Court.
Tiffany Ira Huang—The Tech 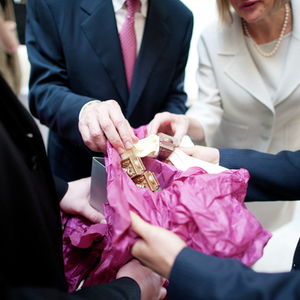 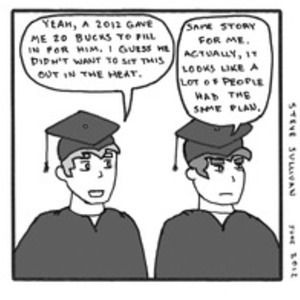 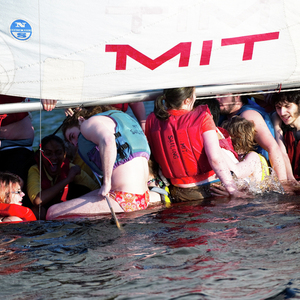