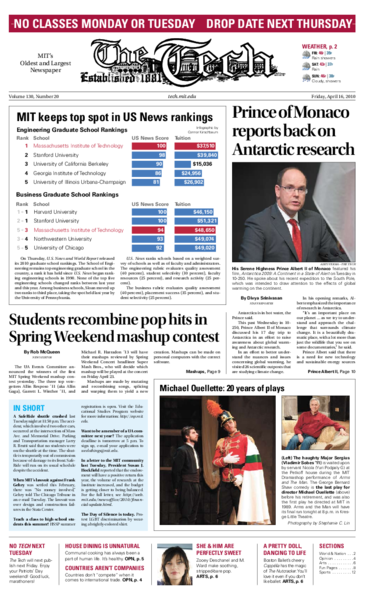 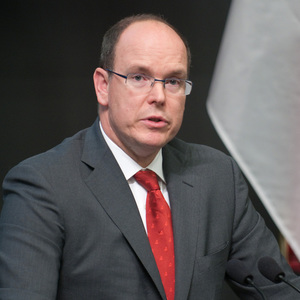 Prince of Monaco reports back on Antarctic research

Antarctica is in hot water, the Prince said.

The UA Events Committee announced the winners of the first MIT Spring Weekend mashup contest yesterday. The three top vote-getters Allin Resposo ’11 (aka Allin Gaga), Garrett L. Winther ’11, and Michael R. Harradon ’13 will have their mashups reviewed by Spring Weekend Concert headliner Super Mash Bros., who will decide which mashup will be played at the concert on Friday April 23.

An article on Tuesday about the Campaign for Students protest misquoted Fangfei Shen, who said “Some people might see this $1,800-a-year as a disincentive to live in McCormick or some other non-dining dorm and they might be incentivized to live in dorms like East Campus just because it is cheaper.” The correct figure is $1,800, not $800.

PARIS — A dark and spectacular volcanic cloud shrouded much of northern Europe on Thursday, forcing airlines to cancel thousands of flights as it drifted at high altitude south and east from an erupting volcano in Iceland. The shutdown of airspace was one of the most sweeping ever ordered in peacetime, amid fears that travel could continue to be delayed days after the cloud dissipates.

ST. LOUIS — After a career as a corporate executive with her name in brass on the office door, Amparo Kollman-Moore, an immigrant from Colombia, likes to drive a Jaguar and shop at Saks. “It was a good life,” she said, “a really good ride.”

The last week and a half of weather has been quite variable. After record highs last Wednesday, the past week has seen seasonal temperatures and with the exception of last Friday, has been relatively dry. Unfortunately, that trend will not continue this weekend. The high pressure that has been providing us with sunshine the last few days has been pushed out to sea by a low pressure system coming down from Ontario, Canada. The front associated with this system will bring us cool temperatures and rain showers today, with highs 10-15°F below normal.

BISHKEK, Kyrgyzstan — The deposed president of Kyrgyzstan resigned and left the country for neighboring Kazakhstan on Thursday under an agreement brokered by Russia, regional leaders and the Obama administration. Within hours, security forces swooped in to arrest one of his brothers and a political ally.

Modern scientific reasoning places just emphasis on the importance of natural human needs. The field of human ethology (study of natural behavior), which incorporates aspects of evolutionary biology and psychology, indicates that life is molded by eons of environmental pressure. We lived as hunter-gatherers for millions of years, a life-style which still exists in many wild corners of the world.

In the previous article, I tried to explain the core logic behind why trade is mutually beneficial, and not a “competition” as the Obama Administration has been describing it. At some level, many non-economists seem to accept the argument I offered, but retain some lingering doubt. They concede that free trade is beneficial (or is at least necessary to avoid some greater loss) but they still cannot shake the feeling that trade must have winners and losers. After all, isn’t our growing trade deficit with China evidence that we are being “beaten?”

The challenges humanity faces in the 21st century — from the stable supply of energy in a carbon constrained world to the delivery of new products based on the fusion of engineering and life sciences — cannot be accomplished by individuals or technology on its own. We need to cultivate technically astute people who can apply their skills to guide and lead the development of socially, environmentally, and economically acceptable solutions to technical problems.

After reading the statistics posted in The Tech about the membership of the Campaign for Students (notably, 39 percent from East Campus, 8 percent from Random Hall, 6 percent from Burton-Conner, and 3 percent from dorms with house dining) I am going to speak as a member of one of the dorms with a dining hall.

Two guests from MIT Medical attended Senate this past Monday night. The two discussed upcoming budget changes within MIT Medical and the potential impact on students. Medical presented a proposal to close urgent care facilities at MIT from 12 a.m.–6 a.m., citing declining visits during these hours. Students who phone Medical would be consulted by a trained nurse following protocols that would assist the student with obtaining the appropriate care. In the case of emergencies, students would be transported to Mount Auburn hospital. Students were most concerned about the preservation of Medical’s Good Samaritan and confidentiality policies. MIT Medical reassured students that Good Samaritan policies were not changing, but that the confidentiality protocol is left up to Mount Auburn and further discussion with the hospital may be needed. 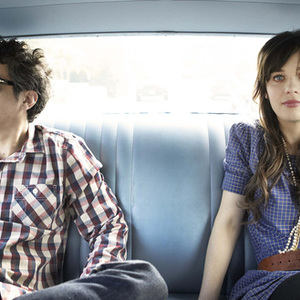 Zooey Deschanel is the pinup girl of the indie scene. Her porcelain doll features and piercing blue eyes, framed in a mass of raven waves, are her trademarks. She shows up on the red carpet in divine vintage pieces. Oh, did I mention that her husband is Ben Gibbard, the frontman of Death Cab for Cutie? All she has to do as the indie sweetheart is continue her role as a vivacious sprite in cult-indie films and maybe dabble in an album or two. Her music duo with M. Ward, She and Him, released their sophomore album <i>Volume Two</i>, much to the rejoicing of her devoted followers.

Those of you who follow what I write might know of my interest in the interplay between a country’s inherent culture and the music it produces. Italian guitarist Fabrizio Sotti is an apt example. Since the death of Marcus Aurelius, the Italians haven’t quite been renowned for their sense of urgency. While the higher-browed and straighter-lipped of their European brethren may poke fun at the sloth of this Mediterranean cradle of the West (here’s looking at you Berlusconi), you have to give them credit. After all, while you’re criticizing Italy for its mafia-style government and easy-going lifestyle, an Italian man is probably sleeping with your girlfriend. Italy may be the degenerate skeleton of the Roman Empire, but damn they’re smooth. Their plethora of Lotharios only adds to the stereotypical image of the tall, dark, and handsome Italian.

If you would not exactly describe yourself as a balletomane, but rather the can-handle-seeing-the-Nutcracker-once-every-holiday-season type, then consider challenging yourself with Saint-León’s <i>Coppélia</i>,<i> </i>choreographed by George Balanchine and Alexandra Danilova, performed by the Boston Ballet Company from now until April 18. It includes all the entertaining elements of <i>The Nutcracker </i>— a bit of fairy-tale magic, toys coming to life, the impressive array of costumes — plus an extra act!

The nationally-ranked No. 7 MIT Men’s Volleyball team reached several milestones during the North East Collegiate Volleyball Association (NECVA) Championship Tournament held this weekend in Hyannis, MA. The Engineers swept Newbury College (30-23, 30-15, 30-22) in the opening round on Friday and D’Youville College (30-18, 30-26, 30-20) in the quarterfinals on Saturday. That afternoon, however, the Cardinal and Gray fell to eventual champion, Nazareth College, 30-28, 30-27, 31-29. MIT’s first victory over D’Youville in eight meetings put it in the semifinals for the second time in program history (the last trip occurring in 2006). The Cardinal and Gray also recorded its first-ever 30-win season as it finished with an overall ledger of 31-8.

His Serene Highness Prince Albert II of Monaco featured his film, Antarctica 2009: A Continent in a State of Alert on Tuesday in 10-250. He spoke about his recent expedition to the South Pole, which was intended to dr...
Aditi Verma—The Tech 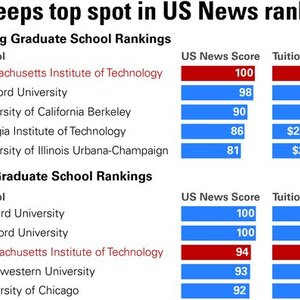 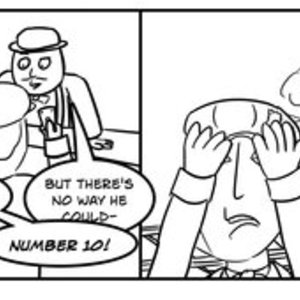 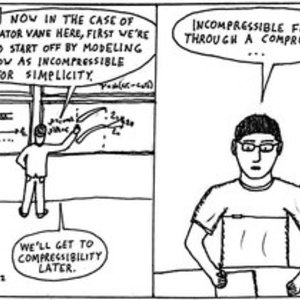 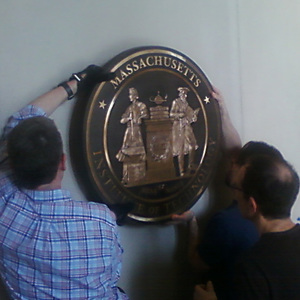 Workers from Cadwell Sign Co. lift a plaque into place in Lobby 7 on Tuesday. A gift of the Class of 2003, the plaque is mounted on the east wall, just right of the Infinite Corridor entrance.
John A. Hawkinson—The Tech 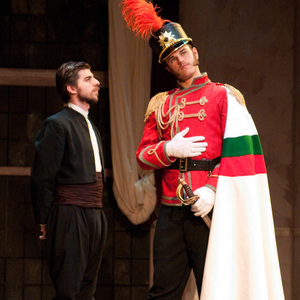 The haughty Major Sergius (Vladimir Sobes ’11) is waited upon by house servant Nicola (Yuri Podpaly G) at the Petkoff house during the MIT Dramashop performance of Arms and The Man.
Stephanie C. Lin—The Tech 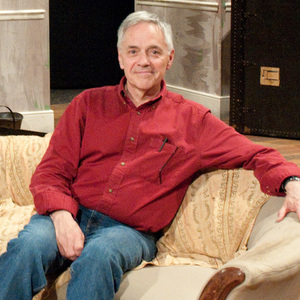 Michael Ouellette poses on the set of his last production at MIT. Arms and the Man was the first play he directed at MIT over 20 years ago, and will have its final run tonight at 8 p.m. in Kresge Little Theatre.
Stephanie C. Lin—The Tech
All Photos From Issue