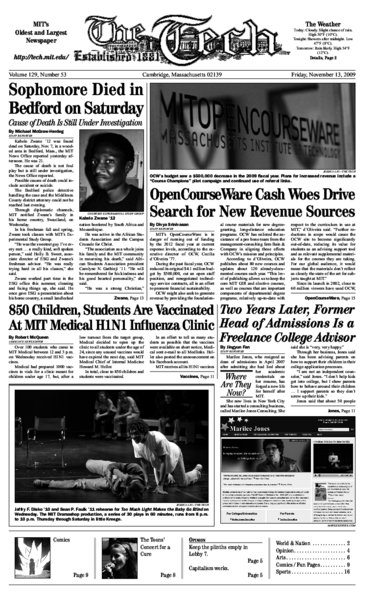 Administrators believe that “as far as we now know,” missing graduate student Guangtao Cong “is safe and we know his whereabouts,” said Dean for Graduate Education Steven R. Lerman ’72 on Saturday. 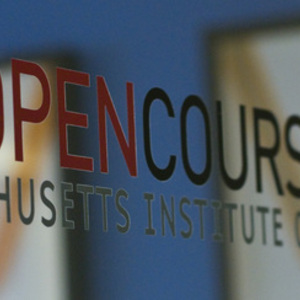 MIT’s OpenCourseWare is in danger of running out of funding by the 2012 fiscal year at current expense levels, according to the executive director of OCW, Cecilia d’Oliveira ’77. 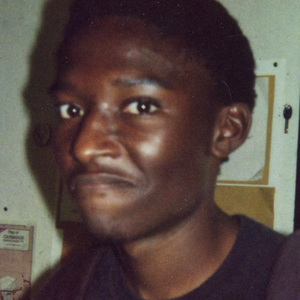 Sophomore Died in Bedford on Saturday

Kabelo Zwane ’12 was found dead on Saturday, Nov. 7, in a wooded area in Bedford, Mass., the MIT News Office reported yesterday afternoon. He was 21. 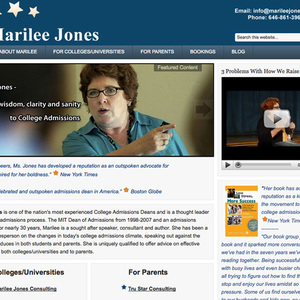 Marilee Jones, who resigned as dean of admissions in April 2007 after admitting she had lied about her academic credentials on her resume, has forged a new life for herself after MIT.

Over 100 students who came to MIT Medical between 12 and 3 p.m. on Wednesday received H1N1 vaccines.

A plan for grass-roots aid using small sums of money and village councils has nurtured modest but important changes in this corner of Afghanistan, raising hopes that it could become a model in a country where official corruption and a Taliban insurgency have frustrated many large-scale development efforts.

The Federal Housing Administration, the government agency whose loan-insurance programs have become a crucial source of support for the housing market, said Thursday that its cash reserves had dwindled significantly in the last year as more borrowers defaulted on their mortgages.

Many Americans do not think twice about taking medicines to prevent heart disease and stroke. But cancer is different. Much of what Americans do in the name of warding off cancer has not been shown to matter, and some things are actually harmful. Yet the few medicines proved to deter cancer are widely ignored.

German prosecutors have abandoned investigations into one of the main figures suspected of involvement in the killing of a former KGB officer in London three years ago without bringing charges, according to accounts on Thursday by the prosecutors and the man in question.

Settlement Between AMD and Intel Will Not End Their Woes

The giant chip maker Intel, facing antitrust challenges around the world, announced Thursday that it would pay $1.25 billion to settle its long-running disputes with its smaller rival, Advanced Micro Devices.

From the edge of the Thames River in New London, Conn., Michael Cristofaro surveyed the empty acres where his parents’ neighborhood had stood, before it became the crux of an epic battle over eminent domain.

Will the Remnants of Ida Greet New England?

As you may have noticed, the above average temperatures from early this week have given way to more seasonable temperatures for New England. Highs today will be near 50°F (10°C) with some gusty east winds developing. The winds will result from a departing high pressure centered near Nova Scotia, along with a broad low pressure center located just off the Virginia coast.

Military officials charged Maj. Nadil Malik Hasan on Thursday with 13 counts of premeditated murder, accusing him of a brutal one-man attack here at America’s largest Army post last week and setting in motion what promises to be a historic court-martial proceeding that could end in the death penalty. 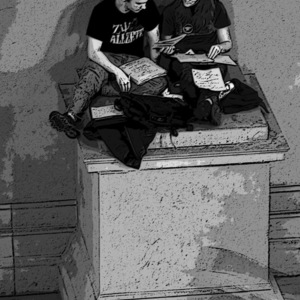 The Empty Plinths of Lobby 7

As one who is particularly fascinated by the synergistic relation between people and architecture (how architecture affects people and how people interpret and affect architecture), I find the plinths in Lobby Seven to be one of the most endearing and defining aspects of MIT. What many may not know is that William Welles Bosworth, the architect of MIT’s main academic buildings, also intended to erect a three-story statue of Minerva in front of Building 10. However, such an enormous idol was vetoed by Richard Maclaurin, President of MIT, during its transition from Boston to Cambridge, and it soon became a running joke between the two (Bosworth was adamant about the Minerva, but President Maclaurin would have none of it). As such, when one enters Killian Court nowadays, he or she is greeted by the overwhelming mass of the buildings themselves, topped by the imposing dome of Barker Library —much more representative symbols of the Institute than a literal and figural (not to mention gargantuan) representation of wisdom.

A Defense of Capitalism

In his November 6 column in <i>The Tech</i>, entitled “Who Does Capitalism Really Work For?,” Alexi Goranov argues that, given the current economic and social state of America, it is clear that there must be an overhaul of the system. Greedy corporations and those in the upper echelon of the economic ladder have stopped at nothing to profit at the expense of America’s working class. The system has rewarded the few while failing to provide for the majority of Americans. Therefore, it is our responsibility to initiate a new, democratic way of doing things, one that puts people before money.

The recently filed will of Jeffry Picower, who granted 50 million dollars to MIT (2001 to 2005) to fund the Picower Institute for Learning and Memory, specifies that much of his remaining assets be placed in a new charitable foundation devoted largely to funding medical research. What will be receiving attention at the MIT Treasurer’s office no doubt is that the will directs that the new foundation in its first year grant MIT an additional 25 million dollars for the Picower Institute for Learning and Memory. It is now known from court filings in the Madoff case that Jeffry Picower received over 7 billion “net” in phony profits from the Madoff Ponzi, and that this constitutes the bulk of his wealth. So I ask:

The MIT Musical Theater Guild opened their <i>Side Show</i> (book and lyrics by Bill Russell, music by Henry Krieger) last weekend, and in keeping with a long-standing sideshow tradition, offered an experience that was different and unforgettable. Of course, the metaphor collapses when you realize that, contrary to being the stuff of nightmares, MTG’s <i>Side Show</i> is not only enjoyable but is one of those rare musicals that elicits drama without resorting to character death (not that there’s anything wrong with that, Mr. Whedon) or <i>deux ex machina</i>. 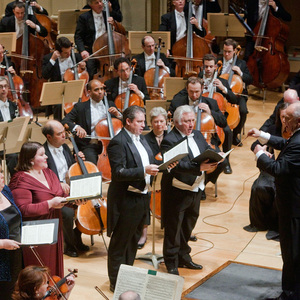 In the final concert of the Boston Symphony Orchestra’s <i>The Complete Symphonies</i> series, celebrated conductor Lorin Maazel led the orchestra to a remarkable performance of Beethoven’s Eighth and Ninth Symphonies. Maestro Maazel, former Music Director of the New York Philharmonic, conducted the orchestra in the last two episodes of the series in place of Maestro Levine.

The Boston Symphony Orchestra regularly makes available concerts to MIT students free of charge under the CollegeCard program which is also subsidized by the MIT Office of Arts. More details are available at <i>http://web.mit.edu/arts/see/freetickets/.</i> 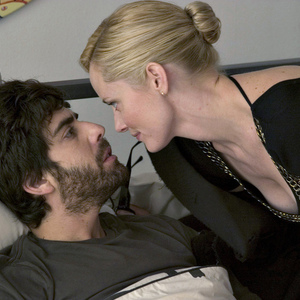 U<i>NTITLED), </i>a new contemporary film by Jonathan Parker, daringly satirizes the sensitive subject of art in modern society. The film, starting from its very title, is odd. It’s evocative like a documentary, humorous like a comedy film, but altogether captivating like a piece of art. Here’s why.

When in Rome Exclusive Screening at MIT

Touchstone pictures will be at MIT next Thursday, November 19 to present an exclusive screening of <i>When In Rome</i>. A romantic comedy slated for release next January, the film features Kristin Bell on a one-of-a-kind journey to Rome. Luck leads to love, but Bell’s character is faced with the pursuits of a handful of zealous suitors. How will she pick <i>the one</i>? The screening will be in 26-100 at 8 p.m. Exclusive passes can be downloaded at <i>www.</i><i>wheninromescreenings.</i><i>com</i>.

CONCERT REVIEW I Am a Rock. I Am An… Islands

Looking a little like I’d imagine a Jedi-Elvis impersonator might, Nick Thorburn, (a.k.a. Nick T, formerly Nick Diamonds) lead singer of Islands and vanguard of the Montreal music scene, took the stage, and, with an aloofness characteristic of his interviews and performances, enchanted Wednesday’s audience.

Making the first appearance in the NCAA Division III Tournament in program history, the MIT field hockey team picked up a hard-fought 2-1 decision over Nichols College on Wednesday night. The Engineers opened up a two-goal lead in the first half and withstood a furious, late rally to advance past the host Bison. Kimberly A. Barker ’13 and Ekavali Mishra ’10 found the scoring column and Keri A. Dixon ’11 had another spectacular performance in net to help the Cardinal and Grey earn its 18th win in this record-breaking campaign. Nichols’ season comes to an end at 18-4.

OCW’s budget saw a $500,000 decrease in the 2009 fiscal year. Plans for increased revenue include a “Course Champions” pilot campaign and continued use of referral links.
Jessica Liu—The Tech 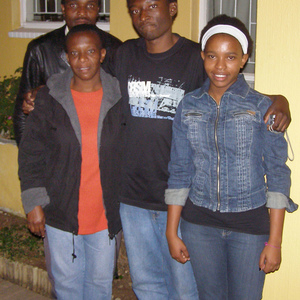 Zwane (second from right) and family, during a visit with his MIT Educational Counselor in South Africa before he left for the U.S. in 2008.
Photo courtesy Belinda E. Schmolke 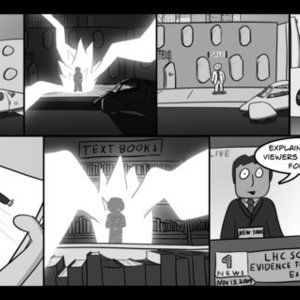 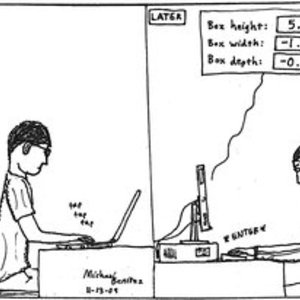 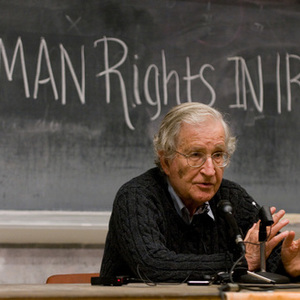 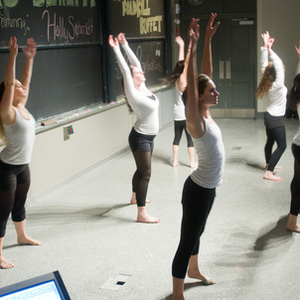 The Dance Organization of Boston College (DOBC) was one of many performing groups at the MIT/Wellesley Toons Concert for a Cure, which took place Saturday night in 10-250. It was the 4th annual Multiple Sclerosis bene...
Corey J. Kubber 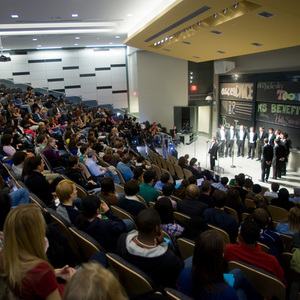 A crowded 10-250 watches as the Harvard Din & Tonics perform at the MIT/Welllesley Toons Concert for a Cure, which took place Saturday night in 10-250. It was the 4th annual Multiple Sclerosis benefit concert hosted b...
Corey J. Kubber 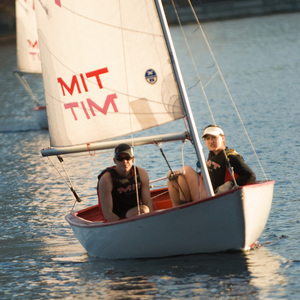 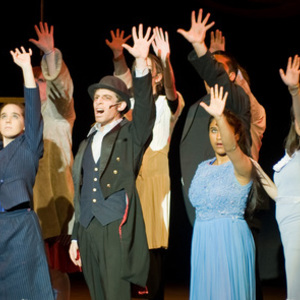 The Boss, performed by Zachary B. Barryte ’13, leads the circus company during the Musical Theater Guild’s production of Side Show in La Sala de Puerto Rico. The show runs tonight and tomorrow evening at 8 p.m.
Elijah Mena 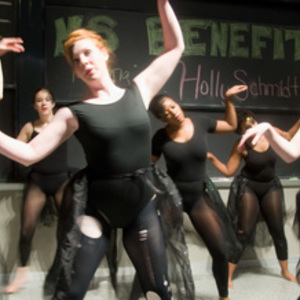 Wellesley College’s AscenDance was one of many performing groups at the MIT/Wellesley Toons Concert for a Cure, which took place Saturday night in 10-250. It was the 4th annual Multiple Sclerosis benefit concert hoste...
Corey J. Kubber 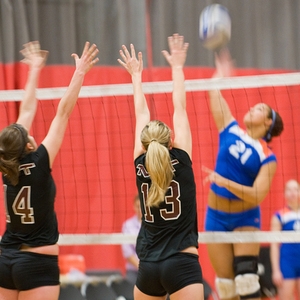 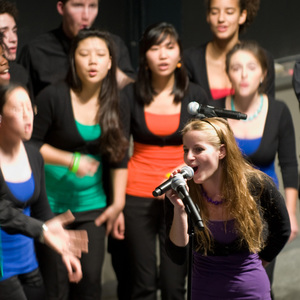