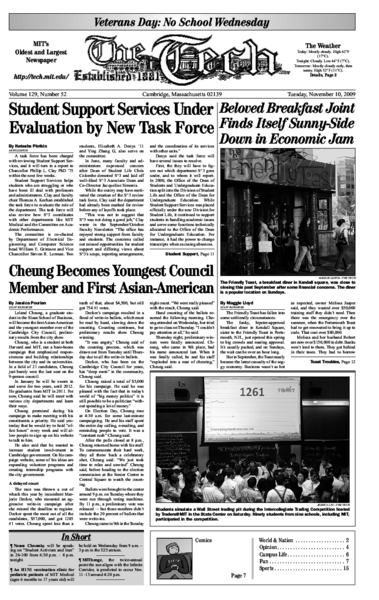 A task force has been charged with reviewing Student Support Services, and it will turn in a report to Chancellor Phillip L. Clay PhD ’75 within the next few weeks. 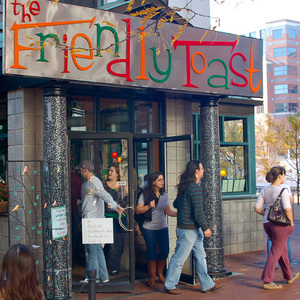 Beloved Breakfast Joint Finds Itself Sunny-Side Down in Economic Jam

The Friendly Toast has fallen into some unfriendly circumstances.

Leland Cheung, a graduate student in the Sloan School of Business, will become the first Asian-American and the youngest member ever of the Cambridge City Council, preliminary results from the city show.

Three American hikers who were arrested in Iran this summer after straying across its border with Iraq have been accused of spying, an Iranian state news agency reported Monday.

As health care legislation moves toward a crucial airing in the Senate, the White House is facing a growing revolt from some Democrats and analysts who say the bills Congress is considering do not fulfill President Barack Obama’s promise to slow the runaway rise in health care spending.

Chancellor Angela Merkel led a gathering of world leaders in Germany’s capital Monday for a celebration of the night 20 years earlier when the Berlin Wall fell.

As Investors Race to Stocks, The Dollar Weakens Further

If the U.S. economy is getting stronger, why is the dollar getting weaker?

Radical Cleric Tied to Shooting at Base in Texas

Intelligence agencies intercepted communications last year and earlier this year between the military psychiatrist accused of shooting to death 13 people at Fort Hood, Texas, and a radical cleric in Yemen known for his incendiary anti-American teachings.

The collapse of the Palestinian Authority, Israel’s negotiating partner, was raised as a possibility on Monday, as several aides to its president, Mahmoud Abbas, said that he intended to resign and forecast that others would follow.

Although this year’s Atlantic hurricane season has been a relatively quiet one, we are reminded in recent days that hurricane season doesn’t end until November 30. After going almost two months without a hurricane due to hostile conditions during the heart of the hurricane season, Hurricane Ida provided the late bloomer punch for this otherwise famished hurricane season. Spawned last Wednesday off the coast of Costa Rica, Ida lashed Nicaragua with heavy rain and waves. Unfortunately, 130 people were killed in El Salvador due to severe flooding there. Ida peaked as a category two storm, which was much stronger than anticipated, as it passed just northeast of Cancun, Mexico into the Gulf of Mexico on Sunday. It is projected to make landfall early today near Mobile, Alabama as a tropical storm. The main impacts will be the heavy rains — possibly up to half a foot (15 cm) — over the southeast as it makes a hard right turn and slows down after moving inland.

To Research or Not to Research?

“We need more research!” This was the rallying call of climate scientist and MIT alum David Keith ’91 at the Geoengineering Symposium held at MIT just over a week ago. This is, of course, the scientist’s traditional response when challenged, but when considering research in geoengineering, the risk is that we may be damned if we do and damned if we don’t.

I wrote an article in the October 20 <i>Tech</i> in which I lambasted our government’s wasteful spending. While much time was spent offering examples of wasted tax dollars, there was little discussion of where I would want my money to go. In addition, what reforms or new programs should be set up to provide more tangible benefits than studying drunk Argentineans? There is a specific area in which the federal government needs to step up, and I hereby propose the Obi-Wan Kenobi Act.

On my way to class this past Wednesday morning, November 4, I was very humbled to see the POW/MIA vigil occurring in Lobby 10. Stopping to take a moment to watch one of the ROTC members march, I felt a great sense of pride that a school with as much hustle and bustle as MIT was able to take a day to stop and remember those who bravely fight for the freedom we enjoy here at MIT and in the United States.

An October 30 article on MIT’s wrestling team incorrectly reported a team member’s name and class year: Glenn Geesman is a member of the Class of 2009, not 2010, and his first name is spelled “Glenn,” not “Glen.”

Football Closes Season With Loss to Endicott; Looks Ahead to Next Year

On their Senior Night, the Endicott College Gulls held the MIT Engineers to 107 yards of total offense after All-American Captain DeRon M. Brown ’10 was knocked out of the game with a concussion after rushing for only three yards on nine carries. The game was won by Endicott, 27-10.

Fencing Opens Season with ‘The Big One

The Men’s and Women’s Varsity Fencing teams had their first tournament of the year, “The Big One” this past weekend hosted by Smith College. The traditional opening meet of the season brought a diverse field of competitors from more than 21 different schools, including several NCAA Division I and II opponents.

The MIT water polo team won a pair of games over the weekend to secure a third-place finish at the Collegiate Water Polo Association Northern Division Championship. The Cardinal and Grey beat the host Crimson, 7-5, in the opening round and followed that up with a win over Iona in the third-place contest on Sunday. Tech’s lone loss was an 8-6 setback at the hands of eventual division champion, Brown.

The MIT Field Hockey Team captured the NEWMAC Championship this weekend, shutting out Mount Holyoke 2-0 in the semifinals and defeating Springfield 4-2 in the final. With the wins, the Engineers improved their season record to 17-4 — a program record — and earned the second conference title in program history.

The MIT Women’s Soccer Team won its first-ever NEWMAC Championship — and its first conference title since 1989 — this weekend, defeating Wheaton College in the semifinal and defending champions Springfield College in the final. The Engineers won both games with a score of 1-0.

This week’s column covers the upgrade of Athena clusters to Debathena from Athena 9.4, and details some of the main new features that are now available.

The idea of the “frivolous conversation about everyday subjects”, experienced by all and popularized by sitcoms, remains one of the few ways in which we can connect with new acquaintances and sometimes complete strangers without being invasive or sketchy. Just yesterday, I briefly discussed Cheetos and dental hygiene with the lady next to me in line at the pizza parlor. Several months back, it was carbonated drinks with Ingrid the Shaw’s Cashier. Last week, the <i>pièce de résistance</i> was an interchange at length over bagels and cake on the subject of breakfast food, with cereal (specifically cold and served with milk) as the centerpiece. 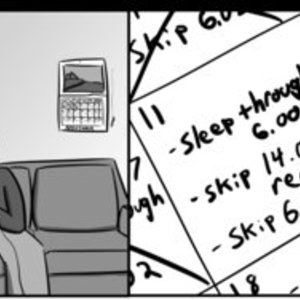 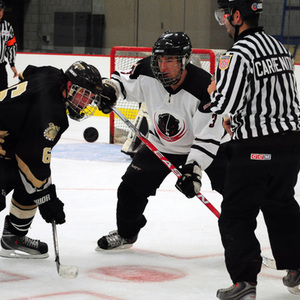 Gabriel V. Blanchet ’13 faces off against John May of Bryant University in Saturday’s ice hockey game. Even though Blanchet scored two goals, the Engineers lost 8-7 against their conference rival.
Aaron thom

The Friendly Toast, a breakfast diner in Kendall square, was close to closing this past September after some financial concerns. The diner is a popular location on Sundays.
Maggie Lloyd—The Tech 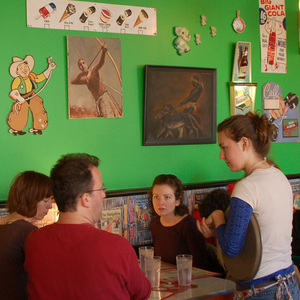 Diners waited over an hour to have lunch last Sunday at The Friendly Toast in Kendall Sqaure.
Maggie Lloyd—The Tech 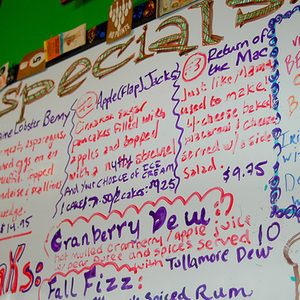 The Friendly Toast promotes its specials on a whiteboard last Sunday around lunch time. Customers praise the diner for the quality of its big pancakes and coffee.
Maggie Lloyd—The Tech 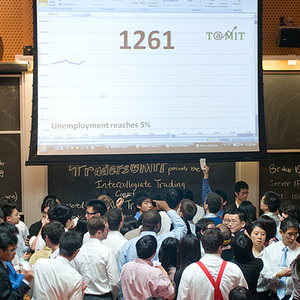 Students simulate a Wall Street trading pit during the Intercollegiate Trading Competition hosted by Traders@MIT in the Stata Center on Saturday. Ninety students from nine schools, including MIT, participated in the c...
JEssica liu—The Tech 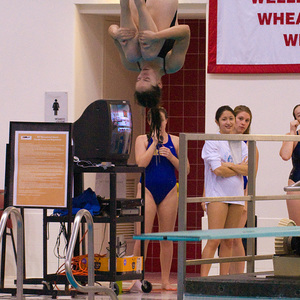 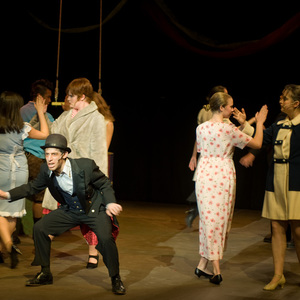 The boss, played by Zachary B. Barryte ’13, leads the opening scene during the Musical Theatre Guild’s production of Side Show in La Sala de Puerto Rico. The show will play three nights this weekend, Nov. 12–14, at 8 ...
Elijah Mena
All Photos From Issue