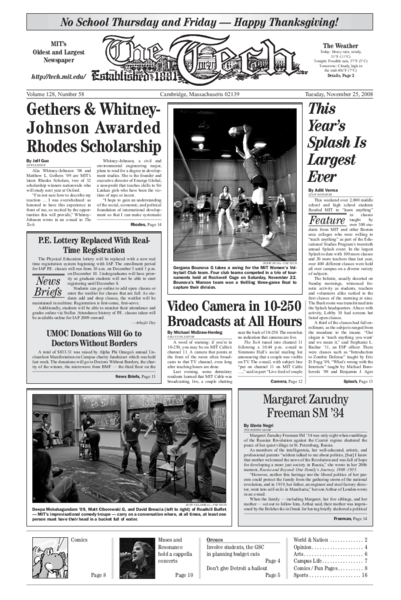 This Year’s Splash Is Largest Ever

This weekend over 2,000 middle school and high school students flooded MIT to “learn anything” in classes taught by over 300 students from MIT and other Boston area colleges who were willing to “teach anything” as part of the Educational Studies Program’s twentieth annual Splash event. In the largest Splash to date with 100 more classes and 20 more teachers than last year, over 400 different classes were held all over campus on a diverse variety of subjects.

In the week since <i>The Chronicle of Higher Education</i> published its annual survey of university presidents’ pay — a week in which the nation’s economic troubles worsened — several of the highest-paid presidents said that they would give back part of their pay or forgo their raises. 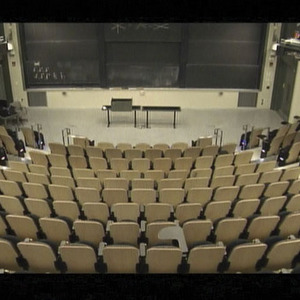 Video Camera in 10-250 Broadcasts at All Hours

A word of warning: if you’re in 10-250, you may be on MIT Cable’s channel 11. A camera that points at the front of the room often broadcasts to that TV channel, even long after teaching hours are done.

With his appointment Monday to lead the National Economic Council, the brainy but abrasive Lawrence H. Summers ’75 is set to become a key ideas man for President-elect Barack Obama as he labors to keep the economic crisis from spiraling out of control.

Given the current economic downturn, admissions officers at Wesleyan University thought there might be a decline in early-decision applications this year. But when the deadline passed last weekend, they found that the number had risen 40 percent.

Margaret Zarudny Freeman SM ’34 was only eight when rumblings of the Russian Revolution against the Czarist regime shattered the peace of her quiet village in St. Petersburg, Russia.

Alia Whitney-Johnson ’08 and Matthew L. Gethers ’09 are MIT’s latest Rhodes Scholars, two of 32 scholarship winners nationwide who will study next year at Oxford.

The Physical Education lottery will be replaced with a new real time registration system beginning with IAP. The enrollment period for IAP P.E. classes will run from 10 a.m. on December 3 until 1 p.m. on December 10. Undergraduates will have priority as graduate students will not be able to start registering until December 8.

Another Financial Crisis, Another Govt. Guarantee

Guarantees that could not be honored thrust the world financial system into its worst crisis since the Great Depression. Will a guarantee by the U.S. government finally restore confidence in the American financial system?

For the last year, Timothy F. Geithner has been at the very heart of dealing with the financial crisis, the junior partner with Treasury Secretary Henry M. Paulson Jr. and Ben S. Bernanke, chairman of the Federal Reserve. Together, they scrambled to save Bear Stearns, American International Group and Citigroup, while letting Lehman Brothers fail.

Bush Issues 14 Pardons, But None to Notables

President Bush granted 14 pardons and commuted two prison sentences on Monday, but the benefactors included none of the big names who had become the topic of speculation as Bush leaves office.

President-elect Barack Obama sought to seize the reins of the economic crisis on Monday as he and his new economic team worked closely with President Bush to inject confidence into the trembling financial markets, which rallied throughout the day and erased nearly all of last week’s losses.

Just as the world seemed poised to combat global warming more aggressively, the worldwide economic slump and plunging prices of coal and oil are upending plans to wean businesses and consumers from fossil fuel.

From the hardened slums of this city to some of Venezuela’s most populous and economically important states, many of President Hugo Chavez’s supporters deserted him in regional elections, showing it is possible to challenge him in areas where he was once thought invincible.

The travel industry is bracing for a painful holiday season as people scale back their discretionary spending. But that is good news for anyone who has yet to book a winter getaway, with hotels, airlines and cruise operators introducing last-minute deals to entice vacationers.

Below are the Wednesday forecasts for your holiday destinations:

The letter sent to the MIT community by President Hockfield and Provost Reif on Monday, November 17 announced a 5 percent budget cut for Fiscal year 2010 and a 10–15 percent cut over the next two to three years. The letter raised sobering realities concerning the state of MIT finances. It argued the need to plan conservatively in the face of potential decreases in endowment returns, federal research grants, and donor giving, and a potential increase in demonstrated financial need by families of undergraduates receiving aid.

Headed for a Breakdown

“Until they show us the plan, we cannot show them the money.”

Power to the Pirates

The Somali pirates have really outdone themselves this time. Last Saturday night, while you were out late partying, these guys were hard at work hijacking a supertanker carrying $100 million worth of crude oil. I congratulate them on their success! I know I can’t be the only Tech student out there who reacts instinctively with cheer every time I hear that pirates have captured another vessel stacked with Russian tanks or filled with Saudi crude oil. 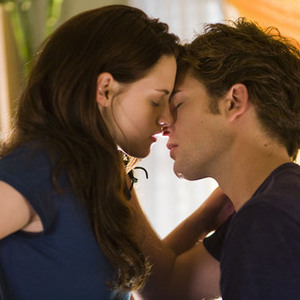 MOVIE REVIEW ★★ Eye Candy and Nothing Else

When my friends and I made our way to the “Twilight” premiere, we decided that we were going to act like teenyboppers and blend in with the hordes of high-schoolers and possibly middle-schoolers that we predicted would be present. To our great surprise, half of the audience comprised of college students who were unabashedly hardcore fans. But regardless of age, the majority of the audience at the “Twilight” premiere was female. I estimated a total of 5 percent y-chromosomes, loosely consisting of fathers picking up their daughters, boyfriends of avid fans, and the occasional feminine-looking hipster. 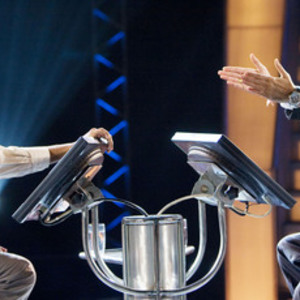 I was a little skeptical walking into a movie centered on the premise of finding a lost love. In the interest of full disclosure, I’m not a fan of the romance genre. I decided to go into “Slumdog Millionaire” with an open mind and was pleasantly surprised.

After only two weeks of training since their victorious home tournament, the MIT Sport Taekwondo Club traveled to Cornell University on Sunday, Nov. 9 to compete in the second Ivy Northeast Collegiate Taekwondo League (INCTL) tournament of the season. Despite the short resting and training period, the team, coached by head instructor Dan Chuang and led by captains Corinna Hui ’09 and Christopher J. Han ’09, once again upheld their reputation as a formidable opponent by taking second place at the tournament and remaining in first place overall in the League.

Devin M. Lewis ’10 scored four goals, including a pair of penalty shots, to lead the MIT men’s water polo team to a 10-9 win over Iona College in the seventh place game at the 2008 Eastern Championship hosted by the United States Naval Academy. The Engineers end their season at 10-16 overall.

Competing among 31 of the top squads in the nation, the MIT women’s cross country team secured a 10th place finish at the Division III NCAA Championship in Hanover, Ind. on Saturday. It was the first appearance at the National Championship meet in MIT program history and the Engineers more than held their own in the highly competitive field.

Holidays are about family — and sometimes, that includes the significant other’s family. My parents have not liked any of my boyfriends, and I’ve told every boyfriend to be himself. That was my mistake. It’s not that he can’t be himself — it’s just that he should be the professional version. I might be able to forgive drinking out of the milk carton; however, my dad will instantly go into the bacterial colonization of the defenseless milk. (I should really show him the carton in Pecker.)

When my mother was in eighth grade, her St. Michaels Catholic School class went on a trip to Bear Mountain in upstate New York. Two kids — let’s call them Patty and John — disappeared into the woods for an afternoon of good Catholic fun. At the end of the day, the whole class had to wait on the bus while the nuns went searching for the sinners. 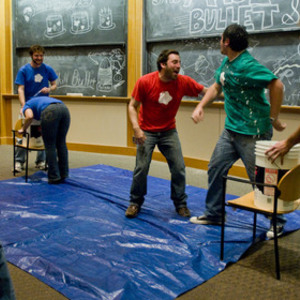 Deepa Mokshagundam ’09, Matt Ciborowski G, and David Brescia (left to right) of Roadkill Buffet — MIT’s improvisational comedy troupe — carry on a conversation where, at all times, at least one person must have their ...
Seth Villarreal­—The Tech 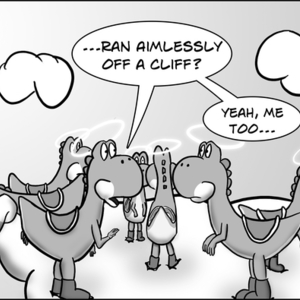 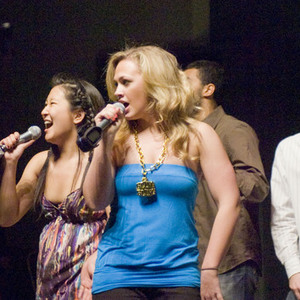 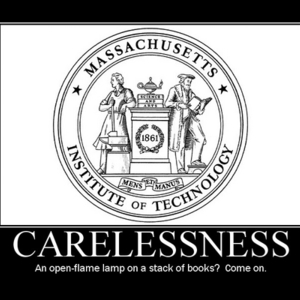 Kristen Stewart plays Bella Swan, a teenaged girl who falls in love with the vampire Edward Cullen (played by Robert Pattison), in the film “Twilight,” an adaptation of the best-selling book of the same name.
Deana Newcomb—Summit Entertainment

Jamal Malik (left), played by Dev Patel, makes his way from the slums of Mumbai to the final question of India’s Who Wants to Be a Millionaire?, hosted by Prem Kumar (right, Anil Kapoor), in the film “Slumdog Milliona...
Ishika Mohan—Fox Searchlight Pictures 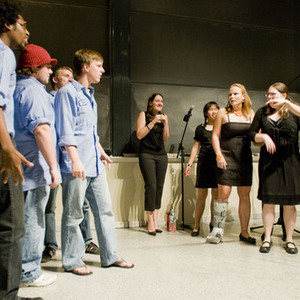 Members of the Muses and St. Louis University’s Bare Naked Statues face off in a beatboxing battle during the Muses’ fall concert on Friday night.
Monica Kahn—The Tech 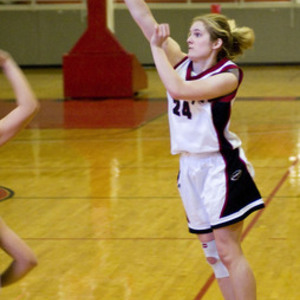 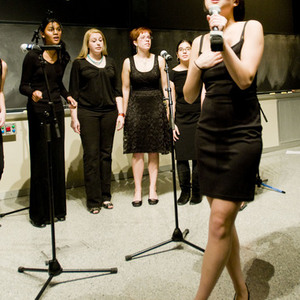 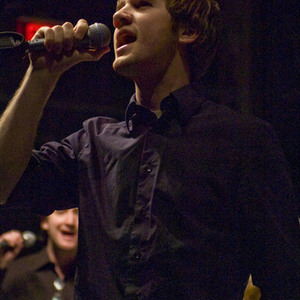 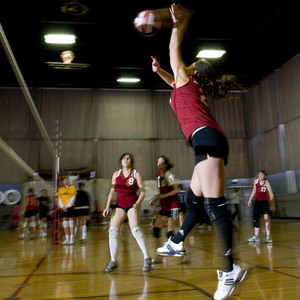 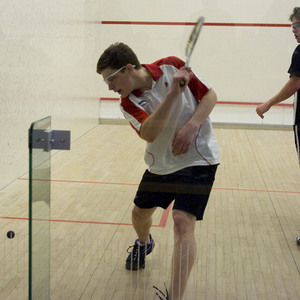 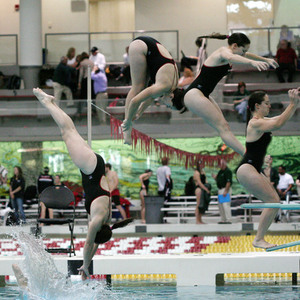