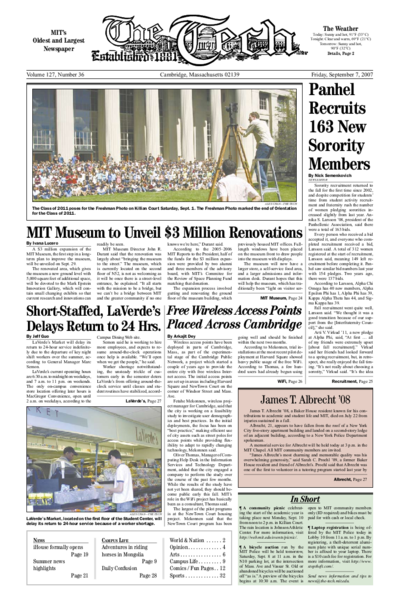 Five burn injuries from a boat fire on the Charles River Thursday appear to have been caused by sodium, said Jake Wark, spokesperson for the Suffolk County District Attorney’s Office. Local media sources reported that the sodium may have come from Sodium Drop, an MIT tradition in which sodium is thrown into the Charles River so that students can watch its violent reaction with the water. 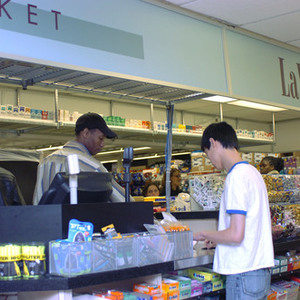 LaVerde’s Market will delay its return to 24-hour service indefinitely due to the departure of key night shift workers over the summer, according to General Manager Marc Semon.

Wireless access points have been deployed in parts of Cambridge, Mass., as part of the experimental stage of the Cambridge Public Network, a project which started a couple of years ago to provide the entire city with free wireless Internet access. The initial access points are set up in areas including Harvard Square and NewTown Court on the corner of Windsor Street and Mass. Ave.

A $3 million expansion of the MIT Museum, the first step in a long-term plan to improve the museum, will be unveiled on Sept. 29.

Sorority recruitment returned to the fall for the first time since 2002, and despite competition for students’ time from student activity recruitment and fraternity rush the number of women pledging sororities increased slightly from last year. Annika S. Larsson ’08, president of the Panhellenic Association, said there were a total of 163 bids.

<b>The body of missing student Ryan M. Davis ’10</b> was found in Skinner State Park, a 390-acre area on the top of Mount Holyoke, on May 26. He was 20. Davis had been missing since March 31 and was last seen on the Mt. Holyoke College campus. Davis withdrew from classes at MIT on March 13, one day after an incident at East Campus, in which police responded to the discovery of an unknown device which was releasing chlorine gas in East Campus’ basement hobby shop. He was questioned by campus police and consented to a search of his room, during which the police discovered an assortment of drugs and chemicals. Davis was arrested on Thursday, March 15, charged with two misdemeanor counts of possession of a class B controlled substance, one misdemeanor count of disorderly conduct, and one felony count of possession of a class B controlled substance with intent to distribute. 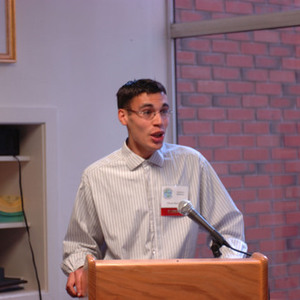 A ribbon cutting ceremony was held on Tuesday as part of the formal opening of iHouse, the new living and leaning community in New House 1.

James T. Albrecht ’08, a Baker House resident known for his contributions to academic and student life and MIT, died on July 22 from injuries sustained in a fall.

An 18-year-old student died Wednesday after an early morning fight with another woman who had been her roommate, in their dormitory room at the University of Arizona in Tucson, the police said.

Boston researchers are about to begin a bold experiment that, if it works, could help solve the organ shortage and provide other replacement parts for worn-out humans: They will try to grow heart valves, and parts of a pancreas and a tooth, from scratch in the lab.

Petraeus, Viewing Gains as Fragile, Is Wary of Pullbacks

Gen. David H. Petraeus, the top U.S. commander in Iraq, has told President Bush that he wants to maintain heightened troop levels in Iraq well into next year to reduce the risk of military setbacks, but could accept the pullback of an initial brigade beginning in January, according to senior administration and military officials.

Apple unexpectedly cut the price of its iPhone on Wednesday, claiming that it was seeking to broaden the market for the popular but pricey phone for the Christmas season.

Germany Building a Case Against Others Implicated in Terrorist Plot

German investigators were trying to build a case on Thursday against a handful of suspects beyond the three arrested in connection with a foiled terrorist attack by Islamic militants, and German officials prepared to debate whether security services should be given wider surveillance powers.

As you transition from a summer of frolicking to a fall of problem sets or an orientation week of free food to a first week of sudden starvation, the weather seems to be the only thing somewhat constant this first week of the semester. September is considered to be the nicest month of the year, but it is not without its variety. Autumn’s chill can come barreling out of Canada and hurricanes can approach from the Atlantic, though none of that is in the cards the next few days.

Eleven local public officials, including two members of the state Assembly, were charged Thursday with taking thousands of dollars in bribes in exchange for promising municipal business to undercover officers posing as insurance brokers, in the latest federal probe into New Jersey’s rampant political corruption. 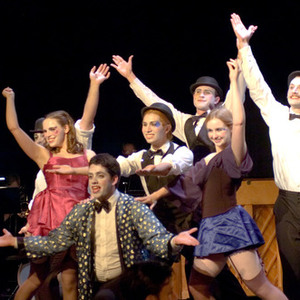 THEATEr REVIEW ‘Cabaret’ Bittersweet All Around

C<i>abaret</i>, a historical musical about the risqué culture of late 1920s Berlin, explores the unique relationship between a cabaret singer, Sally Bowles, and an American writer, Clifford Bradshaw. The musical ends where many stories begin — with the Nazis’ rise to power — and shows the transformation of a once eccentric and welcoming cabaret, the Kit Kat Club, into a depressing Nazi establishment.

Let’s Get It On

I started dating my long-distance boyfriend of a year partially because of his sense of humor, partially because of our similar tastes, partially because I thought he was cute, but really because he mailed me a completely excellent mix CD. Thirteen tracks counting in at around forty-four minutes wooed me so thoroughly I’ve spent hundreds of dollars over the past twelve months taking the Fung Wah back-and-forth from New York to visit him.

Boston and Cambridge are two pretty exciting cities, and both offer diverse art scenes that range from movies to music to museums. But sometimes, being at MIT, we don’t know where to look when we want a little culture or entertainment. So I have decided to write up this little guide listing places where you can see some of the great art that these two cities on the Charles have to offer.

This was supposed to be the year. 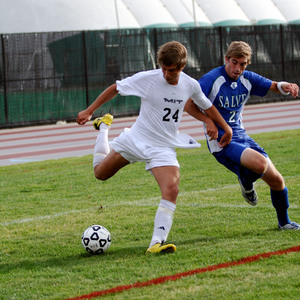 Christian W. Therkelsen ’11 made his intercollegiate debut memorable by scoring the game-winning goal in the 57th minute as MIT opened the 2007 campaign with a 2-0 victory over visiting Salve Regina University on Tuesday afternoon at Steinbrenner Stadium. The game marked the eighth consecutive year in which the Engineers have begun the season with a victory.

A Frosh Out of Water

There’s something overwhelming about arriving on the MIT campus that makes me sound both apathetic and verbally primitive. “Why did you show up a week early without an FPOP or a sport to go to?” “Just ’cuz,” I said. “Why did you choose that major?” “No reason,” I responded. “What’d you have to suck the helium out of all those picnic balloons for, and why is your face turning blue??” “… I dunno,” came the reply, with me sounding and looking not unlike a Smurf shortly before losing consciousness.

The first bright yellow and orange glimpses of autumn peeked out from the underbrush between the trunks of the pine forest outside. As the heaters pushed the morning chill from the car, we made our way over a pass on a bumpy dirt road. For a few moments, it seemed as if I was home again; the scene could have occurred on any of the frosty fall mornings of my childhood spent growing up in the Yukon. But as we descended around a corner, the distinct cylindrical profile of a nomadic Mongolian tent — called a <i>ger</i> in those parts — came into view, and the illusion quickly vanished.

It was Thursday. I was about a week into my time at MIT, and sure enough, on the phone to my buddy, I found myself screaming, “IHTFP already!” Well, not the acronym. You get the idea.

Zachary M. Addison ’11 discusses why he chose to live in iHouse during the residence’s opening ceremony.
Aaron Sampson—The TEch 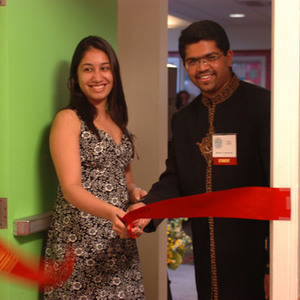 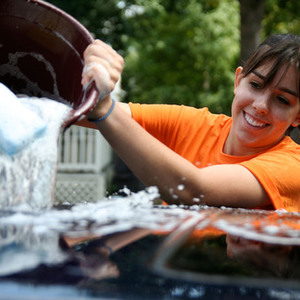 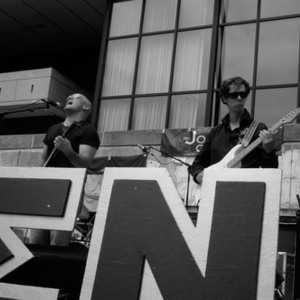 LaVerde’s Market, located on the first floor of the Student Center, will delay its return to 24-hour service because of a worker shortage.
Alex Chan—The Tech 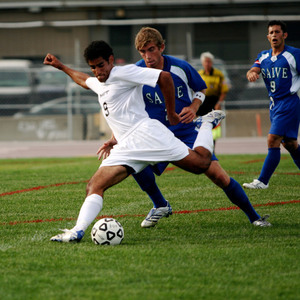 Andrew M. Bishara ’09 (pictured) was a key shooter in the game, taking over a third of the team’s 22 shots.
Alex Chan—The Tech 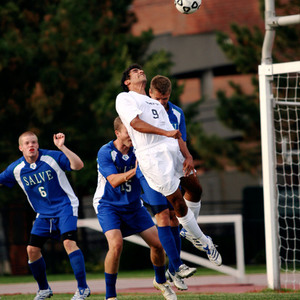 Captain Andrew M. Bishara ’09 scores the second goal for MIT, planting a header in the back of the net.
Alex Chan—The TEch 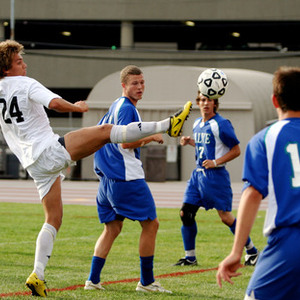 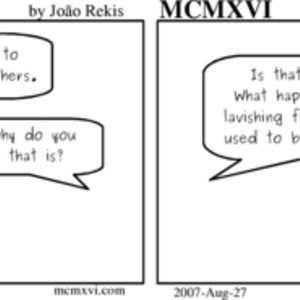 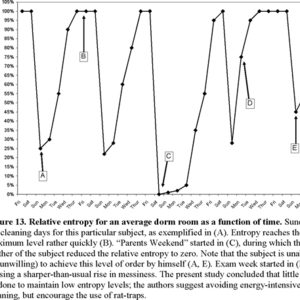 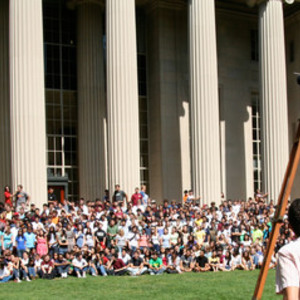 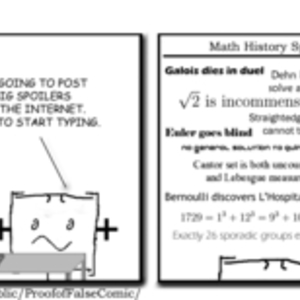 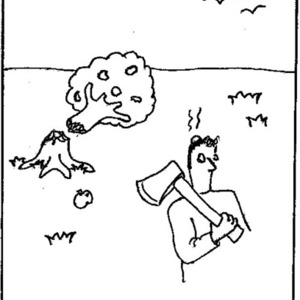 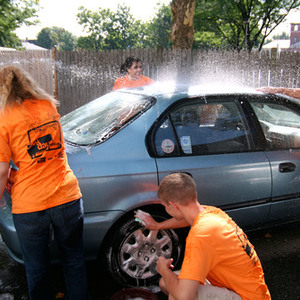 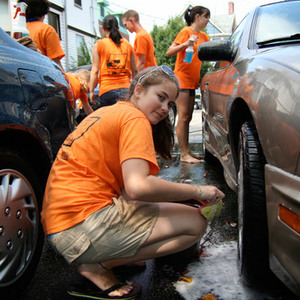 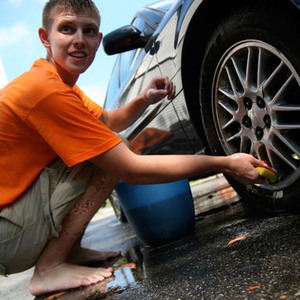 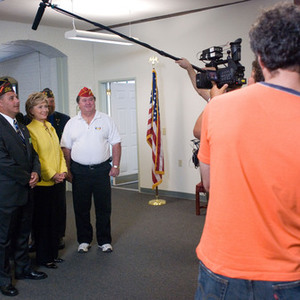 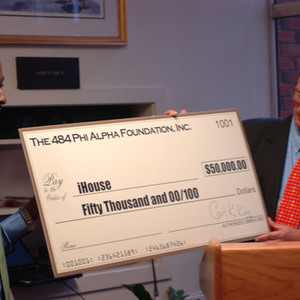 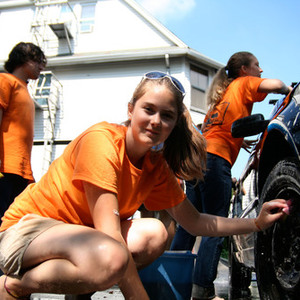