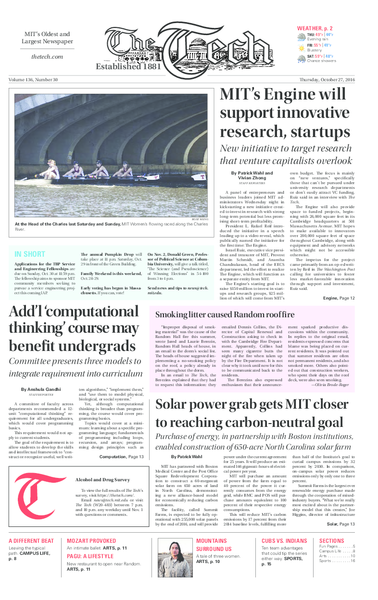 “Improper disposal of smoking material” was the cause of the Random Hall fire this summer, wrote Jared and Laurie Berezin, Random Hall heads of house, in an email to the dorm’s social list. The heads of house suggested implementing a no-smoking policy on the roof, a policy already in place throughout the dorm.

An Engine for innovation

A committee of faculty across departments recommended a 12-unit “computational thinking” requirement for all undergraduates, which would cover programming basics.

Applications for the TBP Service and Engineering Fellowships are due on Sunday, Oct. 30 at 11:59 p.m. The fellowship aims to sponsor MIT community members seeking to pursue a service engineering project this coming IAP.

Weekend will be warmer, windy, and wet

The best chance for rain will come tonight, as the first of two low pressure systems passes over New England from the west.

40 percent of MIT's power will come from solar

In Sanctuary Theatre, a religious setting for an intimate ballet

In the second act, to Beethoven's Cello Sonata No. 2 in G Minor, dancer Spencer Doru Keith stood out as the most talented and athletic. He bounded airily across the stage, and his leaps attained impressive height and ended in light, graceful landings.

The restaurant will capture a wide variety of experiences: it will have a coffee bar with a delectable selection of pastries throughout the day; it will offer lunch; and in the evening, Tracy’s experience in fine-dining will provide the ultimate experience, whether you’re ordering drinks, pinchos, or dinner.

Paper Lanterns: an awe-inspiring tale of compassion across cultures

Among the twelve victims, Paper Lanterns centers around Normand Brissette and Ralph Neal, two American POW victims, including interviews with members of their families, who shared their gratitude to Mori for his compassion and dedication. 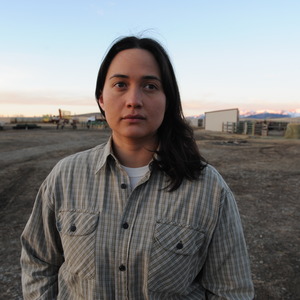 The mountains surround us 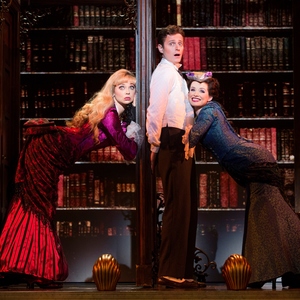 Love and murder adds up to a night of laughter

Even though the show packed in a fair amount of murder, the bloodshed only contributed to the musical’s hilariously over-the-top story set in Edwardian England.

Field hockey (11-3, 6-1 in conference) has played lights out for the most past this season as it sits a solitary game back of conference-leading Babson College.

World Series 2016: why each team could win

After six months of regular and postseason play, the 2016 World Series will see two teams competing, neither of which have experienced a championship in a very long time. The Chicago Cubs will try to break their 108-year curse, and the Cleveland Indians will try to break a curse of their own by becoming the latest city to win two sports championships in the same year (alongside LeBron James’ Cavaliers).

Marching to a different beat

My genes are over 99 percent identical to every other Homo Sapiens. I live in a progressive meditation community in Fairfield, Iowa, that is rich in eastern philosophy. 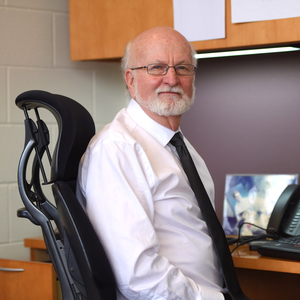 Although I was born in Louisiana, I grew up mostly in Texas. When I was growing up, my father was a “roughneck” in the West Texas oilfields. My dad only finished up to the 7th grade. 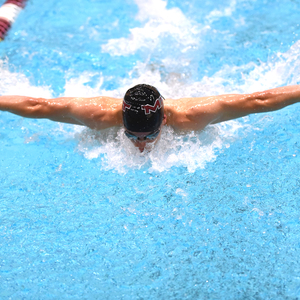 A swimmer completes a length of butterfly in the Alumni Meet last Saturday.
Ping Xu - The Tech 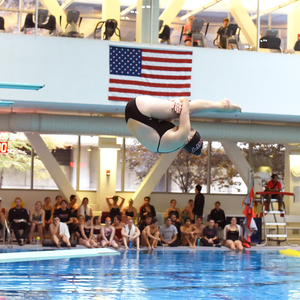 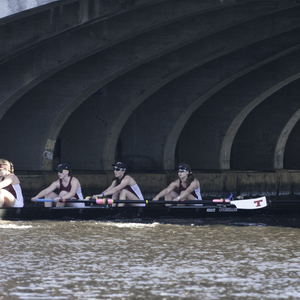 At the Head of the Charles last Saturday and Sunday, MIT Women's Rowing raced along the Charles River.
Rose Wang

Left to right, Kristen Beth Williams as Sibella Hallward, Kevin Massey as Monty Navarro and Adrienne Eller as Phoebe D'Ysquith in a scene from "A Gentleman's Guide to Love & Murder."
Joan Marcus courtesy of National Touring Company
All Photos From Issue