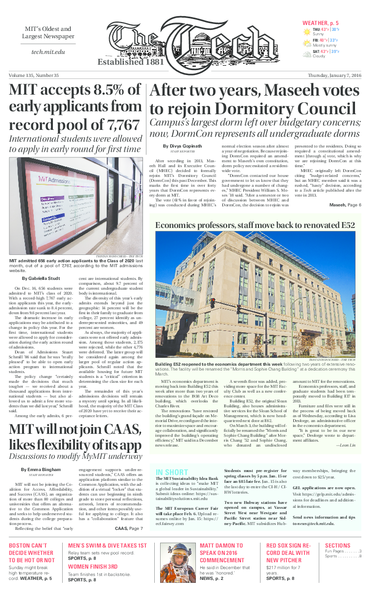 After a record-shattering month of December, the first burst of winter cold has hit the Institute. Ocean-effect snow showers on Monday were followed by Tuesday morning temperatures at Logan Airport plunging to 8°F (-13°C), while a steady northwesterly wind made it feel like -8°F (-22°C). Here on campus, the weather station on the roof of the Green Building recorded a low temperature of 6.9°F (-13.9°C). These temperatures were in stark contrast to the last month of 2015, in which the average high was 52°F (11°C), it was 69°F (21°C) on Christmas Eve, and the temperature only dipped below the freezing mark on four occasions. On average, the month of December was 10.6°F (5.9 K) warmer than average, and 4.3°F (2.4 K) warmer than the next-warmest December on record.

MIT’s economics department is moving back into Building E52 this week after more than two years of renovations to the 1938 Art Deco building, which overlooks the Charles River.

After seceding in 2013, Maseeh Hall and its Executive Council (MHEC) decided to formally rejoin MIT’s Dormitory Council (DormCon) this past December. This marks the first time in over forty years that DormCon represents every dorm at MIT.

Actor and filmmaker Matt Damon will be the commencement speaker for the Class of 2016, MIT announced Dec. 10.

MIT will not join CAAS, likes flexibility of its app

MIT will not be joining the Coalition for Access, Affordability, and Success (CAAS), an organization of more than 80 colleges and universities that offers an alternative to the Common Application and seeks to help underserved students during the college preparation process.

The MIT women’s swimming and diving team, ranked No. 8 in the latest College Swimming Coaches Association of America (CSCAA), finished third among nine teams at its own Winter Invitational with 875 points. The Engineers earned 16 NCAA “B” cuts over the three-day event.

Following back-to-back seasons of last-place finishes in the American League (AL) East, the Red Sox splashed the cash early in the offseason, signing free agent David Price to a record-breaking 7-year, $217 million deal. This deal makes the left-handed ace the highest paid pitcher in the history of major league baseball and the first pitcher with a ‘one million dollar per start’ price tag.

The MIT men’s swimming and diving team, ranked No. 8 in the latest College Swimming Coaches Association of America (CSCAA), finished in front of five teams to win its own Winter Invitational with 1,624.5 points. The Engineers earned 38 NCAA “B” cuts in total at the meet.

The MIT sailing team, ranked No. 14 in the latest Coed College World Sailing poll, placed 14th overall at the 2016 Rose Bowl Regatta hosted by the University of Southern California over the weekend. 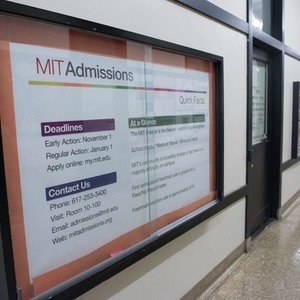 MIT admitted 656 early action applicants to the Class of 2020 last month, out of a pool of 7,767, according to the MIT admissions website.
Tristan Honscheid—The Tech 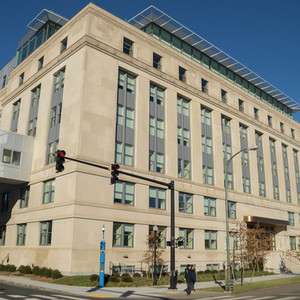 Building E52 reopened to the economics department this week following two years of extensive renovations. The facility will be renamed the “Morris and Sophie Chang Building” at a dedication ceremony this March.
Tristan Honscheid—The Tech
All Photos From Issue