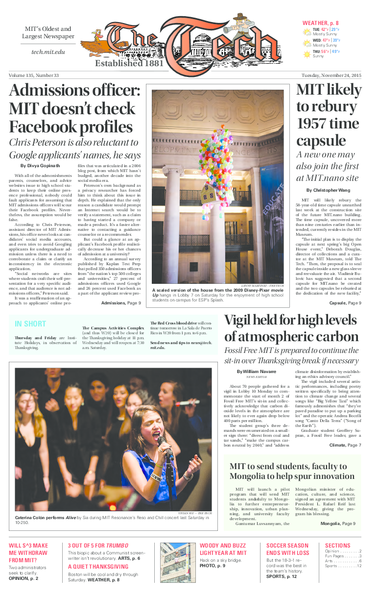 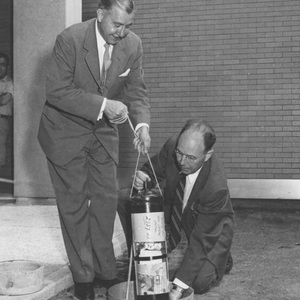 About 70 people gathered for a vigil in Lobby 10 Monday to commemorate the start of month 2 of Fossil Free MIT’s sit-in and collectively acknowledge that carbon dioxide levels in the atmosphere are not likely to ever again drop below 400 parts per million.

With all of the admonishments parents, counselors, and advice websites issue to high school students to keep their online presence professional, nobody could fault applicants for assuming that MIT admissions officers will scour their Facebook profiles. Nevertheless, the assumption would be false.

Last Thursday’s article about the Undergraduate Association’s proposed increase to the student life fee incorrectly stated that at $1,200 per student group per year, $349,000 is needed for the current student groups, additional student-oriented activities, and UA internal operations. In fact, the sum of $349,000 does not include UA internal operations. Also, the article said the student life fee had previously been raised by the Graduate Student Council, which is not confirmed. The article further said that recent UA resignations were due to issues related to student group funding, citing the UA president, who actually only said the resignations were partly due to money issues.

MIT will launch a pilot program that will send MIT students and faculty to Mongolia to further entrepreneurship, innovation, urban planning, and university faculty development.

A quiet Thanksgiving holiday in store

A large high pressure system will continue to creep up the Carolina coast today, keeping skies clear and sunny in Boston. This high will keep weather cool and dry through Saturday, when an approaching upper level disturbance will bring a chance of rain to the area.

Thursday and Friday are Institute Holidays, in observation of Thanksgiving.

Chancellor Cynthia Barnhart has charged organizations we lead, namely the Committee on Academic Performance (CAP) and the Office of the Dean for Undergraduate Education (DUE), with reviewing the undergraduate withdrawal and readmission policies at MIT. We are writing to update the community on our progress and to solicit input to our review.

It seems more than a little fitting that Jay Roach’s new biopic, Trumbo, is classified as a ‘Drama’ for the forthcoming Golden Globes in spite of its studio’s preference for it to be considered in the less competitive Comedy category. This is fitting not only since Trumbo is a movie that doesn’t quite know what it wants to be, but also because it betrays the navel-gazing, self-referential tendencies of Hollywood that the movie initially seeks to satirize but ultimately falls victim to itself.

The MIT men’s soccer team, ranked No. 18 in the latest National Soccer Coaches Association of America (NSCAA) poll, saw their season come to a close with a 2-0 loss to No. 8 SUNY Oneonta in the third round of the NCAA Tournament.

Men’s basketball begins its season on a winning note

On Tuesday, Nov. 17, MIT’s men’s basketball team had its first home game of the season, hosting Bridgewater State University. The Engineers appeared to be the better team that night, pulling away early in the second half and ending with a 64-47 win. Great defensive rotations and superior ball movement helped the Engineers outscore Bridgewater. Justin Pedley ’16 led the scoring for MIT with 29 points as Tim Batula ’17 chipped in with 10 rebounds and 13 points. 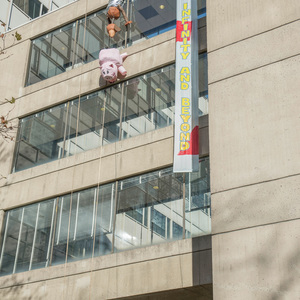 A hack was on display over the weekend on the sky bridge between buildings 56 and 18, depicting Pixar characters Woody, Buzz Lightyear, Ham, and Slinky from Toy Story.
Skyler Adams 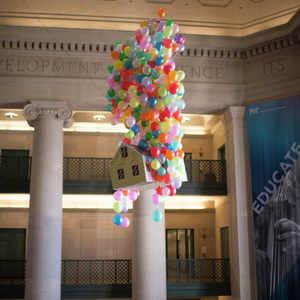 A scaled version of the house from the 2009 Disney-Pixar movie Up hangs in Lobby 7 on Saturday for the enjoyment of high school students on campus for ESP’s Splash.
lenny Martinez—The Tech 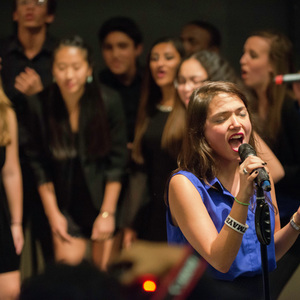 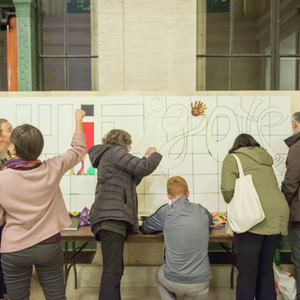 Fossil Free MIT organized a vigil on Monday marking the increase of atmospheric carbon dioxide to over 400 parts per million.
Skyler Adams
All Photos From Issue