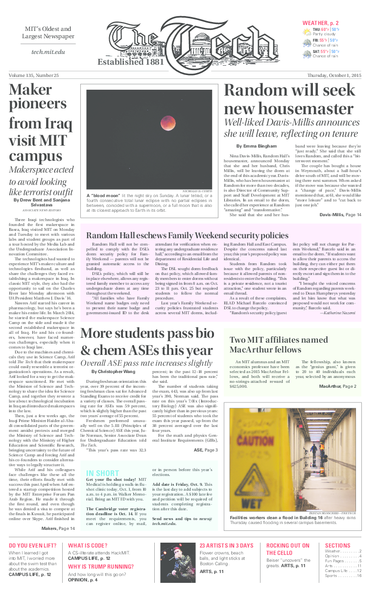 Nina Davis-Millis, Random Hall’s housemaster, announced Monday that she and her husband, Chris Millis, will be leaving the dorm at the end of this academic year. Davis-Millis, who has been housemaster at Random for more than two decades, is also Director of Community Support and Staff Development at MIT Libraries. In an email to the dorm, she called her experience at Random “amazing” and “transformative.”

Hurricane Joaquin developing but not likely to affect MA this weekend

Mild temperatures and a chance of rain will be the norm through the end of the weekend. It will be noticeably cooler than the beginning of the week was, with rain likely at some point over the weekend.

An MIT alumnus and an MIT economics professor have been selected as 2015 MacArthur Fellows, and both will receive a no-strings-attached reward of $625,000.

During freshman orientation this year, over 39 percent of the incoming freshman class sat for Advanced Standing Exams to receive credit for a variety of classes. The overall passing rate for ASEs was 59 percent, which is slightly higher than the past two years’ average of 55 percent.

Random Hall will not be compelled to comply with the DSL’s dorm security policy for Family Weekend — parents will not be granted automatic access to the building.

Three Iraqi technologists who founded the first makerspace in Basra, Iraq visited MIT on Monday and Tuesday to meet with various labs and student groups as part of a tour hosted by the Media Lab and the Undergraduate Association Innovation Committee.

Get your flu shot today! MIT Medical is holding a walk-in flu-shot clinic today, Oct. 1, from 10 a.m. to 4 p.m. in Walker Memorial. Bring an MIT ID with you.

Before coming to MIT as a postdoc in 2013, news of student suicides hadn’t affected me as they do now. I went to large schools: UMass-Amherst for undergrad and The University of Texas at Austin for my PhD. I only recall hearing news of a suicide about once a year, but the rate here feels painfully higher. Following last week’s report of an MIT graduate student’s death, I felt compelled to get involved and began to search for organized efforts within the MIT community. I have to say, what I found (or, rather, what I did not find) shocked me. Despite several articles in which MIT acknowledged the problem of suicides and appeared to commit to addressing the issue, even citing resources, nowhere could I find a salient lifeline for students in crisis at MIT.

The jury is still out on the question, and they’re likely to be out for a while longer. Despite the fact that Trump has been the Republican frontrunner for months now, some people still can’t wrap their minds around the idea that the real-estate mogul and TV personality has his eye on the Oval Office. The issue as it stands today boils down to this: Is Donald Trump a real presidential candidate with a vision, or is this ultimately a PR stunt?

Last Friday, I made my way to the front row of Kresge Auditorium to witness Maya Beiser’s Uncovered concert. Jherek Bischoff stood on the left of the stage with his Hofner bass (similar to Paul McCartney’s but with F-Holes), the drummer, Matt Kilmer, was all set with his sticks, and Maya Beiser positioned herself in the center, with her electric cello.

Boston Calling took place in City Hall Plaza this past weekend, and the entire area buzzed with energy and excitement the whole time. Surrounding the two stages were dozens of tents where local companies and vendors sold food, flower crowns, and handed out samples. People flowed in and out between performances, but there was also a constant, huge mass of people right in front of the stages, waiting for the next performer to come out. The energy increased greatly during performances, fed by both the performers’ and the crowd’s excitement to be there. The crowd danced and sang along with the performers, all whilst cheering, tossing around beach balls, and waving their arms and blue light sticks along to the music (in the attempt to join the camaraderie, someone even waved his crutch instead). Boston Calling is truly an event that captures the youthful and fun personality of Boston.

Alex Cauneac ’19 of the MIT men’s tennis team made it all the way to the final four, before bowing out to Bowdoin College freshman Luke Tercek, 6-0, 6-2, in the semifinals of the USTA/ITA New England Regional Tournament which was held at Williams College over the weekend.

The MIT men’s soccer team is off to hot start this season (6-1, 2-0 in conference) thanks to their premier center forward Sean Bingham ’16. Bingham has found the back of the net a team-leading eight times and has the New England Women’s and Men’s Athletic Conference (NEWMAC) regular season title in his sights. Bingham ’16, a former NEWMAC athlete of the year, is September’s player of the month.

The MIT women’s volleyball team scored straight-set victories over Smith College and Regis College this past weekend. Abby Bertics ’19 shone for the Engineers with 10 kills against Smith while Alli Davanzo ’18 and Megan Gebhard ’17 racked 8 kills apiece against Regis College. With the twin killing MIT improved to 13-1 overall and 4-0 in the conference.

When I learned I got into MIT, I worried more about the swim test and PE requirements than about the academics. 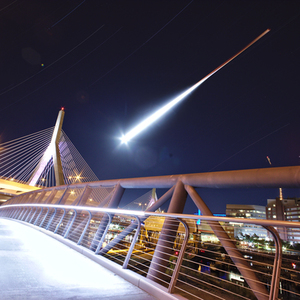 A long exposure image of the first half of the Sept. 27 lunar eclipse, taken from near Boston’s Zakim Bridge, showing the moon’s decreasing luminosity and characteristic red hue at totality resulting from the wavelength-dependent Rayleigh scattering of the earth’s atmosphere. The image was taken by stacking 320 images taken at 30-second intervals.

So how exactly do I make an app?

It might be exaggeration on my part to say that I’m wholly illiterate, but compared to the ever-expanding language of computers, my programming experience pretty much equates to knowing the alphabet. Two Saturdays ago, equipped with a somewhat functioning knowledge of command prompt and for loops, I entered the cavernous hub of ingenuity that is HackMIT. 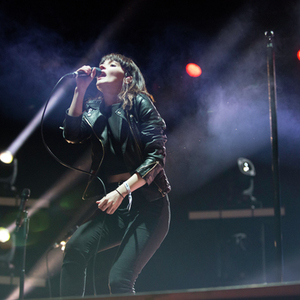 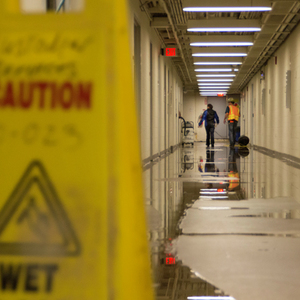 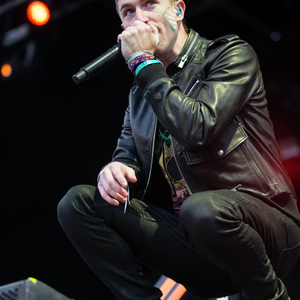 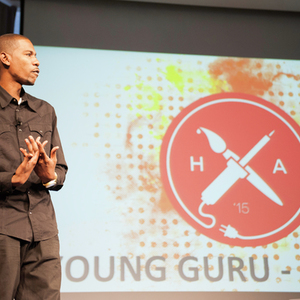 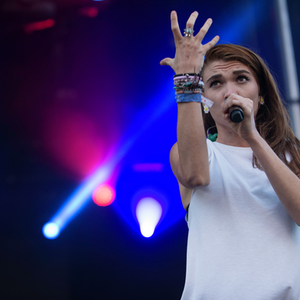 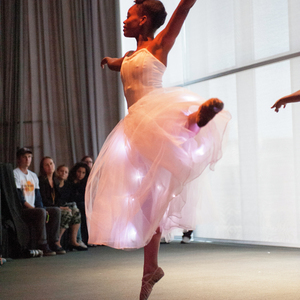 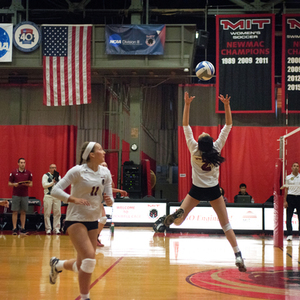 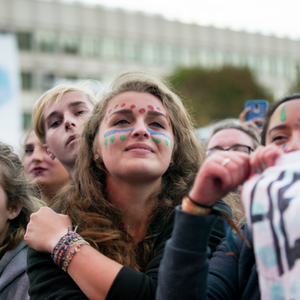 Fans of Walk the Moon emulate their trademark facepaint and enjoy the show after waiting hours and working their way to the front of the crowd.
JESSICA L. WASS—The Tech 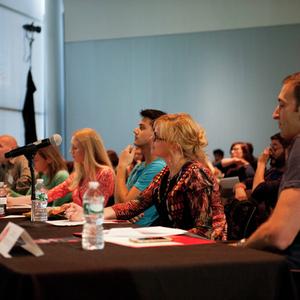 A panel of judges hears the final pitches on Sunday at the conclusion of the Hacking Arts hackathon. The panel included Carrie Fitzsimmons from ArtScience Labs, Sally Wolf from Time Warner, amd Daniel Doubrovkine from...
Lenny Martinez—The Tech 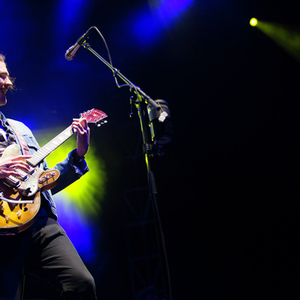 Hozier played a late slot on Sunday consisting of many of his hits and a few notable covers.
JESSICA L. WASS—The Tech 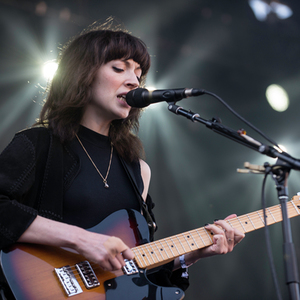 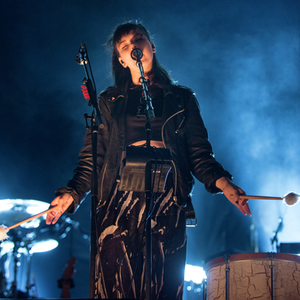 Of Monsters and Men, despite playing an earlier slot in the festival, delivered a killer performance.
JESSICA L. WASS—The Tech 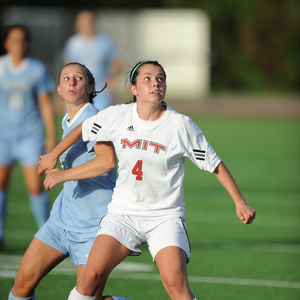 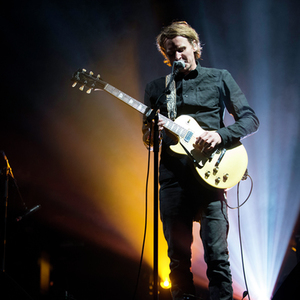 Ben Howard filled his late slot delivering many of his hits to a receptive crowd.
JESSICA L. WASS—The Tech 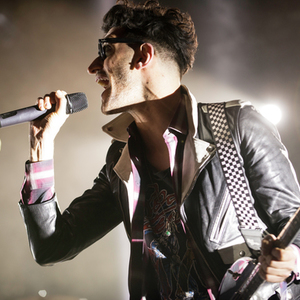 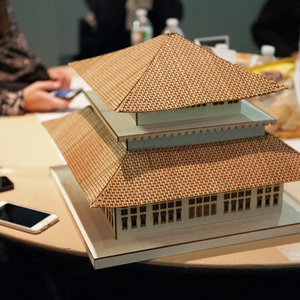 Team LockAR’s cipher art. The various panels of the building can be scanned in a specific order to reveal hidden information.
Lenny Martinez—The Tech 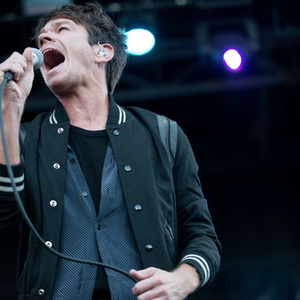 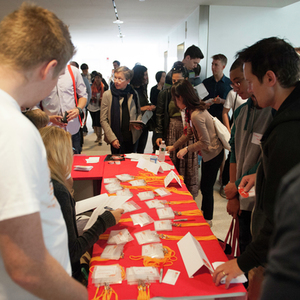 An early Saturday morning in September found many hackers, artists, and designers gathering at the Media Lab for Hacking Arts 2015. The event included a conference, a tech expo and a hackathon centered around technolo...
Lenny Martinez—The Tech 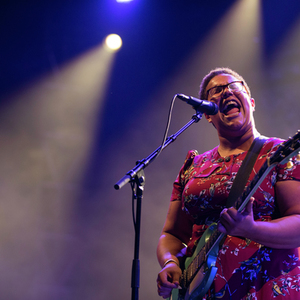 Alabama Shakes closed out the festival on a high note with their set coinciding with the super moon eclipse.
JESSICA L. WASS—The Tech 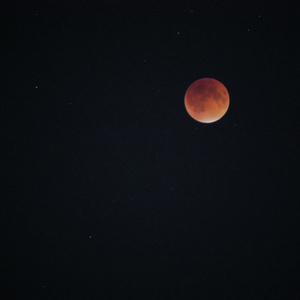 A “blood moon” lit the night sky on Sunday. A lunar tetrad, or a fourth consecutive total lunar eclipse with no partial eclipses in between, coincided with a supermoon, or a full moon that is also at its closest appro...
NICHOLAS D. CURTIS
All Photos From Issue