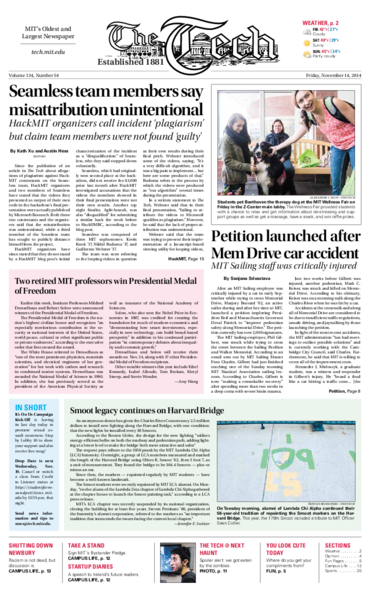 After an MIT Sailing employee was critically injured by a car in early September while trying to cross Memorial Drive, Marjory Bravard ’02, an active sailor during and after her time at MIT, launched a petition imploring President Reif and Massachusetts Governor Deval Patrick to “improve pedestrian safety along Memorial Drive.” The petition currently has over 2,000 signatures.

Since the publiation of an article in The Tech about allegations of plagiarism against HackMIT contestants on the Seamless team, HackMIT organizers and two members of Seamless have stated that the videos they presented as output of their own code in the hackathon’s final presentation were actually published by Microsoft Research. Both these two contestants and the organizers said that the misattribution was unintentional, while a third member of the Seamless team has sought to publicly distance himself from the project.

Dozens of members of the MIT community reported being victims of phone scams last week, in which they received seemingly legitimate calls from local police departments demanding money.

Earlier this week, Institute Professors Mildred Dresselhaus and Robert Solow were announced winners of the Presidential Medal of Freedom. 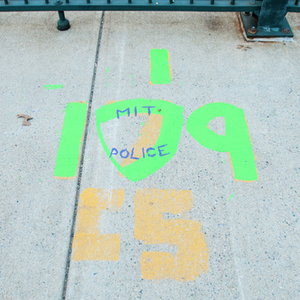 An anonymous donor has given the Charles River Conservancy 2.5 million dollars to install new lighting along the Harvard Bridge, with one condition: that the new lights be installed every 30 Smoots.

It’s On Us Campaign Kick-Off is having its last day today to promote sexual assault awareness. Stop by Lobby 10 to show your support and also receive free swag!

The HackMIT article in the Friday, Nov. 7 issue incorrectly referred to the class year of HackMIT organizer Richard Z. Ni ’15 as a ’16.

Watch for a hint of winter this weekend

For most of the country, the last week has been exceptionally cold as a frigid Canadian air mass left many of the states between the Great Lakes and the Rockies with snow cover and a reminder that colder weather is approaching. The Great Lakes region could see some lake-effect snow today as Northwesterly winds blow cold air over the relatively warm lake water. The signs of winter will also be apparent in the Cambridge area as it is likely to snow in the early morning today and temperatures will dip below freezing tonight and tomorrow night. The highs this weekend aren’t likely to get much higher than 40°F, and the moderate Northwesterly winds will make it feel colder still. It’s time to get used to these temperatures, as next week doesn’t project to be much warmer. 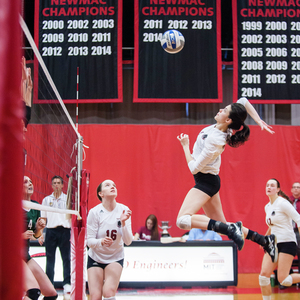 The MIT women’s volleyball team will be making the program’s 16th appearance in the NCAA Division III Tournament after receiving an at-large bid on Monday morning. The Engineers will square off with Rivier University on Friday, November 14 at Williams College. The meeting will be the first between both squads in post-season action and sixth overall since the series began in 2009. In addition to the host Ephs, the rest of the regional bracket features Sage Colleges, Babson College, Colby-Sawyer College, Bowdoin College, and Regis College.

For the fourth consecutive season, the MIT women’s soccer team will be competing in the NCAA Division III Women’s Soccer Tournament after receiving an at-large bid on Monday afternoon. MIT will be a host site for this weekend’s first and second round tournaments. First round games will occur on Saturday, November 15 at 11:00 a.m. and 1:30 p.m., and the second round game will begin at 1 p.m. on Sunday, November 16. MIT will begin postseason play against Colby-Sawyer.

The universe in a nutshell

To be or not to be, that is the question. 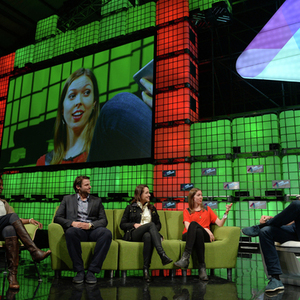 Not your typical Wednesday

On a typical Wednesday, I only have two standing appointments: a marketing class and a comparative literature class focused on leadership stories and ethics. The rest of the day is filled with group meetings, homework, a visiting speaker session every now and then, and of course, sleeping in, thanks to my afternoon classes.

This week marked the launch of the MIT “It’s On Us” campaign. “It’s On Us” is a national awareness campaign developed by the White House in order to eliminate sexual assault on college campuses. As a part of the “It’s On Us, MIT” campaign, students, faculty and staff are invited to sign the MIT Bystander Pledge. The pledge was written by MIT students of the Title IX Working Group, the student-staff coalition that organized the It’s On Us campaign at MIT.

Where Newbury Street becomes the Boston Public Gardens, a large crowd of people of various ethnicities, genders, nationalities, colors, and ages began to march. To the brunch-eaters who paused mid-bite of quiche to try to make out what we were chanting; to the annoyed trio of girls whose path to Urban Outfitters we blocked with the incessant stream of bodies; to the tourists trapped between a fence and our anger with no choice but to hear our message: I do not apologize. 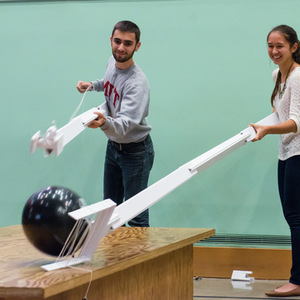 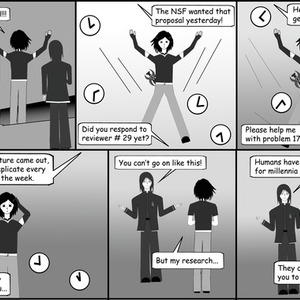 Erica Danielle Swallow, an MBA candidate at the Sloan School of Management, speaks on a panel alongside fellow MBAs during the Web Summit in Dublin.
Courtesy of Sportsfile

Meryl E. Gibbs ’16 leaps to spike the ball during Sunday’s NEWMAC championship game against second seed Babson College, which they lost by a slim margin during the last match. Regardless, the team, 27-5 for the season...
Daniel Mirny—The Tech 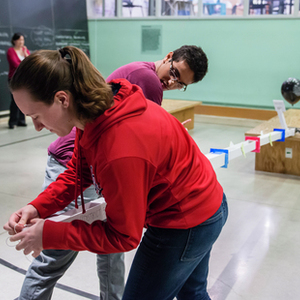 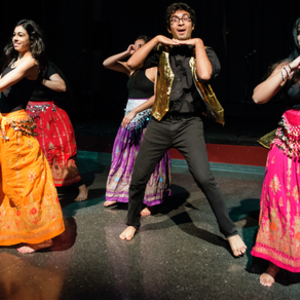 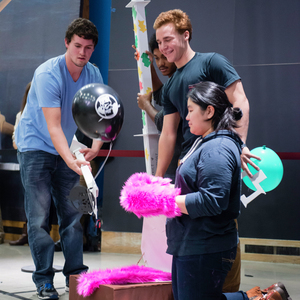 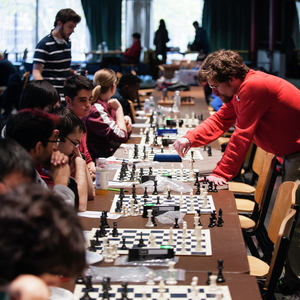 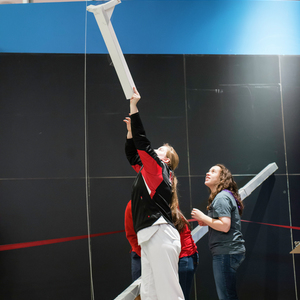 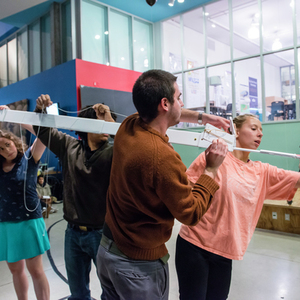 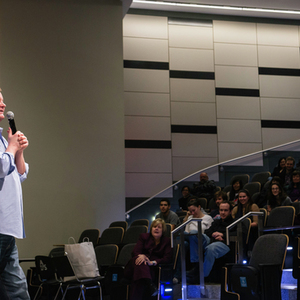 Comedian Michael Somerville performs in front of an audience at 10-250 on Saturday. The event, which featured teasing jabs at MIT as well as humorous remarks about his relationships with women, was hosted by the de Fl...
Kento Masuyama—The Tech 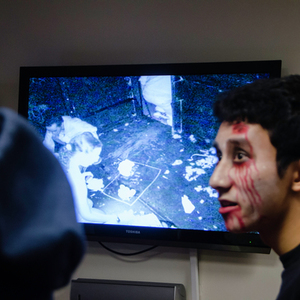 A blood-stained zombie watches the progress of a team through the haunted house.
Melissa Renée Schumacher—The Tech 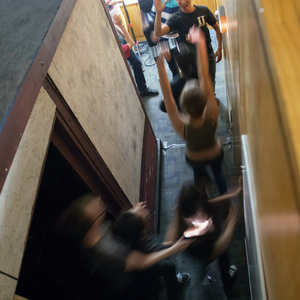 A team celebrates successfully making it out of the haunted house.
Alexander C. Bost—The Tech 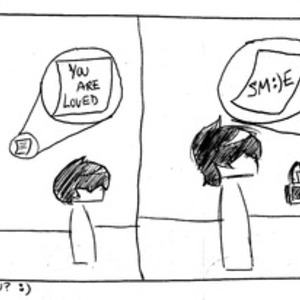 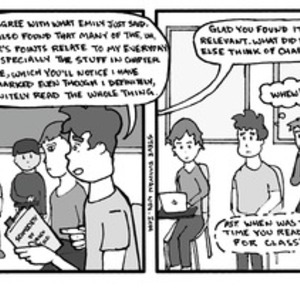 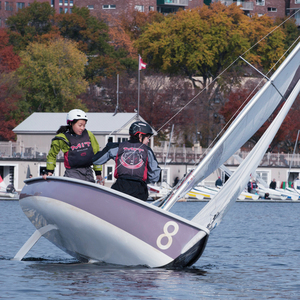 Paige Omura ‘17 and Ty Ingram ‘18 compete in the Crews Regatta on Sunday. Each boat is manned by a skipper and a crew, so in the Crews Regatta, the crew becomes the skipper. Two MIT teams participated, and they placed...
melissa renée schumacher—The Tech 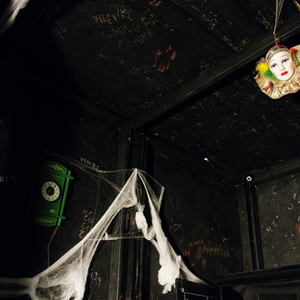 The ceiling of the second room of the haunted house, where teams had to unlock a zombie-filled cabinet in order to get to the next room.
Alexander C. Bost—The Tech 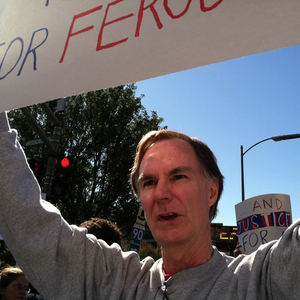 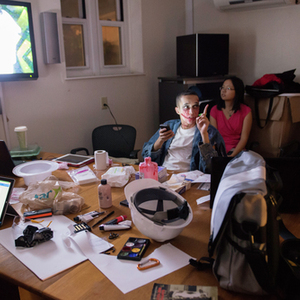 The control room where Next Haunt operators monitored the status of teams as they went through the house via infrared camera.
Alexander C. Bost—The Tech 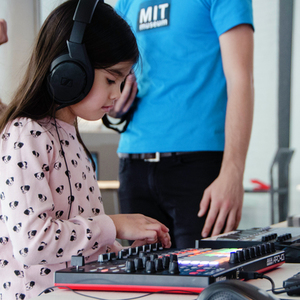 A young girl learns how to DJ at the sound technology exhibit at Girls Day on Saturday at the MIT Museum. The event featured nine hands-on exhibits geared toward young women interested in careers in science and engine...
Melissa Renée Schumacher—The Tech 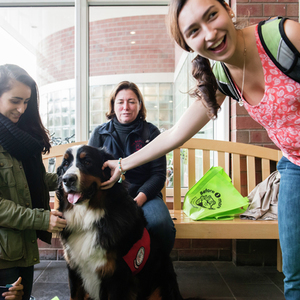 Students pet Beethoven the therapy dog at the MIT Wellness Fair on Friday in the Z-Center main lobby. The Wellness Fair provided students with a chance to relax and get information about de-stressing and support group...
Alexander C. Bost—The Tech 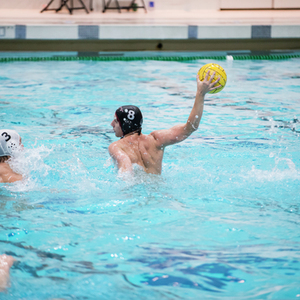 Ory Tasman ‘16 takes a shot on goal during MIT’s 11-9 victory over Connecticut College on Saturday night. The game was the second of three this weekend as part of the Collegiate Water Polo Association (CWPA) Northern ...
Alexander C. Bost—The Tech
All Photos From Issue