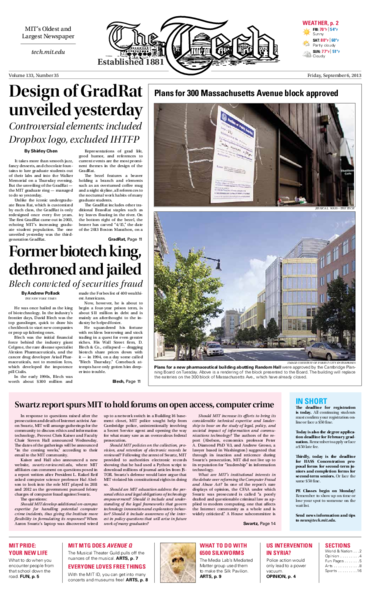 He was once hailed as the king of biotechnology. In the industry’s frontier days, David Blech was the top gunslinger, quick to draw his checkbook to start new companies or prop up faltering ones.

In response to questions raised after the prosecution and death of Internet activist Aaron Swartz, MIT will arrange gatherings for the community to discuss ethics and information technology, Provost Chris Kaiser and Faculty Chair Steven Hall announced Wednesday. The dates of the gatherings will be announced “in the coming weeks,” according to their email to the MIT community.

Fossil fuels are the new tobacco: a divestment focus

It takes more than smooth jazz, fancy desserts, and chocolate fountains to lure graduate students out of their labs and into the Walker Memorial on a Thursday evening. But the unveiling of the GradRat — the MIT graduate ring — managed to do so yesterday.

CAIRO — A powerful bomb blasted through a convoy of cars carrying the interior minister along a residential street Thursday, raising fears of a widely predicted turn toward terrorist violence by supporters of Egypt’s ousted president, Mohammed Morsi.

In Syria, Iraqis see replays of their past and fears for future

BAGHDAD — Abu Mohaned spent Tuesday night washing the bodies of victims of that evening’s car bombs, preparing them for burial. When a couple of roadside bombs went off the next day, he did the same thing.

SYDNEY — Prime Minister Kevin Rudd, who emerged triumphantly from the political wilderness to regain Australia’s leadership earlier this year, is battling widespread predictions of a defeat in federal elections Saturday that would bring an end to his party’s tumultuous six years in power.

HONG KONG — A court in northwest China sentenced a former provincial safety official Thursday to 14 years in prison for graft, a year after he became a symbol of a callous and corrupt bureaucracy when Chinese Internet users circulated photographs suggesting he had been living beyond his means.

Fall semester has arrived and with it autumn weather. The overnight lows are dipping below 60°F, resulting in chilly mornings perfect for intense outdoor exercise. Daytime high temperatures will remain in the 70s°F for the next few days, with partly cloudy skies but no significant precipitation expected. Elsewhere in the Northeast, areas of MA, NY, VT, NH, and ME expected their first frost and freeze warnings this morning.

Europe offers compromise to US on airline emissions taxes

BRUSSELS — Seeking to end years of acrimony, the European Union has made concessions to the United States to try to gain support for global rules on airline emissions.

FRANKFURT, Germany — The president of the European Central Bank issued a sober assessment of the eurozone economy, saying Thursday that he was “very, very cautious” about prospects for growth and acknowledging concern about shock waves from the civil war in Syria.

The US should not intervene in Syria

Most, if not all, Americans are at least vaguely aware of the cruel and miserable war taking place in the streets and countryside of Syria. Over the last two years, the Assad regime has clashed with a heterogeneous rebel group known as the Free Syrian Army (FSA) and other oppositional entities, most significantly the Al-Nusra Front — a radical Islamist group with ties to Al-Qaeda. Recently, President Obama announced that he would leave the decision of whether or not to engage the U.S. military against the Assad regime up to Congressional vote, an action that has sparked a national debate over the merits of U.S. interventionist foreign policy in the case of the Syrian conflict. 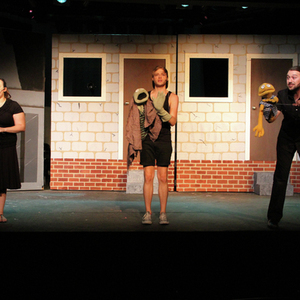 A charming romp through the troubles of adult life 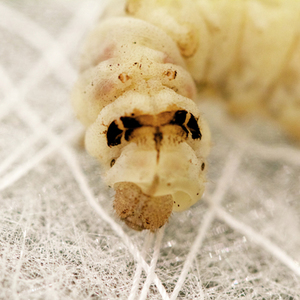 The Silk Pavilion is a gauzy hemisphere of sparse silk threads, with apertures arranged in an asymmetric but balanced pattern and many small, dense, circular patches of silk filaments that were spun directly onto it by live silkworms. The scaffold is composed of several panels with irregular patterns of silk thread to support the silk spun by Bombyx mori, the most widely cultivated species of silkworm.

What your MITID can do for you

Your MIT ID can get you free or heavily discounted admission to nearby arts venues. The Council for the Arts at MIT gifts these memberships and discounts as a way to greaten students’ exposure to and appreciation for the arts. The following is a list of the places where you can flash your card. In addition, you can use it to check out museum passes from Hayden Library for guests in town.

People don’t generally think of MIT as an athletic powerhouse. What they don’t know is that in addition to 33 varsity sports, MIT has 35 club sports teams — and they’re really good. Last season, many club teams made it to the national championships in their sports, and individuals from each team excelled. Here are last season’s highlights from some of MIT’s club sports teams.

After scoring the lone goal of the game against Simmons College the night before, Michaelann Rodriguez ’14 scored both of MIT’s goals against Worcester State University to lead the Engineers to a 2-0 win over the Lancers at home on Tuesday evening. MIT is now 2-1 for the season, while Worcester State fell to 1-1. 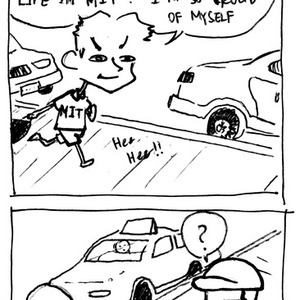 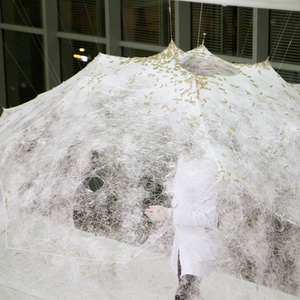 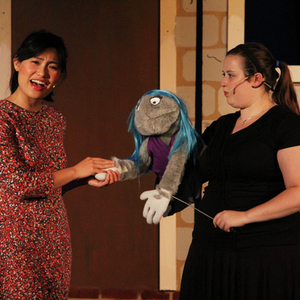 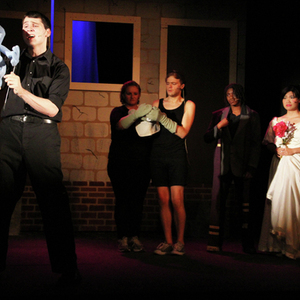 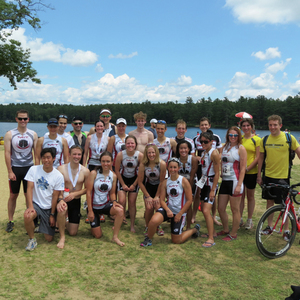 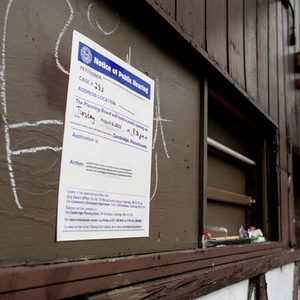 Signs announcing a public hearing on the 300 Massachusetts Avenue project were placed on buildings along the whole 300 block. All of the businesses facing Mass. Ave on this block are now closed.
Jessica L. Wass—The Tech 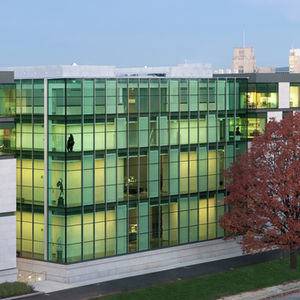 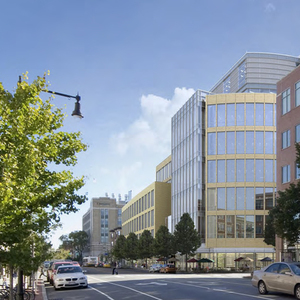 Plans for a new pharmaceutical building abutting Random Hall were approved by the Cambridge Planning Board on Tuesday. Above is a rendering of the block presented to the Board. The building will replace the eateries o...
Image courtesy of Forest city Enterprises
All Photos From Issue