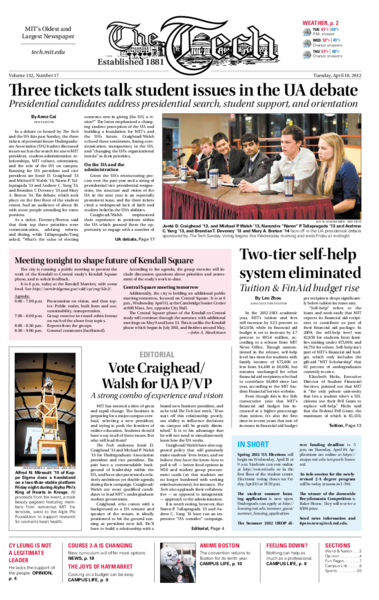 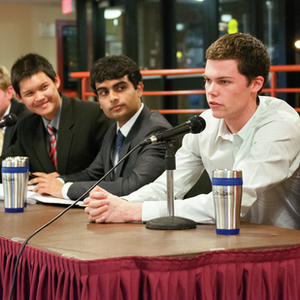 In a debate co-hosted by The Tech and the UA this past Sunday, the three tickets of potential future Undergraduate Association (UA) leaders discussed issues such as the search for a new MIT president, student-administration relationships, MIT culture, orientation, and the role of the UA on campus. Running for UA president and vice president are Jonté D. Craighead ’13 and Michael P. Walsh ’13, Naren P. Tallapragada ’13 and Andrew C. Yang ’13, and Brendan T. Deveney ’13 and Mary A. Breton ’14. The debate, which took place on the first floor of the student center, had an audience of about 30, with more people attending for some portions.

Spring 2012 UA Elections will begin on Wednesday, April 11 at 9 a.m. Students can vote online at http://vote.mit.edu or in the first floor of the student center. Electronic voting closes on Friday, April 13 at 11:59 p.m.

The Department of Mechanical Engineering (Course 2) is making major changes to its 2-A program, which will take effect for the Class of 2016. A pilot program for current freshmen who choose to opt in will take place in Fall 2012.

An an article published last Friday on David House’s lawsuit against the federal government gave conflicting information about the date his laptop was seized. His laptop was taken on Nov. 3, 2010, as the article stated initially, not in “spring of 2010,” as it stated later. 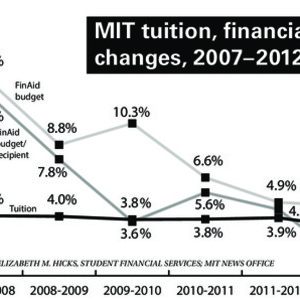 In the 2012-2013 academic year, MIT’s tuition and fees will increase by 3.25 percent to $42,050, while its financial aid budget is set to increase by 4.7 percent to $95.6 million, according to a release from MIT News Office. Though unmentioned in the release, self-help level has risen for students with family income of $75,000 or less from $4,400 to $6,000, but remains unchanged for other financial aid recipients who had to contribute $6,000 since last year, according to the MIT Student Financial Service website.

MIT mechanical engineering postdoc Yaron Segal, 30, was arrested on March 28 for allegedly arranging a sexual encounter with what he thought was a mother and her two underage children.

The city is running a public meeting to present the work of the Kendall-to-Central study’s Kendall Square phase, and to solicit feedback.

KUROSHIO, Japan — The simulations shocked this sleepy community nestled on the tip of Japan’s Shikoku island: A huge undersea quake could bring a tsunami as high as 112 feet here, a government-appointed expert panel said.

Seasonable weather will continue this week

After a historically warm winter, and a spring that featured temperatures upwards of 80°F in its first few days, the Boston area has returned to more seasonable temperatures for the past two weeks. This trend will continue this week, with daily highs and lows expected to be within a few degrees of their normal values.

The global gold rush in technology patents gained pace Monday when Microsoft agreed to pay more than $1 billion for 800 patents held by AOL.

Food prices push rate of inflation up in China

HONG KONG — The China inflation rate edged up in March, data released Monday showed, in a development that may dampen, but not eliminate, the chances of Beijing’s announcing added steps to prop up the flagging pace of growth.

Tunisia cracks down again on protestors defying a ban

CAIRO — The 6-month-old government of Tunisia cracked down with tear gas and batons Monday on thousands of protesters who filled a central artery of the capital in defiance of a new ban on demonstrations there.

LONDON — A senior Iranian official hinted Monday that Iran would consider limits on its home-grown stockpile of enriched uranium, offering what seemed a modest compromise to partly meet Western concerns ahead of the planned resumption this week of nuclear talks with a group of six global powers.

MIT has entered a time of great and rapid change. The Institute is preparing for a major campus overhaul, selecting a new president, and trying to push the frontiers of online education. Students should have a say in all of these issues. But who will lead them?

Voters, fortunately, have a tough choice this year

On March 14, 2012, I attended the CIS (Center for International Studies) sponsored book event by Trita Parsi at MIT [1]. I shall refrain from commenting on his book and instead refer those interested to the Jan. 23, 2012 Wall Street Journal article by Sohrab Ahmari titled “It Takes Two to Engage” [2]. However I would write about the question I wanted to ask from Abbas Maleki, the discussant at the event, but I couldn’t.

The legitimacy of CY Leung

On March 25, Leung Chun-Yin (梁振英) was elected as the fourth-term Chief Executive of Hong Kong by a 1,200 member committee of academics and businesspersons. Leung, former convenor of the Non-Official Members of the Executive Council, won 689 votes. The competitors, Henry Tang (唐英年), former chief secretary of the city government, and Albert Ho (何俊仁), a lawmaker, garnered 285 votes and 76 votes respectively. But the public approval for Leung is an all-time low (popularity ratings are below 35 percent), and allegations made against Leung’s background are surfacing more and more (he was part of the Communist Party, etc.). His victory raises the question for the seven million concerned citizens of Hong Kong, what is on Leung’s agenda?

English soccer club Liverpool F.C. plans to start their North American preseason tour at Fenway Park on July 25, when they will play prominent Italian club A.S. Roma. Historically, Liverpool has been one of the top teams in the English Premier League as well as a consistent contender in the European Champions league. In 2010, Fenway Sports Management, the owners of the Red Sox, purchased the English club. Coincidently, another Boston group acquired the ownership rights to A.S. Roma recently as well. In an effort to broaden Liverpool’s fanbase in America and pique interest in the sport, the club has decided to play a few exhibition matches in the United States. According to Liverpool’s owner, John W. Henry, the match will be part of Fenway’s 100th Year Anniversary celebration.

Starter Torre M. Swanson ’12 pitched a masterful, complete-game shutout as the Engineers dispatched the Springfield College Pride, 10-0, in the first game of Saturday’s doubleheader at MIT. Given plenty of baserunners due to the erratic pitching of Springfield starter Greg Marakovits, the Engineers seized every opportunity in building an early lead for Swanson. Leading 2-0 headed into the bottom of the third inning, the Engineers combined two hits with three walks and a hit batsman to produce four runs, advancing runners on both wild pitches thrown during the inning. The six-run deficit put the game out of reach for Springfield as Swanson retired 14 straight batters to start the game. Swanson’s perfect effort was finally broken up when Pride catcher Matt Milano doubled in the bottom of the fifth. With two outs in the top of the seventh and a 10-0 lead, Swanson nearly lost the shut-out when Milano hit a hard shot down the right field line with designated hitter Karl Quist on first base. However, the ball was ruled out of play and Milano was held to a double. Swanson shut the door on Springfield and preserved the shut out with his third strikeout of the day. 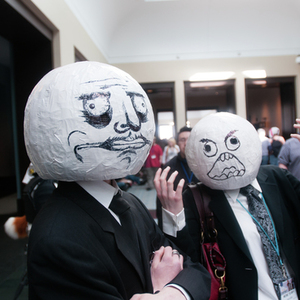 Students and passersby taking the T this past weekend were likely baffled by the high number of folks in strange costumes; they were here due to the arrival of two conventions in town. Cosplayers flocked to Boylston for Anime Boston, and to south Boston for the Penny Arcade Expo (PAX). I split my time between the two cons, though I spent considerably less time at Anime Boston than PAX — I was there only for Saturday morning. This is Anime Boston’s 10th year since its inception in 2003, when it was created by the New England Anime Society Inc.

It’s not you, it’s a disease

We MIT kids are a messed up bunch. Alright, fine, I haven’t been immersed in enough collegiate environments to say that we are more or less messed up than anyone else our age, but still — we have problems. Over the last three and a half years, I’ve met a lot of people who are having a really crappy time and think there’s no feasible way to improve their lives. I’m not talking about your run-of-the-mill, overworked MIT students, I’m talking about people whose relationship with life is tenuous at best. People who are suffering because of their anxiety, lack of motivation, sadness, or whatever else. I’m extrapolating from what I’ve seen first-hand, but it’s a safe bet that there’s a silent fraction of MIT students who are experiencing some kind of depression but not addressing it. 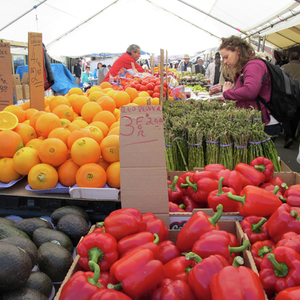 Campus Life outside the mit bubble

Carrots, characters, and cheeses, oh my! Haymarket provides a variety of foods for a student’s budget

An Italian friend who has lived in Boston for five years, and is a cooker and a baker from the bottom of her heart, was the one to introduce me to Haymarket. She told me stories about the variety of produce, and above all, how cheap it can be, though the value depends on some variables, e.g., the fruit is not the freshest. The market, which originated in 1742, is open every Friday and Saturday from 7 a.m. to 6 p.m. and is right outside the Haymarket Station on the Orange and Green Lines — very close to Faneuil Hall and across the street from the North End area. 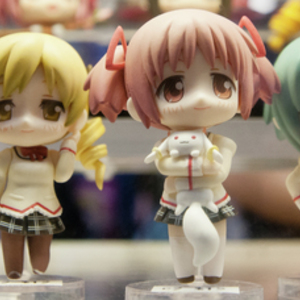 A number of figurines were for sale in the dealer room at Anime Boston.
Jessica J. Pourian—The Tech 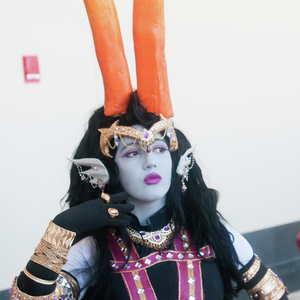 A cosplayer dressed as Betty Crocker aka Her Imperious Condescension from Homestuck poses for the camera.
Connor Kirschbaum—The Tech 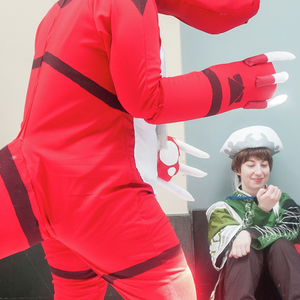 An attendee cosplays as Guilmon, from the TV series Digimon.
Connor Kirschbaum—The Tech 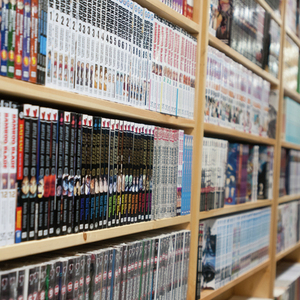 Rows upon rows of manga were for sale at Anime Boston in the dealer room.
Connor Kirschbaum—The Tech 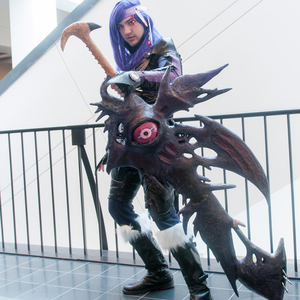 A display of colorful fruits and vegetables in Haymarket. The variety and good prices make Haymarket a great place to get supplies to fill fridges with nutritious items.
fabiola michel—The Tech 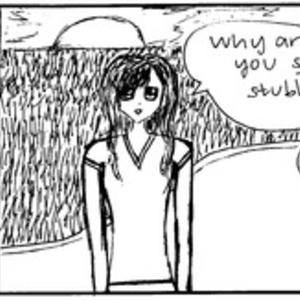 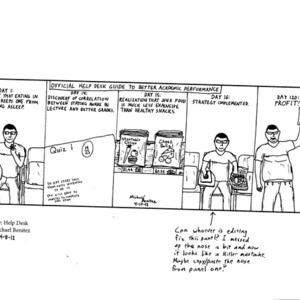 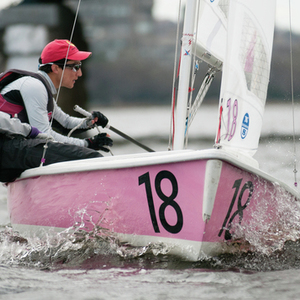 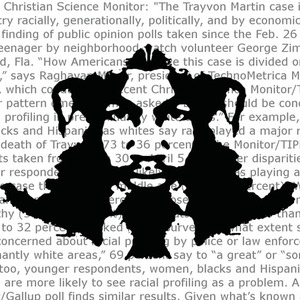 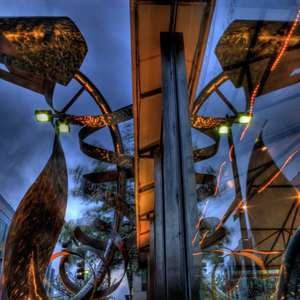 This was taken at Legal Seafood at sunset. I nearly missed the reflection the first time around. The lack of warm colors in the sky provides a nice contrast to the incandescent lighting of the fish. At first, I though...
Tiffany Huang—The Tech 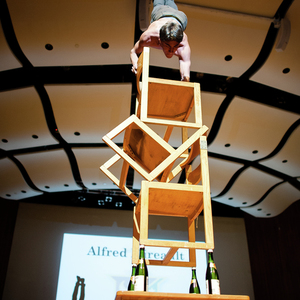 Alfred N. Mireault ’15 of Kappa Sigma does a handstand on a less-than-stable platform Friday night during Alpha Phi’s King of Hearts in Kresge Auditorium. All proceeds from the event, a male beauty pageant featuring m...
Christopher A. Maynor—The Tech
All Photos From Issue