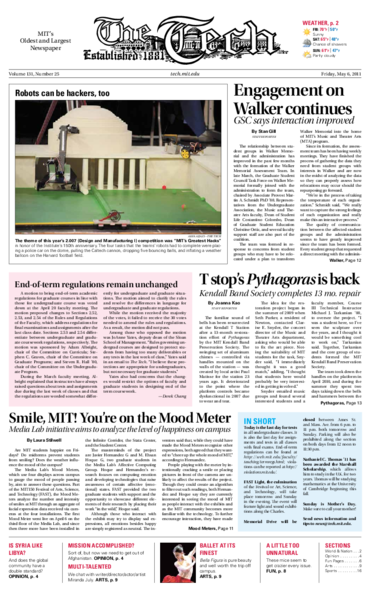 Are MIT students happier on Fridays? Do midterms prevent students from smiling? Does the weather influence the mood of the campus? 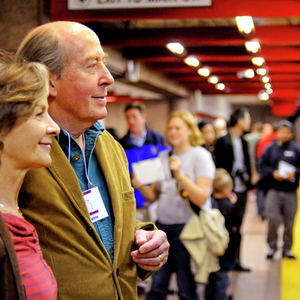 T stop’s Pythagoras is back

The familiar sound of bells has been resurrected at the Kendall T Station after a 13-month restoration effort of Pythagoras by the MIT Kendall Band Preservation Society. The swinging set of aluminum chimes — controlled via handles mounted on the walls of the station — was created by local artist Paul Matisse for the station 23 years ago. It deteriorated to the point where the platform controls became dysfunctional in 2007 due to wear and tear. 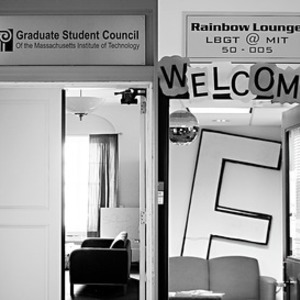 The relationship between student groups in Walker Memorial and the administration has improved in the past few months with the formation of the Walker Memorial Assessment Team. In late March, the Graduate Student Council Task Force on Walker Memorial formally joined with the administration to form the team, chaired by Associate Provost Martin A. Schmidt PhD ’88. Representatives from the Undergraduate Association, the Music and Theater Arts faculty, Dean of Student Life Costantino Colombo, Dean of Graduate Student Education Christine Ortiz, and several faculty support staff are also part of the coalition.

Companies are lining up to go public. Market conditions are favorable. Investor appetite is strong.

A sports article published last Tuesday incorrectly stated that the MIT baseball team would be playing in the NEWMAC conference tournament this weekend. MIT competed in the tournament last weekend, on April 30.

ROME — The United States announced Thursday that it would try to release some of the more than $30 billion in assets seized from Libya’s leader, Moammar Gadhafi, as international officials said they would create a fund to give money directly to the Libyan rebels.

WASHINGTON — House Republicans signaled Thursday that they were backing away from the centerpiece of their budget plan — a proposal to overhaul Medicare — in a decision that underscored both the difficulties and political perils of addressing the nation’s long-term fiscal problems.

BAGHDAD — A suicide bomber attacked a police training center Thursday in the predominantly Shiite city of Hilla, south of Baghdad, killing 25 people and wounding at least 75 in the second major bombing in Iraq this week.

WASHINGTON — After reviewing computer files and documents seized at the compound where Osama bin Laden was killed, U.S. intelligence analysts have concluded that the chief of al-Qaida played a direct role for years in plotting terror attacks from his hideout in Abbottabad, Pakistan, U.S. officials said Thursday.

BEIRUT — Syrian security forces raided a restive Damascus suburb on Thursday, going house to house and arresting scores of men in a broad campaign that activists and U.S. officials say represents a new chapter in the crackdown on the country’s uprising against four decades of authoritarian rule.

Historic flooding along the Mississippi

To add to the torrent of tragic and destructive weather that has afflicted the southern half of the country over the past few weeks, the Mississippi River now is flooding. Affecting thousands of people spanning the corridor from Illinois to Louisiana, the river continues to swell due to unceasing rain and upstream snowmelt. In order to protect populated areas, Army engineers already destroyed some levees downstream to release excess water, immersing vast expanses of farmland.

WASHINGTON — After losing a contentious battle last year over creating an agency to protect consumers against deceptive financial products, Republicans are fighting the battle again, determined to rein in the independence and financing of the agency.

Rights, not bureaucracy, are imperative

This Friday marks the sixth week of widespread political protests across Syria, where hundreds have been killed on the streets and thousands more are still missing. Shockingly, however, the United Nations Security Council was not able to release even a press statement criticizing the violence in Syria. This stands in stark contrast to the firm international stance taken against Libya, and clearly demonstrates the corruption and inefficiency of the United Nations. Nothing but hypocrisy can explain the enforcement of a no-fly zone over Libya for humanitarian purposes, and yet not demand a mere utterance against the ongoing slaughter in Syria.

In the aftermath of the U.S’s successful strike in Abbottabad, much attention has been given to what Osama bin Laden’s death means for the war on terror. Was bin Laden still an operational leader within al-Qaida, and if so, how much does his death hamper the group’s ability to conduct terrorism? Will jihadists still be able to recruit, fundraise, and coalesce under a single banner without their premier standard-bearer? How much safer is the United States with the world’s number one mass-killer moldering at the bottom of the ocean? 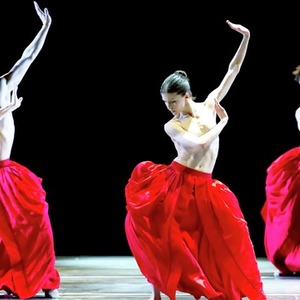 Tearing myself away from campus during the MIT150 open house to watch Bella Figura was a difficult feat. But as I watched the ballet, I knew it was a worthy sacrifice. I glued my eyes to the stage, completely blown away by the beauty of movement and the emotions that the dancers imparted to the audience.

BOOK REVIEW Giving back the funk?

Perhaps I can explain the draw of Tony Rauch’s new book, eyeballs growing all over me … again, rather quickly through one analogy: The Mysteries of Harris Burdick (1984, Chris Van Allsburg). Harris Burdick was a collection of illustrations by Van Allsburg, each accompanied by a title and a single line of text. The goal, according to elementary school teachers, was to make children think creatively and come up with stories incorporating the text and the picture. “Mr. Linden’s Library,” a picture of a sleeping girl and vines sprouting from the binding of an open book in front of her, sparked a sea of creative juices from excited fifth graders; eyeballs does the same thing for the more mature reader. 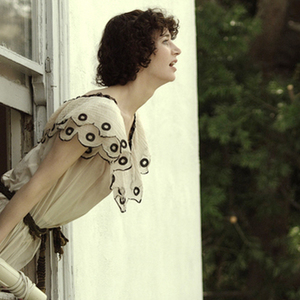 INTERVIEW Storyteller of the ordinary and the fantastical

At age 37, independent film director, actress, artist, writer, and musician Miranda July already has various forms of creative work under her belt, ranging from web-based experimental projects to novels and multimedia performance. July’s stories, inspired by magical realism and the avant-garde, often involves ordinary settings and situations examined in great depths. Her most eminent work, Me and You and Everyone We Know (2005), won several awards, including Caméra d’Or at the Cannes Film Festival and Special Jury Prize at the Sundance Film Festival. July visited Boston last week to present her latest movie, The Future, at The Independent Film Festival Boston (IFFBoston), which took place from April 27 to May 4 and had more than 100 film screenings in theaters across Cambridge and Boston. At a roundtable, The Tech had the opportunity to speak with July about independent films, the artistic process, and, yes, school.

In its inaugural season, squads from the MIT Sporting Clays Association took fourth and fifth place at the New England Clay Cup on April 16. Shooters from MIT competed in trap, a shotgun shooting discipline in which small clay discs flying away from the shooter at 30 mph are targeted 30–40 yards downrange. Hitting the target requires identifying its trajectory, correcting for lead, aiming, and firing within 1° accuracy — all within a second. Cumulative scores are tabulated from four rounds of 25 targets.

In its inaugural season, squads from the MIT Sporting Clays Association took fourth and fifth place at the New England Clay Cup on April 16. Shooters from MIT competed in trap, a shotgun shooting discipline in which small clay discs flying away from the shooter at 30 mph are targeted 30–40 yards downrange. Hitting the target requires identifying its trajectory, correcting for lead, aiming, and firing within 1° accuracy — all within a second. Cumulative scores are tabulated from four rounds of 25 targets.

As we approach the later rounds of the 2011 NBA Playoffs, the team-to-team matchups are incredibly exciting. First, the experienced Los Angeles Lakers are up against the Dallas Mavericks and their high-powered offense. With so many players gracing the stage, there’s just so much to watch for: the slithering drives of the Lakers’ Kobe Bryant (the Black Mamba) into the lane, the physical play of Lakers Pau Gasol, Lamar Odom, and Andrew Bynum inside the paint on both offense and defense, the sharpshooting of the Dallas power forward Dirk Nowitzki, the brilliant passing of Jason Kidd, and the acrobatic moves and unique shooting style of Shawn Marion. This is all against the backdrop of the intense sportive atmosphere brought about by the Staples Center in Los Angeles and the American Airlines Center in Dallas.

Paul Matisse, the artist behind the Pythagoras musical sculpture in the Kendall T station, attends the Kendall Band re-installation ceremony on April 30. In 2010, the MIT Kendall Band Preservation Society embarked on ...
Sina mohammadi

Several of Walker Memorial’s student groups, pictured in this December 2010 file photo. The Walker Memorial Assessment Team is evaluating the feasibility of using Walker as a space for Music and Theater Arts, which co...
photoillustration by jessica liu; photos by Melissa Renée Schumacher—tech file photo 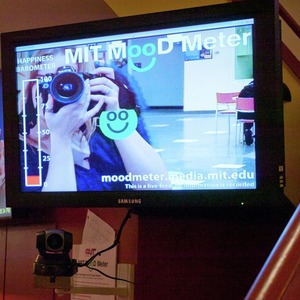 “Mood Meters,” a FAST Art Festival installation, have taken up residence in the Infinite Corridor, the Stata Center, the Media Lab, and the first floor of the Student Center.
Jessica l. wass—The Tech 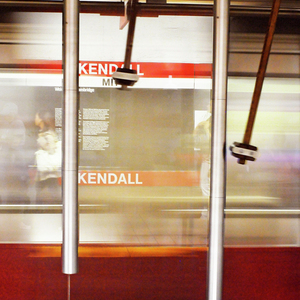 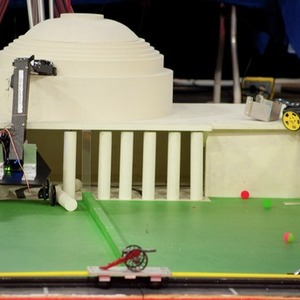 The theme of this year’s 2.007 (Design and Manufacturing I) competition was “MIT’s Greatest Hacks” in honor of the Institute’s 150th anniversary. The four tasks that the teams’ robots had to complete were placing a po...
Arfa Aijazi—the tech
All Photos From Issue