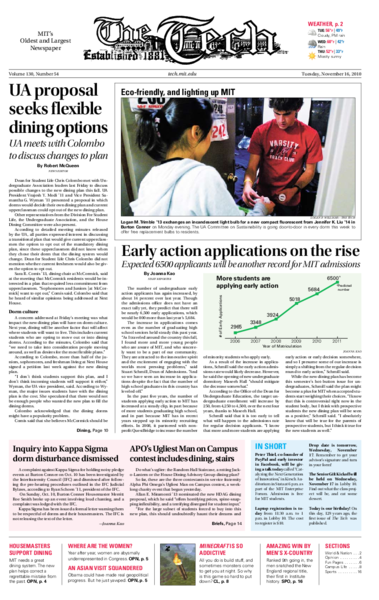 Dean for Student Life Chris Colombo met with Undergraduate Association leaders last Friday to discuss possible changes to the new dining plan this fall. UA President Vrajesh Y. Modi ’11 and Vice President Samantha G. Wyman ’11 presented a proposal in which dorms would decide their own dining plan and current upperclassman could opt out of the new dining plan.

Early action applications on the rise

The number of undergraduate early action applicants has again increased, by about 14 percent over last year. Though the admissions office does not have an exact tally yet, they predict that there will be nearly 6,500 early applications, which would be 800 more than last year’s 5,684.

A complaint against Kappa Sigma for holding noisy pledge events at Burton Conner on Oct. 10 has been investigated by the Interfraternity Council (IFC) and dismissed after following the pre-hearing procedures outlined in the IFC Judicial Bylaws, according to Ryan Schoen ’11, president of the IFC.

Republicans have a change of heart about earmarks

WASHINGTON — Senate Republicans opened the lame-duck session of Congress on Monday by signaling their commitment to the antispending posture that fueled their big gains Election Day, underscoring the Tea Party movement’s influence on the Republican leadership.

For the next generation of Beatles fans, the wait could soon be over.

SHANGHAI ­— Fire engulfed a high-rise apartment building undergoing renovations in the center of this city Monday afternoon, killing at least 53 people and injuring at least 90 others in one of the deadliest fires here in years, according to Xinhua, the official news agency.

A year after it began reviewing whether energy drinks that combine alcohol and caffeine are safe or legal, the Food and Drug Administration is expected to take a stand on the drinks as soon as Wednesday, according to law enforcement officials in several states.

SAN FRANCISCO — Since the heyday of AOL’s cheery “You’ve got mail” greeting, e-mail has been central to the online experience for millions of people.

The House ethics committee ruled Monday that there was evidence to support 13 counts of misconduct by Rep. Charles B. Rangel, D-N.Y., and began considering whether to formally convict and recommend punishment against him.

The gorgeous weather this past weekend was displaced by a weak cold front that crossed the area Sunday and Monday. Low level easterly flow yesterday brought moisture off of the Atlantic, causing there to be low clouds throughout the day.

In September 2011, a new dining plan will be implemented in the residence halls where we are faculty housemasters. This new plan will be one of the most positive developments in the residential system in years. It will elevate the quality of dining significantly by providing nutritious, high quality, affordable meals to our residents. Just as important, the plan will provide a platform for the re-integration of house dining with the educational mission of the Institute.

Too few cracks in the glass ceiling

Everyone knew going in that this primary election would entail huge gains for Republicans. What was predicted by few, and perhaps cared about by even fewer, was the consequence this election would have for the representation of women in Congress: that is, complete stagnation.

The moment was ripe with promise. China, after years of careful diplomacy and a burnishing of its image as a gentle giant, had spent the past year bullying its neighbors in territorial disputes and rattling its saber over territorial waters. Pakistan had proved itself an incapable ally in the war on terror, and a re-alignment in Central Asia was needed. North Korea had grown erratic, and a conference with regional allies was needed to determine what should be done. This was a moment of great potential, an opportunity for the U.S. to position itself as a power broker and balancer in the Pacific, to court India as a hedge against Chinese power and promoter of stability in the region, to draw contingency plans with South Korea, and to create the institutions and ties that would solidify a lasting American influence.

Rail’s value can’t be measured by its cost

After months of intense training and preparation, including members competing on the U.S. national collegiate team over the summer, the MIT Sport Taekwondo Club took first place at the first Eastern Collegiate Taekwondo Conference (ECTC) tournament of the season, held at MIT on Saturday, October 23rd. The team, coached by Master Dan Chuang and led by team captains Jason J. Uh ’10 and Erika Lee ’12, fought their way through an event with approximately 450 competitors from over 20 schools in order to clinch the victory. The tournament, run by members of the MIT Sport Taekwondo Club, was the largest ever all-collegiate taekwondo tournament ever held in the United States.

The MIT men’s basketball team, which rose as high as No. 8 in the national rankings last season, will be looking to continue to build on last year’s success and have another championship caliber season. After winning the NEWMAC regular-season and Tournament championships, earning consecutive bids to the NCAA Division III Tournament, and securing its third All-American in six years, MIT is rapidly establishing a reputation. The Engineers, who debuted at No. 15 in the D3Hoops Pre-Season Top 25, return four starters from last season’s 22-5 team, who accounted for 89 percent of their scoring and 81 percent of their rebounding.

The MIT men’s and women’s cross-country teams traveled to Mt. Greylock High School in Williamstown, Massachusetts on Saturday with their sights set on qualifying for the NCAA Division III Championship.

A diamond in the rough, miles underground

Seemingly in defiance of all logical conventions of game development, a computer game called <i>Minecraft</i> is quickly gaining popularity. Ordinarily, this wouldn’t be a big deal — statistically speaking, some games have to do well. What makes <i>Minecraft</i> unusual is that it’s still in development, with a dev team of approximately one. With some exaggeration — the core gameplay idea comes from <i>Infiniminer</i> by Zachtronic Industries, and the audio and art assets have their own designers — <i>Minecraft</i> is designed and programmed by Markus Persson and his company Mojang Specifications. 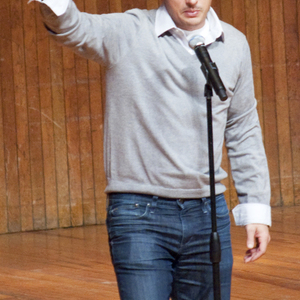 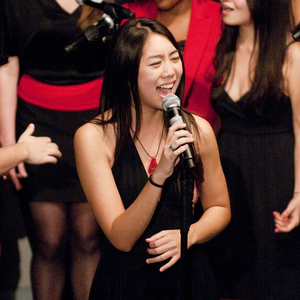 Mimi Yen ’11 sings a moving version of Maria Mena’s “Just Hold Me” at the Chorallaries’ “CSI: MIT” concert this past Saturday evening in 10-250. Through online donations and a raffle, the Chorallaries managed to raise...
Yuanyu Chen—The Tech 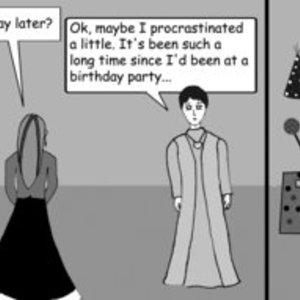 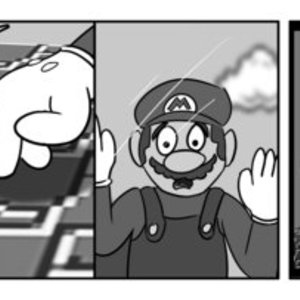 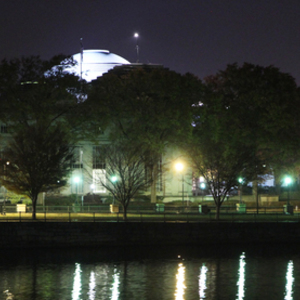 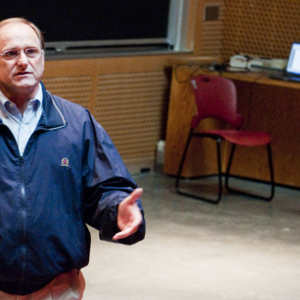 U.S. Representative Michael Capuano (Massachusetts 8th district) addressed members of the National Association of Graduate-Professional Students on issues including education and the economy during the organization’s ...
Arfa Aijazi—The Tech 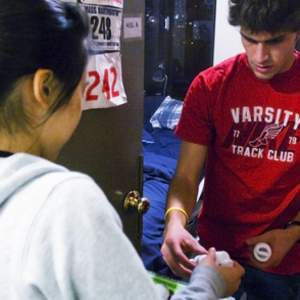 Logan M. Trimble ’13 exchanges an incandescent light bulb for a new compact fluorescent from Jennifer K. Liu ’14 in Burton Conner on Monday evening. The UA Committee on Sustainability is going door-to-door in every do...
Logan P. WIlliams—The Tech 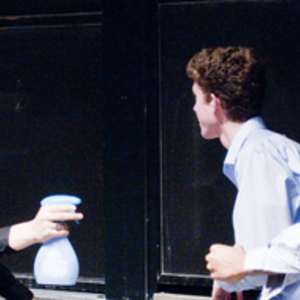