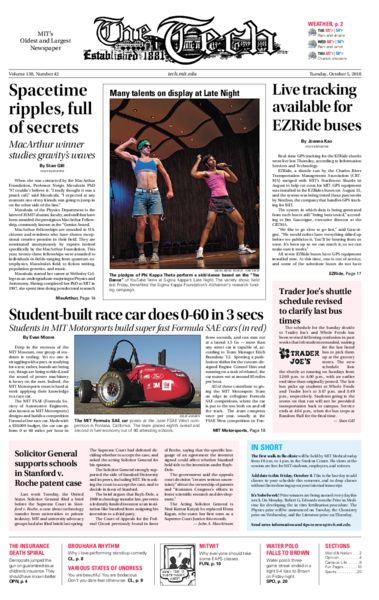 The schedule for the Sunday shuttle to Trader Joe’s and Whole Foods has been revised following confusion in past weeks that left students stranded, waiting for the last listed bus to pick them up at the grocery stores. The new schedule lists the shuttle as running on Sundays from 12:00 p.m. to 4:00 p.m., with an earlier end time than originally posted. The last bus picks up students at Whole Foods and Trader Joe’s at 3:47 p.m. and 3:49 p.m., respectively. Students going to the stores on that run will not be provided transportation back to campus. Service ends at 4:04 p.m., when the bus stops at Random Hall for the final time.

Deep in the recesses of the MIT Museum, one group of students is tooling. Yet no one is struggling with a pset, or studying for a test; rather, boards are being cut, things are being welded, and the sound of power machinery is heavy on the ears. Indeed, the MIT Motorsports team is hard at work applying their knowledge to a race car.

The Nobel prize in physiology or medicine has been awarded this year to Robert G. Edwards, an English biologist who with a physician colleague, Patrick Steptoe, developed the in vitro fertilization procedure for treating human infertility.

Toiling against a deadly disease to save a threatened frog

SEQUOIA AND KINGS CANYON NATIONAL PARKS, Calif. — From the summit of Bishop Pass in the Sierra Nevada, elevation 11,972 feet, all you can see are miles of granite peaks against the sky. There is no traffic and no pollution. The natural world seems pure and unspoiled.

When she was contacted by the MacArthur Foundation, Professor Nergis Mavalvala PhD ’97 couldn’t believe it. “I really thought it was a prank call,” said Mavalvala. “I expected at any moment one of my friends was going to jump in on the other side of the line.”

Last week Tuesday, the United States Solicitor General filed a brief before the Supreme Court in <i>Stanford v. Roche</i>, a case about technology transfer from universities to private industry. MIT and university advocacy groups had also filed briefs last spring. The Supreme Court had deferred deciding whether to accept the case, and asked the acting Solicitor General for his opinion.

FRESNO, Calif. — When Seth Walsh was in the sixth grade, he told his mother he had something to say.

Jury begins deliberations in murders of mother and two daughters

NEW HAVEN, Conn. — After hearing weeks of often gruesome testimony, and with more than 200 pieces of trial exhibits to sift through, jurors on Monday began deliberating the charges against a parolee accused in a home invasion in Cheshire, Conn., that left a mother and her two daughters dead.

WASHINGTON — A coalition of Hispanic groups on Monday applauded the Senate’s confirmation of two Latino presidential appointees, but urged lawmakers to push through a backlog of nominations when it returns after the Nov. 2 midterm elections.

COLORADO SPRINGS, Colo. — When it hit the streets here last week, the latest issue of <i>ReLeaf</i>, a pullout supplement to <i>The Colorado Springs Independent</i> devoted to medical marijuana, landed with a satisfying thud.

ISLAMABAD — More than a dozen oil tankers carrying fuel for NATO troops in Afghanistan were torched in Rawalpindi early Monday, not far from Pakistan’s capital and the headquarters of the military, police officials said.

In Haiti, pressure rising for displaced to vacate church

PORT-AU-PRINCE, Haiti — As tent camps go, the one on the 28-acre Church of God property overlooking the Valley of Bourdon is almost bucolic, with hundreds of canvas-draped shelters under leafy shade trees and a cohesiveness among residents. But panic is building there.

JERUSALEM — Arsonists suspected of being radical Israeli settlers damaged part of a Palestinian mosque early Monday in a village near the West Bank city of Hebron, setting fire to rugs and copies of the Quran and scrawling the word “revenge” in Hebrew on a wall, police officials and witnesses said.

JERUSALEM — Arsonists suspected of being radical Israeli settlers damaged part of a Palestinian mosque early Monday in a village near the West Bank city of Hebron, setting fire to rugs and copies of the Quran and scrawling the word “revenge” in Hebrew on a wall, police officials and witnesses said.

A wet and windy week

A large low pressure system currently situated off the Mid-Atlantic coast will drift slowly northward this week, bringing more cloudy, windy, and rainy conditions to our area. The slow, meandering track of this storm means that these unfavorable conditions will persist for the majority of the week. While rain and drizzle will hang around for most of the day today, Wednesday will likely be the worst day of the week, with winds increasing and rain becoming heavy at times. The system will gradually move out on Thursday, with rain tapering off.

The danger when renovations run late

Over the summer, MacGregor was extensively renovated, which is a good thing. It means that we can now turn our heat up or down, the shower feels like a firehose, and there’s no more asbestos killing us as we sleep. MIT also installed a completely new fire alarm system. And although the voice that tells us to evacuate the building is terribly annoying, I can forgive that small deficiency since it might save my life. But there is another problem that is a bit more troubling.

The view from a PBE parent

To those we’ve entrusted:

As a Financial Systems Manager at Harvard University, whose son is an active member of Phi Beta Epsilon, one of my highest priorities is data security. Hacking into a system and stealing files is regarded as a serious offense. MIT has chosen to interpret certain benign pledge rituals at PBE as hazing while completely ignoring the fact that the basis of the charge stems from a hacked computer file.

Caught in a death spiral

When the Patient Protection and Affordable Care Act (the moniker that D.C’s word doctors chose for the health care reform bill) was debated in Congress, many of its proponents described the main components of the bill — an individual insurance mandate, guaranteed issue provisions that prevent exclusion based on pre-existing conditions, and subsidies for poorer citizens — as a three-legged stool. Remove just one of the legs, they explained to colleagues looking to reduce the scope of reform, and the whole thing would fall down.

Between Febuary 1692 and May 1693 in Salem Village, Massachusetts, twenty nine men and women were tried and convicted of witchcraft. Salem Village had a “zero tolerance” policy for witchcraft, which was at the time a capital felony. Nineteen of the convicted witches went to the gallows. A twentieth man was crushed to death during attempts to draw out a confession. Luckily, the right lessons were learned, and the state of Massachusetts was never again the host of such a gross miscarriage of justice. That is until, September 2010. I welcome you, ladies and gentlemen, to the first case of the Cambridge Hazing Trials. And sadly, it might not be the last.

Two MIT alumni, Skip Dise ’03 and Stephen F. Young ’09, will be headed to the 2010 World Rowing Championships in New Zealand later this month as members of the United States National Team. Young will cox the men’s lightweight eight, and Dise will row in the bow seat of that boat. Dise and Young were both selected to the lightweight eight as a result of their performance in the selection camp in Oklahoma City, Oklahoma. 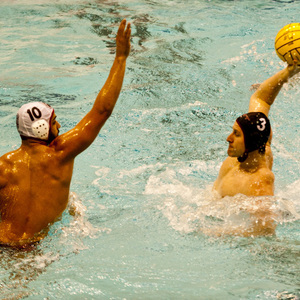 On a rainy, windy Friday night, the MIT men’s water polo team faced Brown University in the Z-Center pool. Although the Engineers failed to extend their winning streak to four games, falling 5-4, the match was filled with excitement.

This past Thursday, MIT women’s tennis visited Tufts. They put up a good effort, but were overwhelmed by their opponents, losing by an overall score of 8-1.

It’s a good thing laughter is the best medicine

Oh, stand-up comedy, you sultry minx. I’d always admired you from afar, watching your constantly growing harem of intrepid men and women perform in your name. Those whom you graced with your muse-like powers constantly amazed me, but I never even dared to hope to dream to imagine of even thinking of you as my mistress. Everything changed when one of your favored disciples appeared to train me in your mysterious ways, and I at last slowly stepped into your sphere of influence. Though I am yet a novice in your seductive ways, I consider myself unspeakably fortunate to even occasionally be in your cool embrace.

While waiting to board a plane to Berlin this summer, I got completely absorbed by an article printed on a foreign issue of Cosmopolitan on — get this — sex positions for a woman to camouflage the parts of her body that she hates. As in, “Hate your tummy? Try reverse cowgirl!” 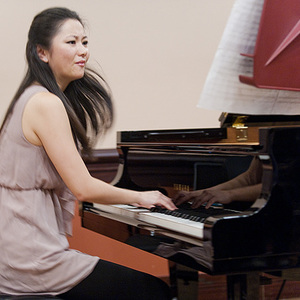 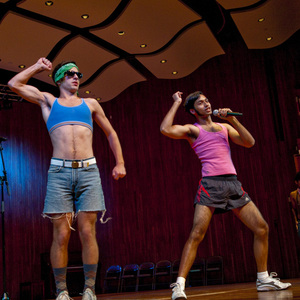 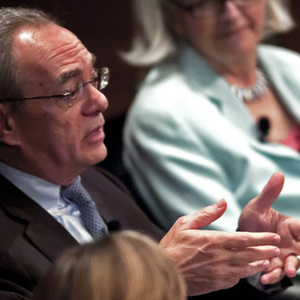 Provost L. Rafael Reif speaks during the question and answer phase of Wednesday’s State of the Institute address. During the annual summary of the Institute’s financial and strategic positions, administrators emphasi...
Sam Range—The Tech

Gavin Darcey ’11 takes a shot past a Brown defender during Friday’s water polo game. MIT went on to lose 5-4 in a close game.
Jessica L. Wass 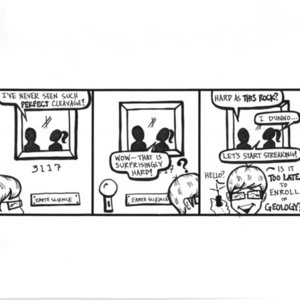 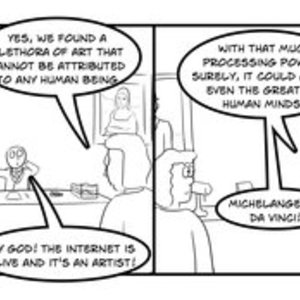 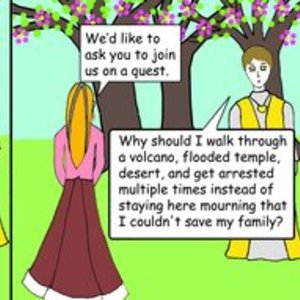 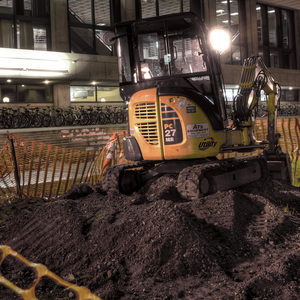 Construction crews broke ground for the installation of a new sculpture in front of W20. The piece, by Jaume Plensa, is scheduled to be installed in November.
Sam Range—The Tech 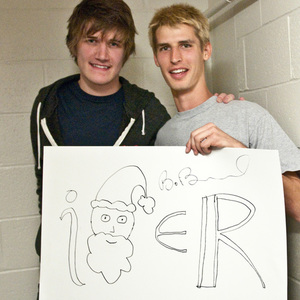 Comedian Robert “Bo” Burnham poses with fan Stephen A. McCrory ’14 (right) after performing in Kresge last Saturday. Stephen surprised the audience during the show with a poster depicting “i times Santa is real,” a li...
Sarang Kulkarni—The Tech 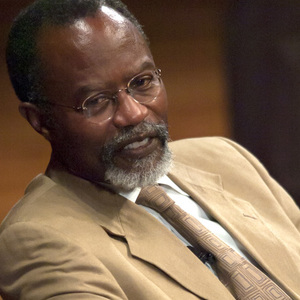 Phillip L. Clay PhD ‘75 speaks during the question and answer phase of the State of the Institute address on Wednesday. During the annual summary of the Institute’s financial and strategic positions, administrators e...
Sam Range—The Tech 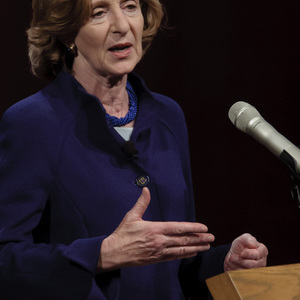 President Susan Hockfield delivers opening remarks at Wednesday’s State of the Institute address. During the annual summary of the Institute’s financial and strategic positions, administrators emphasized the stabilit...
Sam Range—The Tech
All Photos From Issue