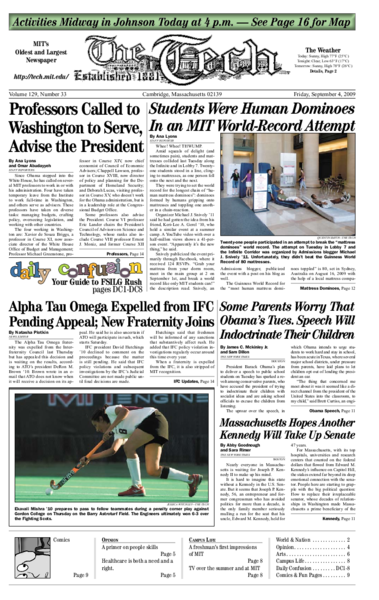 The Alpha Tau Omega fraternity was expelled from the Interfraternity Council last Thursday but has appealed this decision and is waiting on the results, according to ATO’s president DeRon M. Brown ‘10. Brown wrote in an e-mail that ATO does not know when it will receive a decision on its appeal. He said he is also uncertain if ATO will participate in rush, which starts Saturday.

Massachusetts Hopes Another Kennedy Will Take Up Senate

Nearly everyone in Massachusetts is waiting for Joseph P. Kennedy II to make up his mind.

Some Parents Worry That Obama’s Tues. Speech Will Indoctrinate Their Children

President Barack Obama’s plan to deliver a speech to public school students on Tuesday has sparked a revolt among conservative parents, who have accused the president of trying to indoctrinate their children with socialist ideas and are asking school officials to excuse the children from listening.

Fraternity Rush 2009 (as appeared in print)

CORRECTION TO THIS ARTICLE: The below schedule, which appears as it was printed in the Sept. 4 issue of The Tech, contains numerous inaccuracies. A corrected version of the schedule has been published online and in a flyer distributed at the Greek Griller.

Professors Called to Washington to Serve, Advise the President

Since Obama stepped into the White House, he has called on several MIT professors to work in or with his administration. Four have taken temporary leave from the Institute to work full-time in Washington, and others serve as advisers. These professors have taken on diverse tasks: managing budgets, crafting policy, overseeing legislation, and working with other countries.

Because of erroneous data provided by the Interfraternity Council, the fraternity rush Daily Confusion published in Friday’s <i>Tech</i> contained numerous inaccuracies. Fraternity rush chairs were asked to review their chapters’ entries and the requested corrections were made in this reprinted version. Enjoy Rush! 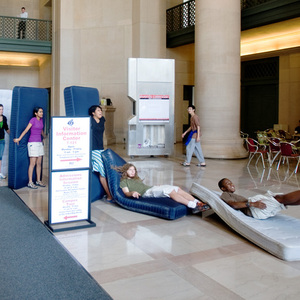 Students Were Human Dominoes In an MIT World-Record Attempt

All events start at Lobdell Dining Hall in the Student Center.

18 Are Killed at MexicanDrug Rehab Center

As many as a dozen masked men armed with automatic weapons stormed into a drug rehabilitation center in this violent border city on Wednesday night, lined up recovering drug addicts and alcoholics against a wall and opened fire at point-blank range, killing 18 people.

His body betraying him for reasons he could not understand, Lou Gehrig came to bat at Yankee Stadium in the fourth inning against the Washington Senators on April 29, 1939.

Unseasoned investigators from the SEC were alternately intimidated and enthralled by a name-dropping, yarn-spinning Bernard Madoff as he dodged questions about his financial house of cards, according to a scathing new report on the agency’s repeated failure to uncover the fraud.

President Barack Obama’s plan to deliver a speech to public school students on Tuesday has sparked a revolt among conservative parents, who have accused the president of trying to indoctrinate their children with socialist ideas and are asking school officials to excuse the children from listening.

Obama Advisers Are Split On Size of Afghan Force

The military’s anticipated request for more troops to combat the insurgency in Afghanistan has divided senior advisers to President Barack Obama as they try to determine the proper size and mission of the U.S. effort there, officials said Thursday.

Berlusconi Clashing with Catholic Church Over His Lifestyle

For months, the staid newspaper of the Italian Bishops’ Conference, Avvenire, steered largely clear of the major topic of conversation here: the spicy personal life of Prime Minister Silvio Berlusconi.

Who Will Sawyer Replace at ‘Good Morning America’?

When David Westin solved his evening news problem with the promotion of the “Good Morning America” co-host Diane Sawyer this week, he created a much more onerous problem for himself in the morning.

While New England has recently felt the effects of Hurricane Bill and Tropical Storm Danny in the Atlantic, two other tropical cyclones are currently causing trouble in the Pacific Ocean. Recently, Hurricane Jimena has impacted areas of Northwest Mexico, strengthening to the verge of Category 5 status on the Saffir-Simpson Hurricane Wind Scale. On August 31, Jimena had sustained winds of 150 miles per hour while off of the Mexican West coast. Since then, the hurricane made landfall near Cabo San Lazaro, Mexico as a Category 2 storm. As of Thursday evening, Jimena continues to churn as a Tropical Storm over the Gulf of California. Meanwhile, in the East Pacific Ocean, Tropical Depression Dujuan formed on September 2nd about 80 km east of the Philippines, and is forecast to attain hurricane strength and impact the Japanese islands by the end of next week.

For Healthcare, Rights Are Right

In a September 1 column (“For Healthcare, Right is Wrong”) in <i>The Tech</i>, Joe Maurer argues that healthcare, prescription drugs, and emergency room treatment are not constitutionally-protected and inalienable rights, but goods and services to be earned through the acquisition of wealth. Maurer argues that healthcare is akin to property — an essential to life that is universally accessible in that those with sufficient wealth can always have it, but not universally provided for. Maurer also makes an economic argument — nonessential services like education and public safety economically benefit the country as a whole and thus are provided for in part or wholly by the government. “The purpose of any government subsidy or support,” writes Maurer, “is to encourage more of a desirable thing. No one with a medical ailment needs encouragement from a government to remedy their problem.”

The Vices and Virtue of Goldman Sachs

Goldman Sachs has been recently labeled as a “giant vampire squid wrapped around the face of humanity” by <i>Rolling Stone</i> writer Matt Taibbi. All of a sudden, Goldman Sachs has become the pinnacle of greed and corruption in the eye of the public.

Welcome to MIT! You’ve spent long hours with Isaac Asimov books and hardcover editions of the Feynmann lectures, worked extra hard on that SAT Writing section, and now you’ve finally arrived at the premiere science and engineering institution in all of the known universe. Congratulations!

As a communications professional, I understand that one of the goals of communication is to get the audience’s attention. Perhaps East Campus had this goal in submitting descriptions for their events during REX in the 8/28 issue. Well, they certainly got my attention. I was both disgusted and insulted by the language and perverse, misogynistic content. I believe that the content constitutes sexual harassment. Let me quote to you from MIT’s community standards:

MOVIE REVIEW ★ ★ Designed for Destruction and Hope In ‘9’

Darkness and destruction pervade throughout much of <i>9</i>, directed by Shane Acker and produced by Tim Burton (<i>The Nightmare Before Christmas</i>, <i>Batman</i>, <i>Sweeney Todd: The Demon Barber of Fleet Street</i>). Based on the Academy Award-nominated animated short film of the same name, <i>9</i> takes place after humans have been annihilated by machines, leaving the world in rubble and ruin. The hero is a rag doll who is initially unable to speak but has an adventurous streak. He meets 2, a kind and industrious individual who enables 9 to speak. A mechanized beast captures 2 and injures 9, setting the rest of the film into motion.

My piano teacher used to cringe at the mention of Vladimir Horowitz. The Russian pianist was known for his particularly bad posture: sitting with the keyboard chest-level, Horowitz’s fingers would lie flat on the keys, tips almost pointed upwards as he played. Regardless, it’s hard to imagine another twentieth-century pianist who had such influence on the piano literature and the face of piano performance. Despite his questionable stance at the piano, Horowitz managed startling technical prowess at the keyboard, often performing musical acrobatics that were inaccessible to his contemporaries, premiering works both composers and performers thought impossible and forever changing what was considered par for his medium.

If you haven’t had the curiosity (or stomach) to check Jaume Collet-Serra’s appropriately horrific horror thriller <i>Orphan</i>, this interview with screenwriter David L. Johnson might do the trick in explaining the motives behind the film’s mysterious topic. I caught up with the busy writer–first-time father-to-be at the Comic-Con in San Diego last month. Clearly a part of the Comic-Con community, Johnson has worked with Marvel Comics legend Stan Lee when he adapted one of his original ideas into a two-hour teleplay for TBS Superstation.

ARTS FEATURE For the Comic Book Guy in All of Us

The action at Comic-Con officially started on Preview Night on July 22, with Warner Bros. Television’s sneak previews of “Human Target,” “V,” and “The Vampire Diaries,” all three of which, I have to say, left me with a vague sense of déjà vu, especially in the vampire department. “V,” however, is interesting in terms of high-tech visuals. The mosaicked mirrors of the Mothership beaming Morena Baccarin’s elfin face over Los Angeles are quite a sight.

Being home all summer has brought about a realization about my time at MIT.

Not All White, Still All Nerdy

MIT never seemed like a feasible option for college for me. The Massachusetts Institute of Technology was something for Nobel Laureates, audio company founders, renowned architects, and Iron Man. Not for me, someone who applied to MIT without any expectation of acceptance whatsoever. 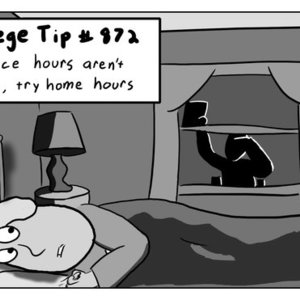 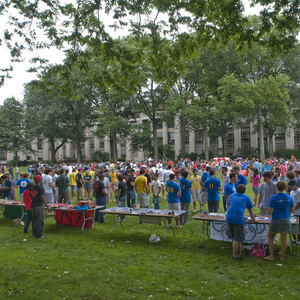 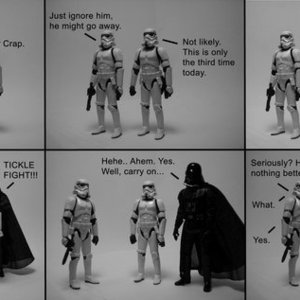 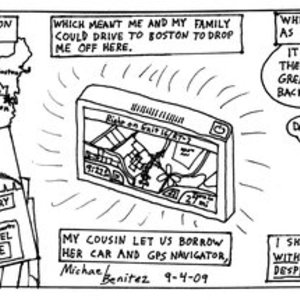 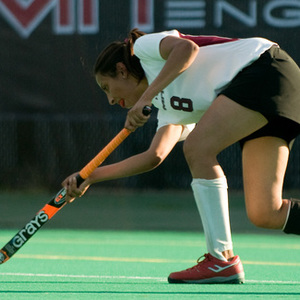 Ekavali Mishra ’10 prepares to pass to fellow teammates during a penalty corner play against Gordon College on Thursday on the Barry Astroturf Field. The Engineers ultimately won 6-3 over the Fighting Scots.
Jessica Witchley—The Tech 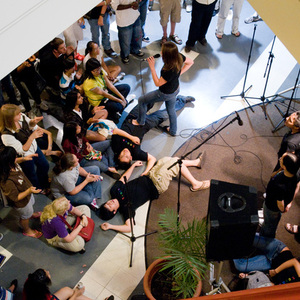 The Wellesley/MIT Toons complete their rendition of “I’ll Make a Man Out of You” from Disney’s Mulan. Various a cappella groups sang throughout the evening at the Tuesday Night Event in the Stratton Student Center, in...
Steve HOwland—The Tech

Twenty-one people participated in an attempt to break the “mattress dominoes” world record. The attempt on Tuesday in Lobby 7 and the Infinite Corridor was organized by Admissions blogger Michael J. Snively ’11. Unfor...
Quentin Smith—The Tech
All Photos From Issue