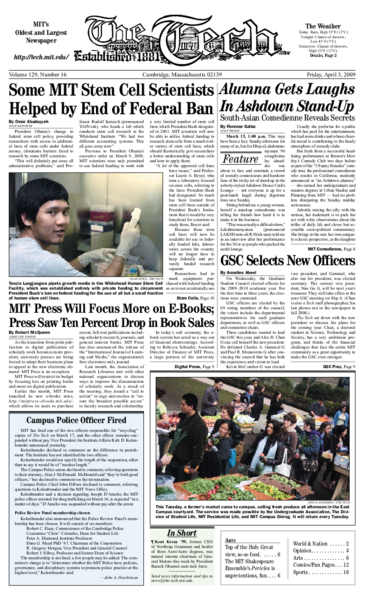 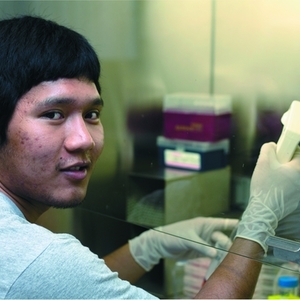 On Wednesday, the Graduate Student Council elected officers for the 2009–2010 academic year. For the first time in three years, the elections were contested.

As the transition from print publication to digital publication of scholarly work becomes more prevalent, university presses are being forced to adapt their business plans to appeal to the new electronic demand: MIT Press is no exception.

MIT has fired one of the two officers responsible for “recycling” copies of <i>The Tech</i> on March 17, and the other officer remains suspended without pay, Vice President for Institute Affairs Kirk D. Kolenbrander announced yesterday. 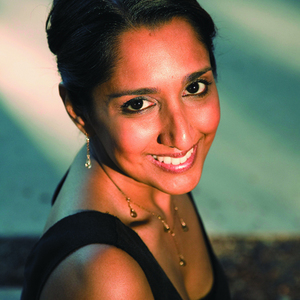 Alumna Gets Laughs In Ashdown Stand-Up

<b>March 15, 1:00 p.m.</b> This may have been a lazy Sunday afternoon for many of us, but for Dhaya Lakshminarayanan ’96 a tough time lay ahead: she was about to face and entertain a crowd of comedy connoisseurs and hardcore fans of the tricky art of stand-up in the soberly-styled Ashdown House Crafts Lounge — not everyone is up for a post-lunch laugh during digestion time on a Sunday.

A once-obscure accounting rule that infuriated banks, who blamed it for worsening the financial crisis, was changed Thursday to give banks more discretion in reporting the value of mortgage securities.

Early Alarm For Church On Abusers in The Clergy

The founder of a Roman Catholic religious order that ran retreat centers for troubled priests warned American bishops in forceful letters dating back to 1952 that pedophiles should be removed from the priesthood because they could not be cured.

Meteorologists have many words for water falling from the sky. The most general term is precipitation, which includes liquid and solid water.

Rod R. Blagojevich, the ousted Democratic governor of Illinois, used his chance to fill the Senate seat vacated by Barack Obama as one more money-making plan in what federal prosecutors described Thursday as “The Blagojevich Enterprise.”

Judge Says Some at Bagram Can Challenge Their Detention

A federal judge ruled Thursday that some prisoners held by the U.S. military in Afghanistan have a right to challenge their imprisonment, dealing a blow to government efforts to detain terrorism suspects for extended periods without court oversight.

Fusion Power Could Be the Answer

Sometimes, it felt like the Bush administration believed blood-letting could purge a man of all evil humors and the universe revolved around the sun. At least government policies supporting scientific research seemed to reflect as much — that we were still stuck in an era where dogma rather than science drove progress.

The Quixotic Search for a Silver Bullet

Take it from a nuclear engineer: there is no future in fusion power. It will never be economical. Even if the very sizable technical hurdles were surmounted — magnetics, plasma physics, materials, and tritium availability to name a few — the capital cost of fusion’s heat island (the reactor sans turbines and other accouterments), would still be 2-3 times greater than that of a fission reactor, on a per-MW basis.

Last Tuesday marked the opening of an on-campus fruit and vegetable stand sponsored by Campus Dining and the UA. The stand will be open every Tuesday, weather permitting, from noon to 6 p.m.

Who <i>hasn’t</i> played Murray Perahia’s March 28th program? Or at least tried; all of the works performed by Murray Perahia on Sunday afternoon’s Celebrity Series concert are somewhere gathering dust on my piano, multiple recordings litter my CD collection. It’s music that we’ve studied to understand what Western music is, music we’ve scrutinized to hear what Western music is supposed to sound like, and perhaps that’s what was so fundamentally difficult about Sunday’s performance. What can there possibly be to say about music that’s been spoken about for so long?

Drama is tough. It takes a lot time, a lot of money, and a lot of otherwise unemployed people willing to sacrifice both soul and social life for the glory of a few good performances. Unlike some of the other arts, which are often solitary, drama is always about other people: the audience, the cast, the director. No production is “pure” in that sense, but rather the amalgam of a host of other people’s opinions and decisions.

Although the three-letter name BoA may not currently strike a chord of familiarity in the US, the R&B pop princess is staking her claims in our neighborhood. The pop star who took Korea by storm and rode on top of the <i>hallyu</i>, the popular culture movement in Korea, recently released her first full-length (and self-titled) English album.

CONCERT REVIEW Moz: ‘To Be Human Is to Be Loved’

Former Smiths frontman Morrissey stopped by Boston on Sunday, March 29th as part of his Tour of Refusal, in support of his latest studio record <i>Years of Refusal</i>. A crowd waited in line hours before doors opened in order to get a great spot at the House of Blues. The general admission floor area filled up quickly with eager fans awaiting a chance to touch the singer himself, as he is known to generously offer his hand to those in the first few rows. 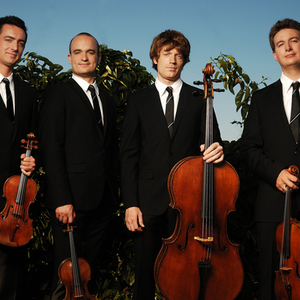 Kicking off this Sunday is the Beeline Festival at the Broad Institute. The festival hopes to introduce MIT and the surrounding community to new and exciting music, as well some exciting culinary treats. Co-coordinators Christine N. Southworth ’01 and MIT professor Evan Ziporyn, both musicians themselves in Gamelan Galak Tika, have organized six outstanding performances every weekend in April. The opening concert this Sunday will feature The Calder Quartet, as well as a reception where guests can taste honey and pastries made by local beekeepers and chefs. After the reception is a second set with Gutbucket.

In many major cities, Restaurant Week serves as an annual or a biannual tradition. Two or three course meals at acclaimed restaurants in the city go for relatively inexpensive prices. I took advantage of this event by taking my girlfriend to the Top of the Hub, located on the 52nd floor of the Prudential Tower.

Even though cricket is played or followed by more than a billion people all over the world, Boston has not seen much of it. Thanks to the MIT Cricket Club, which organized its second cricket tournament at MIT from March 14 to March 29, MIT became center stage for some exciting rounds of cricket. The tournament was the club’s first ever indoor tournament, with matches held in the Johnson Athletic Center. It was sponsored by the Students Activities Office, the Office of the Dean for Graduate Education, and the International Students Organization.

With numerous outstanding performances, MIT men’s swimming and diving capped the 2008-09 season with its highest finish at the NCAA Championships in 27 years. The men finished ninth overall in the team standings, while the women’s team also closed out the year with a pair of solid swims.

The Tech’s Athlete of the Week: Julia Zimmerman ’09

In a magnificent ending to a remarkable collegiate career, senior star gymnast Julia C. Zimmerman ’09 won the all-round competition for the second time in three years at the prestigious National Collegiate Gymnastics Association (NCGA) championship hosted by Hamline University this past weekend. Zimmerman, who also won the crown in 2007, is just the second woman in 25 years to twice win the NCGA all-around title.

Rookie Robin S. Shin ’12 posted five victories en route to a 22nd-place finish in sabre at the NCAA Fencing National Championship held this past weekend at Pennsylvania State University. As a team, MIT tied for 24th place for the second year in a row, this time sharing the ranking with Vassar College. 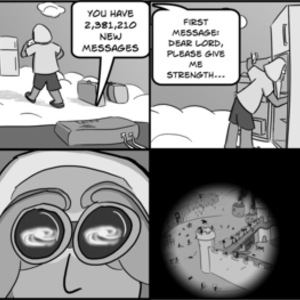 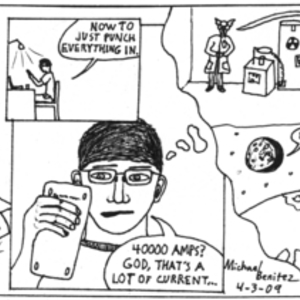 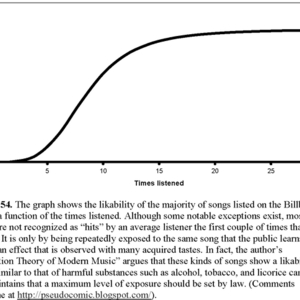 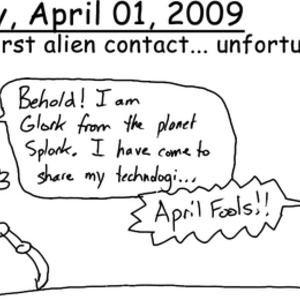 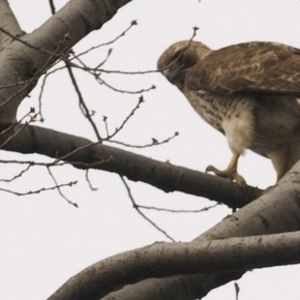 A red-tailed hawk sits in a tree in the courtyard bordered by buildings 35 and 37.
Steve Howland—The Tech 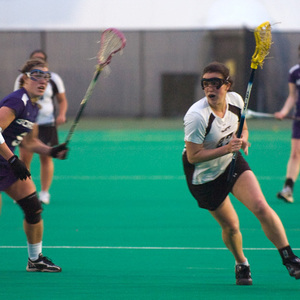 Alexandra Wright ’11 jukes in and out of the opposing defense on her way to the goal at the womens’ lacrosse match versus Gordon College on Thursday. The Engineers won 18-9.
Vibin Kundukulam—The Tech

Tenzin Lungjangwa pipets growth media in the Whitehead Human Stem Cell Facility, which was established entirely with private funding to circumvent President Bush’s ban on federal funding for the use of all but a small...
Noah Spies—The Tech 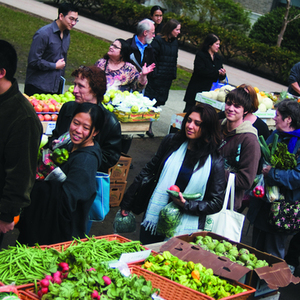 This Tuesday, a farmer’s market came to campus, selling fresh produce all afternoon in the East Campus courtyard. The service was made possible by the Undergraduate Association, The Division of Student Life, MIT Resid...
Eric D. Schmiedl—The Tech
All Photos From Issue