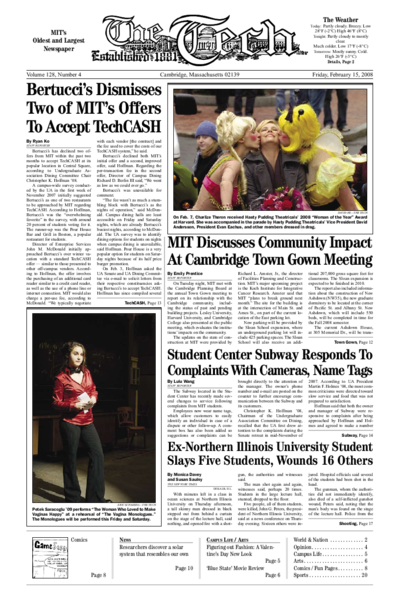 On Tuesday night, MIT met with the Cambridge Planning Board at the annual Town Gown meeting to report on its relationship with the Cambridge community, including the status of past and pending building projects. Lesley University, Harvard University, and Cambridge College also presented at the public meeting, which evaluates the institutions’ impacts on the community.

The Subway located in the Student Center has recently made several changes to service following complaints from MIT students.

Astronomers said Wednesday that they had found a miniature version of our own solar system 5,000 light years across the galaxy — the first planetary system that really looks like our own, with outer giant planets and room for smaller inner planets.

Bertucci’s has declined two offers from MIT within the past two months to accept TechCASH at its popular location in Central Square, according to Undergraduate Association Dining Committee Chair Christopher K. Hoffman ’08.

With minutes left in a class in ocean sciences at Northern Illinois University on Thursday afternoon, a tall skinny man dressed in black stepped out from behind a curtain on the stage of the lecture hall, said nothing, and opened fire with a shotgun, the authorities and witnesses said.

As computers and models become more sophisticated, weather forecasting is growing increasingly independent of humans. Even the text of this analysis could eventually be produced by a computer. What then is the contribution of humans in the process of weather forecasting? If the contribution is merely communicating the forecast, then meteorology as a physical science is only important in providing the tools to improve models. People are not usually interested in the physical consistency of their forecasts, rather, they are interested in the forecasts themselves and their accuracy. Once a model is capable of producing a forecast, the communication of the forecast to the public proceeds independently from the physical principles on which the forecast was based.

Black Leader Pulls His Support From Clinton, Shifts to Obama

Rep. John Lewis, an elder statesman from the civil rights era and one of Sen. Hillary Rodham Clinton’s most prominent black supporters, said on Thursday night that he planned to cast his vote as a superdelegate for Sen. Barack Obama in hopes of preventing a fight at the Democratic convention.

On the eve of a planned trip to Africa, President Bush thrust himself into the role of peacemaker on Thursday, as his plans to promote American efforts against poverty and disease gave way to a more pressing imperative: addressing the violence and turmoil on the continent.

The Bush administration has agreed to turn over to international inspectors intelligence data it has collected that it says proves Iran worked on developing a nuclear weapon until a little more than four years ago, according to American and foreign diplomats.

Kenyans Split on Ethnic Lines Even Though Violence Declining

Sarah Wangoi has spent her entire life — all 70 years of it — in the Rift Valley. But last month, she was chased off her farm by a mob that called her a foreigner. She now sleeps on the cold floor of a stranger’s house, seeking refuge in an area of Kenya where her ethnic group, the Kikuyu, is strong. It is, supposedly, her homeland.

Faulty Satellite Will Be Target In Shoot-Down by the U.S. Military

The military will try to shoot down a crippled spy satellite in the next two weeks, senior officials said Thursday. The officials laid out a high-tech plan to intercept the satellite over the Pacific just before it tumbles uncontrollably to earth carrying toxic fuel.

With the credit markets once again deteriorating, the nation’s two top economic policymakers acknowledged Thursday that the outlook for the economy had worsened, as both came under criticism for being overtaken by events and failing to act boldly enough.

Accusing Israel of killing one of his top commanders, Hassan Nasrallah, the leader of Hezbollah, threatened Thursday to intensify his group’s conflict with Israel and to retaliate against Israeli targets anywhere in the world.

Earlier tonight, seated at The Orpheum, I couldn’t help but think of an old Toothpaste for Dinner comic. This particular installment of the Web series featured the author sitting at a desk writing a letter, which read: “Dear Chan Marshall of Cat Power, SHUT UP. Love, Drew.”

These days, even when its subject is abortion, it’s hard for a film to be genuinely affecting, or even feel new. But Cristian Mungiu’s astonishing “4 Months, 3 Weeks, and 2 Days” insists on confronting abortion with a kind of honesty and force that will leave even the most hardened viewer a little dazed. And yet it would be too easy, and unfair, to label 4 months as simply an “abortion movie”; it would have been easy (and probably even successful) for Mungiu to construct the kind of gritty, mildly simplistic abortion movie most of us expect. But 4 months extends itself beyond any of these expectations and attempts something much more ambitious: to represent a harrowing day in the life of a Romanian college student in a way shatters the separation between film and viewer, and provides us with life, in its truest sense. It succeeds and it feels very, very new.

BOOK REVIEW The Error of Our Ways

Does anyone believe that humans are rational? Or are we nothing more than victims of our impulses and emotions, careening randomly from one bad decision to the next like a drunken rodents? In a loosely strung collection of simple experiments, Sloan Professor Dan Ariely argues in “Predictably Irrational” that we behave in ways that fall short of rational, but are highly systematic.

Marshall Lewy’s “Blue State” is a romantic comedy that misses the mark completely. It is neither romantic nor funny and features a horrible premise. Here are some of the film’s major flaws:

Spurs, Suns Striving for Supremacy Amid Struggle Atop Western Conference

The NBA’s Western Conference is having one of its most competitive seasons in recent years. Don’t believe me? Just look at the frequency of lead changes in the standings or the constant jostling for position in various power rankings across the press. The term “wild, wild west” has never been more applicable, but let’s try to make the picture a little clearer.

The MIT Figure Skating Club team tied for sixth place with Pennsylvania State University at the Boston University Eastern Intercollegiate Figure Skating Competition, held on Feb. 9-10 at the Walter Brown Arena. MIT finished with 13 points, with several skaters finishing in the top five in free skate and solo dance events to contribute to the point total.

In a battle for supremacy in the NorthEast Collegiate Hockey Association Conference A East Division, MIT’s freshmen contingent proved to be the difference, as the men’s ice hockey team slipped past Endicott College 2-1 on Saturday night. Defenseman Nicholas D. Sisler ’11 assisted on the game-tying goal before fellow freshman Cory F. Phinney ’11 netted the winner, while rookie goaltender Stephen L. Yablonski ’11 stopped 26 shots to earn the victory.

It’s Valentine’s Day! People are in love, chocolate boxes line the streets, and all you see is pink and red (not that we’re complaining). Yet, it isn’t all fun and games. For many of us not so caught up in the rush, this is a dreaded time filled with forced reflection on both single-hood and the dreary rut of longtime couple-dom. So how can we here at Figuring out Fashion be of any help? Well, there’s really only one way to cure the V-day blues — a makeover! After doing some exploring, we came up with an affordable plan to reinvent your look and spirit this weekend.

1. Take It Like A Man, “Dragonette (Felix Cartal remix)” 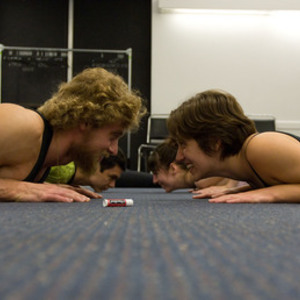 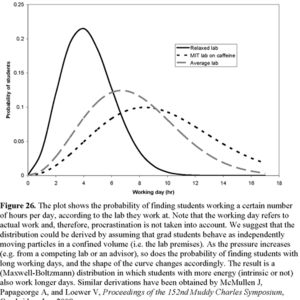 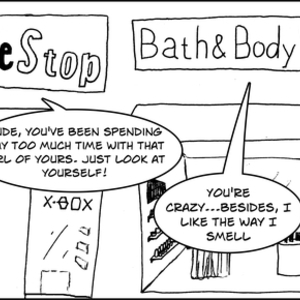 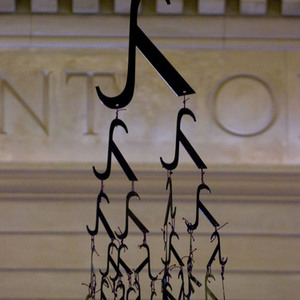 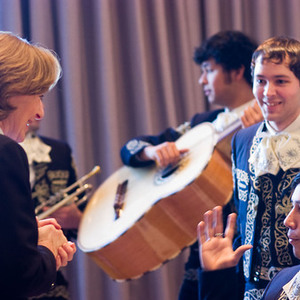 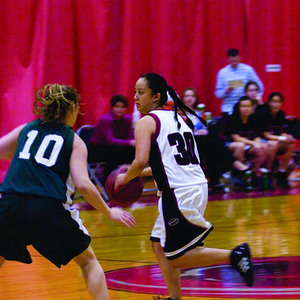 Guard Kimberly E. Soo Hoo ’08 takes the ball down the court against Jill Walsh of Babson College on Senior Night last Wednesday, the final home game of her career. The Engineers jumped out to a large lead early and he...
Jessica Witchley—The Tech 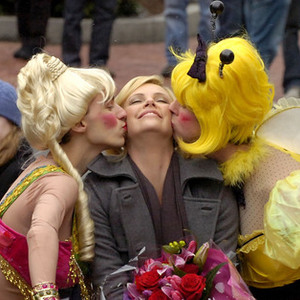 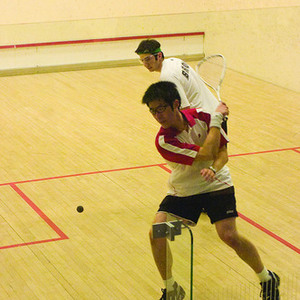 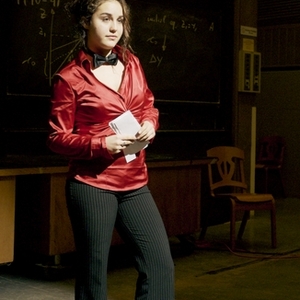 Petek Saracoglu ’09 performs “The Woman Who Loved to Make Vaginas Happy” at a rehearsal of “The Vagina Monologues.” The Monologues will be performed this Friday and Saturday.
Eric Schmiedl—The Tech 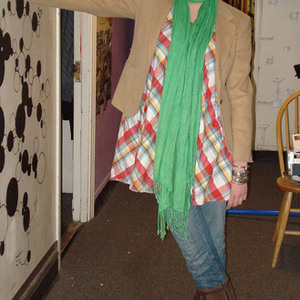