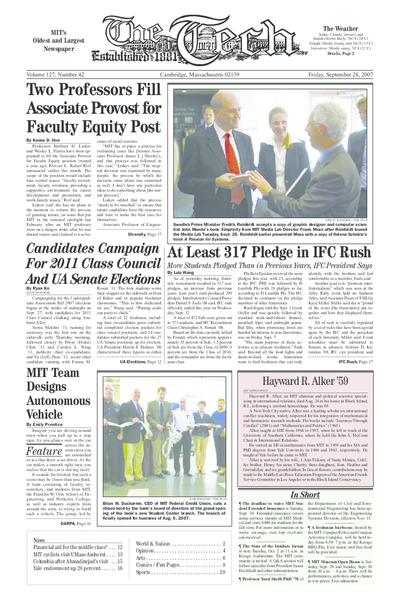 Hayward R. Alker, an MIT alumnus and political scientist specializing in international relations, died Aug. 24 at his home in Block Island, R.I., following a cerebral hemorrhage. He was 69.

The deadline to waive MIT Student Extended Insurance is Sunday, Sept. 30. Extended insurance covers some services outside of MIT Medical and costs $600 for students for the fall term. For more information or to waive coverage, visit http://web.mit.edu/medical/.

Imagine you are driving around town when you pull up to a stop sign. As you glance over at the car across the intersection, you are astonished to see that there is no driver. As the car makes a smooth right turn, you realize that the car is driving itself.

Some of the nation’s most elite colleges, trying to ward off perceptions that they’ve become unaffordable to even high-income families, are bolstering their financial aid packages by offering grants to students whose parents earn as much as $180,000 a year.

Professors Barbara H. Liskov and Wesley L. Harris have been appointed to fill the Associate Provost for Faculty Equity position created a year ago, Provost L. Rafael Reif announced earlier this month. The scope of the position would include four central issues: “faculty recruitment, faculty retention, providing a supportive environment for career development and promotion, and work-family issues,” Reif said.

At Least 317 Pledge in IFC Rush

Before Iran’s president took the stage at Columbia University on Monday, the university’s president, Lee C. Bollinger, sent out an early-morning e-mail message, calling on students and faculty “to live up to the best of Columbia’s traditions.” Yesterday, many critics questioned whether Mr. Bollinger had met that test himself.

The Yale Endowment, which has led the academic world in investment performance over the last decade, posted a 28 percent return Wednesday for the fiscal year ended June 30, bringing its total value to $22.5 billion.

Campaigning for the Undergraduate Association Fall 2007 elections began at the stroke of midnight on Sept. 27, with candidates for 2011 Class Council chalking along Amherst Alley.

Summer has come and gone as of last Sunday morning at 5:51 EST, but try telling that to the weather! We have been in an unusual high pressure pattern lately, which has allowed temperatures this week to soar and cut down precipitation to just 35 percent of normal since Aug. 1. Logan’s high of 88°F on Tuesday nearly tied the record high of 89°F for the same date in 1926. Again on Wednesday and Thursday, highs of 93°F and 85°F were only two degrees and one degree off from tying records, respectively. Thankfully, the muggy and rainy conditions today will usher in much drier and cooler air for the weekend.

Amid renewed questions by many states about the future of lethal injection in capital punishment, Alabama ordered a rare stay in an execution that had been scheduled for Thursday night.

With New Test, U.S. Citizenship Is Still a Question of Answers

Patrick Henry and Francis Scott Key are out, but Susan B. Anthony and Nancy Pelosi are in. The White House was cut, but New York and Sept. 11 made the list.

Blackwater Role in Shooting Said To Include Chaos, Civilian Deaths

Participants in a contentious Baghdad security operation this month have told U.S. investigators that during the operation at least one guard continued firing on civilians while colleagues urgently called for a cease-fire.

An Army sniper is taught to kill people “calmly and deliberately,” even when they pose no immediate danger to him. “A sniper,” Army Field Manual 23-10 goes on to state, “must not be susceptible to emotions such as anxiety or remorse.”

Sales of new homes plunged in August to their slowest pace in more than seven years as tighter credit and rising inventories continued to weigh down the housing industry. The grim statistics could foreshadow further economic weakness in the fourth quarter, analysts said.

The Senate voted on Thursday to widen federal jurisdiction over hate crimes and to extend protections to people victimized because of sexual orientation, disability, gender or gender identity.

Brutality and defiance marked the second day of an armed crackdown in Myanmar on Thursday as the military junta tried to crush a wave of nationwide protests in the face of harsh international condemnation.

The issue of intent is at the core of the Boston Police Department’s latest encounter with LED devices. Initial news reports depicted a student deliberately provoking airport security, and newspaper stories throughout the day continued to blare “fake bomb” and “hoax device” in three-inch headlines, even after this narrative was clearly contradicted by the facts. The fact that these organizations value marketability over truth is regrettable but not easily changed.

Where Is the Leadership?

For a university that claims to be at the intellectual forefront of the world, for a powerhouse that claims to churn out global leaders, MIT has been pathetically represented and outright lambasted by the national media over the last couple of weeks. We have been portrayed as deceptively ignorant (or ignorantly deceptive) in a study uncovering our ridiculous SAT accounting measures (check<i> The Wall Street Journal</i>, Sept. 22), as stereotypically foolish by airport security (check any media outlet near you, Sept. 21), and miserably irresponsible by a mother grieving for her lost son (<i>The Wall Street Journal</i>, Sept. 10).

Last week, the Cambridge University American Stage Tour returned to MIT to perform William Shakespeare’s <i>The Winter’s Tale</i>. CAST, comprised of Cambridge University students, tour the east coast of the United States during the month of September, performing a work of Shakespeare at a school, charity, community theater, and various universities. In addition, CAST holds workshops over the course of their trip. This year, CAST performed at MIT for three nights in Kresge Little Theatre.

The Foo Fighters are back with quite an interesting new album that will most likely cause mixed feelings throughout their rather broad fan base.

I like coffee. A lot. It’s great. Now that the year’s started, I seem to be drinking a lot more of it. More than I have over the last two weeks, anyway. Based on what I have written so far, you might think this an article about coffee. Hell no. It’s an album review.

The Best Shows of October 2007

You’ve made it through your first exams, enjoyed the year’s first Suicide Prevention Day, and tooled to your heart’s content — or at least tooled to your professor’s heart’s content. But something’s missing. You crave a break from the weird and angular buildings that grace Massachusetts Ave. and its surrounding areas. You seek reprieve from the barely audible but somehow grating hum of your forever-in-use laptop. You desire dark venues with flashing lights and attractive strangers who share your tastes in music. Well, kiddo, I’ve got your prescription — get out of your dormitory and see some live music this October! Your brain will thank you for the break.

The MIT men’s water polo team, ranked fifth nationally in Division III, used a balanced offensive attack to earn a pair of victories against Connecticut College and Penn State-Behrend on Sunday afternoon in New London, Conn. The Engineers downed the Camels, 21-11, before returning to the pool almost immediately to defeat the Lions, 15-6.

The MIT women’s volleyball team won its home tournament for the third consecutive year, defeating Tufts University in the championship match by a score of 30-25, 30-18, 30-20. Along the way, Tech (14-1) also bested Bowdoin and Wesleyan in pool play and Williams in the semifinals during last Friday and Saturday’s MIT Women’s Volleyball Invitational, held in Rockwell Cage.

The MIT men’s golf team posted a Saturday team score of 330 and two-day team total of 668 — the lowest respective scores earned by the Engineers in nearly two years — in this past weekend’s Dartmouth Invitational at Hanover Country Club. Despite turning in its best outing of the season, the team placed eighth out of nine schools in competition against a field of seven Division I opponents.

Two weeks after the Bill Belichick spying debacle, in which league officials caught Patriots video assistant Matthew Estrella filming Jets defensive signals, the New England Patriots’ record stands at 3-0. When the Pats destroyed the New York Jets 38-14 on Sept. 9 in their season-opener, no one thought that the focus of the game would be a video camera instead of the superior New England offense. When the National Football League released schedules, the San Francisco Chargers-Pats game promised to be one of the premier American Football Conference matchups; instead, it was another 38-14 blowout. This past Sunday, the Patriots were favored by 16.5 points against the Buffalo Bills; the final score of 38-7 actually eclipsed the already-outlandish line. 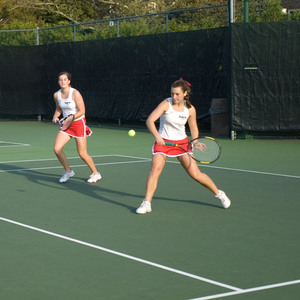 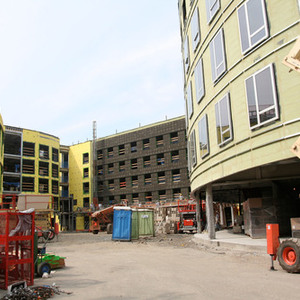 The construction of the NW35, the new Ashdown House, on the northwest side of campus continues. If all goes according to plan, the first residents will be admitted in the summer or fall of 2008.
Alex H. Chan—The Tech 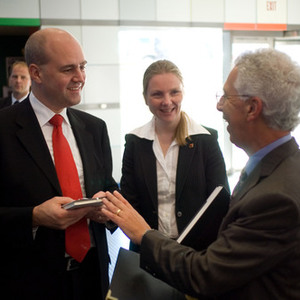 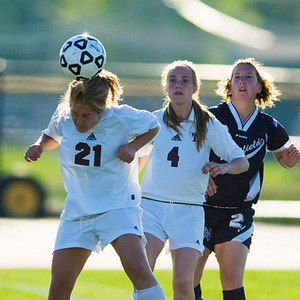 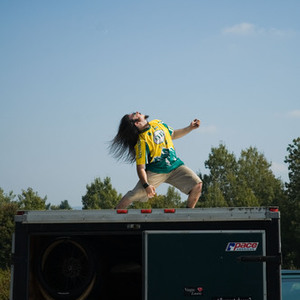 A student from the University of Vermont rocks out on top of a bike trailer during races on the University of Massachusetts-Amherst campus. The UMass cycling team hosted the races this past Saturday, Sept. 22.
Omari Stephens—The Tech 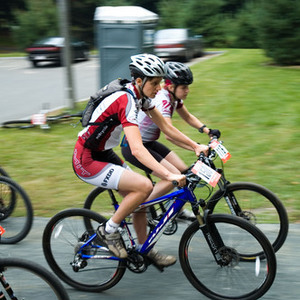 Lisa F. Marshall G takes the hole shot at the start of the Women’s B category race. University of Massachusetts-Amherst held the series of races on their campus last Saturday, Sept. 22.
Omari Stephens—The Tech 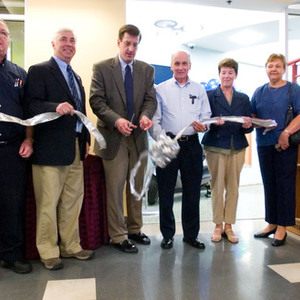 Brian W. Ducharme, CEO of MIT Federal Credit Union, cuts a ribbon held by the bank’s board of directors at the grand opening of the bank’s new Student Center branch. The branch officially opened for business of Aug. 6...
Kari Williams—The Tech
All Photos From Issue