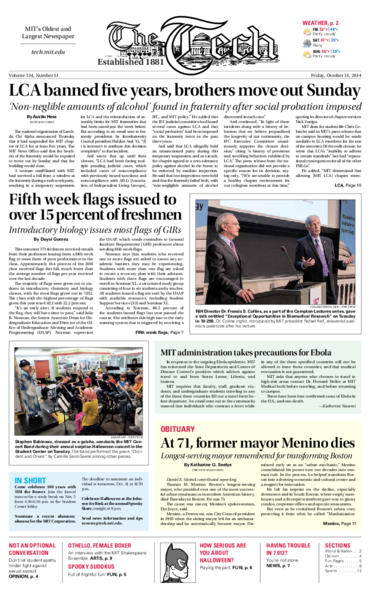 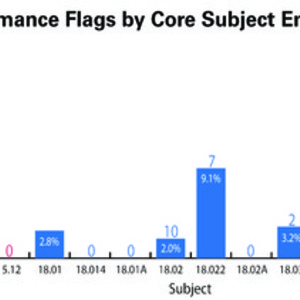 Fifth week flags issued to over 15 percent of freshmen

This semester 171 freshmen received emails from their professors issuing them a fifth week flag to warn them of poor performance in the class. Approximately 16.4 percent of the 2018 class received flags this fall, much lower than the average number of flags per year received over the last decade.

In response to the ongoing Ebola epidemic, MIT has reiterated the State Department and Center of Disease Control’s position which advises against travel to and from Sierra Leone, Liberia, and Guinea.

The national organization of Lambda Chi Alpha announced Thursday that it had suspended the MIT chapter of LCA for at least five years. The MIT News Office said that the brothers of the fraternity would be required to move out by Sunday and that the building would close.

WASHINGTON — Modern political campaigns home in on their key voters with drone-like precision, down to the smallest niche — like Prius-driving single women in Northern Virginia who care about energy issues. They compile hundreds of pieces of data on individuals, from party registration to pet ownership to favorite TV shows. And they can reach people through Facebook, Pandora, Twitter, YouTube or cable television.

A cold and rainy weekend is in store for the Boston/Cambridge area as a low pressure system rides Northward just off the coast. On Saturday and Sunday, temperatures will likely top out in the mid 40s (°F) and will likely drop below freezing on Sunday night. There is a very good chance of rain on Saturday, with up to half an inch possible, depending on the path the off-shore storm takes.

JERUSALEM — The Swedish government on Thursday officially recognized the state of Palestine, as the new prime minister, Stefan Lofven, ignored Israeli protests and followed through on a pledge he made at his inauguration this month.

OUAGADOUGOU, Burkina Faso — Demonstrators surged through the dusty streets of Ouagadougou, the capital of Burkina Faso, on Thursday, overrunning state broadcasters, setting fire to the Parliament building and torching the homes of relatives of President Blaise Compaoré in a swelling of protest against his plans to extend his 27 years in office.

BRUSSELS — Russian and Ukrainian officials reached an agreement Thursday to resume Russian deliveries of natural gas to prevent shortages during the winter months, which require large amounts of energy for heating.

Unlike the seventh game of the World Series, the debate over the economy’s strength sometimes seems like a playoff competition between skeptics and believers. But on Thursday, the boosters won at least a temporary victory with a government report that estimated the nation’s economic output rose at a healthy 3.5 percent annual rate in the third quarter.

SEOUL, South Korea — For U.S. health officials fretting over states going their own way on Ebola quarantines, consider this: North Korea, which in the best of times allows a limited number of people in or out, is rattled enough about the virus that it reportedly will quarantine anyone coming into the country from anywhere.

BEIJING — The announcement by administrators of the SAT college entrance test that scores are being withheld for students from China and South Korea who took the exam this month has infuriated many and raised anxiety about what for a number of them is a high-stakes college application process.

On Monday, MIT released detailed results of a survey designed to investigate the scope and nature of sexual misconduct in our community. The survey is a rare quantitative examination of sexual assault at colleges — in several ways the first of its kind among MIT’s peer institutions — and is a true example of bold leadership by the MIT administration and chancellor. And the data and resulting action plan were released with public honesty in a time when many colleges across the country seem to be primarily trying to avoid the issue.

Since its premiere over 400 years ago, the timeless story of Othello has seen many interpretations. MIT’s Shakespeare Ensemble presents the title character as a female boxer, an exciting twist on the tale of intrigue and betrayal. The Tech interviewed director Susanna Noon and lead actress Samantha Harper ’16 to learn about their vision for the play and the challenges they faced behind the scenes.

MIT shuts out Emerson College by a score of 3-0 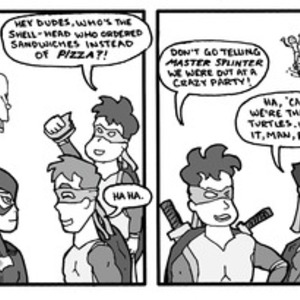 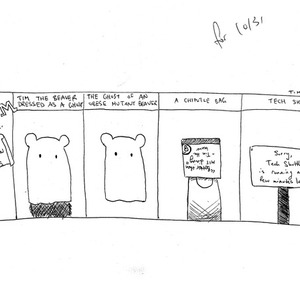 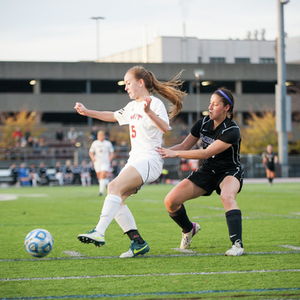 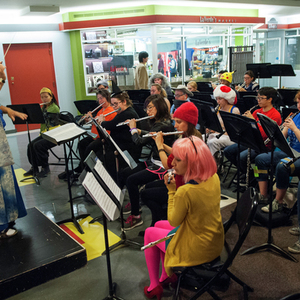 Stephen Babineau, dressed as a geisha, conducts the MIT Concert Band during their annual surprise Halloween concert in the Student Center on Tuesday. The band performed the piece “Occident and Orient” by Camille Saint...
Sarah Liu—The Tech 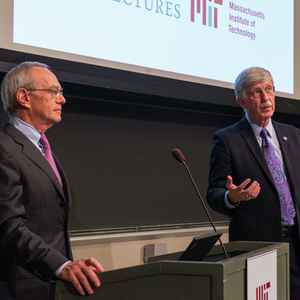