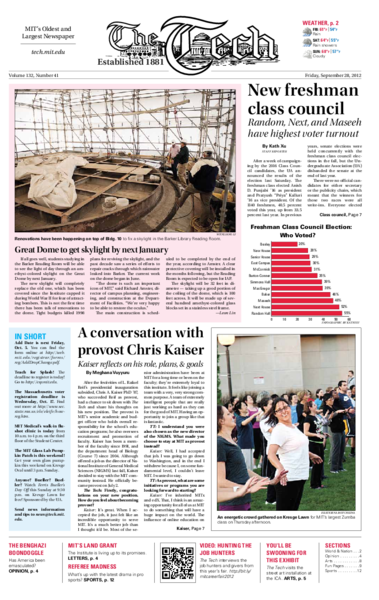 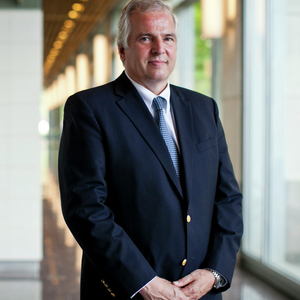 A conversation with provost Chris Kaiser

After the festivities of L. Rafael Reif’s presidential inauguration subsided, Chris A. Kaiser PhD ’87, who succeeded Reif as provost, had a chance to sit down with The Tech and share his thoughts on his new position. The provost is MIT’s senior academic and budget officer who holds overall responsibility for the school’s education programs; he also oversees recruitment and promotion of faculty. Kaiser has been a member of the faculty since 1991, and the department head of Biology (Course 7) since 2004. Although offered a job as the director of National Institute of General Medical Sciences (NIGMS) last fall, Kaiser decided to stay with the MIT community instead. He officially became provost on July 2. 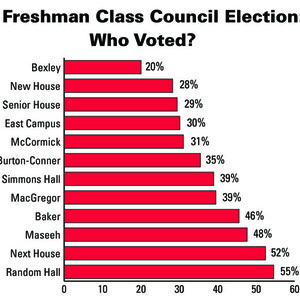 After a week of campaigning by the 2016 Class Council candidates, the UA announced the results of the election last Saturday. The freshman class elected Anish D. Punjabi ’16 as president and Pratyush “Priya” Kalluri ’16 as vice president. Of the 1140 freshmen, 40.5 percent voted this year, up from 33.5 percent last year. In previous years, senate elections were held concurrently with the freshman class council elections in the fall, but the Undergraduate Association (UA) disbanded the senate at the end of last year.

Add Date is next Friday, Oct. 5. You can find the form online at http://web.mit.edu/registrar/forms/reg/AddDropChange.pdf. 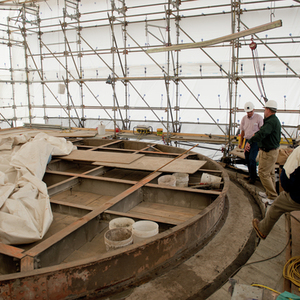 Great Dome to get skylight by next January

If all goes well, students studying in the Barker Reading Room will be able to see the light of day through an amethyst-colored skylight on the Great Dome by next January.

KAMPALA, Uganda — The presidents of Sudan and South Sudan signed a long-awaited cooperation agreement on Thursday, paving the way for the resumption of oil exports and casting their ailing economies a desperately needed lifeline. But several analysts said the deal came up far short.

NEW YORK — Iranian exiles and the Iranian government can make for a combustible combination, as a spokesman for the Iranian Foreign Ministry discovered after an address by the country’s president to the United Nations during this week’s General Assembly.

Reversing course, Soros to give to a pro-Obama ‘super PAC’

Billionaire George Soros is committing $1 million to Priorities USA Action, the “super PAC” supporting President Barack Obama, two people with knowledge of the matter said Thursday, a significant donation that could help spur further contributions to the group in the closing weeks of the election campaign.

PARIS — The outlook for the eurozone remained unsettled Thursday, as data showed that confidence among European businesses and consumers continued to fall in September and the Spanish government prepared to unveil a plan to restore its finances next year.

As a low pressure system moves over the region, Cambridge will experience damp, cloudy conditions with intermittent precipitation. Temperatures will remain seasonable, with highs in the 60°s for the next several days.

LOS ANGELES — The man thought to have been behind the crude anti-Islam video that set off deadly protests across the Muslim world in recent weeks was arrested Thursday for violating terms of his probation in a 2010 bank fraud case.

An uneven economic year yielded uneven results for the largest university endowments, with reports released through Thursday revealing a range of results, from a fractional loss on investments for Harvard to a healthy gain for MIT.

The MIT Athletics Department runs a year-round soccer intramural program where MIT clubs, societies, and dorms register teams to compete against each other in different tournaments. While this arrangement is, in theory, intended to bolster community ties and act as a sanctuary from the rigors of academic life at MIT, its blatant mismanagement means the benefits of intramurals remain largely unrealized.

An infographic accompanying Tuesday’s article about the Advanced Standing Exams mislabeled the 8.02 bar with “8.01.”

It is the morning of September 11, 2012. Things seem to be looking up for President Obama — a slew of polls has come out showing that the President maintains a lead in a handful of swing states he will need to win come November. Today is the 11th anniversary of the 9/11 attacks, and to commemorate this solemn occasion President Obama is heading off to Las Vegas for a ritzy fundraiser. Of course with the good domestic news on his mind the President doesn’t attend his daily intelligence briefing — this will be the sixth straight day that he has not been personally briefed. That can, of course, come later. Osama Bin Laden is dead after all, what could possibly go wrong, especially on 9/11? Since his inauguration, the president has attended the Presidential Daily Brief approximately 44 percent of the time, even less in the last year and a half.

MIT is more than living up to its land grant commitment

Art, and the age of man

If you have not yet been to Boston’s Institute of Contemporary Art, now is the time to go. Thanks to street artist Swoon (Caledonia Curry), the ICA, or at least part of it, is temporarily festive. Swoon installed Anthropocene Extinction in its lobby just over a year ago, and the effect is still as refreshing as ever.

Picture this: it’s your third day working at a local coffee shop, and a customer comes in and orders a latte macchiato. Being an inexperienced barista, you accidentally hand them a caffé macchiato, and they go off on a 10-minute rant about how you’ve ruined their entire calendar year, how people like you are what is wrong with America, and how only provincial, inbred, degenerates don’t know the difference between a latte macchiato and a caffé macchiato.

Chris A. Kaiser PhD ’87, former head of the Department of Biology, assumed the role of provost on July 2.
DOMINICK REUTER

Renovations have been happening on top of Bldg. 10 to fix a skylight in the Barker Library Reading Room.
Wenliang Li 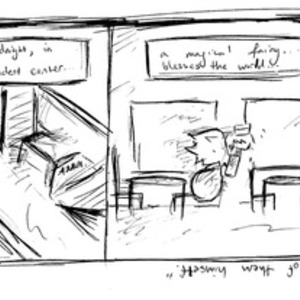 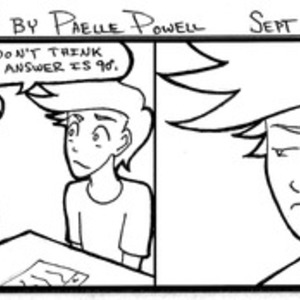 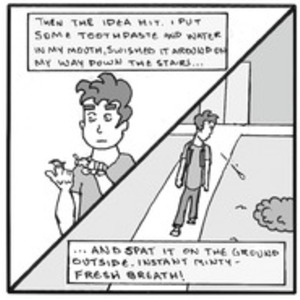 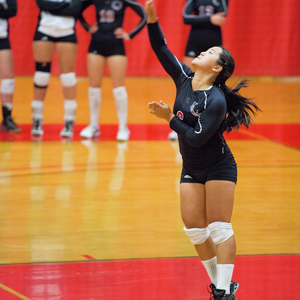 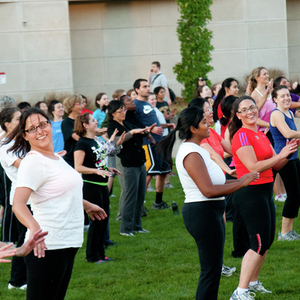