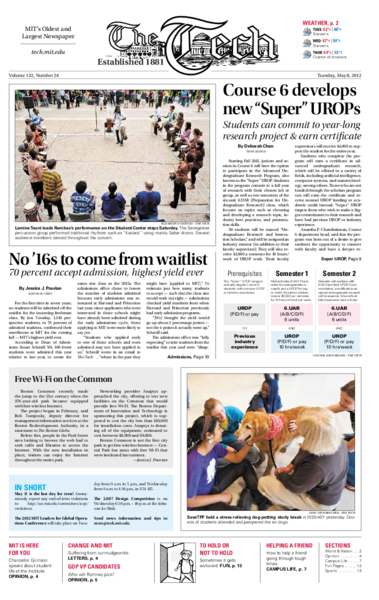 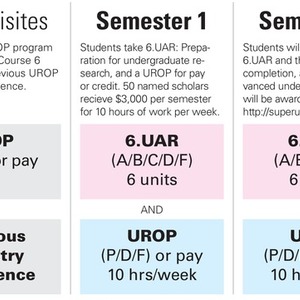 Starting Fall 2012, juniors and seniors in Course 6 will have the option to participate in the Advanced Undergraduate Research Program, also known as the “Super” UROP. Students in the program commit to a full year of research with their chosen lab or group, as well as two semesters of the six-unit 6.UAR (Preparation for Undergraduate Research) class, which focuses on topics such as choosing and developing a research topic, industry best practices, and presentation skills.

The Tech’s news digest for May 8

The Tech’s new biweekly digest is the best way to hear news from around campus fast! Take five minutes to listen to the latest happenings at MIT and in the community.

May 11 is the last day for tests! Anonymously report any end-of-term violations to http://ua.mit.edu/committees/scep/violations.

An opinion piece published on May 4 claimed that the national debt almost tripled in three years after Obama took office. It actually went up by 33 percent.

No ’16s to come from waitlist

For the first time in seven years, no students will be admitted off the waitlist for the incoming freshman class. By last Tuesday, 1,130 prospective students, or 70 percent of admitted students, confirmed their enrollment at MIT for the coming fall — MIT’s highest yield ever.

Free Wi-Fi on the Common

Boston Common recently made the jump to the 21st century when the 378-year-old park became equipped with free wireless Internet.

ATHENS, Greece — A day after Greece’s two dominant parties collapsed at the polls, the leader of the center-right New Democracy party announced Monday that he had failed to form a governing coalition, pushing the mandate to the second party amid growing uncertainty about Greece’s political stability and staying power inside the eurozone.

JERUSALEM — Israel’s Supreme Court on Monday rejected appeals for the release of two Palestinian prisoners who have been on a hunger strike for 69 days to protest their incarceration without formal charges, sharpening concern for their lives and raising the specter of widespread unrest in the event of a death.

MADRID — Rodrigo Rato, executive chairman of Bankia, Spain’s largest real estate lender, resigned Monday before an anticipated government recapitalization of the company, which is sitting on 32 billion euros, or $42 billion, in troubled assets.

Changes in Paris may better fit economic conditions in the US

WASHINGTON — With the victory of the Socialist candidate, Francois Hollande, in the French presidential election, the White House has lost one of its closest allies on the Continent, but perhaps gained one with economic policy beliefs more closely aligned with its own.

Amid protests, Vladimir Putin returns to presidency in Russia

MOSCOW — In the lustrous, vaulted throne room of the czars who came before him, Vladimir Putin on Monday reclaimed the Russian presidency. A 30-gun salute cracked over the eerie quiet of the city, and Russia’s defense minister returned to Putin the black suitcase that contains the controls to a vast nuclear arsenal.

Europe focuses on growth, but is divided on path ahead

BERLIN — In the volatile aftermath of raucous elections, which nearly destroyed the political establishment in Greece and ended 17 years of conservative reign in France, the emphasis across Europe, even in the austerity heartland of Germany, has shifted to the very real problem of growth for the stagnant Continent.

WASHINGTON — With a polarized Congress already on the defensive, President Barack Obama on Tuesday will outline a five-point “to do” list for lawmakers that packages job creation and mortgage relief ideas he has proposed before, administration officials say.

Unsettled weather moving into the region

An area of high pressure sitting just off Cape Cod last night will drift away today. Rainy conditions from an approaching low pressure system will move in from the West, bringing an end to the sunny weather of the past two days. The rain, however, will stick around for a while, perhaps until Friday as the associated warm and cold fronts stall over the area by mid-week.

In the May 1, 2012 issue of The Tech, Barun Singh provides an opinion piece in which he strongly criticizes the administration and the Corporation of the Institute for what he perceives as a series of failures and mismanagement. I am concerned that students reading the op-ed will get the harmful impression that support is lacking at MIT, precisely when we are making a concerted effort to increase awareness of the broad network of support available to students. Moreover, as MIT enters finals period, it would be a tragedy if this misperception prevented anyone from seeking help during these stressful weeks, so I want to correct any misimpressions: if you are feeling overwhelmed or isolated, MIT has resources throughout the community for you.

My wife tells me from time to time that I am something of a curmudgeon; she may be right. I do not think that has always been true, but of late I do find myself with less patience than I once had. I was reminded of the deficit when reading Barun Singh’s article in Tuesday’s The Tech. In his time at MIT, Barun has generally been a class act so it was with a bit of sadness that I note he has been infected with curmudgeonitis. When this malady shows itself in one so youthful, I recommend immediate therapy.

I do not believe that Putin — and even the Kremlin before him, and after him (under Medvedev) — is scared in the least, even by the rarely seen large-scale protests of recent months.

As the fierce battles of the presidential primaries fade into history, the attentions of politicos turn to three questions: Who will win the 2012 presidential race? What electoral strategies will be employed? And who will Mitt Romney pick for his running mate? 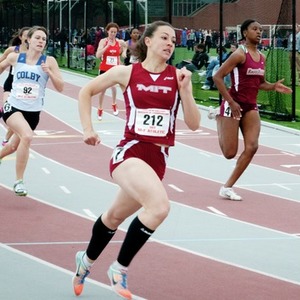 The triathlon club had an impressive turn out at their annual Iron Nerd race. The team holds the race each year to help promote a healthy and active lifestyle at MIT. The race also serves as a recruiting event for the MIT team. Seventy-seven undergraduates, graduates, and MIT affiliates registered for the race this year.

Although the Bulls dominated the majority of the Game 1 matchup, the victory may have come at too steep a price. Coach Tom Thibodeau’s controversial decision to leave his starters in the game with one minute left with his team up 12 proved costly as superstar point guard Derrick Rose’s season-ending ACL tear may jeopardize the high expectations Chicago had coming into the playoffs. Philadelphia guard Evan Turner infamously tweeted last week that “the heat are a tougher team for us to match up against,” which has elicited much criticism over the past week. There may be some truth to that statement, however. The 76ers have matched up very well with Chicago over the past two seasons, even with Derrick Rose in the lineup. The two teams have great benches, with the 76ers’ second unit scoring 40.8 PPG (fourth in the NBA) and the Bulls featuring Kyle Korver, Omer Asik, Taj Gibson and C.J. Watson. Chicago and Philadelphia also pride themselves on playing stellar defense and are first and third, respectively, in the NBA this season in points allowed. This series already had upset potential, but the Sixers were never fully expected to win more than one or two games. Without Derrick Rose, Chicago is still incredibly formidable, but I think Philadelphia may be able to steal a game or two in Chicago, and pull off the upset.

Heat and Spurs expected to take East and West

MIT Women’s Openweight Crew had its top finish in its three years as a member of the Patriot League at the conference championship regatta last Sunday on the Cooper River in New Jersey. The Engineers placed third in the team standings, behind the U.S. Naval Academy and defending champion Bucknell University, after back-to-back fifth-place finishes in 2010 and 2011.

A friend in need

Over the past month, I’ve written about mental health issues from the perspective of the afflicted. But for every individual who struggles with these issues, there are many more who are affected by association. Friends, partners, and family members end up shouldering some of the burden. 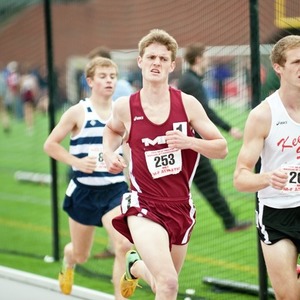 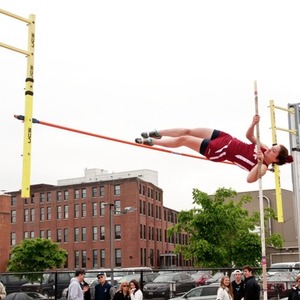 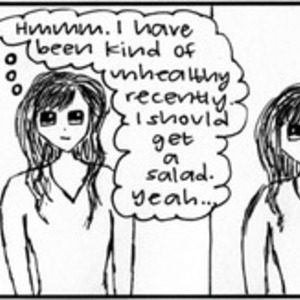 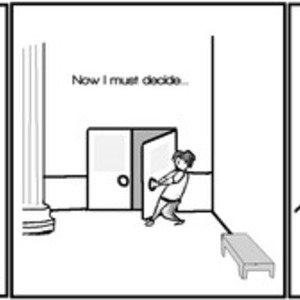 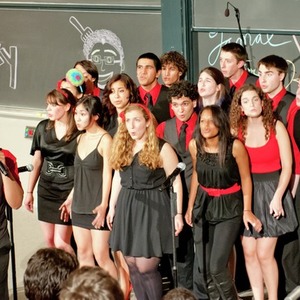 Ricky D. Richardson ’12 sings “Wake Up Everybody,” as performed by John Legend, in the last set of the Chorallaries’ spring concert on Saturday night.
Tami Forrester—The Tech 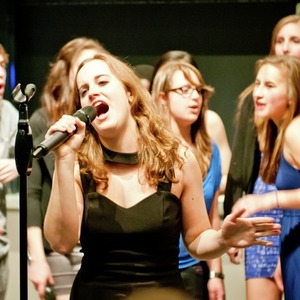 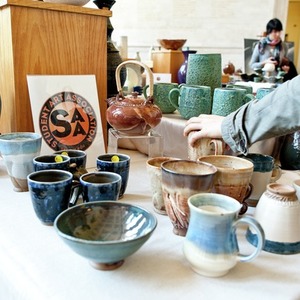 The Student Art Association held its annual Spring Ceramic Sale yesterday in Lobby 10. The sale will continue today from 8 a.m. to 5 p.m. in conjunction with the Glass Lab’s Mother’s Day sale.
Christopher A. Maynor—The Tech 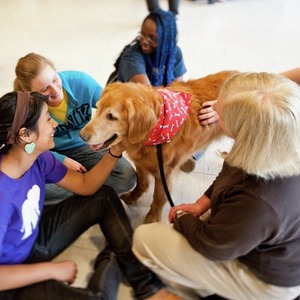 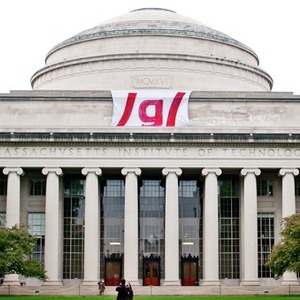 A large “/g/” appeared on the front of the Great Dome Sunday morning, likely a reference to the technology board on 4chan.org.
Alice L. Chen 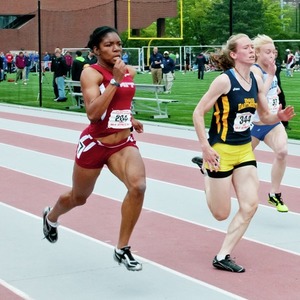 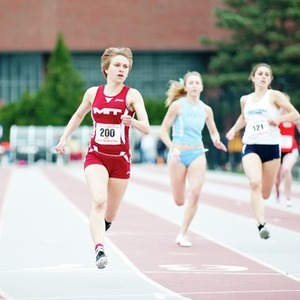 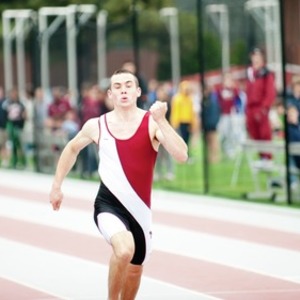 Michael J. DuPlessis ’14 (right) races toward the finish of the 100-meter dash. He came in third.
Elijah Mena—The Tech 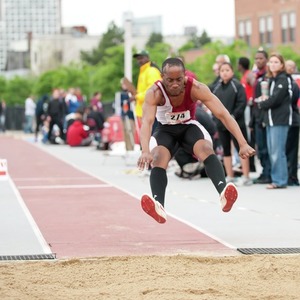 Sheldon N. Trotman ’14 competes in the triple jump. He finished with a distance of 12.93 meters.
Elijah Mena—The Tech 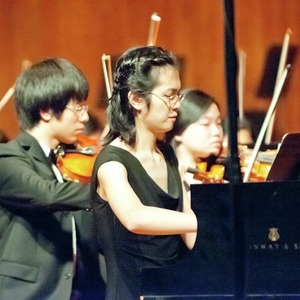 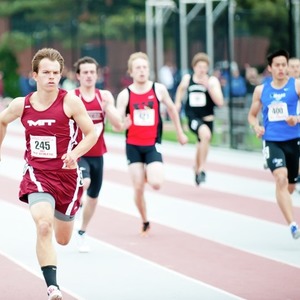 Nicholas A. Diamantoni ’15 runs in the 400-meter dash. He came in second in this heat, but 11th overall.
Elijah MEna—The Tech 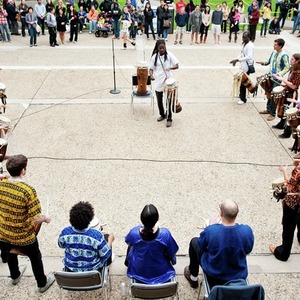