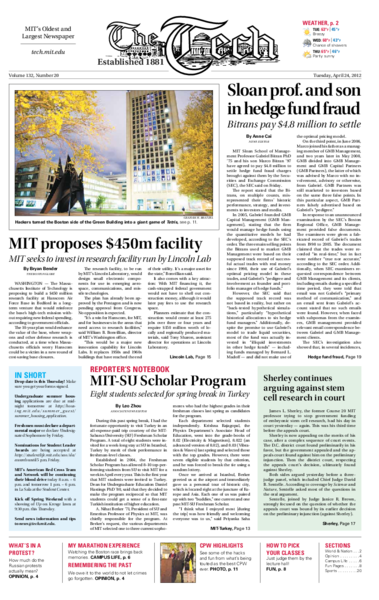 WASHINGTON — The Massachusetts Institute of Technology is proposing to build a $450 million research facility at Hanscom Air Force Base in Bedford in a long-term venture that would reinforce the base’s high-tech mission without requiring new federal spending, according to government officials.

MIT Sloan School of Management Professor Gabriel Bitran PhD ’75 and his son Marco Bitran ’97 have agreed to pay $4.8 million to settle hedge fund fraud charges brought against them by the Securities and Exchange Commission (SEC), the SEC said on Friday.

During this past spring break, I had the fortunate opportunity to visit Turkey in an all-expense-paid trip courtesy of the MIT-Sabancı University (SU) Freshman Scholar Program. A total of eight students were invited for a week-long stay at SU in Istanbul, Turkey by merit of their performance in freshman-level classes.

Drop date is this Thursday! Make sure you get your forms signed.

James L. Sherley, the former Course 20 MIT professor trying to stop government funding of embryonic stem cell research, had his day in court yesterday — again. This was his third time before the appeals court.

With Congress and privacy watchdogs breathing down its neck, Google is stepping up its lobbying presence inside the Beltway — spending more than Apple, Facebook, Amazon and Microsoft combined in the first three months of the year.

WASHINGTON — President Barack Obama moved to tighten sanctions on Syria and Iran on Monday by taking aim at those who provide their authoritarian governments with technology to track down dissidents for abuse, torture or death.

WASHINGTON — Tenants in nearly one million apartments subject to New York City’s rent regulations could breathe a sigh of relief Monday. The U.S. Supreme Court, after indicating it might be interested in hearing a challenge to the regulations, decided to let them stand.

CHARLOTTE, N.C. — Hay and grass seed cover the bare spots on the lawn in front of the stately old City Hall where Occupy Charlotte’s camp held its ground for nearly four months. The occupiers are gone now and the protest movement quieted after arrests, a new anti-camping ordinance and, to a degree, the group’s own missteps along the way.

KABUL, Afghanistan — A week after a complex insurgent attack paralyzed the capital, NATO commanders on Monday offered a startlingly buoyant assessment of security gains across the country and of the readiness of the Afghan police and the army to take full control of their country as U.S. and other international forces leave.

SANFORD, Fla. — Several hours after the city manager announced that he had reached an agreement with Chief Bill R. Lee Jr. to resign over the Sanford Police Department’s handling of the Trayvon Martin case, the City Commission voted late Monday afternoon to reject Lee’s resignation.

The weather at the beginning of this week has been quite a contrast to the weather last week. Last Monday (Patriot’s Day), a record high temperature of 87°F was set in Boston. Temperatures also reached in to the 80°F’s last Tuesday — but this week is quite a different story.

BEIRUT — Syrian government forces engaged in an extended game of cat and mouse against U.N. observers Monday, attacking cities like Hama after the monitors left and adopting a low profile as the monitors visited the Damascus suburbs.

Some math about the Russian protests

While it is true that the 2011-2012 Russian street protests have been unprecedented in recent years in their scale — with a participation unseen since the 1990s — one may well want to take a closer look at the figures being trumpeted by Western and Russian pro-democracy observers and media (which incidentally have almost always been much higher than the official statistics from city authorities).

An obituary for Phyo Kyaw published April 20, 2012 incorrectly spelled the name of a friend of Kyaw as “Di Yi.” The correct spelling is Di Ye ‘10.

During World War I, the world witnessed the first genocide of the twentieth century. From 1915 to 1918, 1.5 million Armenians (approximately 50 percent of the Armenian population at that time), along with other minorities living in the Ottoman Empire, were systematically killed by the Ottoman Turks. The Armenian Genocide is commemorated on April 24; it was on this day in 1915 that the Young Turks, the ruling party of the Ottoman Empire, ordered the killing of Armenian intellectuals, leaders, artists, and businessmen living in the Ottoman Empire. Following this day, many Armenian men were massacred and plans for the genocide were implemented.

MIT received a strong pitching performance from junior Aric J. Dama in game one and then unleashed a 16-hit attack in game two that resulted in a sweep over WPI in a New England Women’s and Men’s Athletic Conference baseball doubleheader. MIT improved to 18-14 overall and 9-10 in the NEWMAC while WPI fell to 21-15 and 9-9 after the final conference games of the season.

MIT Men’s Tennis stayed perfect in New England Women’s and Men’s Athletic Conference play this afternoon with an 8-1 victory over Wheaton College. The No. 28 Engineers won their seventh straight match and improved to 12-3 overall and 4-0 in the NEWMAC. Wheaton fell to 6-6 overall and 0-5 in the conference. 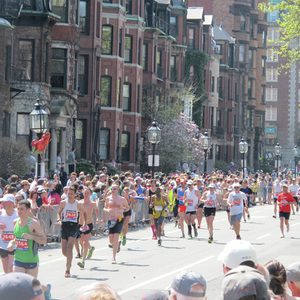 Campus Life outside the mit bubble

Ever since I ran New York City’s Marathon in November 2006, nostalgia has made me a race-watching enthusiast. Last Monday, on Patriots’ Day, I was very excited about going to see the 116th Boston Marathon. I found a free spot on the fence on Commonwealth Avenue just a couple of miles before the finish line. We were standing next to hundreds of people, watching and trying to cheer the marathon runners — I say trying because at that point the only cheerful thought in a runner’s mind is knowing the proximity to the end. 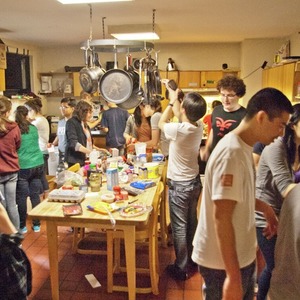 East Campus hosted an Iron Chef event during CPW. Three teams of prefrosh each cooked four or five dishes within one hour and were subsequently judged by a panel of critics. The event was held in Fifth East’s kitchen ...
Tiffany ira Huang—The Tech 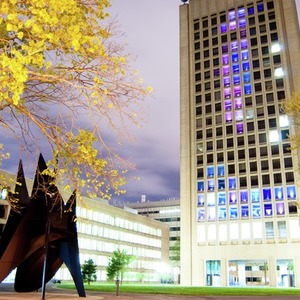 Hackers turned the Boston side of the Green Building into a giant game of Tetris, see p. 11.
Graham H. Bratzel 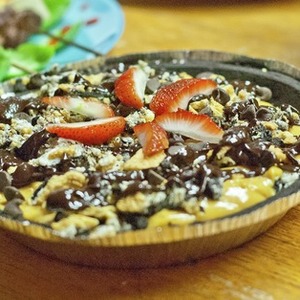 Marathon runners complete their last mile, heading to the finish line at Copley Square. Soaked in sweat, smiling proudly, and physically exhausted, all the finishers made a valiant effort.
Fabiola Michel—the tech 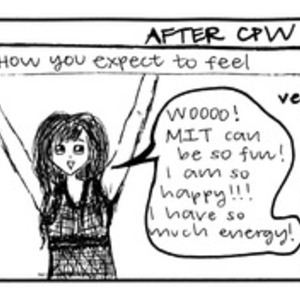 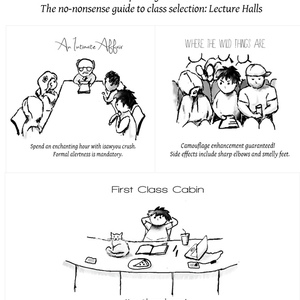 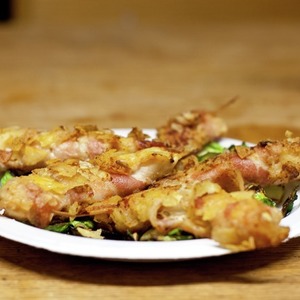 The winning dish was chicken tenderloins wrapped in bacon, coasted in a potato chip breading, pan fried, and served on a bed of crispy Brussels sprouts. It was cooked by “Team Overcoat” and chosen as the winning dish ...
Tiffany Ira Huang—The Tech 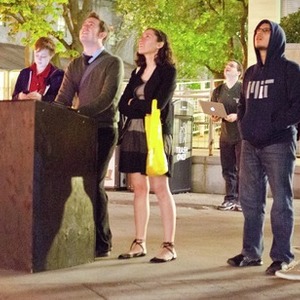 The Tetris game was controlled using two red buttons positioned on a podium below the Green Building. A sign on the podium said “Danger: Do not play Tetris on Green Bldg.”
Joseph Maurer—The Tech 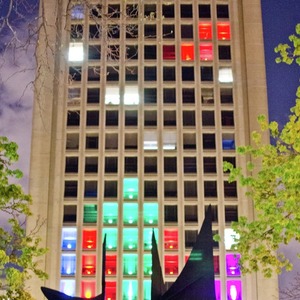 The Green Building became a playable game of Tetris on Friday night, in what was deemed the “Holy Grail of Hacks.” The screen was created by using multicolored lights positioned on each window. The words “TETRIS” scro...
Joseph Maurer—The Tech 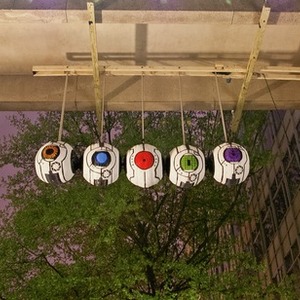 An operational Newton’s cradle composed of personality cores from the video game Portal 2 appeared under the walkway connecting Buildings 56 and 18 on Friday night. When the nearby button of the walkway was pressed, t...
Tiffany ira Huang—The Tech 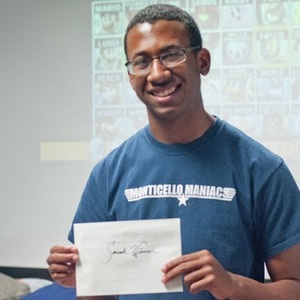 Bryan M. Williams of Alexandria, VA, won $100 to amazon.com in The Tech sponsored CPW Super Smash Bros. Brawl tournament last Friday. Williams, who played as Falco, says that he has been playing Smash since he was sev...
Ian M. Gorodisher—the tech
All Photos From Issue