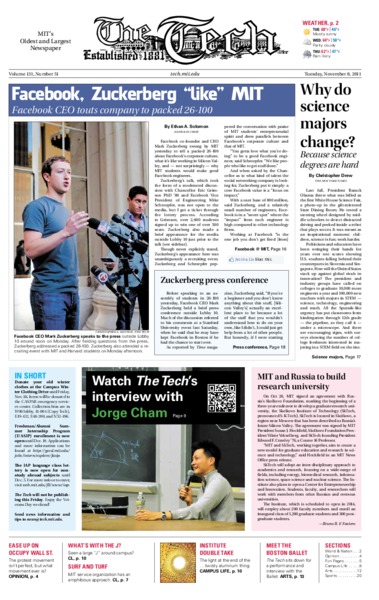 Why do science majors change?

Last fall, President Barack Obama threw what was billed as the first White House Science Fair, a photo-op in the gilt-mirrored State Dining Room. He tested a steering wheel designed by middle schoolers to detect distracted driving and peeked inside a robot that plays soccer. It was meant as an inspirational moment: children, science is fun; work harder.

A few days before MF Global’s collapse, regulators stationed at the firm were assured its books were in order.

Before speaking to an assembly of students in 26-100 yesterday, Facebook CEO Mark Zuckerberg held a brief press conference outside Lobby 10. Much of the discussion referred to his comments at a Stanford University event last Saturday, when he said that he may have kept Facebook in Boston if he had the chance to start over.

On Oct 26, MIT signed an agreement with Russia’s Skolkovo Foundation, marking the beginning of a three-year endeavor to develop a graduate research university, the Skolkovo Institute of Technology (SkTech, pronounced S-K-Tech). SkTech is located in Skolkovo, a region near Moscow that has been described as Russia’s future Silicon Valley. The agreement was signed by MIT President Susan J. Hockfield, Skolkovo Foundation President Viktor Vekselberg, and SkTech founding President Edward F. Crawley ’76, a Course 16 Professor. 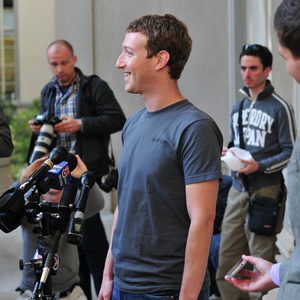 Facebook co-founder and CEO Mark Zuckerberg swung by MIT yesterday to tell a packed 26-100 about Facebook’s corporate culture, what it’s like working in Silicon Valley, and — not surprisingly — why MIT students would make good Facebook engineers.

ROME — With political turmoil still plaguing Greece and descending upon the much larger economy of Italy on Monday, the fate of the euro and market stability worldwide hinged on whether two of Europe’s most tangled and unresponsive political cultures could deal with their tightening fiscal gridlock.

WASHINGTON — Republican members of a congressional panel seeking ways to cut the federal budget deficit indicated Monday that they might allow some additional tax revenue as part of a deal with Democrats.

BEIRUT — The Syrian government has launched a bloody assault to retake Homs, the country’s third-largest city, facing armed defectors who have prevented the government’s forces from seizing it as they did other restive locales this summer, in what may stand as one of the most violent episodes in an eight-month uprising.

WASHINGTON — The State Department’s inspector general will conduct a special investigation of the handling of the pending decision on the proposed Keystone XL pipeline in response to reports of improper pressure on policy makers and possible conflicts of interest, according to documents released Monday.

Wall Street bonuses are projected to drop up to 30%

Wall Street bonuses are set to fall by an average of 20 to 30 percent this year from a year ago, according to a closely watched compensation survey — the weakest bonus season since the financial crisis and a reflection of the leaner times confronting the industry. 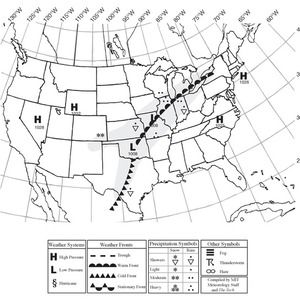 Unseasonably warm in first half of week

A high pressure system is in control for the first half of the week, bringing beautiful weather conditions to the Boston area. Similar to yesterday, today and tomorrow should be sunny with unseasonably warm temperatures. Normal high temperatures for this time of year are around 55°F, but we may experience temperatures over 10°F higher than that. Enjoy the nice weather while at lasts, because a coastal low will approach the region on Thursday. With plenty of moisture associated with that system, there is a potential for heavy rain Thursday afternoon and evening. The low will exit Friday morning, with clouds dissipating as a high pressure moves in from the southwest. The temperatures on Friday will be more seasonal, as northwest winds behind the exiting low advect colder air into the region.

Republicans should not ignore Occupy Wall Street

The Occupy Wall Street movement has been lambasted by Republicans nearly since its inception. This is not entirely unreasonable — interviews with some of the protesters have demonstrated an extensive lack of knowledge regarding what they’re protesting and why they’re protesting it. One college student said that he thought the government should pay for his college tuition simply because he wants them to. Others, even if they are able to clearly enunciate problems, have no ideas about the solution. As such, it has been only too easy for Republicans to trivialize the movement, portraying it as a group of people too lazy to look for work, individuals who simply want everything handed to them, or people who are looking for something to do and figure that Occupy Wall Street — being the latest fad — would be fun.

The curtains rise and we see a young girl teasing her nurse, pushing her this way and that, pulling at her dress, running circles around her. The girl turns shy when her mother walks in, but then can barely contain her excitement when she is given a lovely new dress to wear to her first big party. 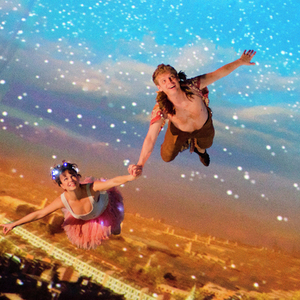 Since J.M. Barrie’s inaugural London stage production in 1905, countless iterations of Peter Pan have graced film and the stage. Each form has its charm; the intimacy of Wendy caring for the Lost Boys shines on the small stage, whereas the majesty of cavorting through the London Sky on the way to Neverland seems a feat best left to cinematography. All of these iterations form a collective memory of the Peter Pan story, but no one adaptation can stand alone.

Sylvia Deaton, 20, has been dancing since she could walk, and knew she wanted to be a professional dancer from a very young age. At age six, she began taking ballet, jazz and tap classes, and was soon participating in dance competitions and winning regional and national titles. She was inspired by Broadway shows and local ballet performances her family would bring her to, and would practice the moves at home, using her sister as a male partner and rows of stuffed animals as her audience.

After a strong finish last week against WPI, the Engineers advanced to the NEWMAC semifinals. MIT lost in all three sets with final scores of 25-16, 25-10, and 25-15. MIT opened the first two sets taking the first two points, fighting throughout the matches for a lead over Springfield. The third match began with Springfield in the lead, and they kept ahead of MIT to eventually take the win, sweeping the Engineers in all three matches.

The MIT Field Hockey and Women’s Soccer teams won their NEWMAC championships this past Sunday — both in dramatic fashion, and both for the second time in the past three years. 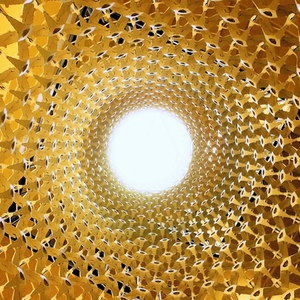 Located at the stairwell of Building 3, Dis(Course)4 is a Festival of Art, Science, and Technology (FAST) installation created by graduate students Craig A. Boney G, James R. Coleman G, and Andrew J. Manto G in Course 4 in April 2011. The structure is composed of hundreds of aluminum pieces that are fastened by zip ties and supported by steel cables. This photo emphasizes the repetition of the elements through the use of point lighting and symmetry. A small aperture is chosen to ensure a large depth of field. The white balance is intentionally skewed to add warmth to the otherwise white installation. 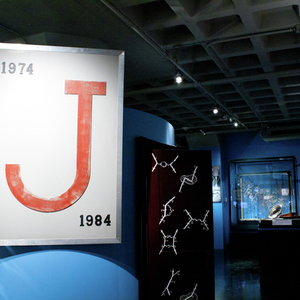 I may not remember as much as I would like from 3.091 (Introduction to Solid-State Chemistry), but I do remember the big, red “J”. And no, J here does not stand for joule. 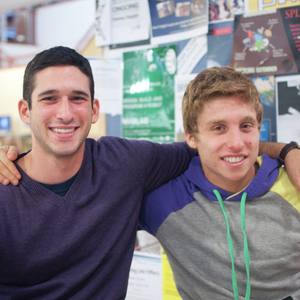 PUBLIC SERVICE @ MIT In and out of the water

“Success in and out of the water.” That is the motto of Amphibious Achievement, an MIT service group established last January that aims to promote success for area high-schoolers through athletic training, specifically in crew and swimming, and academic instruction, with a focus on college prep in a way that is fun and innovative. The program runs on Sundays from 9 a.m. to 12:30 p.m. during the school year on campus.

This is a transcript from an interview with Jorge Cham (creator of PhD comics), Margaret “Meg” A. Rosenburg ’07 (producer of the PhD movie), Evans T. Boney ’06 (actor playing Mike Slackenerny), and Scott Elmegreen (composer). The full transcript is at and the video is at . 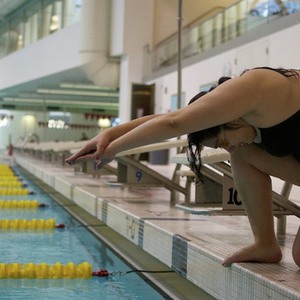 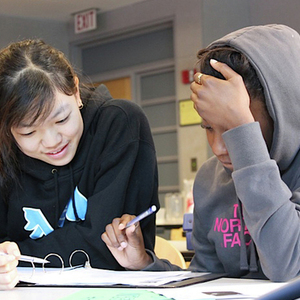 This “J,” representing the J/ψ meson is displayed at the MIT Museum.
Fangfei Shen

Zuckerberg speaks to the press prior to his appearance in 26-100. Over 2,600 students entered the ticket lottery to see Zuckerberg speak.
Kailiang Chen 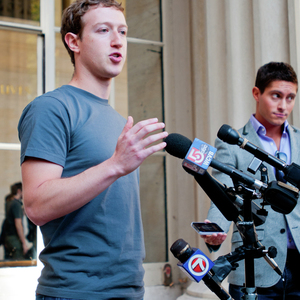 Facebook CEO Mark Zuckerberg speaks to the press outside Lobby 10 around noon on Monday. After fielding questions from the press, Zuckerberg addressed a packed 26-100. Zuckerberg also attended a recruiting event with ...
Christopher A. Maynor—The Tech 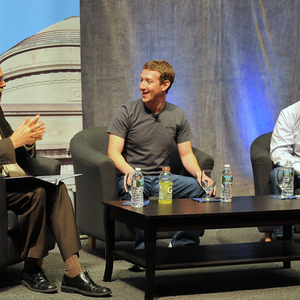 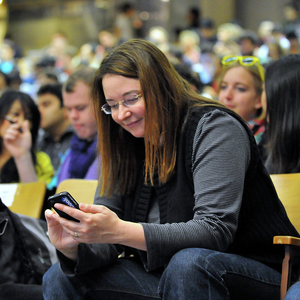 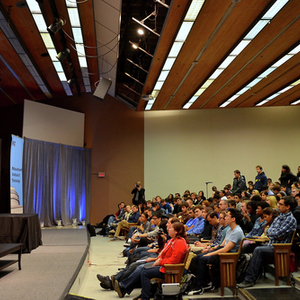 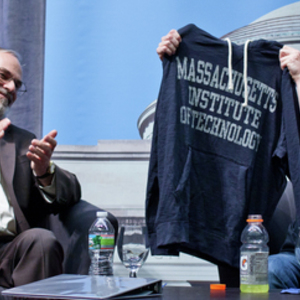 Zuckerberg, a Harvard dropout, graciously accepts an MIT hoodie from Chancellor Grimson at the end of the discussion.
Nicholas Chornay—The Tech 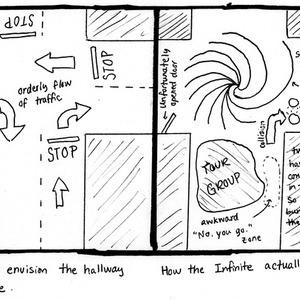 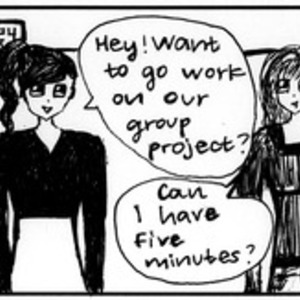 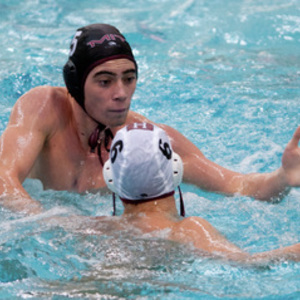 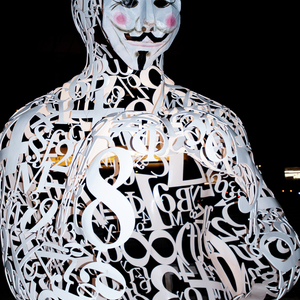 Hackers placed a Guy Fawkes mask, worn by the character V from V for Vendetta, over the blank face of the Alchemist statue early Saturday morning. The fifth of November is commemorated in Britain for the failure of th...
Bruno B. F. Faviero—The Tech 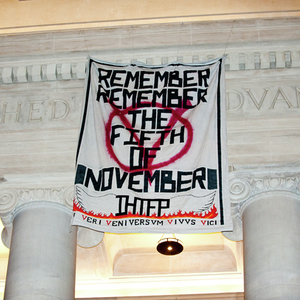 Hackers hung a banner on the inside of Lobby 7 commemorating the fifth of November. The Latin is five words beginning with the letter V, meaning, “By the power of truth, I, while living, have conquered the universe” —...
Bruno B. F. Faviero—The Tech 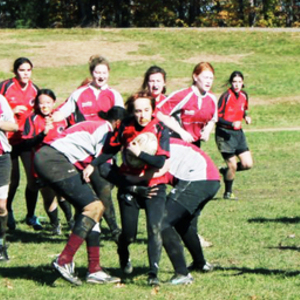 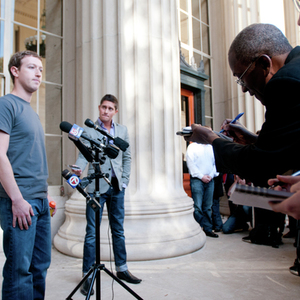 An excited Hiawatha Bray, reporter for the Boston Globe, tries to ask Zuckerberg questions during the press event on Monday.
Christopher A. Maynor—The Tech 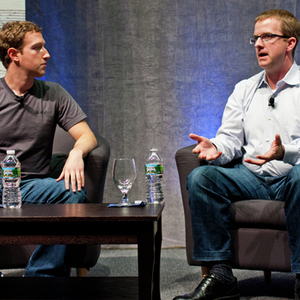 Zuckerberg (and occasionally Schroepfer) answered a variety of questions covering topics ranging from online privacy to Facebook’s addictiveness — the latter of which Zuckerberg attributed to a combination of human so...
Nicholas Chornay—The Tech
All Photos From Issue