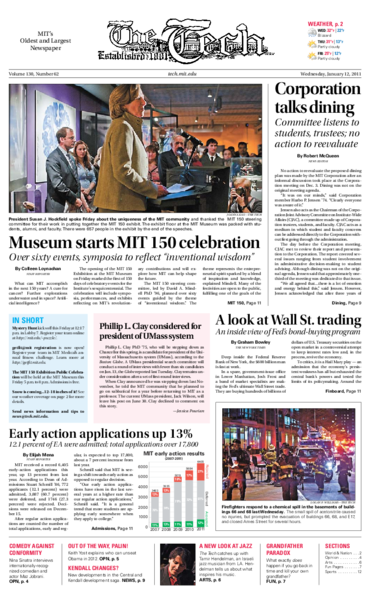 No action to reevaluate the proposed dining plan was made by the MIT Corporation after an informal discussion took place at the Corporation meeting on Dec. 3. Dining was not on the original meeting agenda. 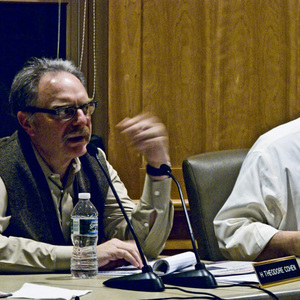 Zoning board lukewarm about MIT’s plan for Kendall

On Dec. 21, MIT representatives presented MIT’s vision for the future of Kendall Square to the City of Cambridge Planning Board. The response they got was mixed, with some of the five members present comfortable with the proposal, and others cautious. All had criticisms to offer.

Phillip L. Clay PhD ’75, who will be stepping down as Chancellor this spring, is a candidate for president of the University of Massachusetts system (UMass), according to the Boston Globe. A UMass presidential search committee will conduct a round of interviews with fewer than six candidates on Jan. 13, the Globe reported last Tuesday. Clay remains under consideration after a set of first-round interviews.

A look at Wall St. trading

Deep inside the Federal Reserve Bank of New York, the $600 billion man is fast at work. 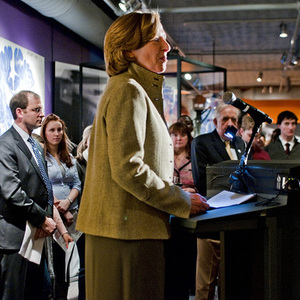 What can MIT accomplish in the next 150 years? A cure for cancer? Further explorations underwater and in space? Artificial intelligence?

TUCSON, Ariz. — Just three days after a bullet passed through Rep. Gabrielle Giffords’ brain, and one day before the president was scheduled to come here to address the shooting rampage in which she was wounded, doctors said Tuesday that Giffords’ chances of survival were certain. She is able to breathe on her own, although she remains on a ventilator as a precaution.

A dramatic taste of winter for today

The top weather story on this Jan. 12 becomes apparent just by looking outside! Heavy snow has moved into southern New England as a strengthening low pressure system plows up the East Coast. The heavier snow squalls should taper off by this evening. In Massachusetts, excluding the Cape, snowfall amounts will average around a foot before the nor’easter exits by tonight. In fact, Boston’s average January snowfall is 12 inches (the forecasted storm total!). Winds will be increasing through today to near 25 mph, creating some areas of blowing snow as well.

BEIJING — Defense Secretary Robert M. Gates warned Tuesday that North Korea was within five years of being able to strike the continental United States with an intercontinental ballistic missile and said that, combined with its expanding nuclear program, the country “is becoming a direct threat to the United States.”

WASHINGTON — The presidential panel investigating the 2010 oil spill in the Gulf of Mexico recommended Tuesday that Congress approve substantial new spending and sweeping new regulations for offshore oil operations at a time when the appetite for both is low.

WASHINGTON — The Obama administration, following a lengthy internal debate, has unexpectedly come down on the side of pharmaceutical companies that are accused of overcharging public hospitals and clinics that care for large numbers of poor people.

Ending months of speculation, Verizon announced Tuesday that it would begin selling a version of the iPhone 4 early next month. 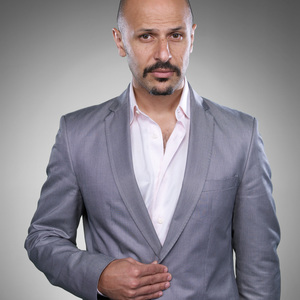 Iranian born American comedian Maz Jobrani has gained international recognition for his work in film, television, and stand-up comedy. A founding member of the Axis of Evil Comedy Tour, Jobrani has travelled throughout North America, the Middle East, Europe, and Australia using his comedic talents to talk about life as a Middle Eastern American — particularly, anecdotes from his family and from observations of his own ethnic group.

Republicans need a fresh candidate to do well in 2012

Intrade.com is an online prediction market that tracks, among other things, U.S. politics. In the aftermath of a bruising defeat of Congressional Democrats, Intrade predicts more of the same in 2012. The market currently gives Republicans a 3 in 5 chance of retaining control of their newly acquired House, and roughly a 2 in 3 chance of taking or tying the Senate. 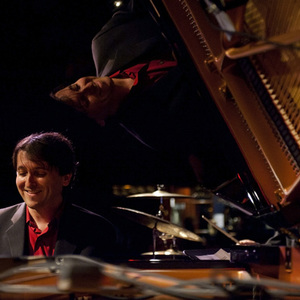 Tamir Hendelman is a young Israeli musician and a product of the Los Angeles jazz scene. His latest Boston performance at Sculler’s Jazz Club was particularly lively, with Tim Horner on drums and Martin Wind on bass. Hendelman’s music is quite accessible, and he does a particularly good job of combining various musical influences together. Credit should also be given to Horner and Wind, who gave a decisive edge to the trio’s sound. Tamir Hendelman has two recordings released to date: 2010’s Destinations with Lewis Nash and Marco Panascia, and 2008’s Playground with Jeff Hamilton and John Clayton.

Engineers fall 73-56 to Babson at NEWMAC opener, face WPI next

The MIT men’s basketball team hosted Babson in its NEWMAC opener on Saturday. Despite four Engineers finishing in double-figures, Babson connected on nearly 52 percent of its shots to hand the nationally-ranked No. 19 Engineers a 73-56 loss, their third in four games.

The MIT men’s and women’s swimming and diving teams traveled to Wheaton College last Thursday for their first meet of the year.

The MIT Ski Team completed its first week of IAP training camp this weekend with two giant slalom races at Mount Sunapee in New Hampshire. On each race day, the skiers are timed in two runs of the course(s), and their total times determine finishes. In the McConnell Division, totals of each team’s top four female and top five male finishes determine the team results. Every MIT individual racer posted successful finishes, though the small teams’ standings were affected by time penalties for having too few scores. The women’s team is currently tenth out of ten schools, while the men are ninth out of nine schools.

Maz Jobrani, a founding member of the Axis of Evil Comedy Tour and an internationally recognized stand-up comedian, spoke with The Tech’s Nina Sinatra.
Photo courtesy of Maz Jobrani 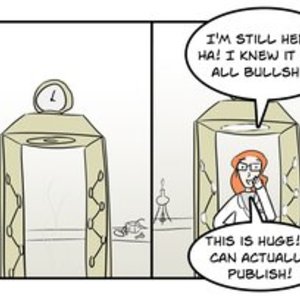 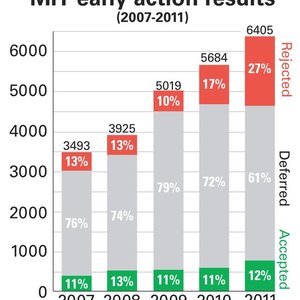 President Susan J. Hockfield spoke Friday about the uniqueness of the MIT community and thanked the MIT 150 steering committee for their work in putting together the MIT 150 exhibit. The exhibit floor at the MIT Muse...
Joanna Kao—The Tech

H. Theodore Cohen, one of seven members of the Cambridge Planning Board, speaks at the Dec. 21, 2010 meeting.
John A. Hawkinson—The Tech 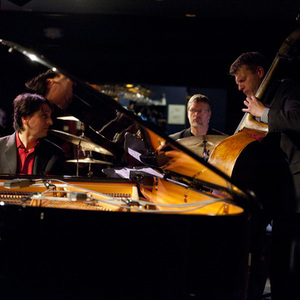 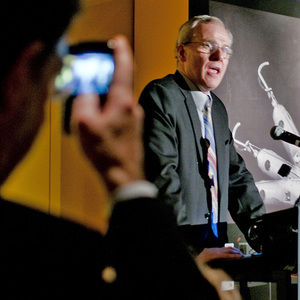 John R. Durant, Director of the MIT Museum and Historical Collections, spoke Friday at the press opening of the MIT 150 exhibit, giving perspective on the process of creating the exhibit. He spoke of a museum worker w...
Joanna Kao—The Tech 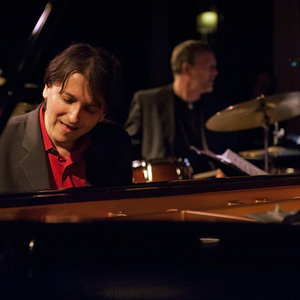 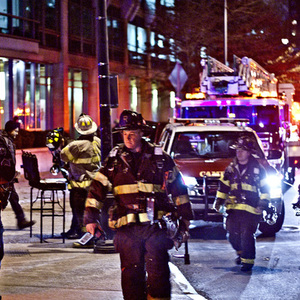 Firefighters respond to a chemical spill in the basements of buildings 66 and 68 Thursday. The small spill of acetonitrile caused no injuries, but caused the evacuation of buildings 66, 68, E17, E18, and E19 and clos...
Logan Williams—The Tech
All Photos From Issue