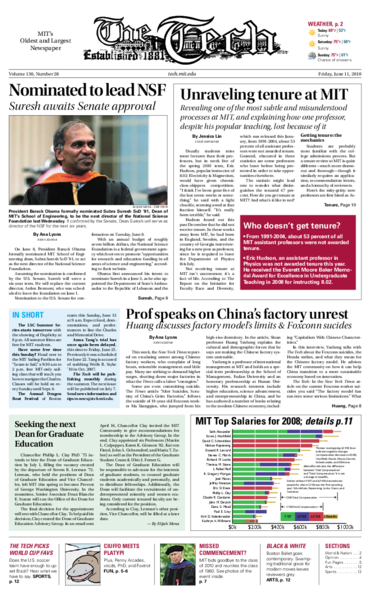 Anna Tang’s trial has stopped in mid-stream, because an expert for the prosecution has changed her mind. The trial won’t resume before mid-August. 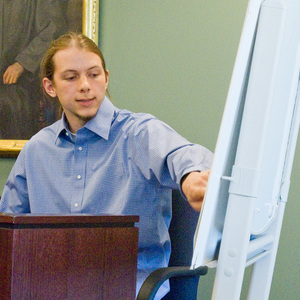 Wolfe B. Styke ’10 testified Friday on the opening day of Commonwealth v. Anna Tang, the trial of the former Wellesley student who stabbed Styke in his Next House dormitory room in October 2007. 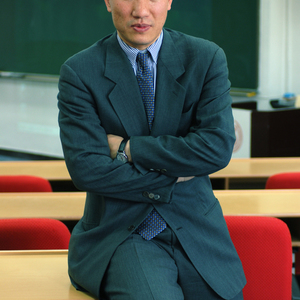 This week, the New York Times reported on escalating unrest among Chinese factory workers, who complain of long hours, miserable management and little pay. Many are striking to demand higher wages, shutting down major factories in what the Times calls a labor “contagion.” 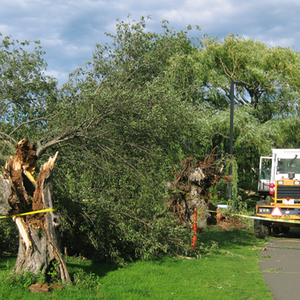 A series of powerful thunderstorms tore across Massachusetts this past weekend. Lightning and high winds caused loss of power to thousands of residents statewide. A tornado watch was put into effect on Sunday in Middlesex County, Worcester County, Franklin County, Hampden County and Hampshire County.

An article published on June 4 about former student Lori Berenson incorrectly stated that she was married to guerilla leader Nestor Cerpa at the time of her 1995 arrest. Berenson was not married to Cerpa, but she was with his wife at the time of the arrest. 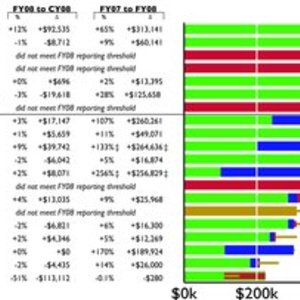 Because of changes in IRS regulations, this data is for calendar year 2008, but the previously reported data were for fiscal years ending June 30. As a result, this year’s CY08 12-month period overlaps by 6 months with the FY08 12-month period.

The LSC Summer Series starts tomorrow with the showing of Duplicity at 8 p.m. All summer films are free for MIT students.

Seeking the next Dean for Graduate Education 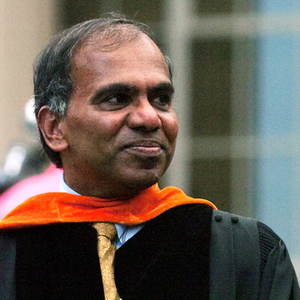 On June 8, President Barack Obama formally nominated MIT School of Engineering dean, Subra Suresh ScD ’81, to act as the next director of the National Science Foundation.

Usually students miss more lectures than their professors, but in week five of the spring 2010 term, Eric Hudson, popular instructor of 8.02: Electricity &amp; Magnetism, would have given chronic class-skippers competition. “I think I’ve been gone five of the last seven weeks or something,” he said with a light chuckle, seeming awed at that fraction himself. “It’s really been terrible,” he said.

Calls for shift on Gaza policy;  building a private sector

GAZA — Three years after Israel and Egypt imposed an embargo on this tormented Palestinian strip, shutting down its economy, a consensus has emerged that the attempt to weaken the governing party, Hamas, and drive it from power has failed.

ZHONGSHAN, China — Striking workers at a Honda auto parts plant here are demanding the right to form their own labor union, something officially forbidden in China, and held a protest march Friday morning.

A government panel Thursday essentially doubled its estimate of how much oil has been spewing from the out-of-control BP well, with the new calculation suggesting that an amount equivalent to the Exxon Valdez disaster could be flowing into the Gulf of Mexico every eight to 10 days.

JOHANNESBURG — The World Cup begins here Friday with excitement at so elevated a level that even many of the unhappy are happy.

You can parse a voting record. Flip-flops — political ones — are fair game. But don’t talk about a woman’s hair.

This past Sunday, a severe thunderstorm blew through the Boston area, leaving scattered branches and toppled trees in its wake. The National Weather Service has confirmed that the wind damage associated with this storm was caused by a macroburst, or a large downdraft of air usually generated by a thunderstorm, which can cause very strong, sustained winds over an area several miles wide. While quite different from tornadoes, macrobursts can cause similar damage in some cases. During the macroburst this past weekend, the Green Building recorded a wind gust of 56 mph.

WASHINGTON — The United States is badly lagging in basic research on new forms of energy, deepening the nation’s dependence on dirty fuels and crippling its international competitiveness, a diverse group of business executives warn in a study to be released Thursday.

Muhammad in a bear costume

On November 2, 2004, Theo van Gogh, a Dutch film director, author, and father, was shot and killed by Mohammed Bouyeri as van Gogh rode his bicycle to work. In the open air of the streets of Amsterdam, Bouyeri shot van Gogh eight times, attempted to decapitate him, and then finished by stabbing two knives into his chest, pinning there a 5-page manifesto threatening the lives of others, including a prominent Dutch politician.

Lifestyle, Yes. Life and Style, No.

Today, Grace Kelly may just be the song title of a mildly annoying, sugar-coated pop song by Mika, but thirty years ago, Grace Kelly was one of the most photographed women of the twentieth century. An Academy Award-winning American actress, she became a film star just as suddenly as she married a real prince, became Her Serene Highness The Princess of Monaco, and then tragically died in a car accident.

Jiri Kylian’s Black and White closed for Boston Ballet’s 2009-2010 season. It was a familiar return from its initial premiere with the Boston Ballet in 2005. With the exception of its performances in Boston, the pieces have only been performed in the Netherlands. Although back by popular demand, considering its contemporary avant-garde style, Black and White is still a unique addition in comparison to the other more classical pieces of the Boston Ballet season.

Are you ready for some football?  (No, the other kind)

The 2010 FIFA World Cup begins on June 11 in Johannesburg as the host, South Africa, take on their Group A opponents, Mexico. It will be the first tournament to be hosted by an African country and the first in which the host nation, not the defending champions (this year Italy, which won on 2004), will play the opening match.

MIT Sloan Professor Yasheng Huang gave The Tech an exclusive interview regarding the recent Foxconn suicides and the Honda strikes in China, what they mean for the Chinese factory model, and how MIT can help China mov...
Courtesy of Yasheng Huang

2008 Top Salaries at MITBecause of changes in IRS regulations, this data is for calendar year 2008, but the previously reported data were for fiscal years ending June 30. As a result, this year’s CY08 12-month period... 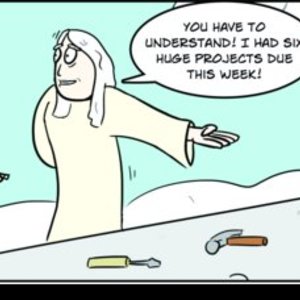 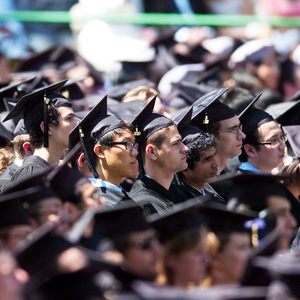 The Class of 2010 graduates listen as Raymond S. Stata ’57 gives the keynote speech at Commencement in Killian Court on June 4. Stata, founder of Analog Devices, told students, “As MIT graduates, we are all innovators...
Elijah Mena—The Tech 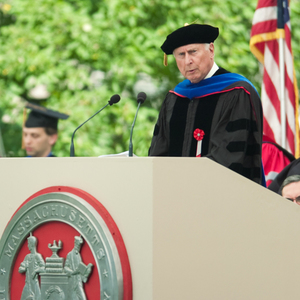 Raymond S. Stata ’57 speaks to graduates of the class of 2010 during the 144th Commencement in Killian Court on June 4. In his keynote address, Stata shared insights about entrepreneurship and business management.
Elijah Mena—The Tech 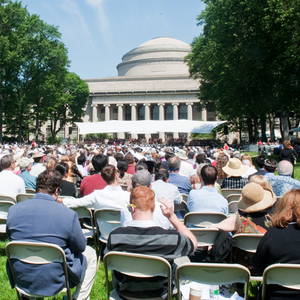 Family and friends of the Class of 2010 filled Killian Court to watch Commencement festivities. A total of 912 undergraduate students and 1443 graduate students received their diplomas on Friday.
Feng Wu—The Tech 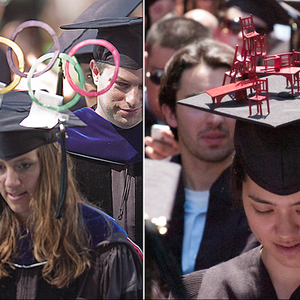 Graduates of the Class of 2010 display their decorated mortarboards during Commencement on June 4 in Killian Court. Other creative designs included a pair of stuffed beavers and a camera.
Elijah Mena—The Tech 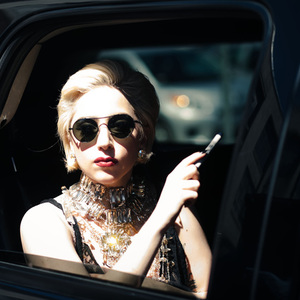 Lady Gaga, pop singer and recording artist, signs autographs for fans before departing from the back entrance of the MIT Museum on Wednesday afternoon.
Eric D. Schmiedl—The Tech 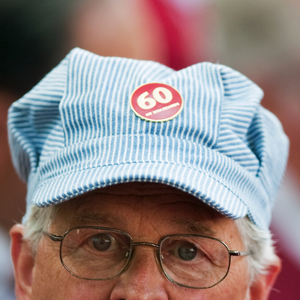 An alumnus of the Class of 1960 attends Commencement 2010 in Killian Court on June 4. Commencement also coincided with Reunion week.
Elijah Mena—The Tech 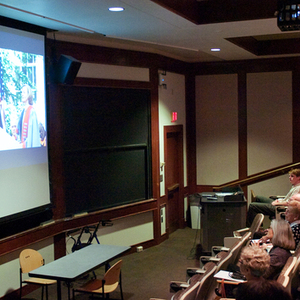 Family of graduating seniors watch a live stream of the Commencement exercises in room 2-105 on June 4. A live video webcast was provided by the MIT Academic Media Production Services.
Elijah MEna—The Tech

Wolfe B. Styke ’10 testifies on the opening day of the Commonwealth v. Anna Tang on Friday. Tang, a former Wellesley student, stabbed Styke while he was sleeping in his dormitory room at Next House in October 2007. Th...
John A. Hawkinson—The Tech

A macroburst, a large downdraft of hurricane force winds, hit the Esplanade during Sunday’s tumultuous thunderstorm. Over 30 trees sustained significant damage and cleanup crews were brought in to remove the debris.
Aviv Ovadya—The Tech 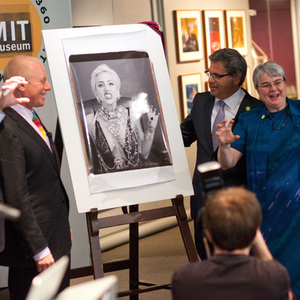 Earlier Wednesday, Lady Gaga posed for a 20- by 24-inch Polaroid picture, which will remain on permanent display at the museum. This past January, Gaga was named creative director for Polaroid corporation, which was o...
Eric D. Schmiedl—The Tech
All Photos From Issue