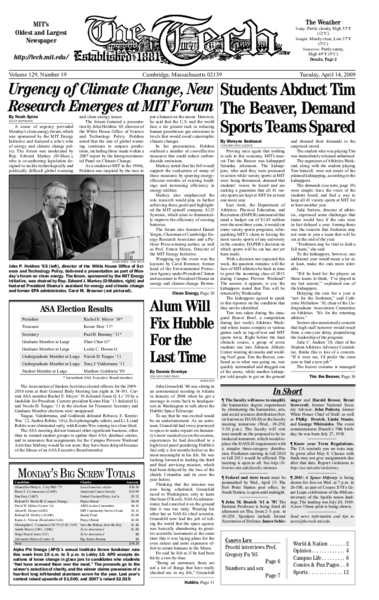 The faculty will move to simplify the humanities degree requirement by eliminating the humanities, arts, and social sciences distribution (better known as HASS-D) at the faculty meeting tomorrow (Wed., 10-250, 3:30 p.m.). The faculty will vote next month on the proposal to be introduced tomorrow, which would replace the HASS-D requirement with a simpler three-category distribution. Freshmen starting in fall 2010 or fall 2011 would be affected. The meeting is open to all. See http://libraries.mit.edu/faculty-minutes.

Proving once again that nothing is safe in this economy, MIT’s mascot Tim the Beaver was kidnapped Saturday afternoon. The kidnappers, who said they were pressured to action while varsity sports at MIT were being threatened, demand that students’ voices be heard and are seeking a guarantee that all 41 varsity sports are kept at MIT for at least one more year. 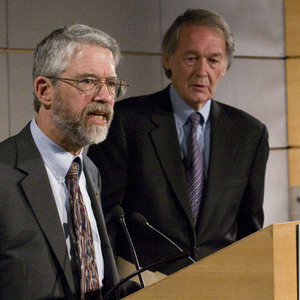 A sense of urgency pervaded Monday’s clean energy forum, which was sponsored by the MIT Energy Initiative and featured a who’s who of energy and climate change policy. The forum was moderated by Rep. Edward Markey (D-Mass.), who is co-authoring legislation designed to tackle technologically and politically difficult global warming and clean energy issues.

Alum Will Fix Hubble For the Last Time

John Grunsfeld ’80 was sitting in an astronomical meeting in Atlanta in January of 2004 when he got a message to come back to headquarters in Washington to talk about the Hubble Space Telescope.

<i>The following incidents were reported to the MIT Police between Jan. 16, 2009 and Mar. 21, 2009. This summary does not include incidents such as false alarms, general service calls, or medical shuttles.</i>

Taliban insurgents are teaming up with local militant groups to make inroads in Punjab, the province that is home to more than half of Pakistanis, reinvigorating an alliance that Pakistani and American authorities say poses a serious risk to the stability of the country.

Just a year ago, working as a product presenter at an auto show was a pretty straightforward job. You stood next to a vehicle, you called it a marvel of engineering, style and comfort and then you fielded softball questions like, “What does this baby cost?”

China’s Cabinet released on Monday what it called a human rights action plan, a lengthy document promising to improve the protection of civil liberties, which are often neglected and sometimes systematically violated in China.

The Obama administration and its European allies are preparing proposals that would shift strategy toward Iran by dropping a long-standing American insistence that Tehran rapidly shut down nuclear facilities during the early phases of negotiations over its atomic program, according to officials involved in the discussions.

Six months after accepting a financial lifeline from Washington, a newly profitable Goldman Sachs is pushing to return the billions of taxpayer dollars that it received in an effort to extricate itself from heightened government control.

Stormy Down South, Dry Up North

Severe weather has been wreaking havoc in the southeastern United States over the past few days. Over the weekend, severe thunderstorms caused widespread power outages, toppled trees, and spawned tornadoes as they carved a path through parts of Alabama, Georgia, Tennessee, Arkansas, and the Carolinas. Widespread damage and flooding was reported as were several deaths and injuries. The region was then battered by another storm system on Monday, with strong winds, heavy rain, and hail reported across Alabama, Georgia, Tennessee, Kentucky, and Florida. More severe weather was expected at the time of this writing Monday night, with severe thunderstorm and tornado watches posted by the National Weather Service across the Southeast.

Strife Swells In the Streets of Bangkok

Soldiers armed with assault rifles fought running street battles with anti-government protesters in Bangkok on Monday as unrest spread through a wider swath of the city, and the chief of Thailand’s armed forces vowed to use “every means to end the chaos.”

At the end of this month, a host of influential people will be coming to MIT to speak at the opening of the Dalai Lama Center for Ethics and Transformative Values at MIT. The opening event will be headlined by the Dalai Lama and influential composer Philip Glass. The speakers cover a wide range of disciplines, including ethics, political science, environmental policy, psychology, neuroscience, economics, music, theater, religion, and spirituality. The educational focus of the Center for Ethics is to be similarly multidisciplinary.

A Research System Set Up to Fail

Thomas Friedman has a solution to fix the global energy problem and boost the economy. In his latest book, <i>Hot, Flat and Crowded</i>, Friedman presents it succinctly: “We need 100,000 people in 100,000 garages trying 100,000 things — in the hope that five of them break through.”

On Saturday, April 4, the MIT Sport Taekwondo team travelled to the University of Pennsylvania to compete in the fourth Eastern Collegiate Taekwondo Conference (ECTC) tournament of the year. This tournament was a crucial for the team, since a loss could mean the loss of the long aspired-for ECTC cup to the rival team from Cornell University. Despite being outnumbered by the team from Cornell, MIT’s team — coached by head instructor Dan Chuang and led by captains Christopher J. Han ’09 and Corinna Hui ’09 — finished first.

MIT is full of numbers, from buildings to classes. We’re surrounded by them. Who doesn’t associate with some form of numbers? There are the ones that we always remember: our course numbers, our phone numbers, and our student ID numbers. And then, there are numbers that we choose to forget, like our “count.”

I like going to plays and theatre shows. It makes me feel cultured, the same way that going to movies makes me feel social and going to wild parties makes me feel sullied and vulnerable. I’ve always had an appreciation for the theatre, if only because it’s one of the most genuine forms of narrative entertainment out there. No CGI, no take two, no lip-syncing. There’s a great deal of appeal in the knowledge that each performance is unique, that the performers are walking and/or doing their high-kicks on a tightrope without the safety net of an editing room or stunt double.

<i>S. Campbell Proehl:</i> Your lab focuses on asymmetric synthesis and palladium-catalyzed coupling reactions. Could you put this into layman’s terms for the general MIT population? 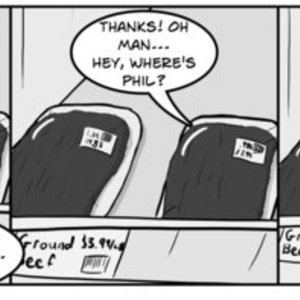 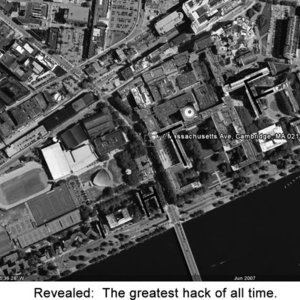 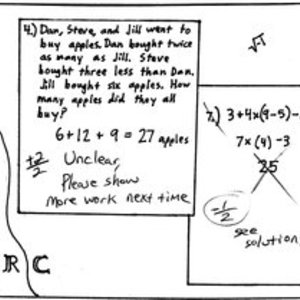 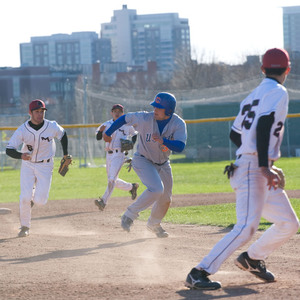 Bryan A. Macomber ’12 (left) and Kenneth M. Lin ’12 of the MIT baseball team catch US Coast Guard Academy’s Brian Yurovich in a rundown between the second and third bases, ultimately tagging him out in the second game...
Chelsea Grimm—The Tech
All Photos From Issue