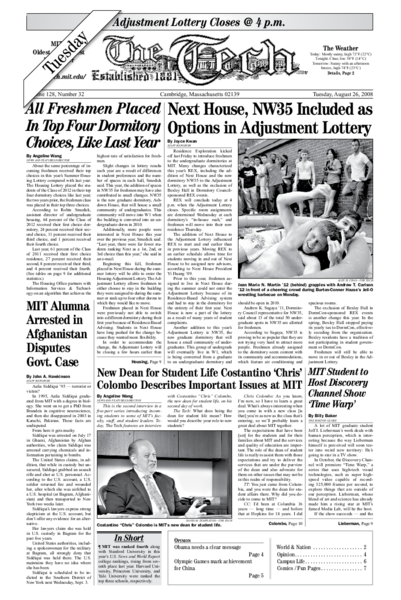 About the same percentage of incoming freshmen received their top choices in this year’s Summer Housing Lottery compared with last year. The Housing Lottery placed the students of the Class of 2012 in their top four dormitory choices like last year; the two years prior, the freshman class was placed in their top three choices. 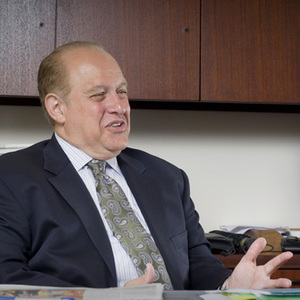 <i>This is the second interview in a five-part series introducing incoming students to some of MIT’s faculty, staff, and student leaders. Today, </i>The Tech<i> features an interview with Costantino “Chris” Colombo, the new dean for student life, on his second day of work.</i>

A lot of MIT graduate student Jeff I. Lieberman’s work deals with human perception, which is interesting because the way Lieberman himself is perceived will soon teeter into weird new territory: He’s going to star in a TV show.

According to Vinayak V. Ranade ’09, president of East Campus, a number of administrators and members of the Residential Life Office found the EC entries in last Friday’s <i>Daily Confusion</i> to be “tasteless.”

What percentage of each dorm’s new residents ranked it as their first choice in the summer lottery?

What percentage of each dorm’s new residents ranked it as their first choice in the summer lottery?

How many freshmen designated each residence as their first choice?

How many freshmen designated each residence as their first choice? 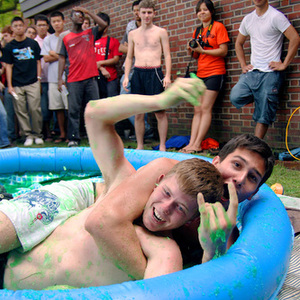 Next House, NW35 Included as Options in Adjustment Lottery

Residence Exploration kicked off last Friday to introduce freshmen to the undergraduate dormitories at MIT. Many changes characterized this year’s REX, including the addition of Next House and the new dormitory NW35 to the Adjustment Lottery, as well as the exclusion of Bexley Hall in Dormitory Council-sponsored REX events.

Sen. Edward M. Kennedy, struggling with terminal brain cancer, arrived on Monday night at the Democratic National Convention in a triumphant appearance that provided an emotional start for the event as the party turned to a new era and gathered to nominate Sen. Barack Obama for president.

Pakistan’s fledgling civilian government collapsed on Monday, as the leaders of the main two coalition parties turned their sights on each other, only a week after banding together to force the resignation of Pervez Musharraf.

Days after top Iraqi and U.S. officials suggested that a draft of the security pact between the countries was close, Prime Minister Nouri Kamal al-Maliki toughened his language, reiterating earlier Iraqi demands for a fixed date for the withdrawal of U.S. troops.

Jubilant opposition legislators in Zimbabwe’s parliament broke into song and dance on Monday after their candidate won the powerful position of speaker of parliament, defeating a nominee backed by President Robert Mugabe’s party, ZANU-PF.

The last time South Ossetia declared independence from Georgia — the last three times, actually — hardly anyone noticed. Even Russia, its great friend to the north, declined to take up the cause.

Dozens of people were killed and more than 100 were injured Monday in a government assault on a huge camp for displaced people in Darfur, the conflict-riddled region in western Sudan, according to witnesses and leaders at the camp.

As Democrats Take the Stage, GOP Prepares to Respond

In a modern production studio about a mile from where the Democrats were opening their convention here Monday, a SWAT team of Republican operatives dispatched to crash Sen. Barack Obama’s party was reveling in its accomplishments.

One Moment in Time

Someone once said that a movie endowed with five unforgettable scenes is a classic. As the most anticipated event of 2008, the Beijing Olympic Games captivated the world with many moving and magical moments. Each second was a motion picture packed with life and passion. Thus, I had a hard time figuring out where to start after my friends asked me to write an article about this monumental event.

Is This a ‘Daddy’ election?

Two months ago, it looked like the McCain camp was in shambles. The Arizona senator was struggling to read from a teleprompter, giving speeches in front of garish green backdrops, and standing behind podiums that made him look small and awkward. His campaign organization was muddled, full of deadweight managers who lacked the skills to play in the big leagues, but whom the senator didn’t have the heart to fire. And instead of moving to the center, as most candidates do in the general election, McCain, if anything, was moving to the right. In national polls he was only behind by four points, but with the enthusiasm gap, the fundraising numbers, and the dismal condition of the Republican brand, pundits were confident that John McCain was well on his way to a crushing defeat in November.

Orientation is a wonderful and exhilarating time to be on campus. Representatives from the many diverse segments of the MIT community — from living groups to student activities, athletics teams and learning communities — are part of the process of showcasing this amazing place to the incoming class. Since this is my sixth year on campus participating in orientation, I can tell you that no year’s events are ever quite the same — there are always new things to discover. In fact, there seem to be so many sessions, events, demonstrations and parties that it can sometimes seem completely overwhelming.

<i>Editors Note: This column is part one of a four part series about rounding the proverbial bases.</i>

As I was driving up to Boston from my home in New York for the last time this past Saturday, I remembered my orientation at MIT. For a second I panicked, because it seemed like I had grown up in the span of a second. I now live in an apartment on Beacon Street with a set of pots and pans, a full-sized bed, and a utilities bill — the stuff of old age, or at least the mid-twenties. What if I woke up tomorrow and I was forty years old? 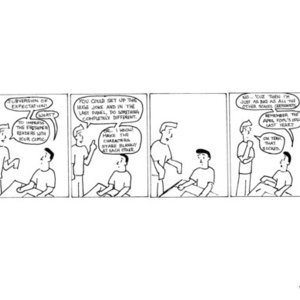 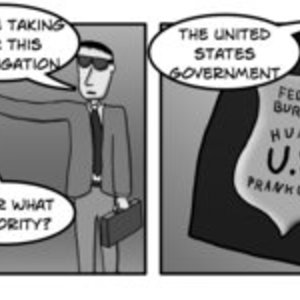 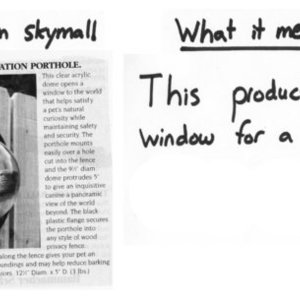 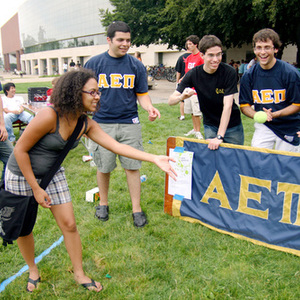