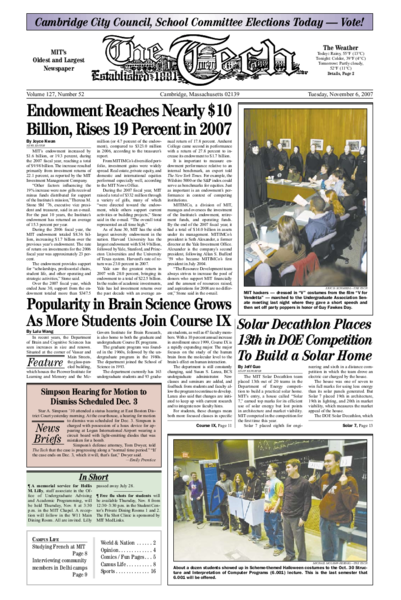 Star A. Simpson ’10 attended a status hearing at East Boston District Court yesterday morning. At the courthouse, a hearing for motion to dismiss was scheduled for Dec. 3. Simpson is charged with possession of a hoax device for appearing at Logan International Airport wearing a circuit board with light-emitting diodes that was mistaken for a bomb.

MIT’s endowment increased by $1.6 billion, or 19.3 percent, during the 2007 fiscal year, reaching a total of $9.98 billion. The increase resulted primarily from investment returns of 22.1 percent, as reported by the MIT Investment Management Company.

The MIT Solar Decathlon team placed 13th out of 20 teams in the Department of Energy competition to build a practical solar home. MIT’s entry, a house called “Solar 7,” earned top marks for its efficient use of solar energy but lost points in architecture and market viability. MIT competed in the competition for the first time this year.

In recent years, the Department of Brain and Cognitive Sciences has seen increases in size and renown. Situated at the corner of Vassar and Main Streets, the glass-paneled building, which houses the Picower Institute for Learning and Memory and the McGovern Institute for Brain Research, is also home to both the graduate and undergraduate Course IX programs.

A memorial service for Hollis M. Lilly, staff associate in the Office of Undergraduate Advising and Academic Programming, will be held Thursday, Nov. 8 at 3:30 p.m. in the MIT Chapel. A reception will follow in the W11 Main Dining Room. All are invited. Lilly passed away July 28.

Israeli and Palestinian Officials Say They Hope for Accord Soon

Hollywood writers took to the sidewalks, if not quite the streets, Monday, as last-ditch bargaining failed to avert the first industrywide strike in more than 19 years.

Twice before has Hurricane Noel spun across the open waters of the North Atlantic, but the Noels of 1995 and 2001 were only storms for the fish as neither threatened any land mass. Hurricane Noel of 2007 proved much different and will likely be the most fatal of this year’s Atlantic hurricanes as it inflicted parts of Hispanola with 20 inches (50 cm) of rain, causing devastating mudslides.

President Bush on Monday urged Gen. Pervez Musharraf, the Pakistani president, to hold elections and give up his army post “as soon as possible,” but gave no indication that the general’s imposition of emergency rule would bring about any significant change in American policy.

Pressured by regulators, the German pharmaceutical giant Bayer AG announced on Monday that it had agreed to withdraw the controversial heart surgery drug Trasylol after a Canadian study suggested that it increased death rates.

President Bush pledged Monday to increase intelligence cooperation with Turkey in its fight against Kurdish rebels, hoping to head off any significant Turkish military operation in Iraq.

The circulation declines of American newspapers continued over the spring and summer, as sales across the industry fell almost 3 percent compared with the year before, according to figures released Monday.

In response to Ali S. Wyne’s Nov. 2, 2007 letter to the editor, “On Intellectual Imprisonment”: 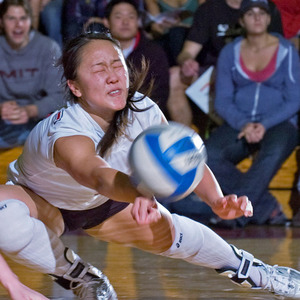 The MIT women’s volleyball team earned an at-large bid to the National Collegiate Athletic Association Division III tournament, despite losing in the finals of the conference tournament Saturday. Tech, the host for this weekend’s NCAA New England Regionals, plays its first regional match on Thursday night at 8:30 p.m. in Rockwell Cage.

MIT students might not know it, but the greatest goal scorer in the Institute’s soccer history walks among them.

The 2007 campaign for MIT water polo came to a close on Sunday afternoon, as the Engineers went 2-1 over the course of the weekend to secure a fifth-place finish at the Collegiate Water Polo Association Northern Division Championships.

Being an industrious little beaver, I held down two jobs the year before graduate school. By day, I was a lab rat, fearlessly pipetting small volumes of liquid back and forth. By evening, and on the weekends, I worked on a horse farm in rural North Carolina. They were essentially the same job; all you had to do was replace “pipetting, small volumes, and liquid” with “shoveling, large volumes, and poop.” 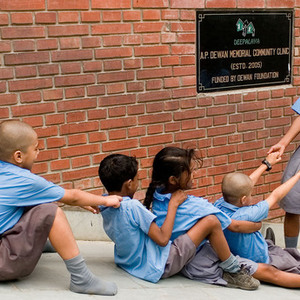 I became so comfortable in India that I began to feel as if I had been there for a long time. In reality, my time sped by. I became close to both the Indian and MIT students in the group and loved our conversations. Besides documenting the students’ work, I had the opportunity to help them with theirs, eventually becoming a part of the community and project. The other MIT students and I really got a chance to immerse ourselves completely in the Indian culture.

Once upon a time, I had no problem whatsoever getting up at 5 or 6 in the morning before heading to school. Obviously, I generally didn’t get much in the way of rest that way, but that was during a time when I would prefer being able to eat my Lucky Charms without having to rush out the door. Plus, I also got the chance to see some very lovely sunrises.

I came to MIT to study math. Surprise. Modern math doctoral programs enforce the study of a foreign language. This is because there are significant intellectual contributions written in other languages, especially French, German, and Russian. In this regard, I am fortunate I chose MIT, since they only enforce the study of one foreign language while other schools like Berkeley and Princeton require two. To my Canuck counterparts from Québec, a French requirement is a welcome amusement. For me, French is a torment. Once a forgotten part of my past, this language has been awakened from the grave, seeking revenge from many moons ago.

Deepalaya students use a ramp outside their school as a slide during break. Deepalaya is a non-governmental organization that provides education to children, especially female students, from economically and socially ...
Christina Kang—The Tech

Outside hitter Rose Zhong ’08 digs the ball during the second game of MIT’s 3-0 semifinal win against the U.S. Coast Guard Academy on Friday afternoon in Rockwell Cage. MIT lost the championship match the next day aga...
David M. Templeton—The Tech 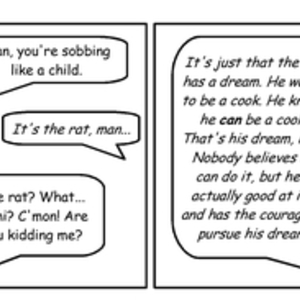 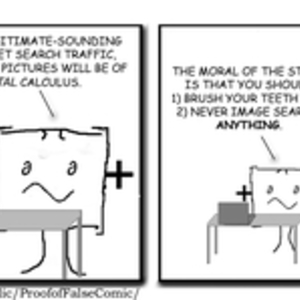 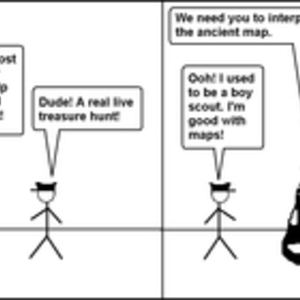 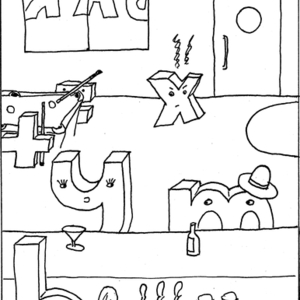 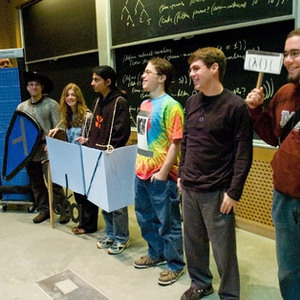 About a dozen students showed up in Scheme-themed Halloween costumes to the Oct. 30 Structure and Interpretation of Computer Programs (6.001) lecture. This is the last semester that 6.001 will be offered.
Michael McGraw-Herdeg—The Tech 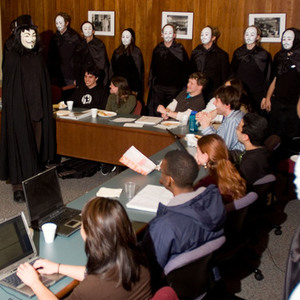 MIT hackers ­— dressed in “V” costumes from the film “V for Vendetta” — marched to the Undergraduate Association Senate meeting last night where they gave a short speech and then set off party poppers in honor of Guy ...
Eric D. Schmiedl—The Tech 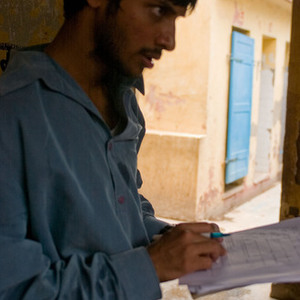 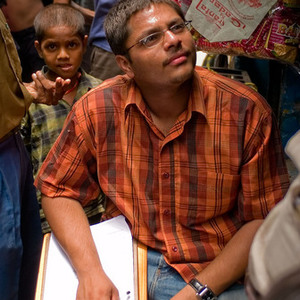 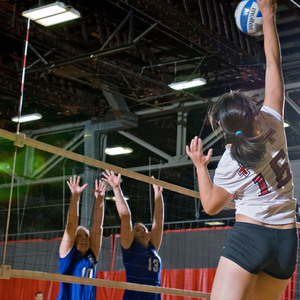